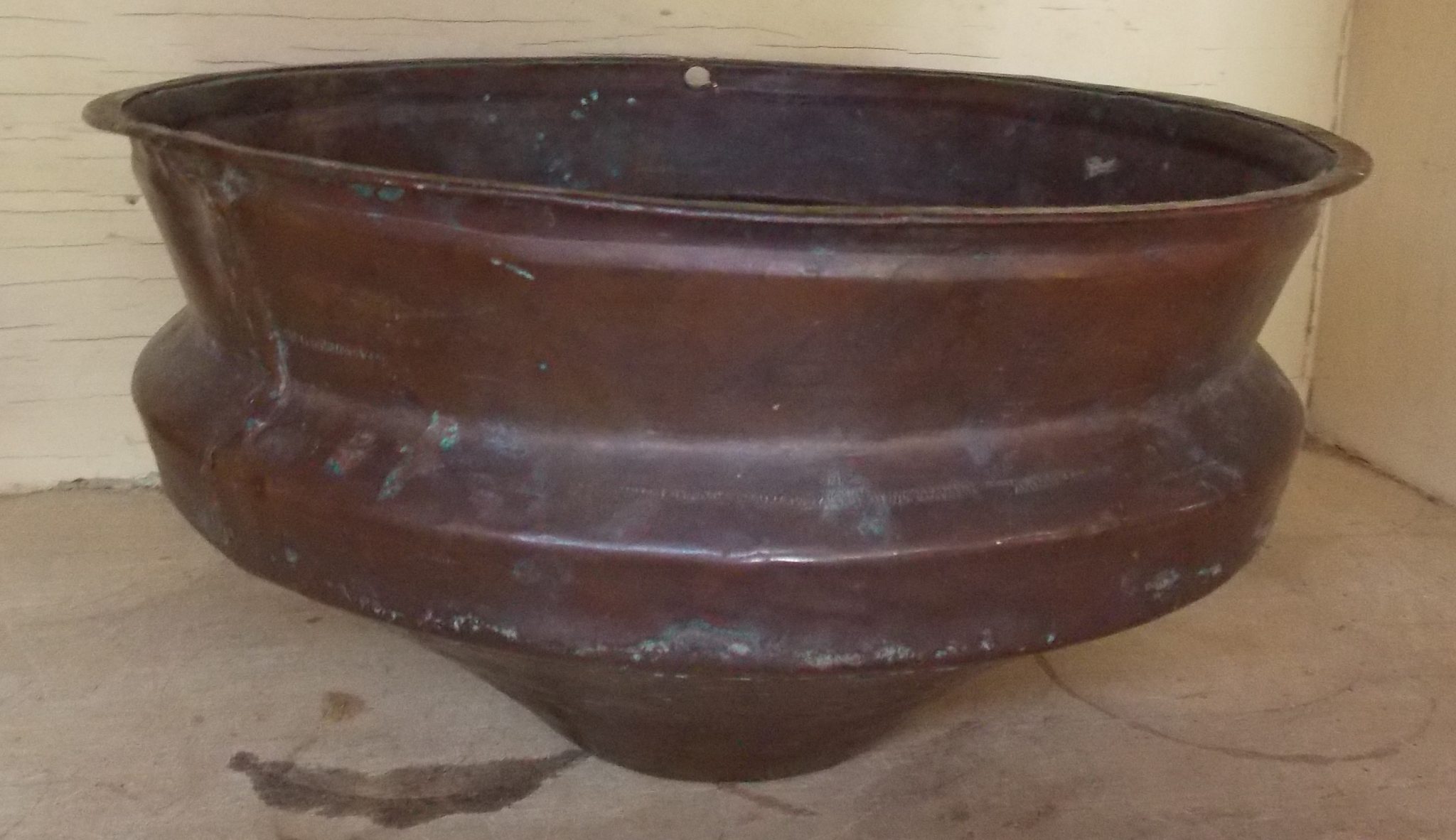 A few months before last February’s National Arts and Crafts Conference at the historic Grove Park Inn, I asked David Rudd, co-owner with his wife Debbie Goldwein of Dalton’s American Decorative Arts in Syracuse, NY, if he would lead one of our daily Small Group Discussions entitled “What Is it? Your Unmarked Mystery Pieces.”

I promised to start the conversation with a piece of my own: a hanging copper planter with a suspicious Roycroft mark shown below. 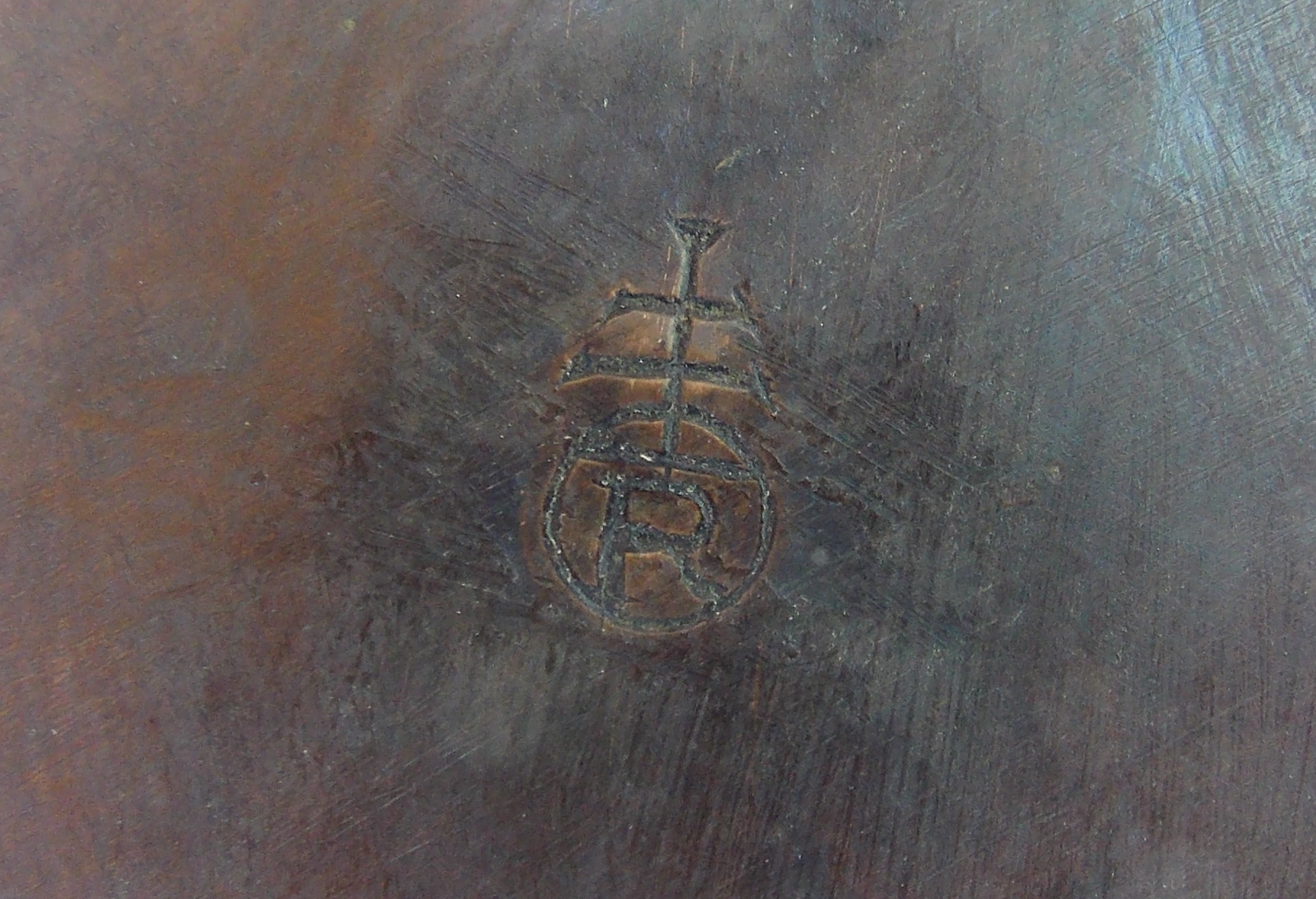 I had found this copper planter in a Raleigh flea market nearly thirty years ago. Even without an additional thirty years of experience, back then I was skeptical that it had really come from the Roycroft Copper Shop. And while I can’t recall how much it cost, it must not have been much.

The Roycroft Copper Shop created their first two marketable pieces in 1906, a pen tray and letter opener, each with an almost crude Roycroft shopmark. Soon after that Karl Kipp arrived, took charge of the fledging Copper Shop, and immediately created a more sophisticated shopmark that was clearly stamped into each piece emerging from their workbenches.

While I never convinced myself that my planter had been made by the Roycrofters, each time I came upon it on a shelf in my storage room, I did wonder if perhaps it had been a practice piece hammered out by an inexperienced East Aurora apprentice.

Wishful thinking, as it turns out. 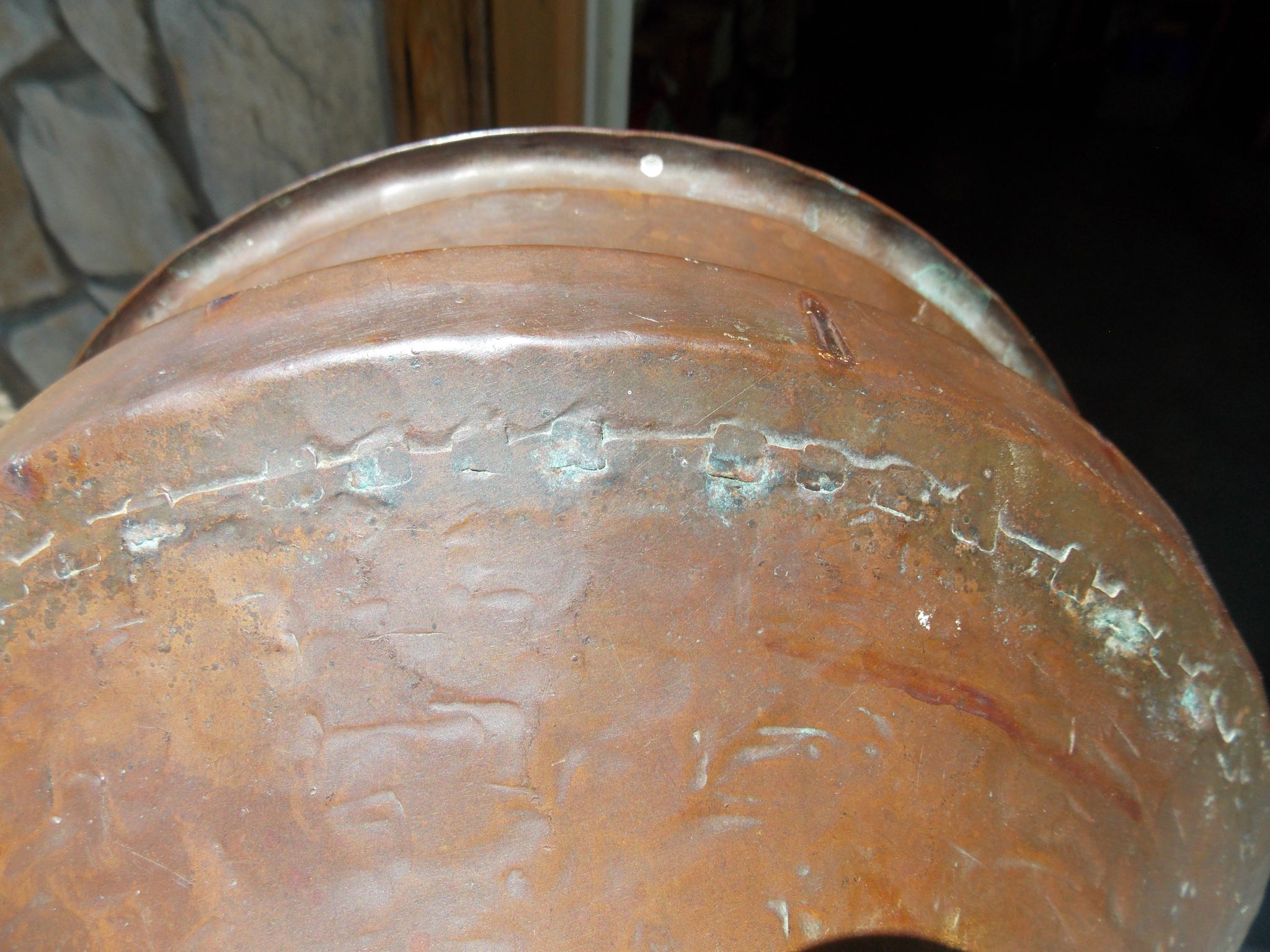 Anyone with even rudimentary experience handling examples of Roycroft copper would recognize that the hammering style, planishing marks, and the seam techniques were all non-Roycroft, not to mention the drippy soldering.

So, who made this copper planter, and how did it end up with a Roycroft mark?

My theory is that the copper planter was made by a student in a manual arts class during the Arts and Crafts era, but that the crude Roycroft mark was added not long before I found it. 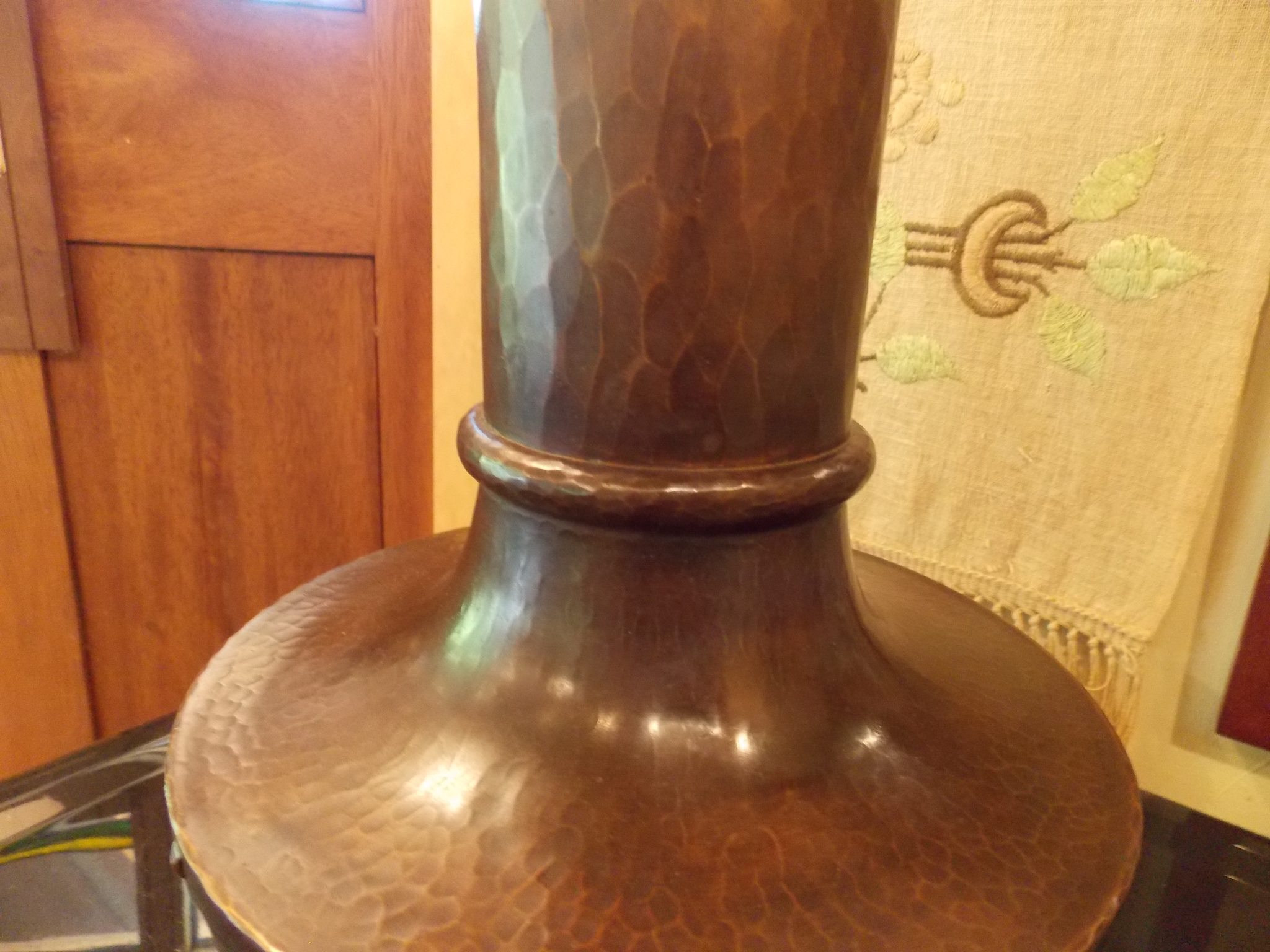 (Here is a better example of authentic Roycroft hammering.)

The lesson to be learned from my copper planter is that any antique should be evaluated and identified by its design, construction and decorative elements, and not by a shopmark which can easily be faked.

As for my copper planter, before leaving the Grove Park Inn I asked David Rudd what he thought I should do with it.

His advice was simple: “Put a plant in it.” 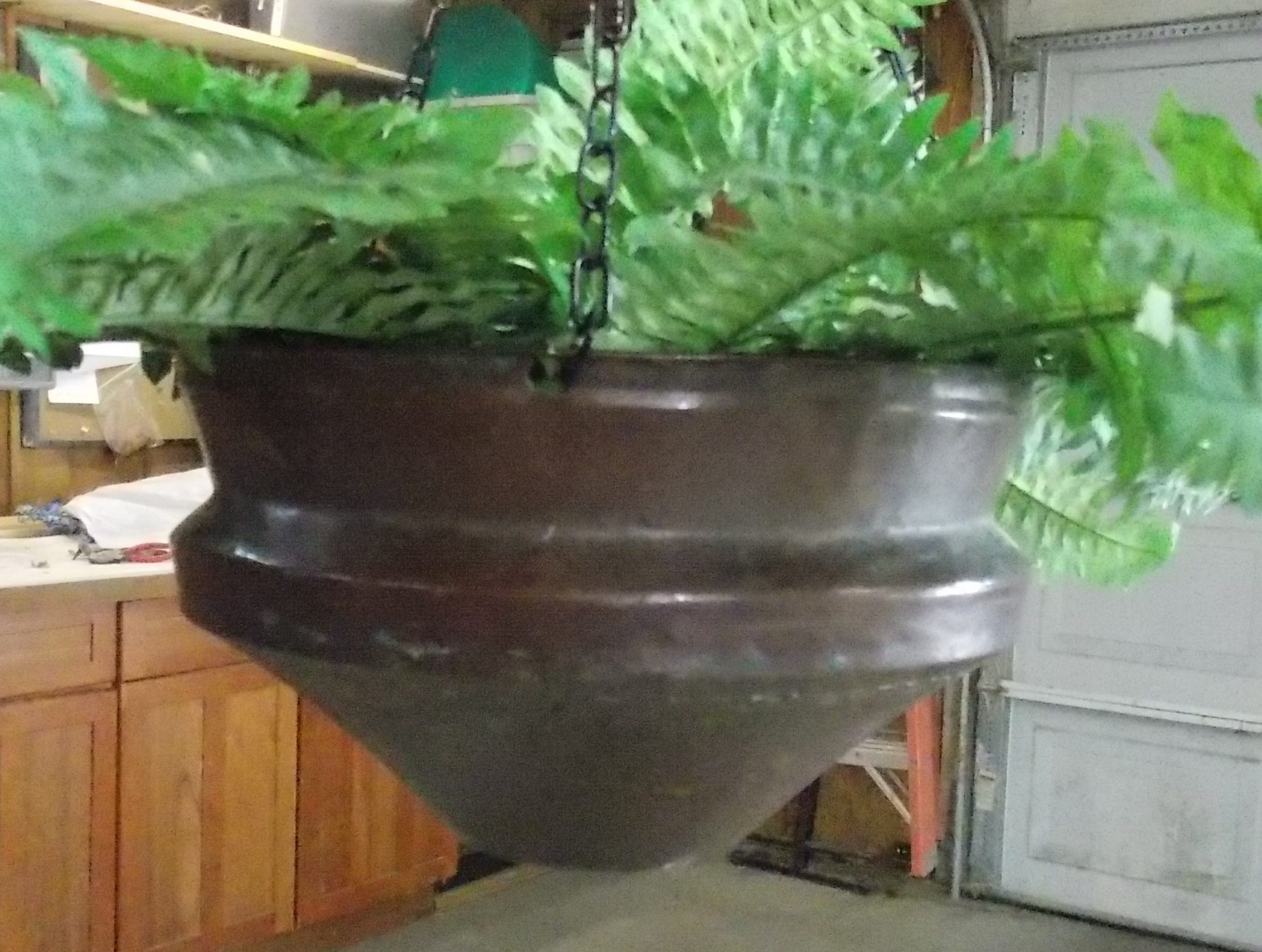 (But its an artificial fern….) 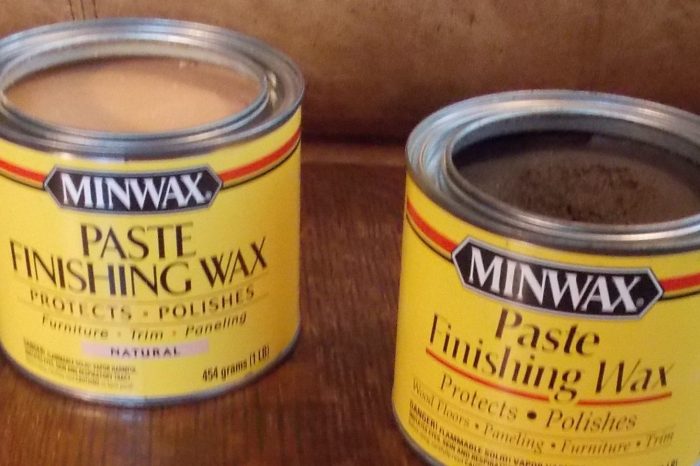 Which Is Best: Wax, Polish or Oil?