A Shock at Sotheby’s: A Grueby Vase Sets A Record 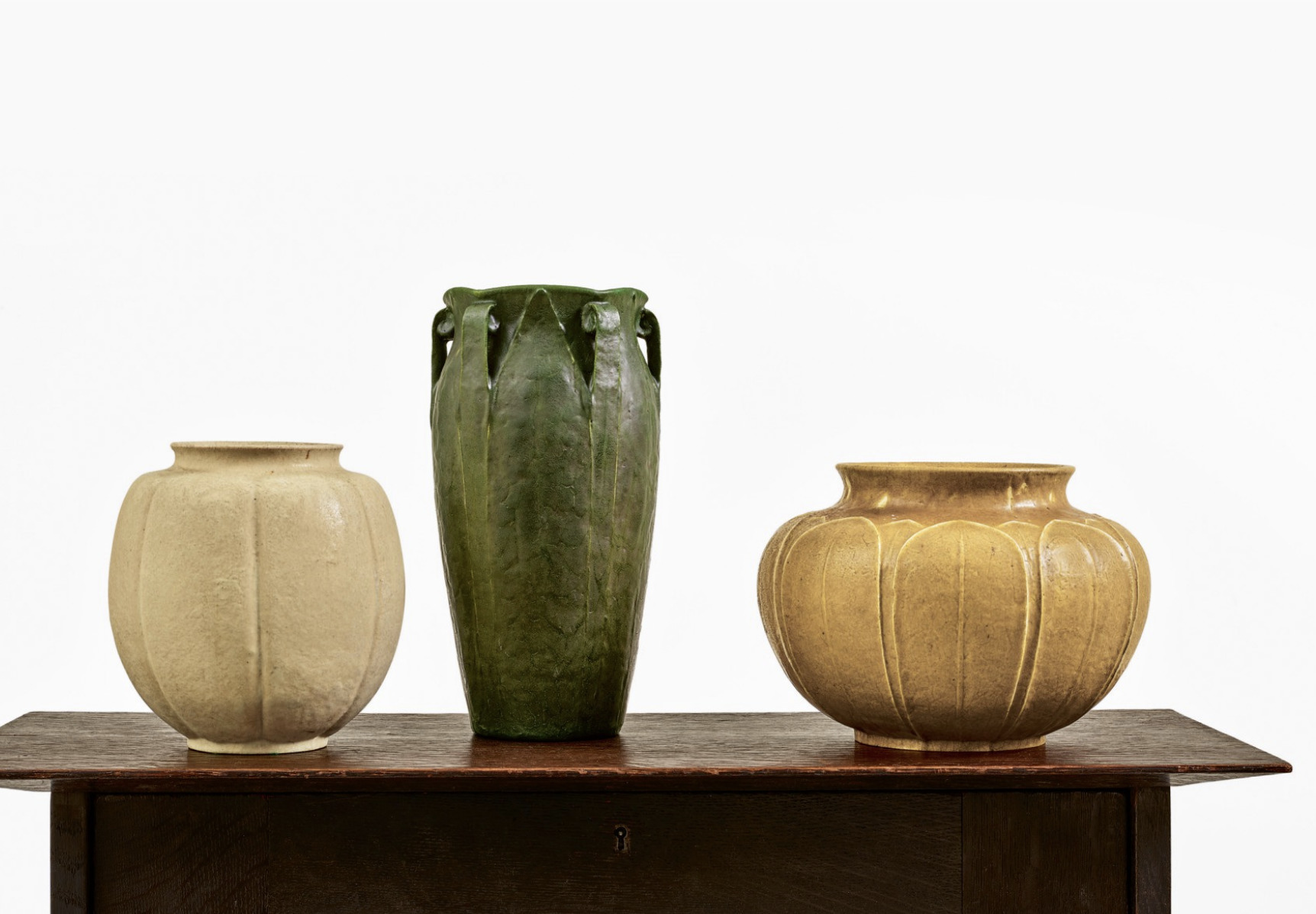 A Shock at Sotheby’s: A Grueby Vase Sets A Record

It was a small vase in a trio of Grueby Pottery, one website called it “unassuming.” Granted, it was a work highlighted in an Important Design auction put on by auction powerhouse Sotheby’s with a pre-sale estimate of $7,000 – $9,000 and according to the description, it was a glazed earthenware vase – 6.75 inches high – with the firm’s impressed mark and the original paper label. Its condition report showed the work as having “wonderful abstract floral patterns enhanced by superb variegated shades of ochre” and “a charming and robust form with rich glaze.”

So was it a complete surprise that after a 45-minute bidding war, the little Grueby vase sold for an attention-demanding $431,250? (The final price includes a buyer’s premium charge.) Meanwhile, the previous lot, a green “Fern-Handled” vase 10.75 inches high, also a work of Grueby, blazed past the $12,000 high estimate to sell at $72,500 (also including the buyer’s premium), but it’s the earthenware vase that had collectors talking after. 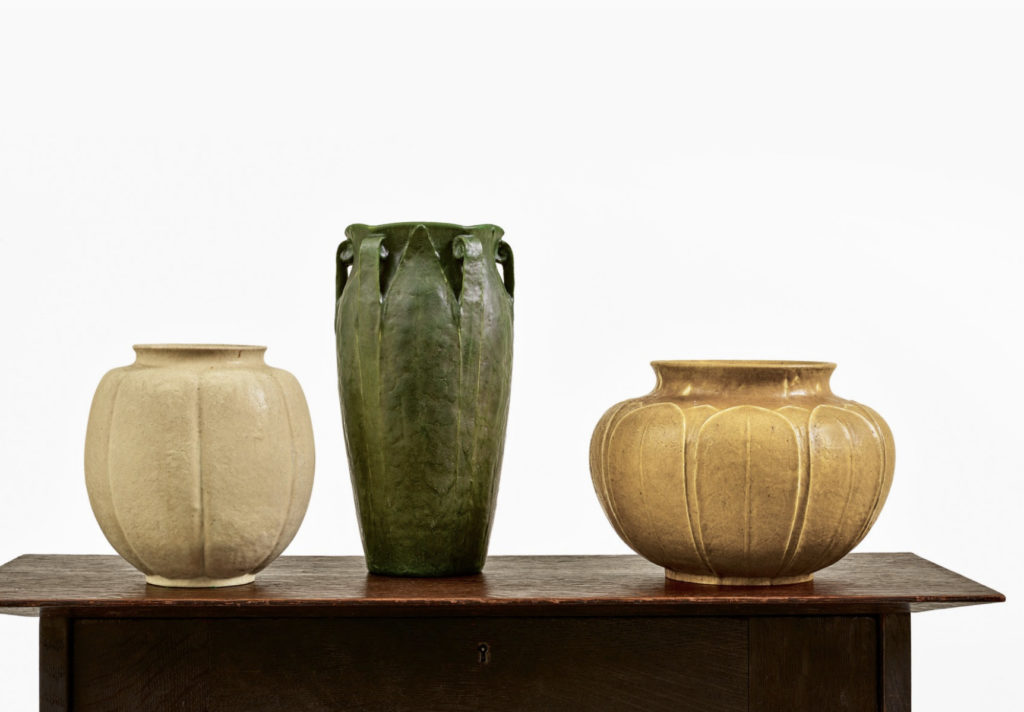 Three Grueby vases were up for bid at last month’s Important Design auction at New York’s Sotheby’s auction house. The green vase in the middle sold for an impressive $72,500, while the earthenware vase on the right sold for an astounding realized price of $431,250. Photo courtesy of Sotheby’s of New York. 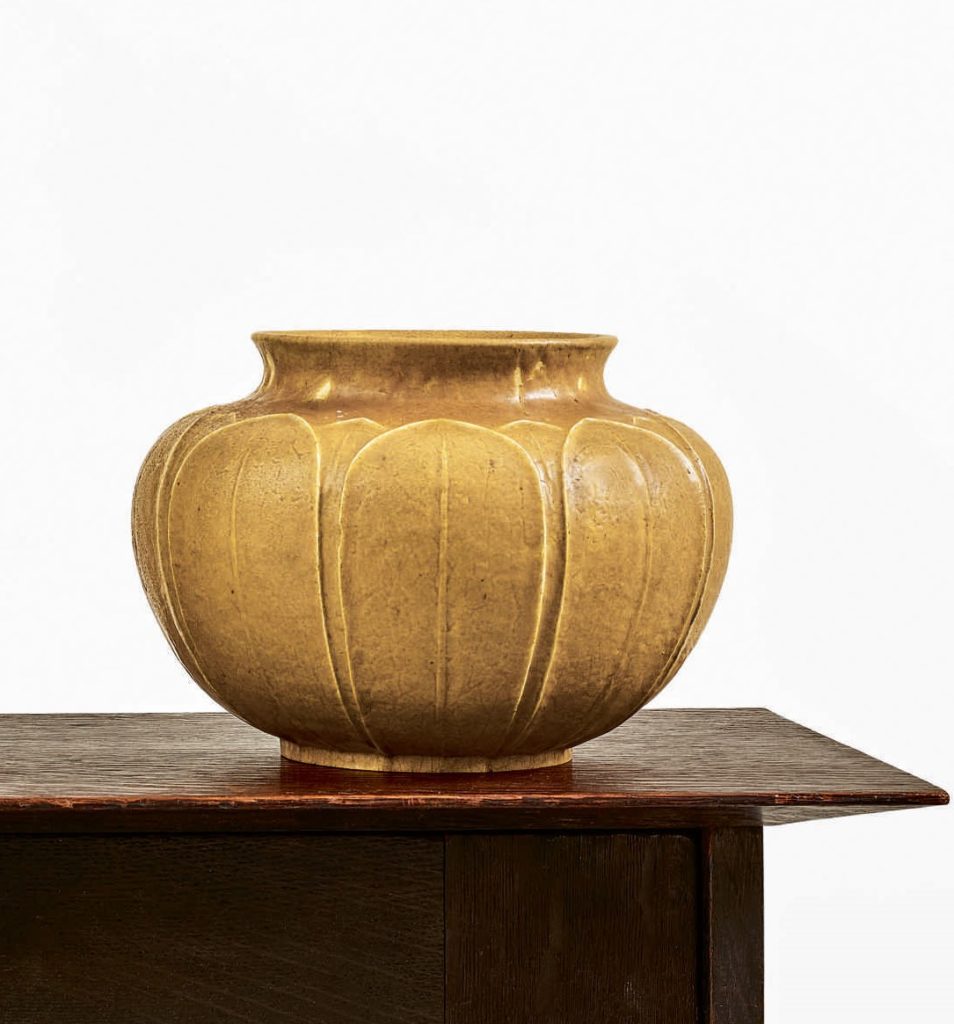 Even with the realized price of $431,250, the sale of this earthenware Grueby vase on the July 30th Sotheby’s Important Design auction broke an all-time record for a work of Grueby Pottery. Photo courtesy of Sotheby’s of New York.

Following the auction, a representative for Sotheby’s said, “The work exhibits a highly unusual and rare glaze coloration for Grueby pottery, with terrific proportions and crisp modeling, which helped drive the intense competition between at least two collectors. It is unlikely that another work with this particular glaze coloration will be discovered.” The Robb Report, a website dedicated to the luxury lifestyle, also detailed in an article about last month’s Important Design auction “This particular piece is notable for its unique glaze, different from other Grueby pieces.”

The Boston-area firm has a history of creating attention around their glazes. The glazes that would distinguish Grueby’s works from other similar pottery firms included yellow, brown, blue, and white — and the popular matte Grueby green. Occasionally, according to the Official Price Guide to American Arts and Crafts by David Rago and Bruce Johnson, a work with more than one color of glaze have “…risen to become the most sought-after of all the Grueby designs.” In addition to sporting multiple colors, vases with detail and attention to added nature-inspired embellishments or handles which add to the work’s form may attract more attention than their non-embellished counterparts.

Rago, an authority on American ceramics and art pottery as well as a regular contributor to the popular PBS series Antiques Roadshow, observed in his book The Arts & Crafts Collector’s Guide: “I don’t believe a pot has to be large to be fine or great.” Rago continued, “One of the most memorable pieces of Grueby I’ve seen was small, green, and minimally decorated. It has a presence, derived from perfect proportions, exemplary glazing, and a light decorative hand.”

For those of you wondering whether or not this particular sale was a fluke, consider the following: In a Modern Design and Art auction put on by Bonham’s in April of last year, a vase identical in composition and color sold for $5,075.

The first lot of a Modern Design and Art Auction at Bonham’s in April of 2019, a visual match to the vase that sold for $431,250 last month. The vase above sold for $5,075. Screenshot taken from Bonhams.com.

As a wise man recently said, “It just goes to show if you have two determined collectors bidding at auction, nothing is entirely predictable.”

This article was updated August 19th, 2020 to correct the quote that Sotheby’s had given. 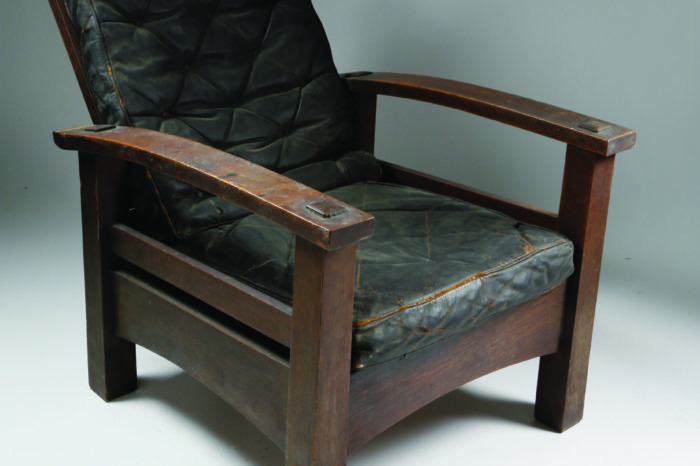