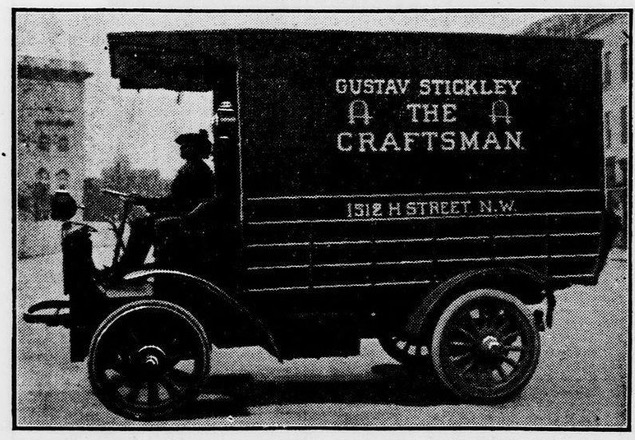 And not even Gustav Stickley was immune to lawsuits.

In the spring of 1915, there were no fewer than five lawsuits filed over the furniture inside Gustav Stickley’s Washington, D. C. retail store he called The Craftsman.  The first lawsuit was filed for over-due rent, which resulted in United States marshal Splain seizing the store’s stock in order to conduct a public auction. A second suit was filed the next day by another United States marshal, this one from New York, who had been assigned to preside over the corporate bankruptcy of Gustav Stickley’s company. He subsequently was granted control of the store’s assets. 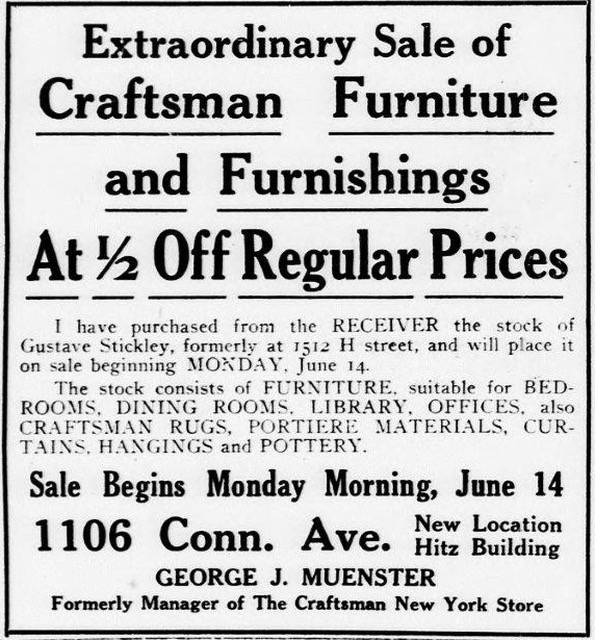 This prompted a third suit, this one filed by U.S. marshal Splain, who then was given temporary control over the Stickley furniture inside the D.C. store. Just as quickly, the second marshal filed two more suits, arguing that by operating Gustav Stickley’s business, he could realize enough revenue to satisfy Stickley’s back-rent issue and raise funds to pay back the company’s creditors. The court then re-awarded him custody of the furniture and in just 30 days of operation he increased sales at the D.C. store from $625 to $5,705!

These are some of the fascinating tidbits of information I have learned while researching and writing about the store which Gustav Stickley had opened in 1912 in Washington, D.C. I’ve also uncovered the store’s phone number, details of the merchandise sold, the delivery services used, the store manager’s identity and salary, and even where Gustav Stickley stayed when he came to check on the store.

What I haven’t discovered, and this is where I need your help, are images of the store.  The Craftsman store was located at 1512 H Street in northwest Washington, in the Wilkins building, from October 1912 through May 1915. My research at the D.C. Historical Society, the Library of Congress, the National Archives, the Winterthur Library, and various newspaper archives has revealed only a stock image of the building taken in 1924.

I would be very grateful if anyone with information about the store or possible sources of photographs of it would contact one of us:

Note:  A significant archive of many of the articles, images, records, and lawsuit filings I have uncovered can be viewed on our project’s blog at www.stuswoodworks.com/ssp 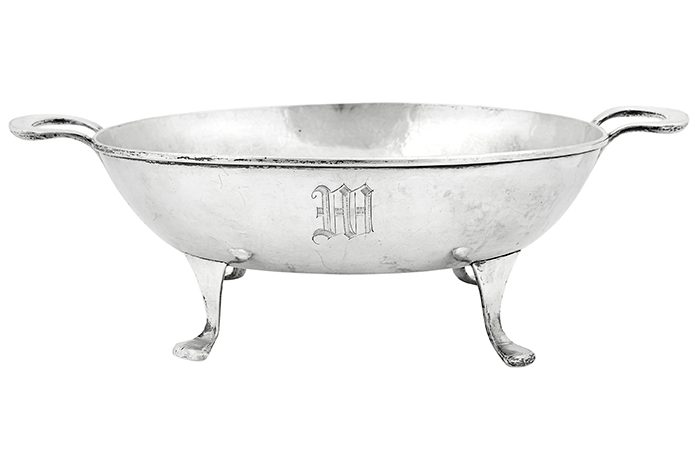