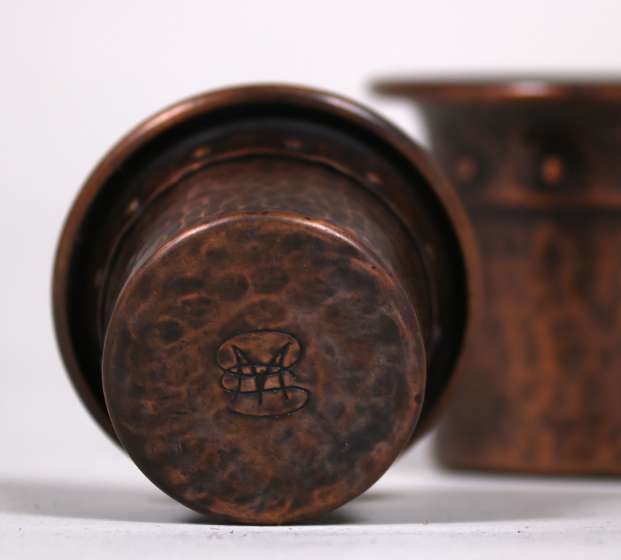 Those familiar with Syracuse, New York are aware of its legacy in the Arts and Crafts Movement as the city became an important manufacturing center during the heyday of the movement in the early 1900s. In addition to Syracuse being home for the iconic Gustav Stickley, Stickley’s Craftsman Workshops, the L & J.G. Stickley Company and the pottery of Adelaide Robineau, Syracuse was also home to the Onondaga Metal Shop, a small business specializing in copper and iron decor before assimilating into another manufacturing firm to become Benedict Art Studios. Even though the Benedict Studios used many of Onondaga’s many designs, works from both studios had their differences.

Onondaga Metal Shop was located in downtown Syracuse at 581 South Clinton St. and organized in 1905 by Edward C. Howe, the son of a local jeweler. The small shop produced hand-wrought copper and iron accessories in the Arts and Crafts style, creating hand-hammered copper, brass lamps, and trays. From studying works made at the Onondaga Metal Shops, particularly this charger, researchers from the Metropolitan Museum of Art in New York believe former employees from Stickley’s Craftsman Workshop or artisans familiar with Stickley’s processes must have passed on their knowledge at Onondaga since those works are very similar in style. While the company experienced initial growth, the bills piled up and Howe walked away from the company, leaving the company in the hands of the shop supervisor who had little choice but to file for temporary bankruptcy.

At the same time, the M.S. Benedict Manufacturing Company had been producing works in East Syracuse since 1894. Benedict’s works were primarily manufactured in silver and gold plate and the works consisted of metal décor and novelties including clock cases, desk sets, hollow ware and more. In 1906, Harry L. Benedict, son of the founder and new owner of M.S. Benedict Manufacturing, purchased Onondaga Metal shops, due to Benedict’s desire to expand their designs to include Arts and Crafts, a style that was steadily gaining popularity. The metal shops were renamed Benedict Art Studios and specialized in fine copper, iron and brass works with an artistic influence.

There are several differences between Onondaga’s works before the move to join Benedict Manufacturing Company and the works after joining. Onondaga Metal works preferred using copper and iron, rarely using brass, while Benedict studios works are often a mixture of brass and copper. According to David Rago’s Arts and Crafts Collection Guide, Onondaga’s originals “show a finer, more subtle handling of the metal, where Benedict pieces often bear deliberate, deep hammer marks.” Works from Benedict Studios additionally have heavier brass handles on trays and lids or delicate brass handles on copper candlesticks, according to David Rudd, a leading authority on Onondaga Metal Shop.

Rudd additionally observes differences in the methods of production between the workshops. “Examining the planishing of the three companies, we can see that the work of Stickley and (Onondaga Metal Studios) has a more subtle, less intentional production method than the deliberate deep hammering marks of Benedict,” says Rudd. “OMS and Stickley seem to let the forming of the piece dictate the hammering marks, with few hammering marks put in intentionally to decorate the piece beyond the marks needed to actually produce the object.”

While works from the two different versions of the company used the same forms, Onondaga used iron if a second metal was needed. The Onondaga Metal Shop shopmark can be found underneath a work with the initials layered over each other. The mark changed after the name did; the shopmark was changed after becoming Benedict Studios to the image of a hammer and an anvil – and later still, changed to a diamond with a bee in the center. 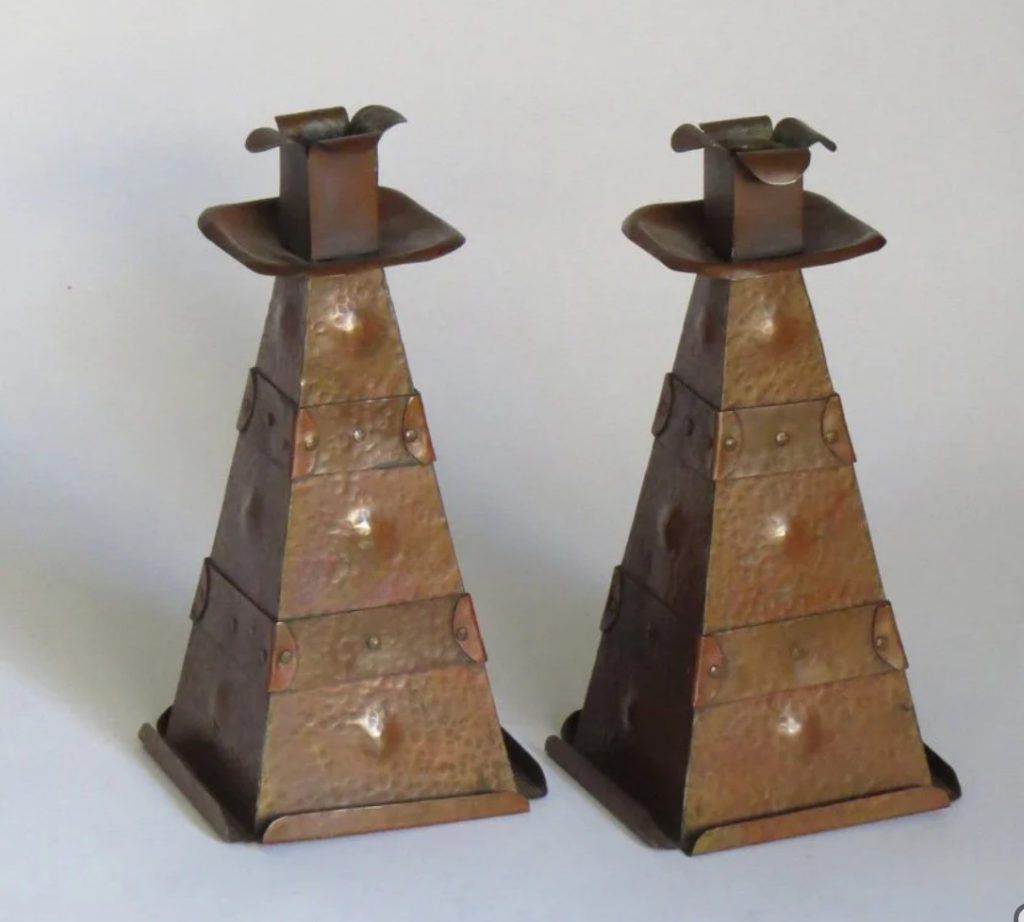 While the Benedict Art Studios works focused on the production of hand hammered copper and brass wares using Onondaga’s designs, it was the latter company that closest resembled the methods and represented the Arts and Crafts Movement and were often compared to Stickley’s workshops as well as the british influences of the movement.

For a closer look at the differences between Onondaga Metal Studios and Benedict Art Studios, check out the following links: 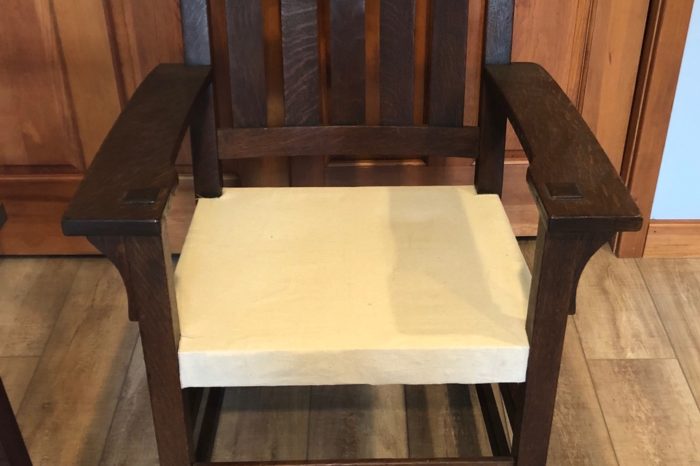