This article has been republished and edited to reflect correct information for 2020’s workshop listed at the end. Original date of publication: January 15th, 2019.

Whenever we start planning our Pre-Conference Workshops, the excitement always begins when chatting with our dependable instructors, who truly pass on their legacy and take time to educate those interested in making their own Arts & Crafts inspired masterpiece. The “Head, Heart and Hand” philosophy known to those in the Arts & Crafts Revival community will be alive and well at the National Arts & Crafts Conference, which will start on the 21st – in a couple weeks – and feature instructors teaching about Printmaking, Coppersmithing, Embroidery and Metalsmithing.

The skill of metalsmithing will be taught by Ron Van Ostrand, a Roycroft Renaissance Master Artisan in metal, and an art teacher with two decades of teaching experience. He has been a seminar presenter on Art Metal techniques twice in recent years at the Conference. It’s safe to say that Van Ostrand is one to know if you intend on learning how to work with metal or if you’re looking for a new skill to acquire to utilize and make a masterpiece of your own.

Van Ostrand co-founded the “VanOstrand Metal Studio” with Dawn Raczka after graduating from the Metals Program at the State University of New York at Brockport in 1997. He moved the studio to Holland, New York – where he could teach in the neighboring community of East Aurora, New York. His designs are influenced by early 20th century Roycroft metalwork and also considers Japanese culture and nature an inspiration in his work. Last year, he began construction of a 1720 sqft studio in East Aurora – the home of all things Roycroft.  Ron Van Ostrand took time out from his schedule to answer a few quick questions about where he started out, what he loves about the Arts & Crafts Movement, and what he sees in the new generations of artists and makers.

Arts&CraftsCollector: How did you get started in the business?

Ron Van Ostrand: While an undergraduate I had the pleasure of working in the studio of my professor Thomas Markusen. The experiences there laid the foundation for my own studio. Tom was a remarkable mentor not just in metal work, but also the aspect or running a business.

A&CC: What do you love most about the Revival of the Arts & Crafts Movement?

RVO: I love to see how modern artist have adapted arts and crafts themes to modern living. Forms have evolved in response to new functions, yet the feel of the original movement shines through. 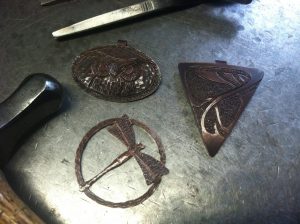 A&CC: What appeals to you about metalworking?

RVO: I like the way that metal matures over time. As people interact with jewelry or art metal some edges may soften and a metal’s patina may evolve. Metal can be pushed around, cut away, or fused together.

A&CC: Tell me about one project you are particularly proud of.

RVO: Hands down the Roycroft Inn clock that I produced all the metal details for is my proudest accomplishment. The clock was a joint effort with Howard Lehning in which we took design elements of the inn itself to create the 7’ grandfather clock that now stands in the inn.

RVO: The metal arts and jewelry has been going strong for several millennia so five years is shorter than a blink, I doubt much will change in that time for the medium. But for me? (Last year) I built a 1720 square foot studio by hand in between my home and geodesic dome greenhouse (also built from scratch) in East Aurora. In five years from now I would like to see regular classes being taught there. The studio still needs some finishing touches to the interior spaces, but five years hopefully will be enough to realize the full vision I have for it. 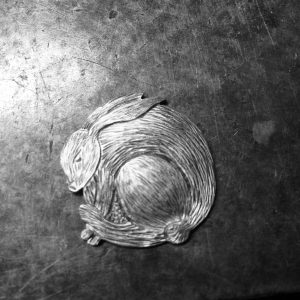 A&CC: What do you see in the upcoming generation of metalworkers? Any differences?

RVO: For a while, I have been concerned that with schools embracing technologies that there was a growing loss of the hand-skilled crafts. There are still students that are interested in creating things by hand, but there has been a noticeable loss of programs at the high school, and to some extent the college level. Sadly, Gone is the era of the normal school. For my part, I offer my knowledge whenever I can.

A&CC: What are you looking forward to most at the National Arts and Crafts Conference?

RVO: Meeting up with old friends and meeting new ones that have the same passion for the Arts and Crafts Movement is what I most look forward to each year. I also look forward to new insights and perspectives that are revealed during the seminar presentations.

Ron Van Ostrand can be seen at the Omni Grove Park Inn, conducting his own workshop on Friday, February 21st from 8 A.M to 11 A.M at the Grove Park Inn during the National Arts & Crafts Conference. “Small Art Metal Workshop” will be a “hands on” workshop designed to introduce students to tools and techniques used in the production of art metal objects and jewelry.

Students can expect to learn how to implements techniques like chasing, repoussé, stamping, sawing and hammering in order to create craft keychains, pendant drops, and other small metal objects or jewelry through Van Ostrand’s knowledgeable experience and demonstrations. Students are encouraged to take projects in their own direction or to follow the instructor’s example. Each student will leave with at least one completed project. All materials will be provided, however tools provided will remain property of the instructor.

Only a couple spots are left! To sign up for Ron Van Ostrand’s workshop, call Bruce Johnson’s (Director of the National Arts & Crafts Conference) Office at (828) 628-1915.

To learn more about Ron Van Ostrand and his work, you can visit his website at www.ronvano.com 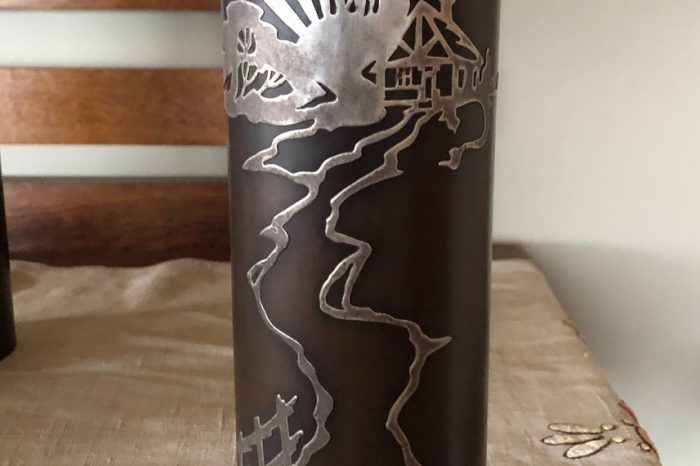