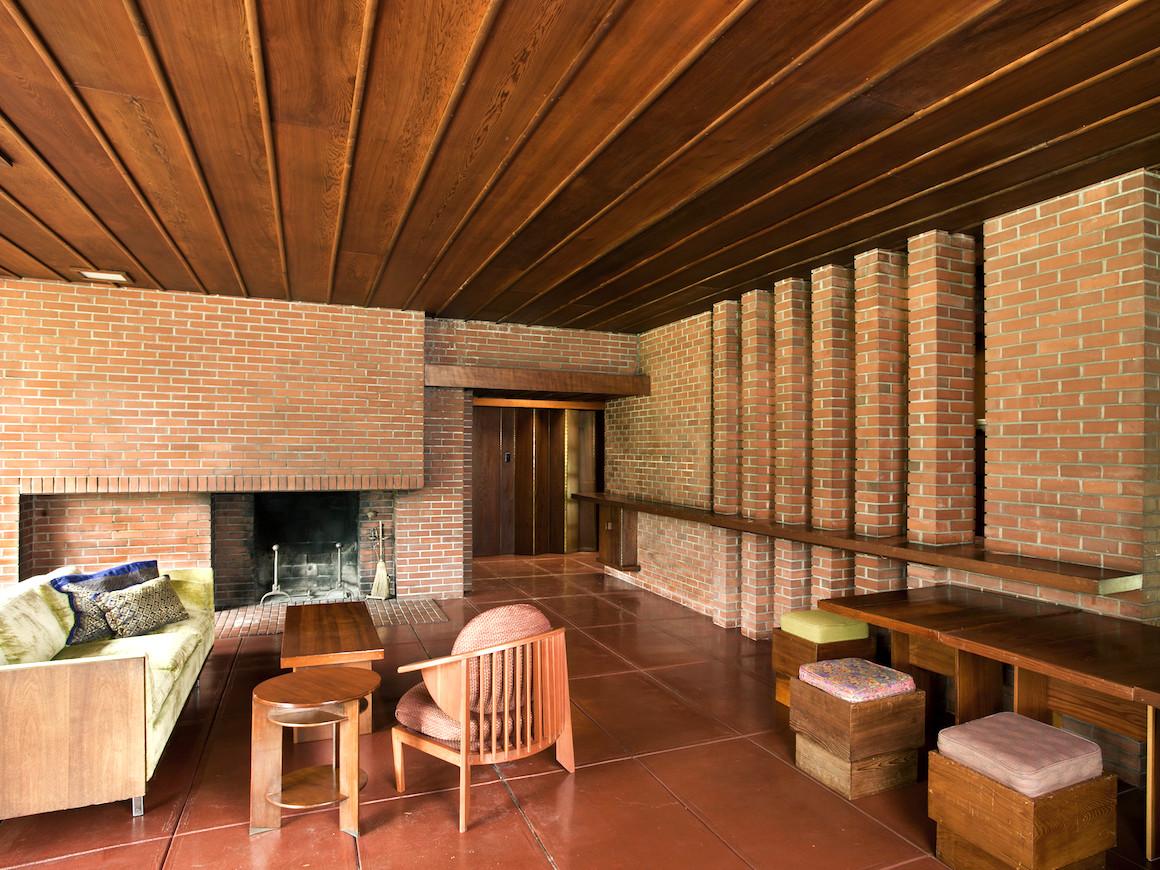 The Buckeye state — home to Rookwood Pottery, Cowan Pottery, the Cincinnati Union Terminal and Dard Hunter’s house and archives among other notable names — contains a wide array of architectural styles from Arts and Crafts to Art Deco to Greek Revival and many others. While the state has long been visible for its legacy in developing American art pottery firms in the early 20th century, tourists can easily see that some cities like Cleveland have a history in their streets. Ohio’s tourism organizations are shining the spotlight on a number of important buildings as their exteriors and interiors are prime candidates for architectural study. Much of the grand architecture in Ohio was made possible from architects recruited from out of state and as you’ll read below, a few examples in Cleveland were made from professionals brought in from Chicago. The influence of the Arts and Crafts movement can even be seen in the examples built by the expat architects who lived in American cities. The examples below are just a few of the many buildings in Cleveland known to catch the eyes of tourists and locals alike. 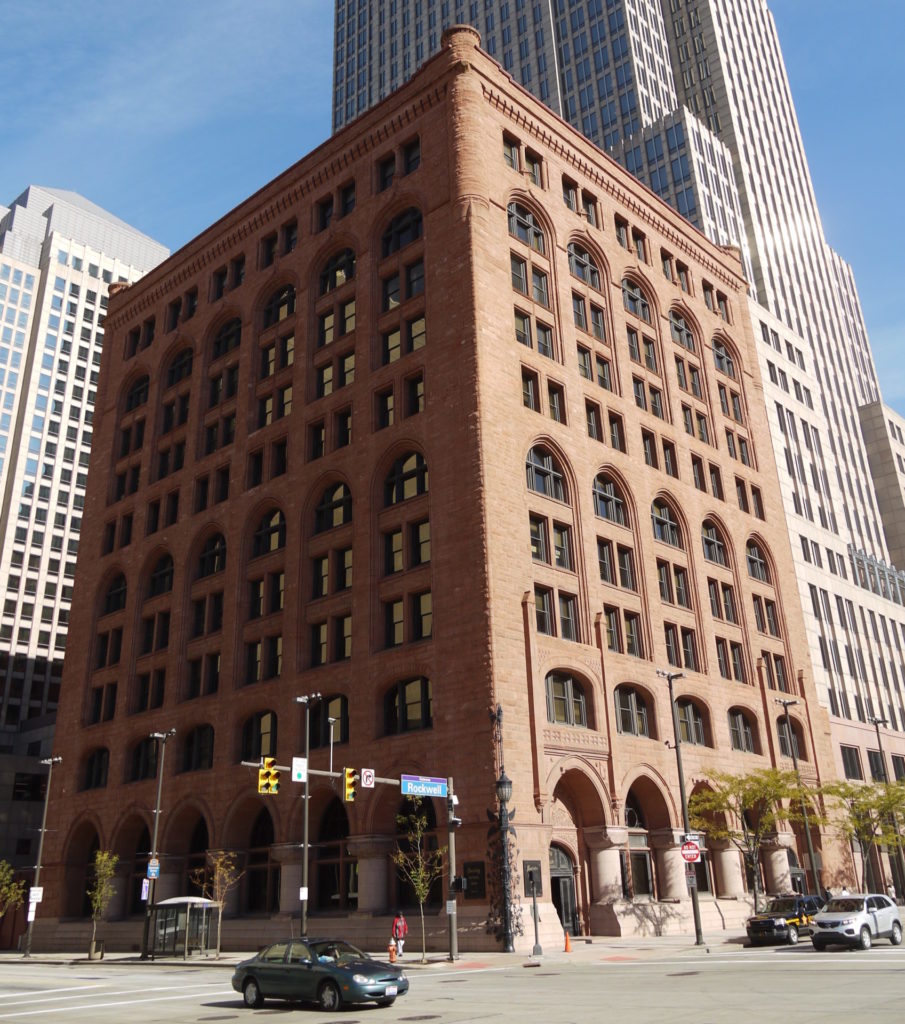 The tallest building in Cleveland until 1896 and locally dubbed “Ohio’s Skyscraper,” this high-rise ten-story building built in 1887 hides an impressive and colorful interior, complete with Walter Crane murals and the interiors and leaded glass ceiling designed by William Pretyman. The building was created to house the largest bank in Cleveland on the north corner of the city’s Public Square and the top floors would be rented out as office space; John Welborn Root of the Chicago architecture firm Burnham & Root was recruited to build the red sandstone building. The exterior of the building has elements of the Gothic-style and Medieval look in the many arches seen outside. An ornate street light on the corner of the building rounds out the historically preserved building.

However, the impressive pull to locals and tourists is the colorful interior with english painter Walter Crane’s murals depicting the theme of “The Tale of the Goose That Laid the Golden Eggs.” Crane himself had collaborated with William Morris and was a follower of John Ruskin; The beautiful walls and the leaded glass ceiling are the creations of William Pretyman, english-born and Chicago designer with a strong dedication to the British Arts and Crafts Movement. Pretyman would be forever known as Root’s “Color man,” collaborating with John Root on many projects.

Currently, the building is attached to the Key Tower and houses the local Key Bank branch; thankfully the richness of the interior has been preserved. 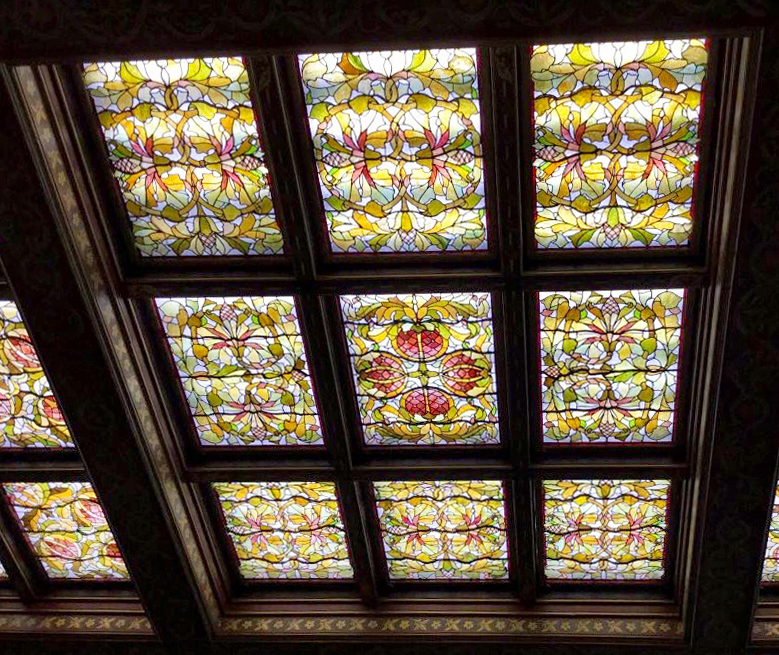 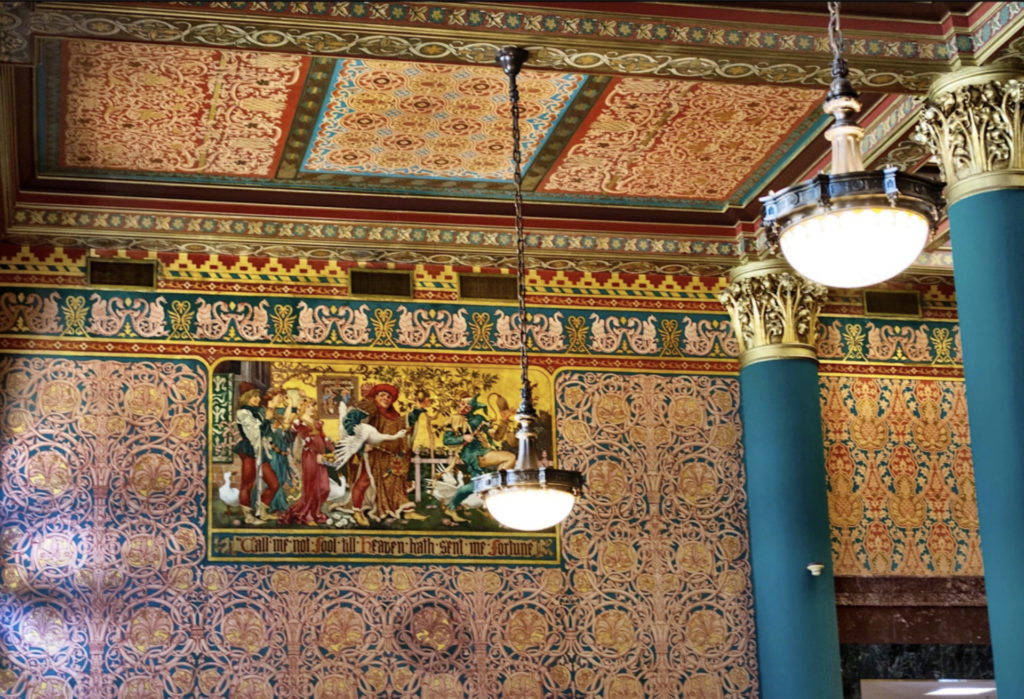 The Banking Hall, designed by William Prettyman, is located in the Cleveland Society For Savings Bank. Courtesy of thearchitectureprofessor.com.

Oberlin, Ohio is home to a number of architectural landmarks, including the Frank Lloyd Wright-designed Weltzheimer/Johnson House, Oberlin College, and The First Church in Oberlin, United Church of Christ. The latter, while categorized as Greek Revival, was characterized by simplicity and proportion; the brick building, upon completion in 1844, was declared the largest building west of the Allegheny mountains at the time. (2) The church was listed on the National Register of Historic Places in 1975. 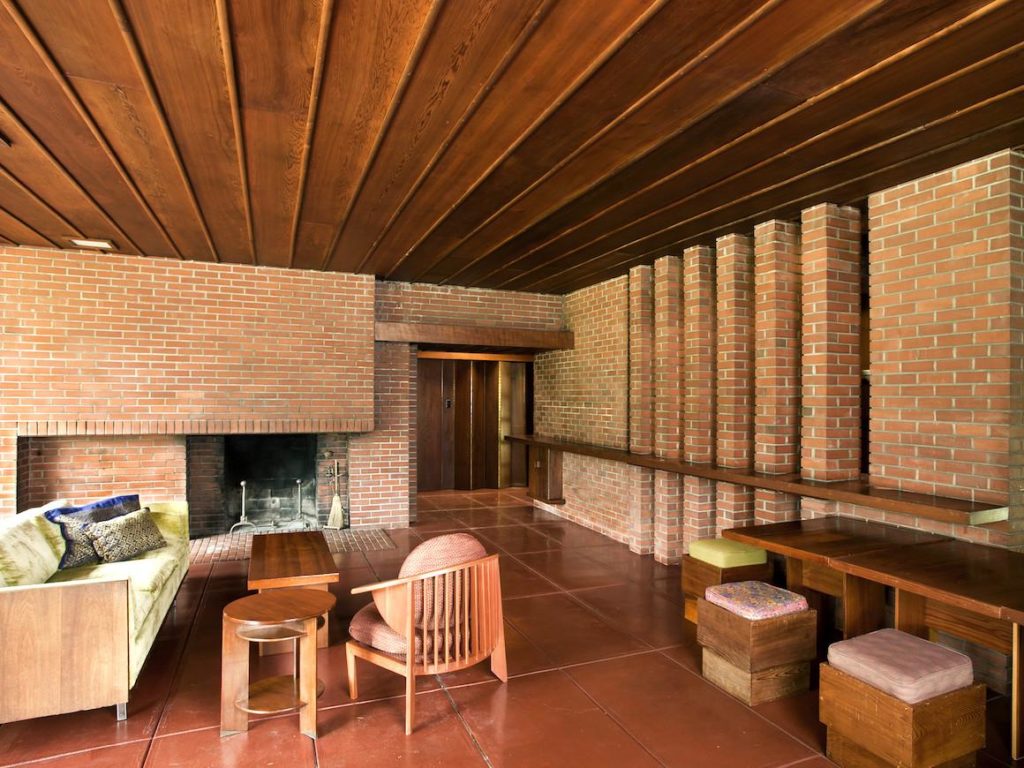 The Weltzheimer/Johnson House, located near Oberlin College’s campus, demonstrates an architectural answer to the demand for beautiful and affordable middle-class homes in post-World War II America. The concepts of organic architecture had evolved into Usonian characteristics by the time of the house’s construction: a flowing floor plan with distinct public and private wings; a slab floor of concrete with grid patterning and radiant heat; a flat roof and cantilevered carport; a centralized masonry fireplace; board-and-batten ceilings with “sandwich” walls; built-in furniture; and tall glass windows and doors opening to the landscape. (3) 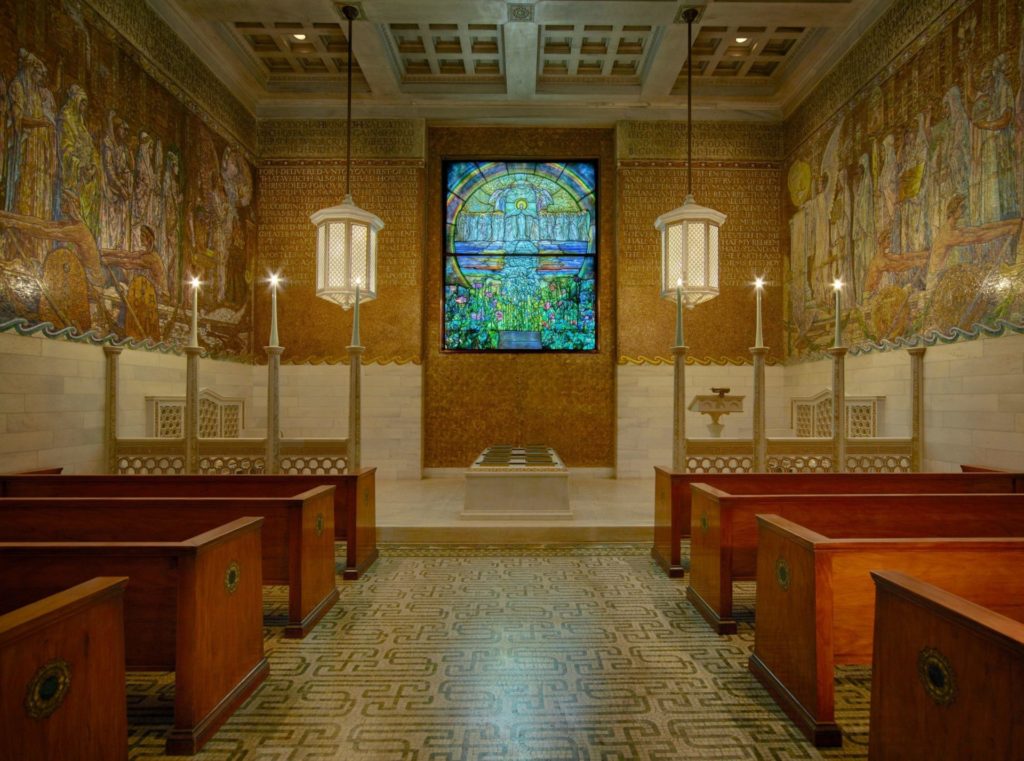 The Wade Memorial Chapel begins with bronze entry doors weighing four tons that continues into an interior designed by Louis Comfort Tiffany himself – one of the few remaining. The interior is made with Favrile art glass – one of his signature mediums – throughout the interior and the focal point is Tiffany’s stained glass window The Flight of Souls, showing the consummation of the Divine Promise. In addition to being the focal point of the interior, this historically important window was on view at the 1900 Exposition Unvierselle in Paris where it won a gold medal.

For those interested in seeing all the above examples of architecture in-person in Cleveland, Ohio, Initiatives in Art and Culture has good news.

In its 24th annual Arts and Crafts Conference, Initiatives in Art and Culture explores Cleveland and environs, both as a hub for the Arts & Crafts Movement and as a site of its living spirit. The conference considers Cleveland’s connections to other centers of the Movement, Chicago in particular, its important metal-working and ceramic traditions, and the cultural institutions, context, architecture, and planning of the city. The Conference will start Thursday, September 15th and lasts through September 18th.

USE Ticket Option: Last Chance $700 in lieu $750; one day and student rates available

“Owners, clients, and residents come and go, but architecture lives on, acting a role in the life of the city and its citizens long after the original players are gone.” – author Alexandra Lange 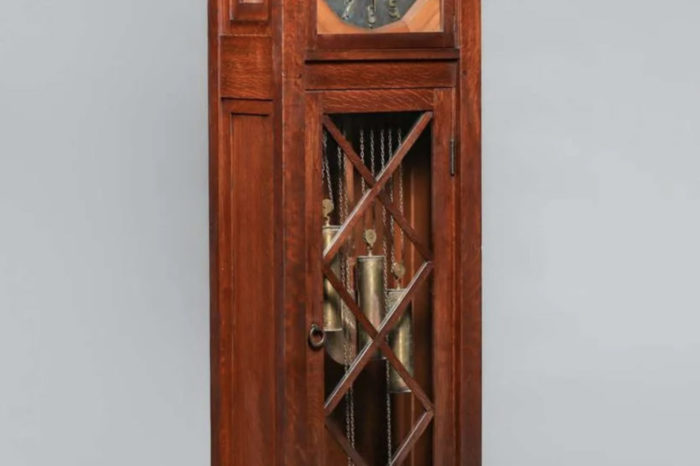