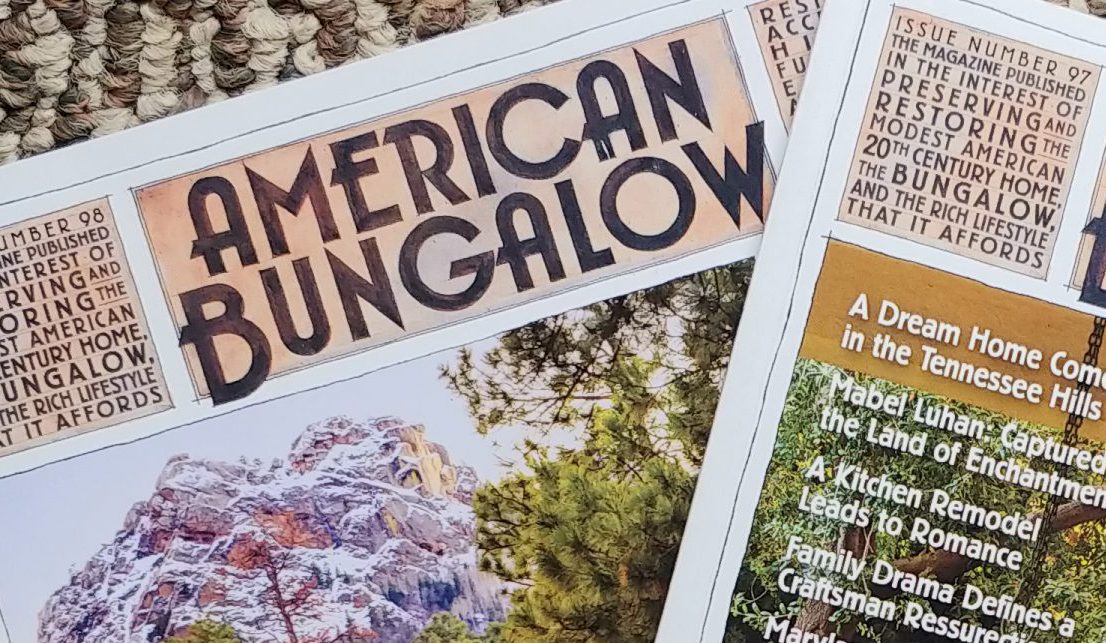 When I spoke with magazine publisher John Brinkmann, he was feeling excited. His upcoming issue — number 100 — of American Bungalow is around the corner and he has a story for that issue that just blew him away. In his words, “…a perfectly American story of people who became fabulously successful but never forgot their bungalow.” I, of course, had to ask him for more. Just a tease. He generously gave more.

To summarize, the story is about a family of farmers who built cultural centers on their old farmland, giving this huge social contribution to their town. Here’s the kicker: they ultimately saved their family farmhouse on their land and the legacy of family memorabilia inside. The farmhouse is still used for meetings and they additionally preserved 30 acres of farmland. “These people have not forgotten their roots and yet they gave everything that society gave them back again in terms of cultural contributions,” says Brinkmann. “It’s such a good story of a family who hasn’t forgotten who they are.”

Brinkmann makes his office in an actual bungalow in Sierra Madre, CA — and with a small staff, publishes American Bungalow, a magazine which according its website is “dedicated to the interest of preserving and restoring the modest American 20th century home, the Bungalow, and the rich lifestyle that it affords.” Brinkmann lives the lifestyle himself with a house and cabin with a cozy and authentic style, two words that in Brinkmann’s opinion describes the movement itself and why people love it so much. Brinkmann took some time to speak with us on memorable stories, what inspires him, and trying to connect with another generation.

ArtsandCraftsCollector.com: What’s been the biggest change that you’ve seen in bungalow design since you started issue #1?

John Brinkmann: What we have seen is sort of a re-interpretation of the bungalow on more modern terms and we do see a lot of Arts and Crafts style homes that are built to a larger scale, but with the same sort of personable amenities. The other side of that question would be people moving into an older house and they do quite often want to make changes and those are most often to the kitchen and the bath. That’s a very natural thing, those are very personal spaces. For the most part, most of our readers will redo those rooms in ways that are compatible with the original design, particularly the bathroom. There have been changes in lifestyle and preferences over the years, but the essence of the bungalow has remained the same. It’s a very efficient, small, and personal space that is adequate without being excessive.

It’s been a good accomplishment and honestly very rewarding to have come up with an idea on a magazine about Bungalows at a time when there wasn’t much interest…and now that’s changed. I’d like to feel like we had something to do with that change. – John Brinkmann, American Bungalow 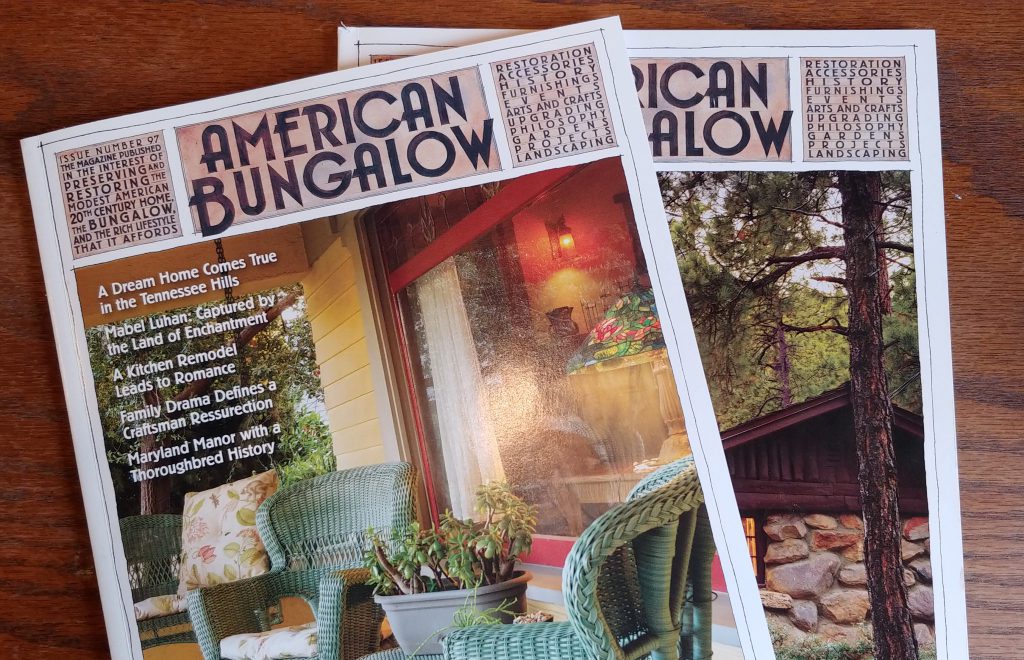 JB: It’s kind of like finishing a race, only we’re not finished. (laughs) But it definitely has been a milestone – a point that I don’t know if we ever doubted that we’d make it but it’s definitely looming big for us. We’re going to do a special issue and we’re making fundamental changes in the magazine in what we cover because I think the readership has changed, the interest levels have changed. But for me personally, it’s a legacy: this is what I did with my life. It’s already a family operation, everyone who works here is close in one way or another. It’s not at all a corporate type of environment. We’re sitting in a bungalow in Sierra Madre and there’s four of us. It’s been a good accomplishment and honestly very rewarding to have come up with an idea on a magazine about Bungalows at a time when there wasn’t much interest — and now that’s changed. I’d like to feel like we had something to do with that change.

A&CC: Describe one story your publication has done that’s been particularly memorable for you since you started.

JB: I couldn’t do it for one story, but there are a series of stories. I do remember the personal nature of so many of the stories. We have readers sending us unsolicited stories of their life in their home – it’s very touching. You don’t expect to get that kind of thing, but it happens and I do enjoy the very personal inside view of other people’s lives in a situation where all of our viewers can understand. Then we have regular contributors like Tim Counts in Minneapolis, who has been with us almost from the very beginning and we just get one Minneapolis story after the other that’s just delicious because it’s Arts and Crafts and it’s small. It’s a piece of America that I dearly love. Or Bob Winter’s contributions that are another different level.

A&CC: I recently read an article in The New York Times about folks who need to sell their Bungalow homes are facing pressure to whitewash their walls to appeal to a mass amount of potential buyers. It’s an article that’s been shared among online collectors because of its controversial nature, but as someone who lives the bungalow lifestyle, what do you think?

JB: We watched a lot of people drop their bungalows and run off to modern. These are the same people that had Grueby pottery on their mantle earlier; that bothers me a little bit because it shows a certain insincerity about their interest. But for the most part, our readers have stayed 100 percent and I’m happy about that. We’re also seeing a new generation of people growing up and while they don’t have the same feeling about certain aspects of bungalow life, the authenticity that appeals to a younger generation: both sides really love that. What they don’t like is the darkness. They want everything painted white. In terms of staging within real estate and making a space appeal to a mass group of people, you’re destroying something that can never really be brought back quite the same again and that I find to be really problematic. I think there will be a new generation that will come around looking for the warmth of home. Anybody can paint a space white, but personally, I want a space that reflects me.

A&CC: What are you most proud of?

JB: Probably the thing I’m most proud of is that we have been able to inform people who lived in houses that were painted back in the fifties and show them that this is what they can look like if you just remember what they were originally like and find out about it. By showing rendered photographs of gorgeously restored homes, we’ve created a huge interest in that original style that to a degree had disappeared.

…it’s not about how big you live, it’s about how genuine you live. That’s what the magazine stands for. – John Brinkmann, American Bungalow

A&CC: What would you like to see happen in the next 50 issues?

JB: I wouldn’t change things too much. I would hope that we could stay abreast of changes, societal changes, trend changes, but that we never lose sight of authenticity and genuineness. We’re not trying to sell anybody anything – we’re trying to improve their lives. The way that we improve lives is to point out to them what’s under their nose. A lot of people like bungalows because they are small, but they don’t know about the Arts and Crafts movement. That’s what really inspired the magazine: when I purchased the bungalow as an office and I realized wow this is related to all that beautiful artwork I used to see when I worked in Europe. It’s all the same and to think that this humble little house was on every street corner in the neighborhood that I grew up in had this wonderful Arts and Crafts legacy is just something that had to be shared. That’s really what we did and that’s maybe where we will continue to go and remind people that it’s not about how big you live, it’s about how genuine you live. That’s what the magazine stands for. 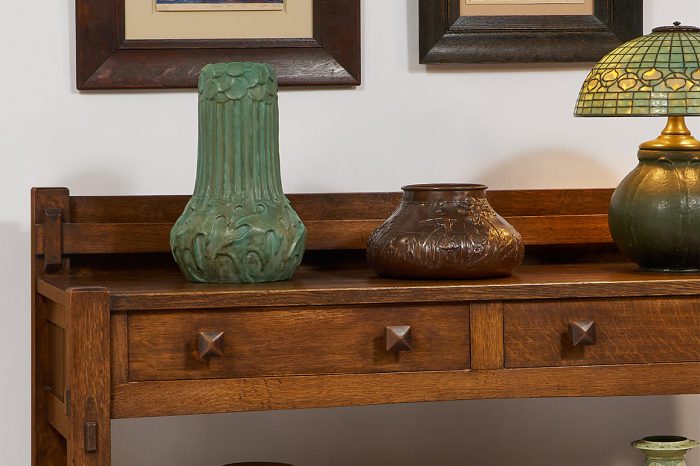