Auction Frenzy — Or Not?

Auction Frenzy — Or Not?

Brunk Auctions here in Asheville has steadily grown from a small, local auction business started nearly 35 years ago by Robert Brunk to a nationally-recognized auction house with international bidders and a stellar reputation with both consignors and buyers.

Next generation owners Lauren and Andrew Brunk (pictured) are keenly aware of the interest in the Arts and Crafts movement, so it is not unusual to find a few noteworthy pieces in each of their auctions. This past Saturday was no exception as they offered a substantial L. & J.G. Stickley open bookstand, a pair of Karl Kipp “Princess” candlesticks, several pieces of rustic furniture, and a wide assortment of art pottery.

Leigh Ann and I dropped in during the Friday afternoon session to put out some Arts and Crafts Conference brochures, as well as to check out the Karl Kipp candlesticks and the L. & J.G. Stickley bookstand. We certainly did not need either, but could not resist the temptation to have a close look at them.

During one of his breaks, Andrew Brunk stepped over to where we were standing and commented on the small size of the crowd. In a room that looked like it could seat nearly 200 people, there may have only been 20 people there. Yet the bidding was brisk and prices were meeting or exceeding the catalog estimates.

“They’re internet bidders,” Andrew explained, “and plenty of them, but I can’t see them, I can’t talk to them, and I can’t cajole them into bidding.”

As I recalled the days when the same room was standing room only, I thought about what Andrew had said. Back then, if you wanted to bid, you showed up in person — and scanned the crowd to see who your competition might be that day. 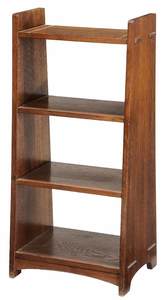 Before leaving last Friday, I dropped off an absentee bid of $500 on the L. & J.G. Stickley bookstand, and decided to pass on the Karl Kipp candlesticks, which were identical to a pair of Roycroft candlesticks we have on our dining room table. We had other commitments on Saturday, so later that afternoon I called over to see how the bookstand had done. Turns out the hammer price was $650, making it $813 with the buyer’s premium.

Like the candlesticks, we didn’t really have a place for the bookstand, but I loved the form, so I must admit I was a little disappointed. And then I began to wonder: had I been at the auction, bidding in person, raising my card with each counter-offer, silently daring the competition to outbid me, would I have stopped at $500? Or would I have bumped it another bid? Or two? Or when Andrew looked at me from the podium as if to say, “Are you going to let this one get away?” would I have again raised my card?

But it didn’t happen. I left a bid of $500 and when someone took it even higher, I was out.

And so, as I sat here in our house, it made me wonder, as no doubt it does Andrew Brunk and every auctioneer in the country, exactly what the final impact internet bidding will have on auction prices.

Will they remain strong as a result of there being more on-line bidders than those sitting in-house?

Or will the decline of in-person, emotional and competitive face-to-face bidding have an even greater influence on prices?

I guess only time will tell. 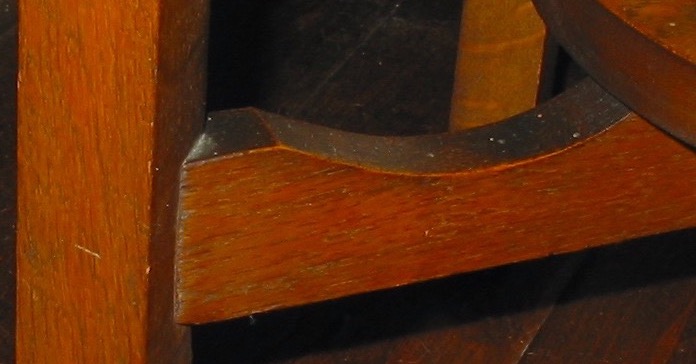