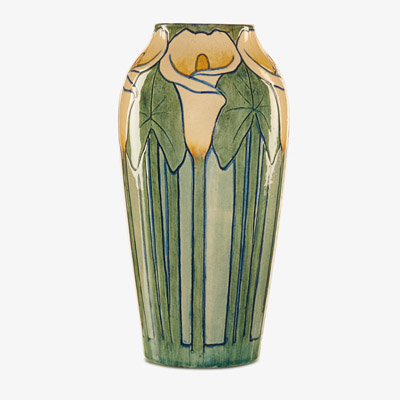 This article has been revised to indicate the correct measurements of lots 100 and 166.

First pick: a gorgeous Calla Lily vase, which according to Rago’s condition report is “…perhaps the prettiest piece of Newcomb College we have seen.” The vase – created circa 1904 – comes from a private collection from New York state and is signed, dated and numbered. Estimates for the beautiful Calla Lily vase range from $15,000 – $20,000.

Lot number 116, a George Ohr stamped vase, which was made during what some experts would say his best period, is offered with an estimate range of $10,000 – $15,000 and estimated to have been created in between the years of 1897 to 1900. In an interview with blog The Hot Bid, David Rago says “This is arguably his best period. He was still glazing pots at this time. He later switched to bisque fire only – but was also at his creative peak in manipulation and overall concept of what his pieces could be. That is definitely his power alley period.” During George Ohr’s career, the majority of his work was unsellable and quite thin, most of his work has minor damage. This vase is listed in “Excellent Condition” on Rago’s Condition Report. What made this vase “Exceptional” is the fact that this vase is much larger than most of his hand-sized pots and features two complicated handles. “These tall, handled pots are a subset of his work that have remained among the more highly regarded this last half-century,” Rago told The Hot Bid.

Lastly, another lot that caught our eye is Lot number 166, a tall bud vase by Adelaide Robineau – created in Syracuse, NY, circa 1921. Also listed in “Excellent Condition,” the estimates for this glazed porcelain vase run from $8,000 to $12,000. The vase also features a medallion signature, date, and number. Many of Robineau’s works are vases and other containers, including her most well-known work — the Scarab Vase. 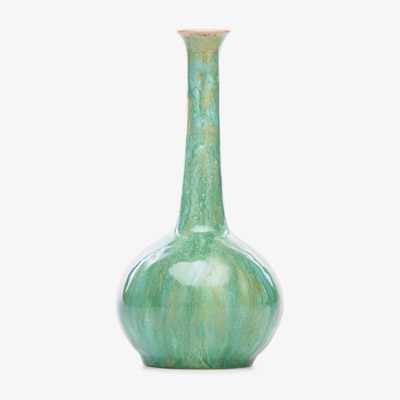 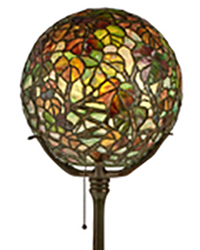