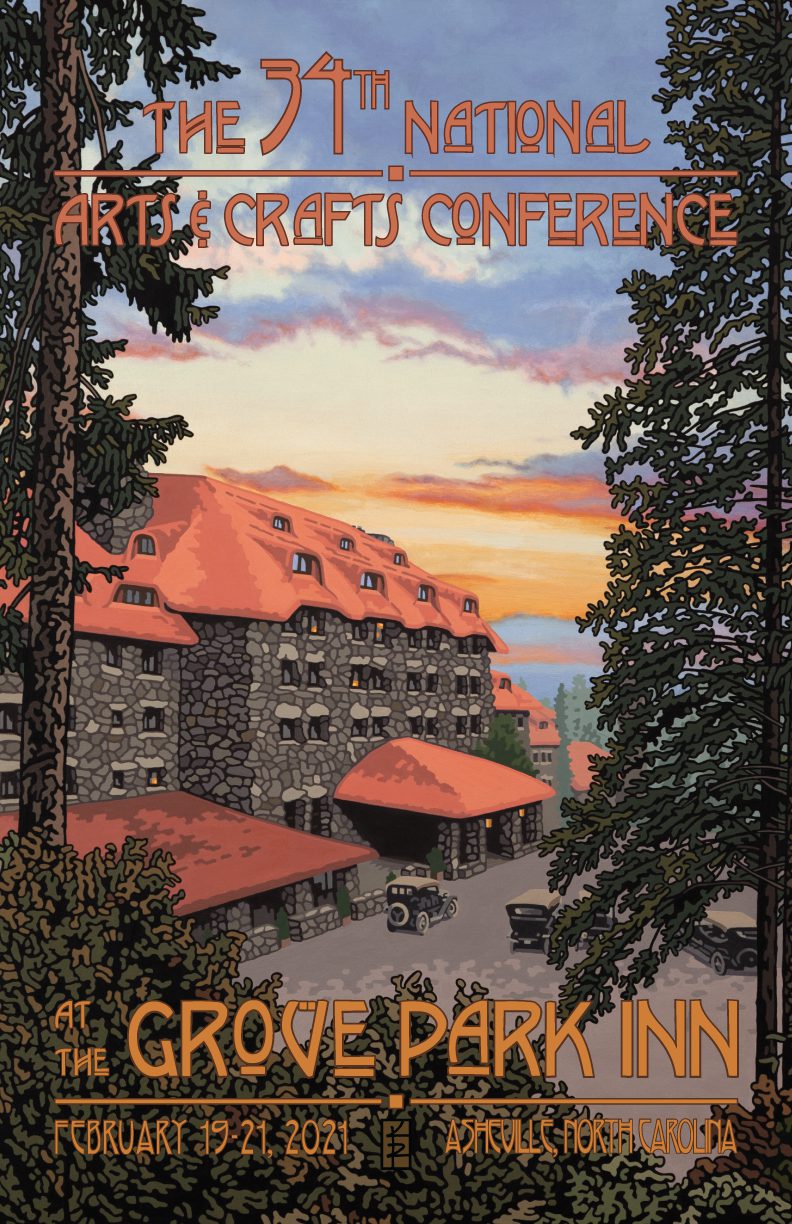 The annual poster for the National Arts & Crafts Conference at the Omni Grove Park Inn has become a collectible for fans of the annual event in February as well as collectors of the Arts and Crafts era from all over the country. Conference attendees annually receive a poster at check-in, advertising the following year’s conference but almost always featuring an interpretation of the iconic and historic original main inn of the Grove Park Inn, easily identified by the rocky exterior and the rust red roof. 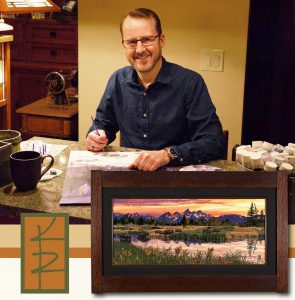 Keith Rust of Keith Rust Illustration, the artist for the 2021 National Arts and Crafts Conference Poster

This year, Keith Rust of Keith Rust Illustration was chosen to be the latest poster artist to develop our annual poster and this year’s poster art has been revealed: an interpretation of a historical 1913 photo of the Grove Park Inn capturing the architectural style of the main inn and showing the automobiles from that era, the shot framed with a tree on each side. The piece is called “Timeless Grove Park”; while making it, Rust was aiming to recreate the work of vintage art posters.

“The inspiration for this painting was initially sparked while walking around studying the beautiful architecture of the Grove Park Inn resort with the hope of finding that perfect view,” said Rust. “My desire was to find a shot that captured a similar angle from the historical 1913 photos, incorporating the cars from that era with the present day modifications to the building and mature landscaping. I was hoping to create a timeless piece reminiscent of vintage travel posters.” 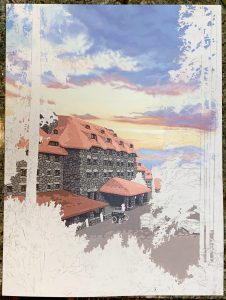 Poster progress: Here, Keith Rust has completed the sky and the exterior of the Grove Park Inn. You can see the drawings of the surrounding trees, waiting to be painted. Photo taken by Keith Rust.

The process for making the poster art started with a composition of multiple photos of the iconic shot of the hotel and transferring the visual into his art board – and according to Rust, the process takes a long time to complete. “I began to combine the photos that I took to create the ideal composition and atmosphere I was looking for. Satisfied with my final design, I then drew the layout onto my illustration board and began painting with traditional brush work to capture the sky before gradually moving forward in the painting.” The picturesque skies that North Carolina is known for is detailed in the photo with a beautiful gradient of colors from blue to white and from a rose pink to a golden yellow. We asked how long does the artwork take. “I typically spend between 500 and 600 hours to complete each painting” replied Rust.

While the process of creating artwork by hand takes a long time, the methods used create a unique style that Rust can proudly claim. “I love the fact that my paintings are created by hand in a traditional manner with only a couple brushes and acrylic paint,” says Rust. “It is always interesting hearing people as they try to figure out my technique due to my graphic style. My work conveys the sense of a traditional block print but with more vibrancy, detail and depth.” The block printing style has long been a staple of the Arts and Crafts movement and a popular methodology to the artists tasked with creating the annual poster, however the additional presence of hand-drawn and painted methods to create the background gives the artwork some added depth.

Rust is a Roycroft Renaissance Artisan from California and was raised on his family’s ranch in Northern California and discovered his love of painting from his first art instructor. With his instructor’s recommendation, Rust went to the Art Center College of Design to study illustration. After graduating with honors, he worked in the computer game industry as a game artist before accepting the role of Art Director and continued his work in the computer game industry. He then went into education and became a high school art instructor and renewing his love of painting. Rust was an exhibitor with the National Arts and Crafts Conference earlier in 2019 and returns as an exhibitor again in 2020 for the Contemporary Craftsfirms Show in the Grove Park Inn’s Vanderbilt wing. When asked what his favorite thing about the conference was, it was an easy answer. “I love being involved in in the conference, because it provides me with an opportunity to reconnect with incredibly talented colleagues who are such a warm and genuine group,” gushed Rust. “I am always excited for the opportunity to meet so many enthusiastic attendees as they visit our booths. The whole event is like a big family reunion.”

The final poster art for the National Arts and Crafts Conference poster is revealed, the artwork was done by artist Keith Rust. The annual poster, which each year shows different interpretations of the Grove Park Inn’s historic main inn, advertises the following year’s conference – but will be given to attendees and sold to the general public at the conference in 2020.

You can visit Keith Rust in his booth in the 2020 Contemporary Craftsfirms Shows running February 21st through the 23rd in the Vanderbilt wing at the Grove Park Inn. His poster will be given to conference attendees, but will also be available for the general public to purchase.

For more information on Keith Rust and Keith Rust Illustration, visit his website at http://www.keithrustillustration.com.