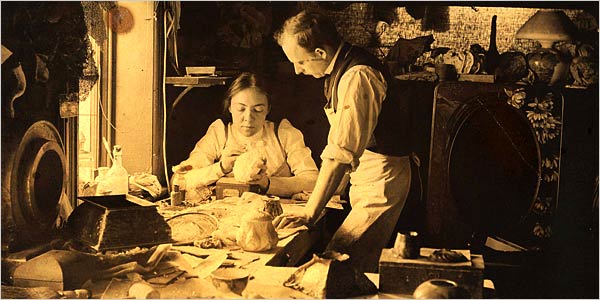 Have you ever wondered who designed those gorgeous vibrant Tiffany flower lamps made by Tiffany Studios in the early 1900s? Not only can the New York Historical Society tell you, they can show you.

In 2006, Dr. Martin Eidelberg, a professor emeritus of Art History at Rutgers University, uncovered a collection of letters, confirming the designer responsible for many of Louis Comfort Tiffany’s iconic lampshades and various offerings made of glass, bronze and mosaics. Clara Driscoll, head of the Women’s Glass Cutting Department, managed a large department of young women at Tiffany Studios in the early 20th century. During this time, Driscoll and these women were responsible for selecting and cutting glass for their iconic pieces. The cache of letters handwritten by Driscoll herself revealed that Clara Driscoll herself generated most of the nature-inspired designs for the iconic Tiffany lampshades, including the Wisteria, Dragonfly and Peony models. Clara Driscoll and her department are the focus of a 2007 book “A New Light on Tiffany: Clara Driscoll and the Tiffany Girls” and an exhibit — A New Light on Tiffany — as an addition to the permanent larger centerpiece exhibit The Gallery of Tiffany Lamps, currently an ongoing feature on the 4th floor of the New York Historical Society. The book was written by Eidelberg, Nina Gray, and Margaret K. Hofer and additionally, the three authors offered curated commentary during the exhibit.

Tiffany Glass designer Clara Driscoll circa 1901 in the Tiffany Studios in a workroom with Joseph Briggs, another Tiffany employee. Courtesy of the Metropolitan Museum of Art/Wikimedia Commons.

The Ohio-born Driscoll travelled to New York City in the late 1800s to go to school and start a career. A graduate of Cleveland’s Western Reserve School of Design, Driscoll enrolled in the Metropolitan Museum Art School upon arriving in New York City and was hired by Louis Comfort Tiffany in 1888. Four years later, she became the head of the new Women’s Glass Cutting Department – and during her time at Tiffany designed most of the Tiffany lampshades and mosaic bases, which were often known for their innovative vibrant color and texture.

The exhibit includes sixty Tiffany lamps, windows, mosaics, enamels and ceramics designed by Driscoll and other women at Tiffany Studios, as well as many other objects made under her supervision. Also included in the exhibits are archival material, which provide a documentation of what the women of Tiffany Studios did in their day-to-day as well as Driscoll’s experience as a New York working woman in the early 20th century. 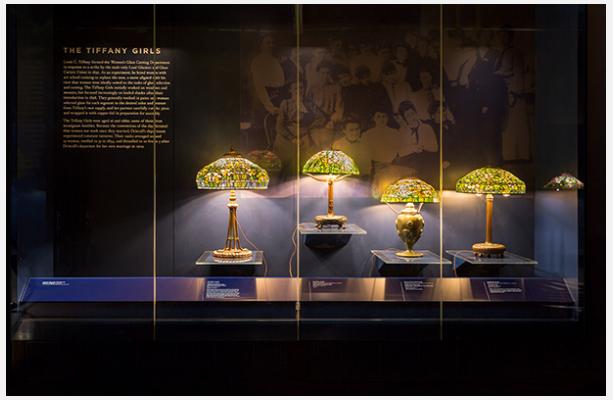 “The Tiffany Girls” is currently on display as a part of the larger exhibit “The Gallery of Tiffany Lamps” – the centerpiece display on the 4th floor of the New York Historical Society building.

The book, based on letters written by Driscoll, features her artistic achievements and manager of the “Tiffany Girls” – the department of women responsible for creating many of Tiffany’s lamps, windows, mosaics, and other items that defined luxury in the 1900s. 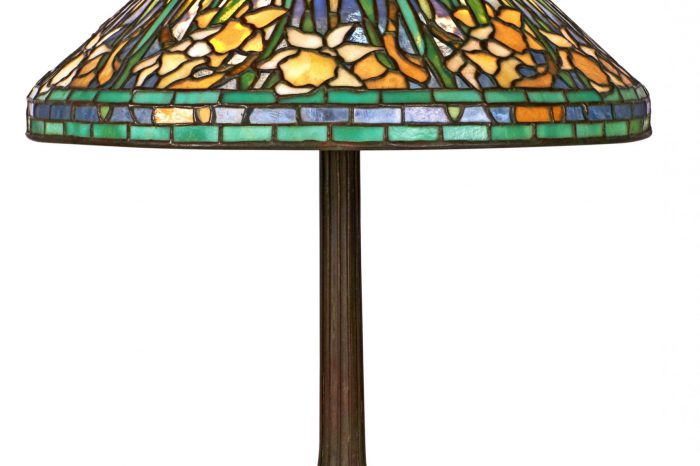