Metal and Enamel: A Magic Combination – The Works of the Elusive Gertrude Twichell 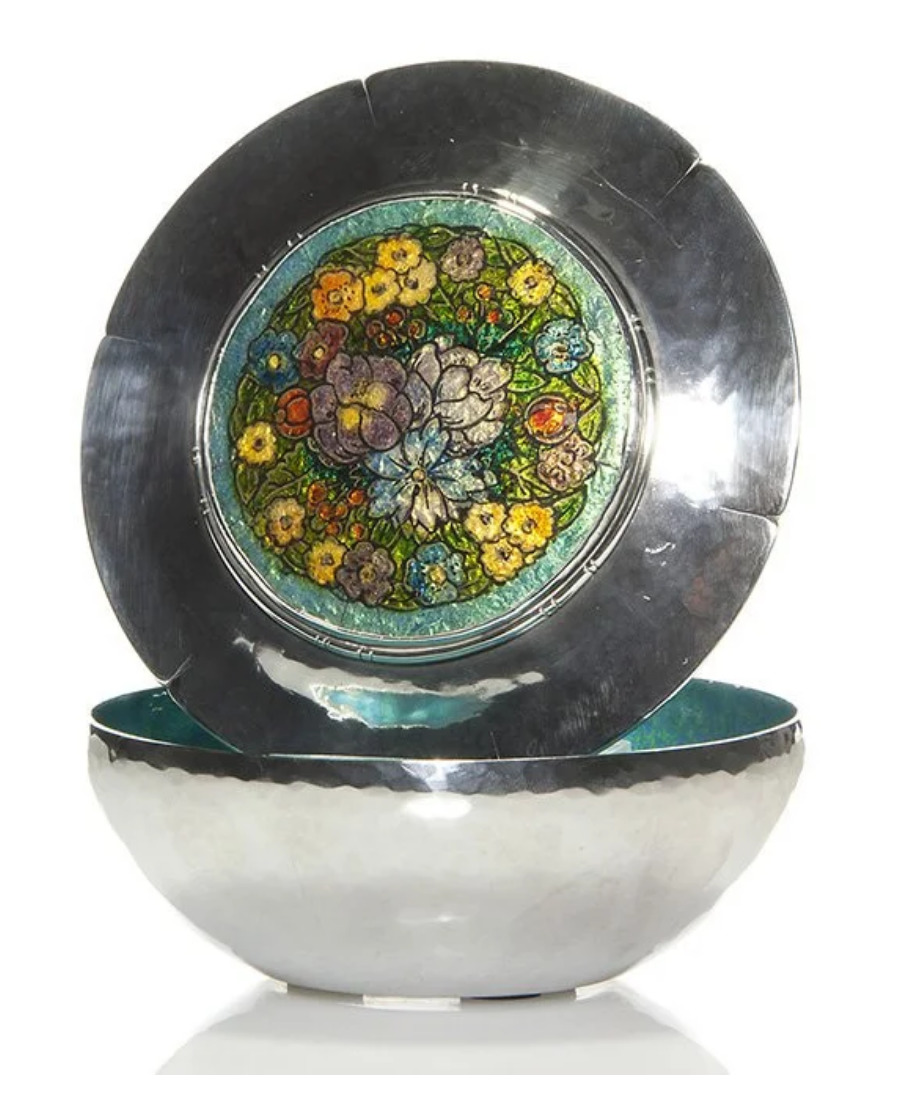 Metal and Enamel: A Magic Combination – The Works of the Elusive Gertrude Twichell

This weekend, the latest Zoom course offered from the Stickley Museum will explore the contributions made from “Tough as Nails” female metalworkers of the Arts and Crafts Movement such as Jessie Preston and Elizabeth Copeland, the latter being one of New England’s most prominent enamelists of the Arts and Crafts period, an exceptional designer and skilled crafter, and a member of Boston’s Arts and Crafts Society. A few months ago, the works of another female designer and craftsperson hailing from Boston recently got some attention in the world of online auctions as this past June 14th, at a Decorative Arts Auction from Treadway Gallery, a remarkable thing happened.

An exciting bidding war started, a thrill that would make online auction spectators pay attention. An auction lot originating from the Robin Greenwald collection, described as a hand-hammered copper box with a decorated enamel top, had the spotlight after attracting 34 bids. The small box ended up selling for a realized price $21,250.00, effortlessly sailing past the high estimate of just $500.00. The copper box in question was made by Gertrude S. Twichell, a skilled designer and crafter in her own right, whose works have landed alongside her famous contemporaries and highlighted in museum collections as examples of gorgeous Arts and Crafts Metalwork. 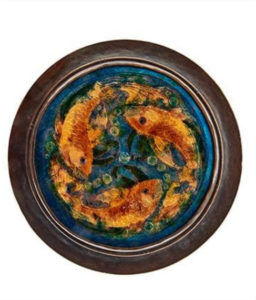 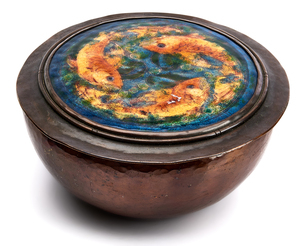 A signed hand-hammered copper and enamel box, only 2.25″ high x 5″ in diameter listed in very good original condition sold for a realized price of $21,250.00. Images from liveauctioneers.com and Treadway Gallery.

The appeal of Twichell’s works could be seen long before auction sales proved the value of her works. In a 2005 New York Times article, writer David Colman interviews a woman whose passion in the decorative arts led her to discover a little hand-hammered and hand-enameled bowl with little flowers and blue enamel at a Connecticut antique fair. For the cost of $500, Twichell’s box inspired the woman to find out and collect the works of other silversmiths. A simple search on liveauctioneers.com for works by Gertrude Twichell shows a work similar to that description, an important and rare signed and stamped sterling and enamel box with “Beautiful patina, fine craftsmanship” and listed in excellent original condition. 18 bids later, the work ended up selling at a Humler & Nolan auction for $5,250.00. 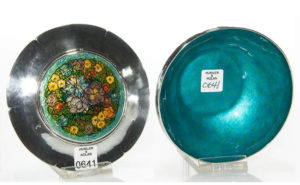 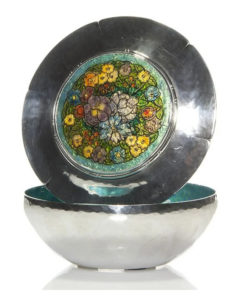 An important and rare sterling and enamel Arts and Crafts circular box by Gertrude Twichell with a fine hand hammered surface. The cover in flower blossom form is centered with a colorful floral bouquet in enamel and foil. The box interior is coated with nice turquoise enameling. Image from liveauctioneers.com and originated from Humler & Nolan. 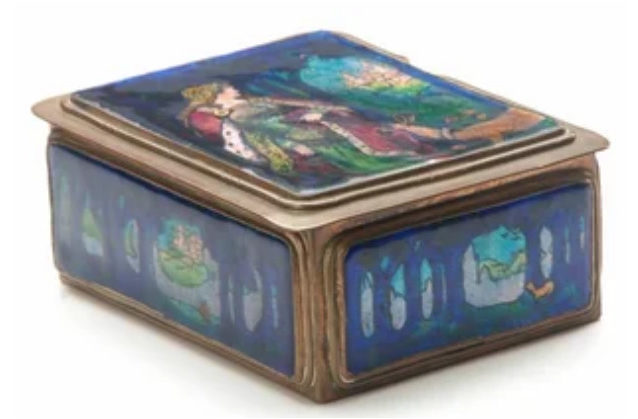 A signed hammered copper and enamel hinged box decorated in the Pre-Raphaelite style with panels featuring a maiden and deer in a wooded landscape. This was a rare example of her work featuring all enameled panels. This work sold for $9,000.00, past the high estimate of $3,500.00 in an auction from Rago Arts and Auction Center. Image from liveauctioneers.com and originated from Rago Arts and Auction Center.

An exact example of the sterling and enamel work resides in The Two Red Roses Collection and presumably would be on display at the upcoming Museum of the American Arts and Crafts Movement. Years ago, the work also caught the eye of author and jewelry authority Rosalie Berberian as an example of the naturistic design so prevalent through the reform movement. In a contribution to the March 2016 e-newsletter from The Two Red Roses Foundation describing the works of Twichell, Berberian described the same design of the blue and silver floral bouquet box as “a stylized arrangement of leaves with realistic blossoms in its center, set against a vibrant, deep blue background.” Berberian included another example of Twichell’s work in her description, “Here, Twichell created works glorifying nature through depictions of colorful flowers and foliage…The floral elements of the main design are rendered in a naturalistic fashion, including veining in the leaves and light lines against a dark background that serve to define and separate petals, leaves, and individual berries. The cover edges of both boxes are notched, creating rims that suggest the tips of flower petals, in keeping with the overall aesthetic of the designs.” 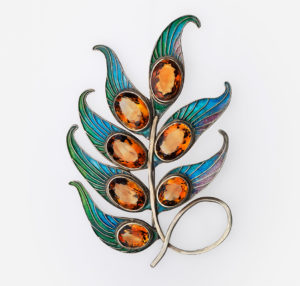 A silver and enamel Peacock Brooch with citrine embellishments made by Gertrude S. Twichell was featured in the Boston Museum of Fine Arts exhibit “Boston Made: Arts and Crafts Jewelry and Metalwork.” Image: Museum of Fine Arts, Boston.

In a recent exhibit from the Museum of Fine Arts in Boston entitled “Boston Made: Arts and Crafts Jewelry and Metalwork,” a gorgeous example of Twichell’s mastery was shown in a showcase of nine women artists, including Twichell alongside her fellow Boston metalworker Elizabeth Copeland in addition to Josephine Hartwell Shaw and Margaret Rogers. An Enamel and Citrine Peacock Brooch made several favorites lists of exhibit attendees and it is no wonder that this bright and colorful example of metalwork comes straight from The Paul & Terry Somerson Collection of Twentieth and Twenty-First Century Metalwork and Jewelry.

While not much is known about her life, it is known that Gertrude S. Twichell was a graduate of the Rhode Island School of Design, was a master craftsman in The Society of Arts & Crafts, Boston, and exhibited with several craft guilds in America. In addition to creating works that would even find their way to the Paris International Exposition in 1937, Twichell was a writer and contributed articles to the Industrial Arts and Handicrafter publications. 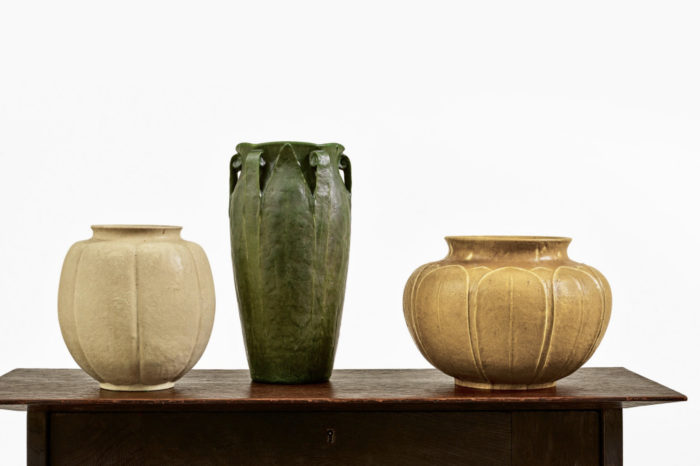 A Shock at Sotheby's: A Grueby Vase Sets A Record