Overbeck Pottery: the Pains and Triumphs of a Family Business

Overbeck Pottery: the Pains and Triumphs of a Family Business

In the Western Indiana city of Cambridge City, four sisters bucked the conventional turn of the century route to marry young and instead created a pottery firm in the basement of their parents’ house. The vases created from this family home became valued items in art collections across the country in modern day, due to the hard work of this family of sisters.

With father John’s skills as a cabinetmaker and mother Sarah’s skills in quilting, ceramics, woodworking amongst others, the four Overbeck sisters Margaret; Hannah; Elizabeth; and Mary Frances were attracted to a career in crafting due to their parents accomplishments in their respective fields. Older sister Margaret would convince her sisters to start a pottery firm in their family home and upon the return of sister Elizabeth from two years of studying under Charles F. Binns, finally made that dream into a reality as their two story home became a pottery studio, complete with kiln in a nearby building.

Margaret Overbeck impressed the world as she exhibited her artwork at the St. Louis World’s Fair in 1904 and wrote articles and provided china painting designs for Keramic Studio Magazine, Adelaide Robineau’s publication. Margaret had cemented a spot as an art instructor at DePauw University in Greencastle, IN, when in 1907 she suffered a serious head injury in a car accident and unfortunately succumbed to her injuries, just after the promising beginning of Overbeck Pottery in 1911.

This left the sisters reeling with grief as they buried their sister and a new business to get off the ground. Fresh from her schooling, Elizabeth took over the management of the firm while Hannah, an accomplished watercolorist, was in charge of the pottery design and decoration. Mary Frances, another graduate of Columbia University and a student of Arthur W. Dow, assisted Hannah with decoration as well as creating glazes. Elizabeth oversaw the technical production and mixing clay shipped from Tennessee, Delaware, and Pennsylvania and working on the potter’s wheel. Watercolorist Hannah’s works were heavily featured in Keramics Studio – the same publication her beloved sister Margaret contributed to. Mary Frances, the youngest, was the driving influence behind the later small figurines Overbeck Pottery would produce. 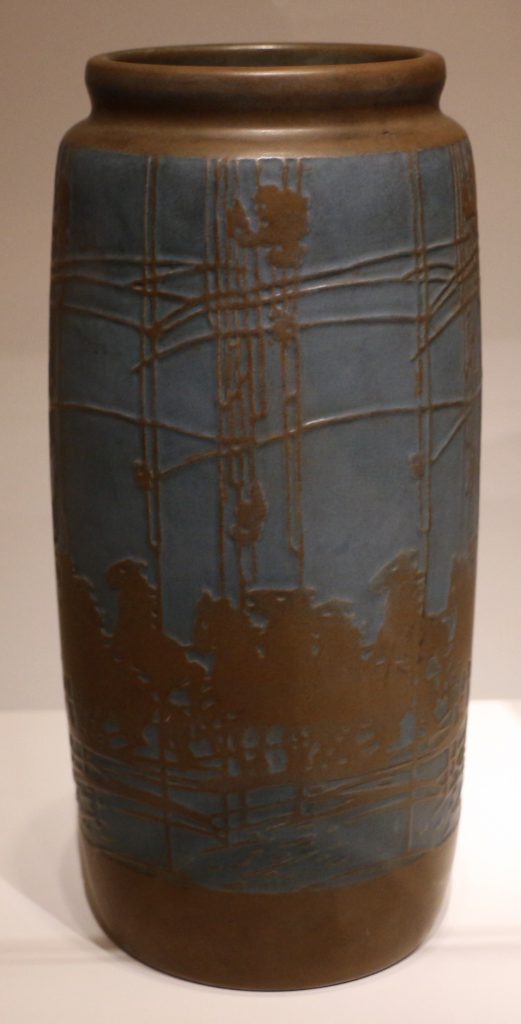 Located in the Indianapolis Museum of Art, this Overbeck pottery vase (ca 1915) is just one of many examples of quality pottery showing the influence of the Arts and Crafts movement. Image courtesy of Sailko, CC BY 3.0 <https://creativecommons.org/licenses/by/3.0>, via Wikimedia Commons

While molds were made – and not used until 1936 – vases, candlesticks, bowls, tiles and tea sets with molded cups and saucers made up much of the items they offered in the early years of the sisters’ firm. During the Arts and Crafts era, the handcrafted vases had a matte surface before evolving into brighter color glazes; these examples during the Arts and Crafts period were popular due to their clean and crisp design, the sisters’ dedication to handcraftsmanship, and the influence of natural elements falling in line with the Arts and Crafts philsophy. In an article titled “Sister Act: Overbeck Pottery,” Don Treadway notes the example of the Overbeck name as a perfect example of an Arts and Crafts pottery firm, but is also quick to add the rarity of fine examples available. “It is really close to as pure an Arts & Crafts pottery as there is because basically it’s all made by hand,” said Don Treadway. “If you wanted to go out and buy or build a large collection of important pieces of Overbeck, it would be very difficult. A large collection would be a dozen pieces.”

However by the start of the 1930s decade, the pottery studio had become a tourist attraction, popular with out of towners who wanted a hand-crafted vase to take home. In 1936, when responsibility for the operation of the pottery firm fell on Mary Frances, while she continued production of her figurines, production of the hand-crafted pots began to slow down. Reliance on the molded forms had increased and when Mary Frances had passed, the family pottery sadly closed.

Aside from an appearance or two in the Antiques Roadshow television show, the Overbeck sisters and their works have posthumously gained recognition for the quality and make of their pots and the convention-bucking legacy of the sisters in the ranks of modern day museum curators, art schools and collectors. Since the beginning of Overbeck Pottery, the works have been displayed in at least twenty different exhibits, the first in 1917 and at least once a decade through the 1970s. Not only have their works been featured at the Indianapolis Museum of Art and Wayne County Museum, the Los Angeles County Museum of Art featured a prize Overbeck vase in their exhibition in 1990. In the late 80’s, Overbeck Pottery was awarded national recognition in the Museum of Fine Arts, Boston sponsored exhibit, “The Art That Is Life”; The Arts and Crafts Movement in America, 1875-1920 and a vase in the collection was chosen as an example of originality in early American pottery and was exhibited in art museums in Boston, Detroit, Los Angeles and New York.

For an example of Overbeck Pottery currently up for auction, please see this listing from California Historical Design’s upcoming AcStickley Auction of a handcarved vase by clicking the link below. Please feel free to click on other examples of Overbeck Pottery from Rago Arts and Auctions, LiveAuctioneers.com, and more!

The AAPA Convention and Show April 27th – May 1st

Past examples of sold Overbeck Pottery lots on LiveAuctioneers.com 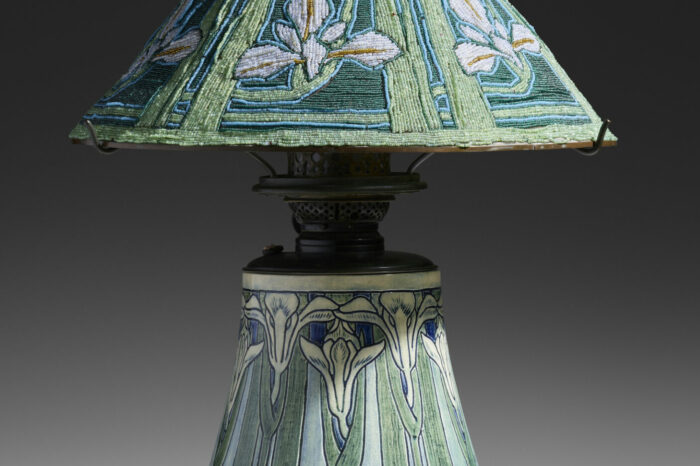