While the Morris chair has emerged as an iconic symbol of the furniture of the Arts and Crafts movement, its history began a few decades earlier and lasts even until today. While William Morris is credited, at least in name, with the reclining chair, he did not, in fact, invent it. One of his associates either designed the first reclining arm chair or discovered one, which he brought to Morris & Company, who began marketing a Victorian version in the late 1800s.

In the early 1900s, nearly every Arts and Crafts furniture company designed and marketed their interpretation of the Morris chair. Nearly all relied on either a wooden or metal bar which rested on the tops of the arms to support the back in various positions, or utilized a pair of short dowels which were inserted into a series of holes drilled in the edges of the arms. 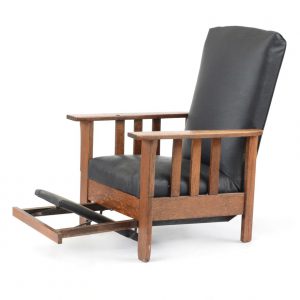 The mechanics of the Morris chair remained basically unchanged until the Royal Chair Company of Sturgis, MI, began marketing reclining chairs operated using a push button. Founded by Jerrold Walton, who was also the chief designer, this prolific firm was active from 1899 until 1928, producing rockers and reclining chairs in a variety of popular styles, including Arts and Crafts.

Jerrold Walton received several patents for the mechanisms built into his chairs, which sometimes included a retractable foot rest, eliminating the need for a footstool. He also experimented with the location of the push-button, which released tension on the adjustable back, allowing the user to set the angle of the back while remaining in the chair. Early models had the push button on a lower side stretcher. Walton later devised a means of moving the button to the top of one of the arms. The vertical rod beneath the button was often hidden inside or beside one of the spindles or slats under the arm.

Unfortunately, Walton invested more time and expense into the mechanics of his chairs than into the design and construction of the chair itself. Morris chairs produced by the Royal Chair Company rarely display the combination of pegged joints, exposed tenons, and quartersawn oak associated with the highest quality Arts and Crafts furniture.

Today the Morris chairs produced by the Royal Chair Company are viewed as more of a novelty item than a serious piece of furniture. In the event, however, that an example made of quartersawn oak with pegged joints, corbels under the arms, and quality upholstery should surface, collectors are apt to agree that it could hold its own in any Arts and Crafts bungalow.

You can read more about the design history of the Morris chair in the February 2020 edition of the 33rd National Arts and Crafts Conference Catalog.