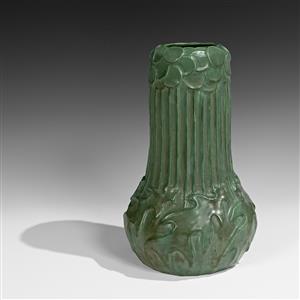 Pottery and Gustav Stickley furniture tended to sell remarkably well during Toomey & Co’s dual auction Art & Design with Tradition & Innovation, the last auction of the year for Toomey & Co Auctioneers. The near 600-lot auction featured works originating from important collections, representing a variety of media from painters, sculptors, ceramicists, furniture makers, and other forms of media. Last year’s first Tradition & Innovation auction proved to be a major success for the gallery, netting $2.2 million for its curated offering of both antique and contemporary works.

In this collection of historically rare and important works, the furniture and pottery offerings were abundant and most sailed past their high estimates. Lot 151 – a Mary Chase Perry Stratton (1867-1961) for Pewabic Pottery vase with dandelion decoration – sold for the realized price of $53,125, nearly twice the high estimate of $30,000. The matte green glazed ceramic vase was described by Toomey & Co as a “large important vase” and “a rare example of the early work being done at the Pewabic Pottery.” Similar examples of this vase can be found in the permanent collection of NYC’s Metropolitan Museum of Art and within the 2018 publication American Art Pottery: The Robert A. Ellison Jr. Collection, The Metropolitan Museum of Art. The Stratton vase is a historically significant work, as the vase was exhibited at Pewabic Pottery’s public debut at the 1904 St. Louis World’s Fair.

A matte ceramic Teco vase by designer Harold Hals ended up selling for $59,375 – more than twice the high estimate of $25,000 – while a chest of drawers from Gustav Stickley made of oak, cedar and iron kept in excellent condition, only just sold past its high estimate, selling at the realized price of $62,500. Meanwhile, the Gustav Stickley tall vase clock sold for $37,500 within the estimate of $30,000-$50,000. While the modern prints offered earlier in the auction fetched a high price tag – one print from Miyoko Ito sold for $81,250 – a small group of Edward Sheriff Curtis sold well, either within their estimates or over. One such print, a rare platinum print titled Canyon de Chelly, sold for $12,500, more than twice its high estimate. In metalwork, the works of Robert Riddle Jarvie got plenty of attention from bidders: lot 157, a rare Jarvie example of a jardiniere with Alice in Wonderland characters, sold for $25,000, more than twice its high estimate of $12,000. Additionally, a pair of Jarvie Beta candlesticks sold for $9,375 – more than three times the high estimate of $3,000.

Lot 232 – a Fulper Pottery vase – a four-handled vase covered in Chinese Blue Flambé glaze from The Collection of Rich and Patty Thumann – sold for $4,550, more than nine times the high estimate of $500! 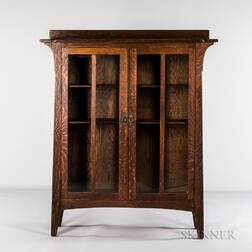