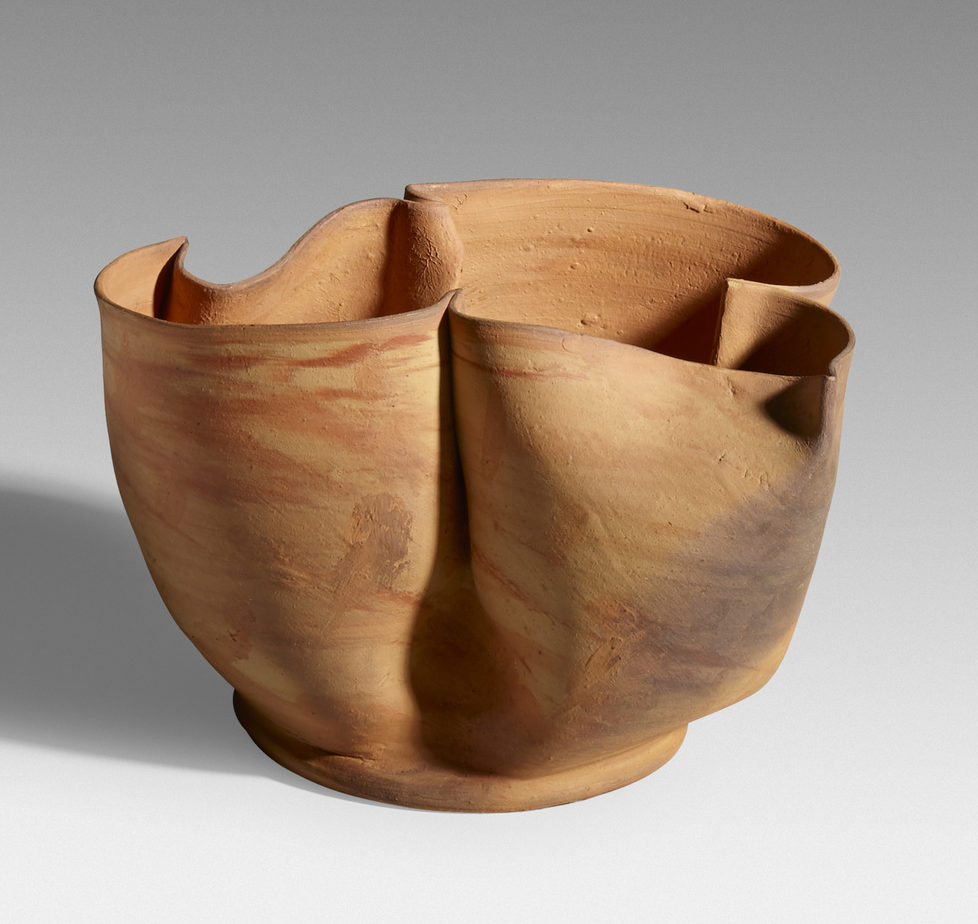 An important vase from porcelain artist Adelaide Robineau sold for more than $100,000 dollars in a new world record for Robineau’s works in one of several highlights during Thursday’s Early 20th Century Design Auctions from Rago Arts & Auction Center. Robineau is considered one of the most influential artists in American art pottery due to her talents in the difficult world of carving porcelain and her efforts in publishing Keramic Studio, a periodical for ceramic artists, along with her husband Samuel E. Robineau. Among the other high-selling items for Thursday’s auctions were a number of the forty vases by George Ohr, a number of Grueby Faience pieces, and an impressive showing for a Fulper Pottery vase with a rare “cats eye” glaze.

In lighting, Tiffany Studios lamps were well represented by a rare blue Dafffodil lamp and an eighteen lily lamp with strong sales. A Roycroft table lamp with a Dard Hunter shade and a base attributed to Victor Toothaker from the Collection of Rudy Ciccarello’s Two Red Roses Foundation and featured in the book featured in the book Arts and Crafts Lighting from the Collection of the Two Red Roses Foundation, sold past its high estimate. In furniture, a number of Roycroft furniture sold strongly, including a Davenport Settle, a wardrobe and a dresser with a mirror and the works of Gustav Stickley were well-represented by a rare wash stand and an early Morris chair. Lastly, in metalware, the works of Dirk Van Erp sold well in the forms of a tall hammered copper vase, a jardiniere and a Warty vase, which all sold beyond their high estimates. 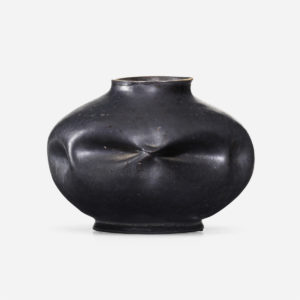 Lot 102: A signed glazed earthenware vase with a scalloped rim, ribbon handles and a rare combination of cobalt, green and raspberry mottled glazes sold for $20,000.

Lot 134: A rare vase for Grueby Faience Company designed by Eva Russell (7,000-10,000) sold for $23,750. The vase was part of an 1987 exhibition at Christie’s From Our Native Clay and additionally appeared in the exhibit literature by Dr. Martin Eidelberg.

Lot 135: Another Grueby Faience classic tile by Addison LeBoutellier: The Pines Tile (20,000-30,000) sold for $40,000. The tile was featured in a number of publications, including The Arts & Crafts Movement in America 1876-1916 and The Robert A. Ellison Jr. Collection by Alice Frelinghuysen. 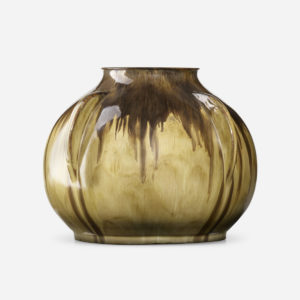 Lot 151: A University City gem with its glazed porcelain with enamel decoration and a glazed signature underneath, this vase (1,000-1,500) by Kathryn E. Cherry sailed past its high estimates to sell at $8,125. This vase also appeared in a number of publications including The Art That Is Life: The Arts & Crafts Movement in America, 1875-1920 and University City Ceramics: Art Pottery of the American Woman’s League.

Lot 156: A highlighted vase, created by Elizabeth and Mary Overbeck of the talented Overbeck sisters, who started Overbeck Pottery in 1911, sold for $43,750. The glazed earthenware vase was signed underneath and features bright colors. 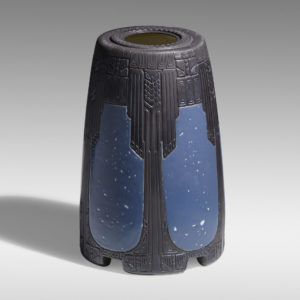 This important night lamp vase by Adelaide Robineau set a record for the artists works at Rago’s, selling for $137,500. Photo courtesy of Rago Arts and Auction Center.

Lot 167: Labelled as a “Porcelain Masterwork,” this Night lamp base designed by Adelaide Robineau, the glazed porcelain complete with intricate carving and originating from the Robineau family and several important private collections, sold for $137,500, making it the high seller of the day and set a world record for Robineau’s works.

Lot 168: A second of three Robineau vases also sold in the auction, a glazed porcelain vase (6,000-9,000) with excised decoration and incised artist’s initials and featured as an illustration within the May 1905 issue of The Craftsman, sold for $21,250.

Lot 218: A rare Verte antique-glazed vase, featuring an impressive and rare design of cattails, sold for $18,750; the vase came with an original paper label and originated from the collection of Robert A. Ellison. 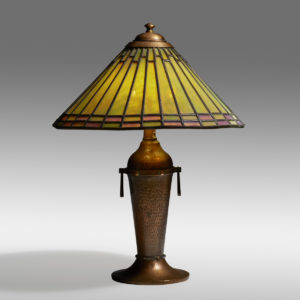 A Roycroft table lamp with a shade by Dard Hunter and a base attributed to Victor Toothaker with an impressed orb and cross (8,000-10,000), sold for $13,750. Photo courtesy of Rago Arts and Auction Center.

Lot 223: A large Fulper vase, glazed in the more intensive Flemington Green color and a paper gallery label and vertical manufacturer’s mark, sold for $5,000. This vase was additionally from the collection of Robert A. Ellison and was part of the exhibit Fulper Art Pottery: An Aesthetic Appreciation at the Jordan-Volpe Gallery.

Lot 233 and 235: Tiffany Studio lamps typically sell strong and these examples certainly fall under that category: an impressive Eighteen-light Lily table lamp (40,000-55,000) with a patinated bronze Pond Lily base and a combination of 18 hand blown Favrile glass shades each etched L.C.T., sold for $75,000. The impressive lamp has been featured in two publications. The other a rare blue Daffodil table lamp with a ‘rising sun’ patinated bronze shape (60,000-75,000), featured in three different publications, sold for $91,000.

Lot 253: A Roycroft table lamp with a shade by Dard Hunter and a base attributed to Victor Toothaker with an impressed orb and cross (8,000-10,000), sold for $13,750. The lamp was featured in the book Arts and Crafts Lighting from the Collection of the Two Red Roses Foundation.

Lot 285: Lastly, a rare wash stand from Gustav Stickley (2,500-3,500) made of oak and hand-hammered copper metalware, sold for $6,875. The two doors open to reveal storage space, a large red manufacturer’s decal is shown on the back of the stand. 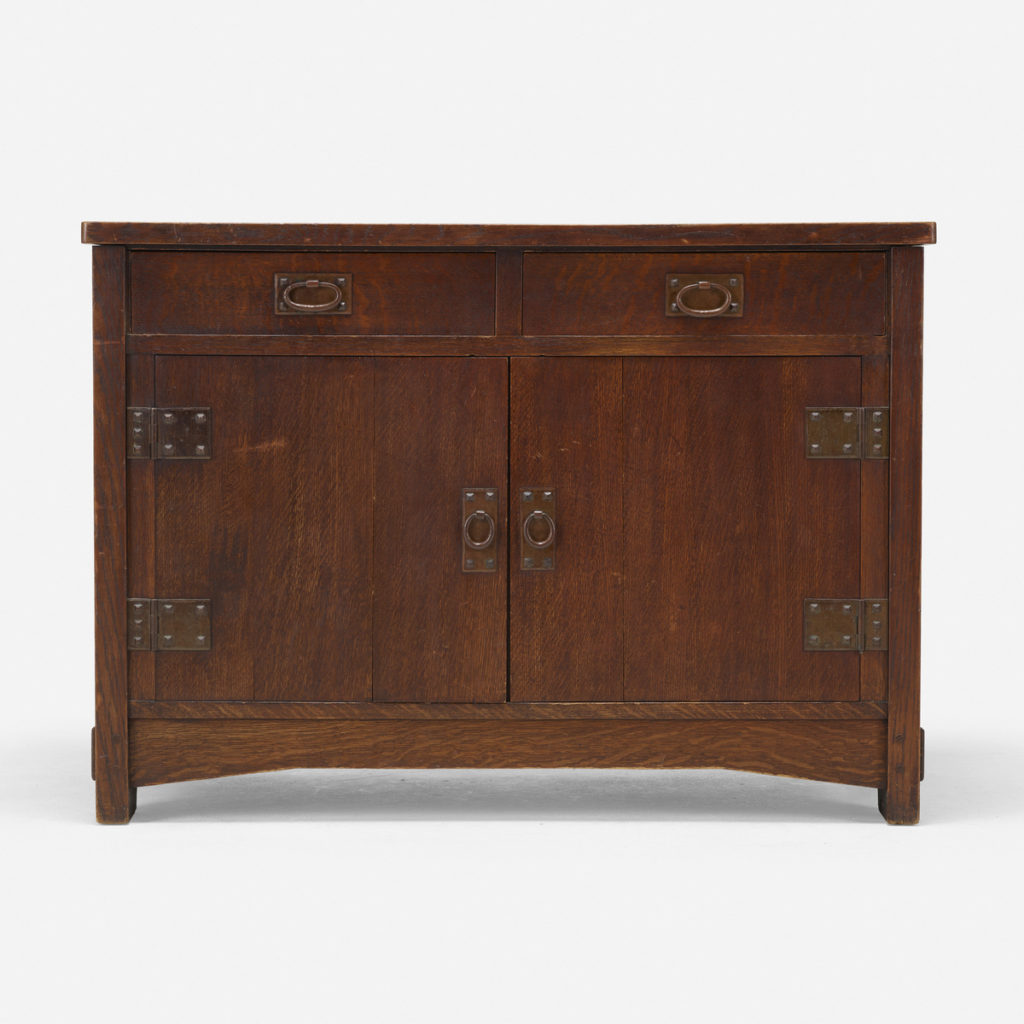 A rare wash stand from Gustav Stickley (2,500-3,500) made of oak and hand-hammered copper metalware, sold for $6,875. Photo courtesy of Rago Arts and Auction Center. 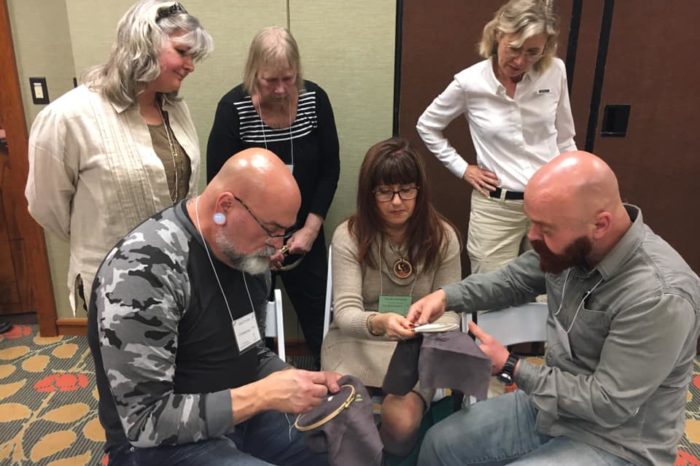 The Joy of the Craft: February Pre-Conference Workshops Announced