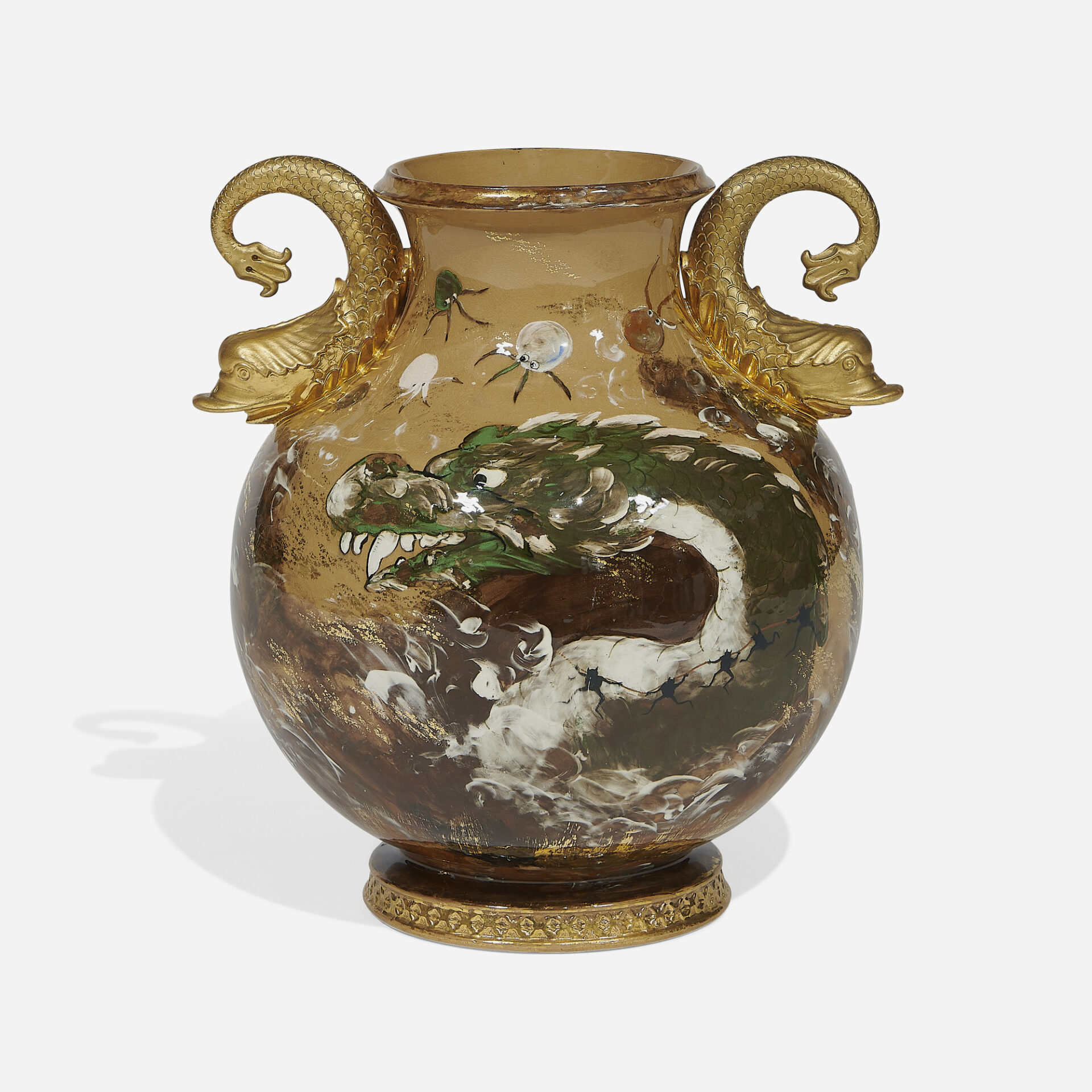 Curated by Toomey & Co’s Director of Ceramics Riley Humler, the Keramics & Rookwood quarterly auction on November 2nd will show, in its more than 400- lot inventory, a wide variety of American Art Pottery forms from the late 19th century through mid-20th century including vases, bowls, pitchers, lamps, figural works, landscapes, and decorative items.. As suggested in its name, the art pottery firm Rookwood pottery is highlighted with a number of ceramic works from the well-known of its staff (i.e. Rookwood founder Maria Longworth Nichols Storer, designers Kataro Shirayamadani and Carl Schmidt, and others.

This early and important Limoges-style vase ($7,000 – $9,000) features a snarling, toothy dragon, several demons trying to control the dragon with ropes and five muti-colored octopi on the front.

Works from Storer include a number of early and a number of Limoges-style vases – one work that happens to be both is the Early and Important Limoges style vase ($7,000 – $9,000) featuring artwork of a dragon, demons and octopi. While Storer’s designs aren’t the only in Rookwood to display the dragon, the style of Storer is marked by her distinctive style of the creature and her comma-shaped white caps according to the Toomey & Co website. Shirayamadani, another of Rookwood’s well known among art pottery collectors, is well-represented with 32 different works – the rarities include a rare electroplated incised mat vase ($5,000 – $7,000) with foliage, a set of rare blue pelican and turtle bookends ($400 – $600), and a Rare Black Iris Glaze vase with sparrows and buckeye branches on stand ($2,000 – $3,000). The latter example was also included in the Cincinnati Art Museum’s seminal exhibition on Rookwood Pottery in 199, while the electroplated incised mat vase has the distinction of having its handcarved décor electroplated with thin copper and while most of Rookwood’s electroplated works are high glazed, this example retains the more muted and softer tones of an Arts and Crafts-era work.

Shirayamadani’s production pieces are also available for bidding during the auction at a smaller cost; a rare elephant console set ($500 – $700), a covered box with a Mandarin duck ($200 -$300), or a pair of his walking bear bookends ($400- $600) are a few of the quality productions works to be found while his Ivory Jewel porcelain vases and his Vellum vases are quite lovely.

The colorful beauty of Weller Pottery is marked here by the rare and monumental; the Weller highlights are led by a large Hudson scenic vase ($8,000 – $12,000), tall, finely decorated, and designed by Hester Pillsbury. The tall scenic vase is also seen in the publication Weller Pottery: The Rare, the Unusual, the Seldom Seen. Additionally, two rare Matt Ware (Fru-Russet) vases are offered: a two-color vase with a wheat decoration ($800–1,200) and a rare vase with irises ($1,000-$2,000) along with a rare and large Xenia vase with Chrysanthemums ($800 – $1,000), and a number of Jacques Sicard works including Sicard’s rare St. Cecilia tile. 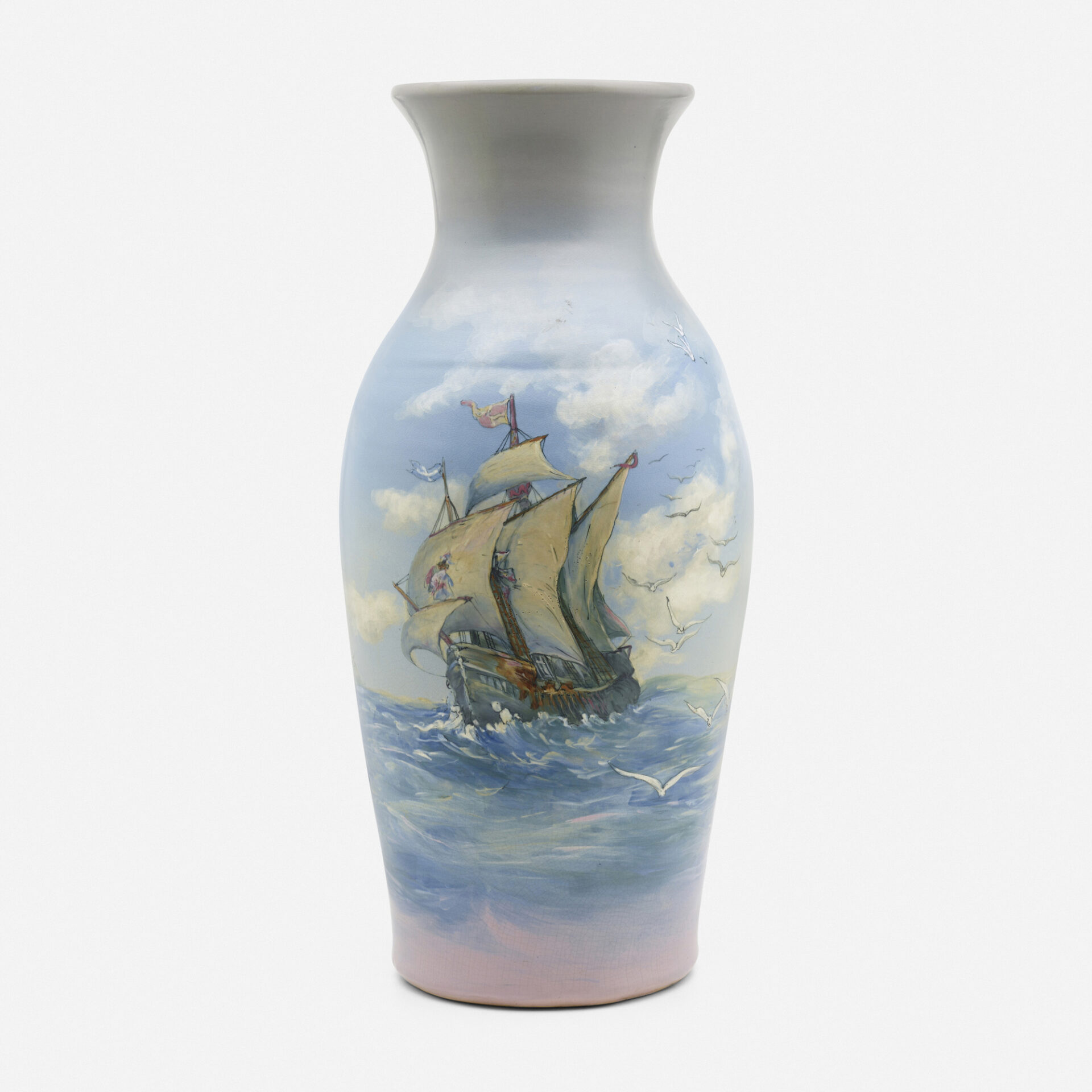 The recognizable blue and green tones of Newcomb College can be found in Wednesday’s auction; May Sydnor Morel’s Early vase with roses ($3,000-$5,000) and the live oaks and Spanish Moss vases of Anna Frances Simpson and Sadie Irvine ($2,000 – $3,000) make up the high end of the Newcomb College offerings. For those who are in the beginner stages of their collection, a number of vases with stylized floral designs and miniature vases with the designs of Sadie Irvine ($500-$700) offer a burst of color.

For more on the curated offerings of American art pottery from Toomey & Co, please click the link to view the online catalog at Toomeyco.com. 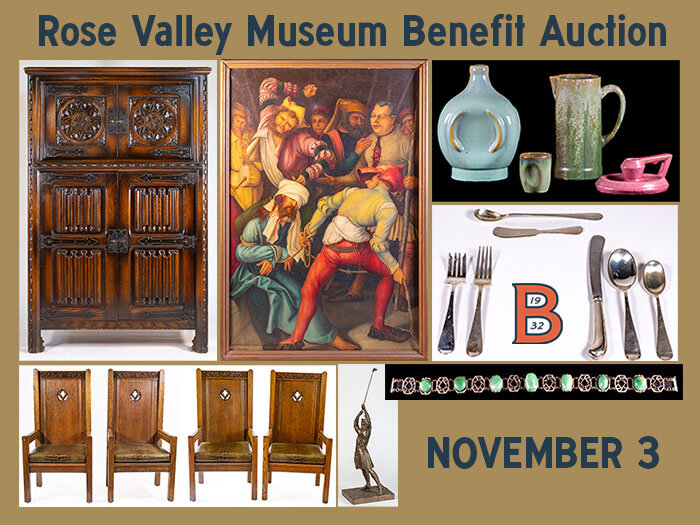 The Rose Valley Museum at Thunderbird Lodge is hosting a virtual auction on Thursday, Nov. 3, of Victorian, Arts & Crafts and mid-century modern objects, over 400 lots. The proceeds will benefit the museum’s acquisition fund and be used to defray the cost of two recently-procured Samuel Yellin chandeliers and furnishings that decorated Thunderbird Lodge in the early 1900’s.

Items range from those which may be available for $50 to those that will sell in the thousands. The Arts and Crafts offerings include a full bed frame from Gustav Stickley, handcarved furniture, Roseville, Weller, Niloak, Pisgah Forest, and Van Briggle pottery and ceramics, lamps, and stained glass works. 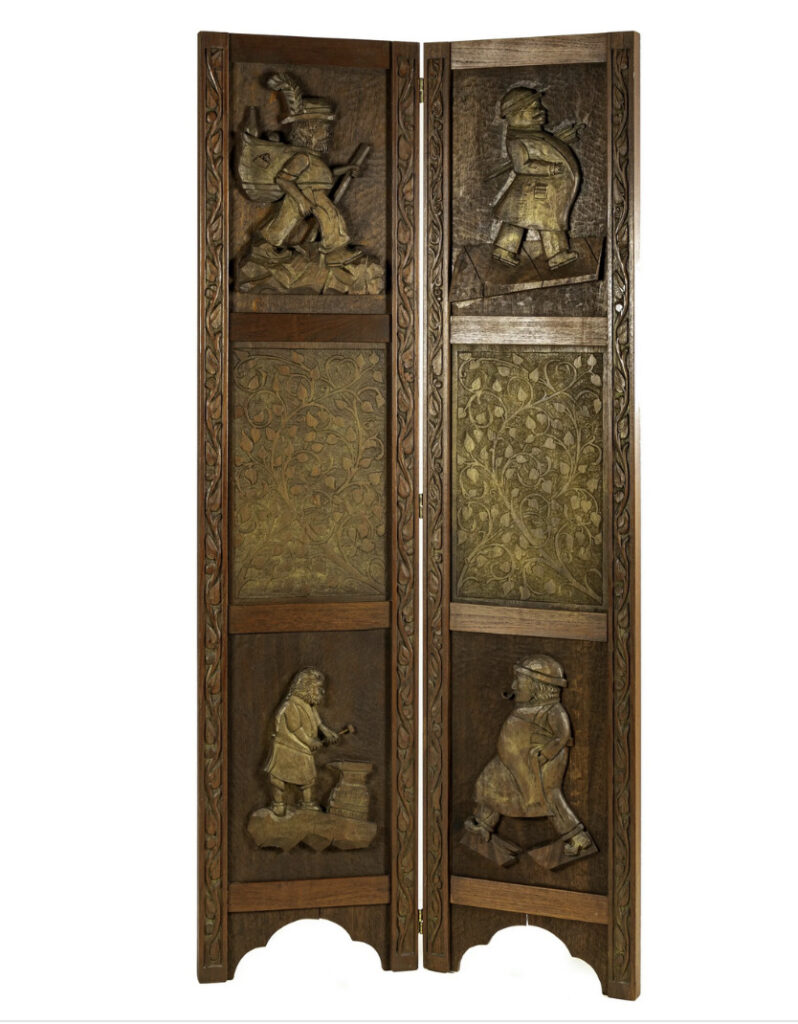 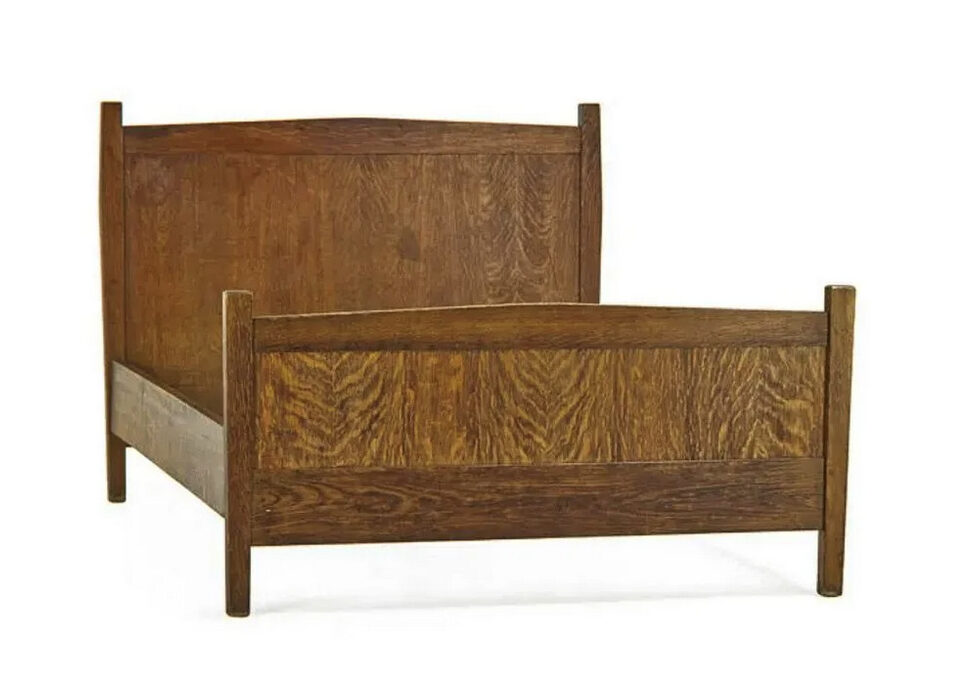 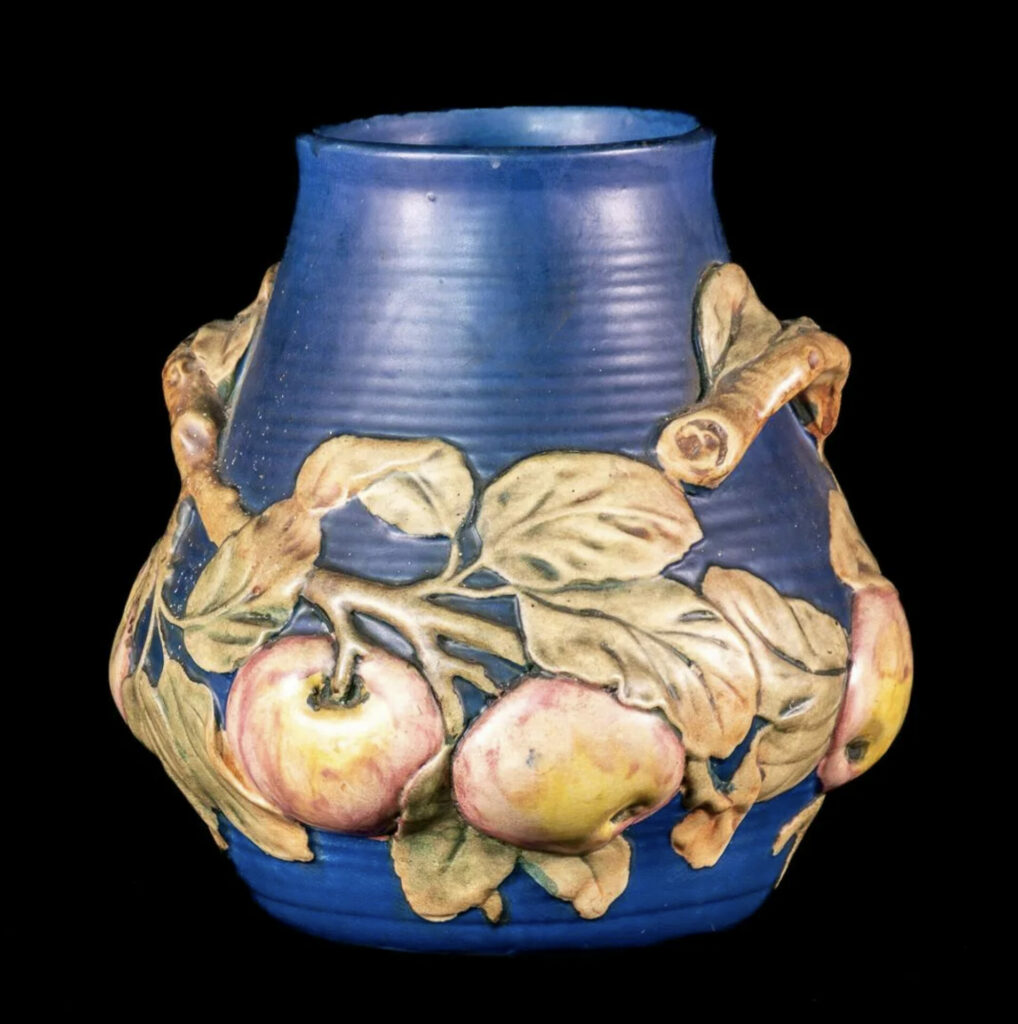 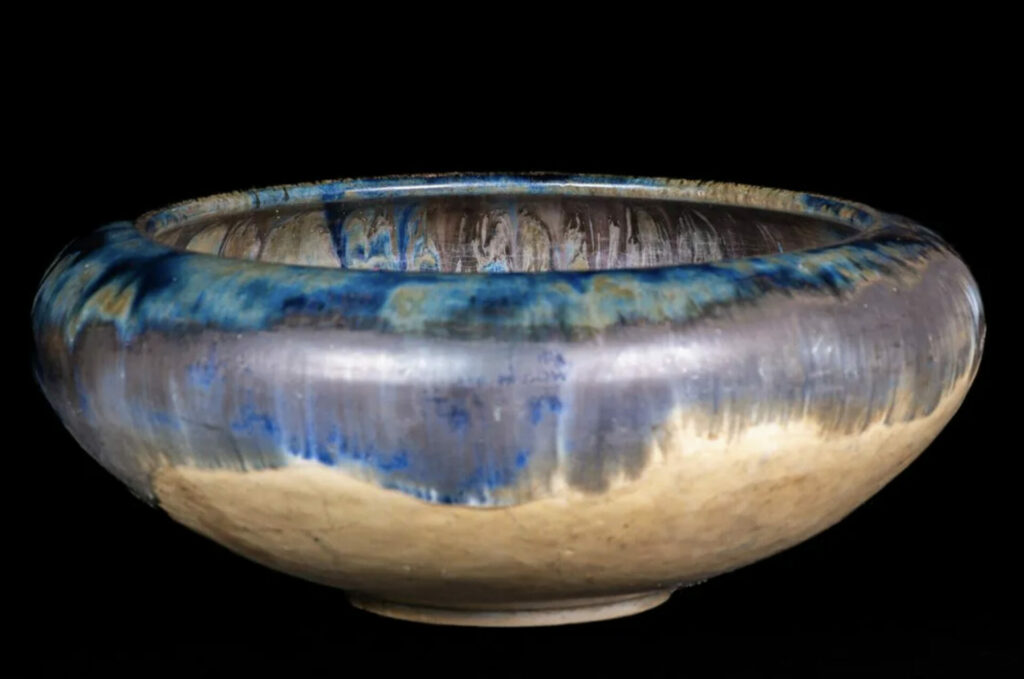 Note: If you would like to bid, please register in advance to give the auction house time to do a credit check.

View the online catalog at LiveAuctioneers.com 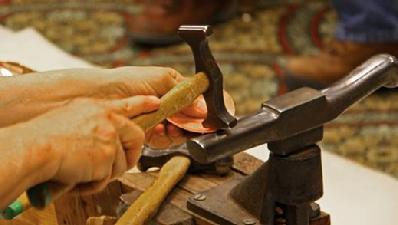 Learn About Cuerda Seca Ceramic Technique and The Lamps of Limbert in February!