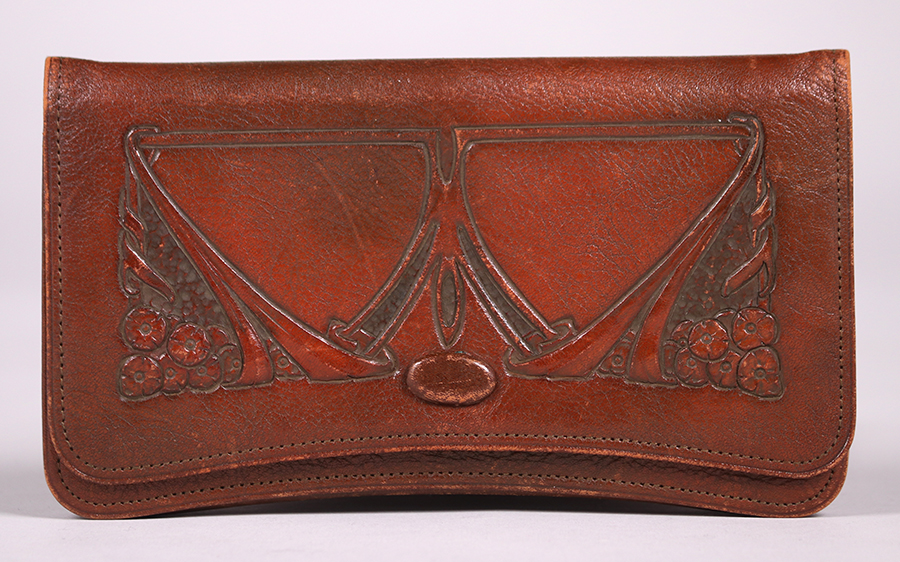 Date of original publication: April 19th, 2021. This article has been re-published.

Elbert Hubbard was truly a Renaissance man. While the reputation of the Roycroft Campus was gaining momentum, Hubbard’s interest in all things handmade grew into several mediums and materials. While the Hubbard name is known today for Roycroft furniture and copper, Hubbard’s interest in book publishing, and the development of the Roycroft Print Shop, would trigger the beginning of utilizing leather in books, desktop accessories and other Roycroft objet while making the Roycroft a household name.

His interest in book publishing – inspired by a tour of William Morris’ Kelmscott Press in Hammersmith – led to Hubbard exploring the process of book publishing at Roycroft. Naturally, Hubbard’s desire to not only replicate the success of Kelmscott, but to surpass it, required him to hire new talent to help him realize this dream.

Hubbard hired two men that combined talent in leather and bookbinding to usher in a new medium for Roycroft. In 1896, Hubbard hired German-born Louis Kinder to head the bindery division of the Roycroft printing shop, train apprentices, and help Hubbard usher in a new era of leather-bound books. Meanwhile Philadelphia leather artist Frederick C. Kranz exhibited at the Art Institute of Chicago, where he displayed three impressive sculptured and modeled leather screens and an Atlas book cover. While there is no proof that Hubbard and Kranz met at the Chicago event, in 1903, Kranz was made organizer of the modeled leather department at the Roycroft print shop. 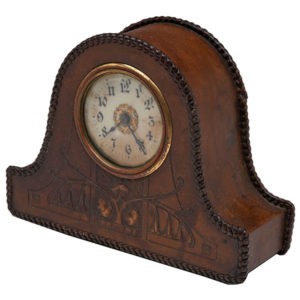 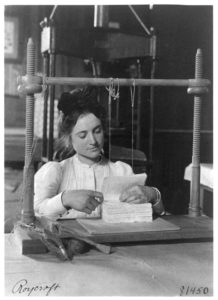 The style of leather art atop books was known as “Buffalo Nouveau,” named for a city that provided great amounts of leather due to its vast number of tanneries. This newly found art form of leather binding became popular with customers of the Roycroft name; the intricate floral and nature-inspired designs attracted far more than anticipated: more than 50 employees were designated to book production and an extension of the print shop was created to handle the demand for more.

The popularity of Roycroft’s special leather-bound books led to developments in other leather objects, including placemats, purses, bookends, and desktop accessories. These items were included in the Roycroft-produced publications the Philistine, Little Journeys, and The Fra and later in and later in 1905, the Roycroft Catalog. By mid 1908, offerings included wastebaskets, portfolios, fire screens, pillows with tassels and photo cases and frames.

The Roycroft print shop became an educational and skill development resource to young immigrant German men and women, due in part to Louis Kinder and Frederick C. Kranz’s German roots. The German work ethic became a way of life in the Roycroft campus. Young women found themselves supplementing their knowledge of design basics with the process of leather sculpting. Several leather artists of note included George ScheideMantel, an apprentice to Kranz who would eventually take over for him, and Otto Hilt, who would leave the Roycroft and become the technical director of The Cordova Shops of Buffalo.

Eventually Roycroft copper found its way into leather purses as Dard Hunter and Karl Kipp contributed to a line of modeled leather handbags with frames of copper and trimmed in silver.

Of course, after the sinking of the Lusitania in 1915, the Roycroft workers were left reeling. The Philistine magazine had its last magazine edition in July 1915. Despite son Bert Hubbard’s best efforts to save his father’s leather legacy, the 1929 depression resulted in the halt of Roycroft leather goods production.

However, the legacy of Arts and Crafts leather continues as communities of collectors and Arts and Crafts enthusiasts purchase both antique and contemporary leather goods to this day. Owner of Edwardia antiques Denise Burns says “Roycroft is regarded as the gold standard of modeled leather items from the American Arts & Crafts era. European offerings never matched the exquisite tooling, innovation of design and hand craftsmanship of the Roycrofters.” Roycroft appraiser and expert Robert Rust also credits the popularity of antique leather to the quality of craftsmanship and the high levels of quality standards put in place by the Roycroft founders. “Their leatherwork was sold throughout the country. The widespread popularity was absolutely due to the fact that the works produced were really well made.” Rust particularly notes a modeled leather purse found advertised in The Fra with a hand-hammered copper and silver frame set with cat eyes.

Thank you to Daniel Lees’s book Artistic Leather of the Arts and Crafts Era for the background on Roycroft’s contributions to leather works within the movement. For more on tips on collecting Roycroft leather, please see our earlier article on Arts and Crafts leather “Hand-Tooled Leather: The Forgotten Collectible”

Additional thanks to Toomey & Co Auctioneers, California Historical Design and Wikimedia Commons for the images. 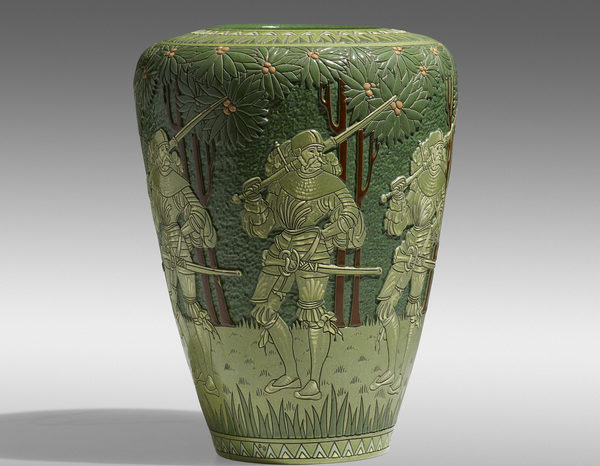 The Styles of Frederick Hurten Rhead and More at Rago's