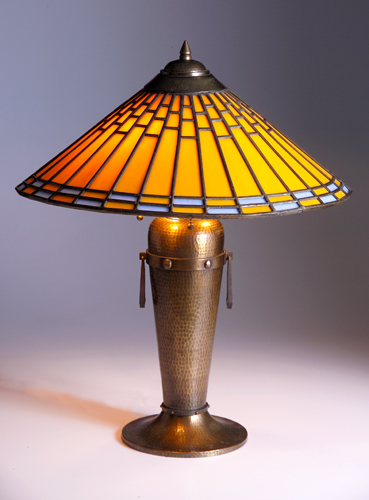 Editor’s note: this article is a re-publication of an article originally published September 20th, 2011. (nearly 1o years ago!) Continuing our exploration of Roycroft, this article focuses on the table lamps – an amalgamation of colorful leaded glass and hand-hammered copper bases – created through the talents of the hardworking artists at Roycroft led by Karl Kipp and Dard Hunter. This article has been updated with larger photos. 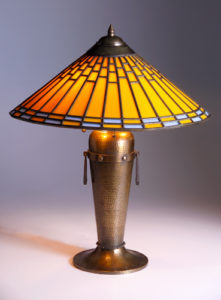 Exceptional and rare leaded glass and copper lamp, circa 1920-1928. This one has a cool combination of yellow and blue glass on a brass finish base. About 22 inches high by 18.5 inches wide. Courtesy of Roycroftcopper.com.

With the teaming of gifted designer Dard Hunter and coppersmith Karl Kipp at the Roycroft Campus around 1909, the fledgling Art Copper Department was poised to enter its most creative and productive era. While the metalsmiths working under their direction in the new fieldstone Copper Shop spent most of their time hammering out bookends, candlesticks, small vases and desk sets, a limited number of electric table lamps were also being created.

One desk lamp that became extremely popular is known today as the ‘helmet’ lamp, a reference to its solid copper domed shade. Both the shape of the shade and the overall height of this desk lamp varied from year to year, with most models standing between 13″ to 16″ tall. The copper shade effectively directs all of the light from the single bulb down onto the hammered copper base, showcasing the work of the craftsman, but making it virtually impractical for lighting a room. Depending on condition, these typically sell in the $1,500-$2,500 range. 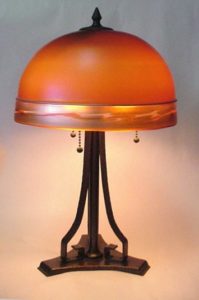 While not much taller, the copper and mica shade lamp has both a wider circular base and a larger circumference of the shade, giving it a more rooted appearance (top photo). The addition of the mica banding emits more light and provides an attractive contrast to the hammered copper. The strap-work running from the top of the dome over the mica band is further evidence of the skilled metalsmiths at work in the Roycroft Copper Shop and helps push this lamp into the $2,500-$4,500 range.

Beginning around 1920 the Roycrofters began purchasing art glass shades from the Steuben Glassworks for use on their table lamps. Four different models were pictured in the Roycroft catalog. The combination of the soft glow from the Steuben shades and the hammered copper bases have made these lamps extremely valuable. Depending on the condition and style of both the shade and the base they can range from $4,000-$9,000.

Just as any piece of Gustav Stickley furniture with an arch gets credited to Harvey Ellis, it seems like any Roycroft lamp with stained glass gets credited to Dard Hunter, even though Hunter left East Aurora in 1910. Before he did, however, he collaborated with Karl Kipp on a small number of leaded glass shades on hammered copper bases, the majority of which were used in Elbert Hubbard’s office or in the Roycroft Inn. Prices for these rarities start at $7,500 and quickly escalate. 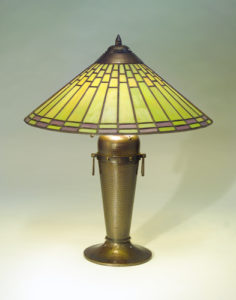 Leaded glass and copper lamp, circa 1920-1928. Photo courtesy of Roycroftcopper.com

Hubbard hired coppersmith Victor Toothaker after Karl Kipp and Walter Jennings temporarily left in 1912. Toothaker is best known as the designer of the Roycroft lighting fixtures in the 1913 Grove Park Inn in Asheville, N.C. Toothaker may have also designed the geometric shade or it may have been adapted from one left at Roycroft after Dard Hunter had departed. This lamp remained in production through the 1920s, but is still considered extremely rare, generally selling above $10,000.

Note: Roycroft bases that have lost their original shade are generally worth around 50% of the same base with an intact, original shade.

For a more complete discussion of Roycroft lighting, please go to http://www.roycroftcopper.com/lamps.htm. 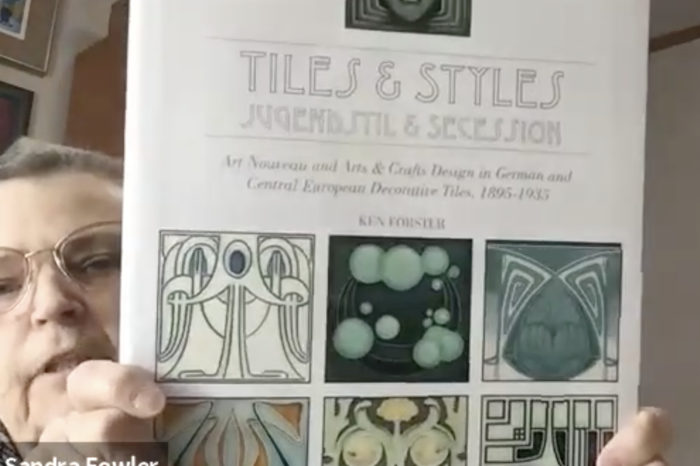 The Importance of Connecting: Small Group Discussions in the Era of Covid