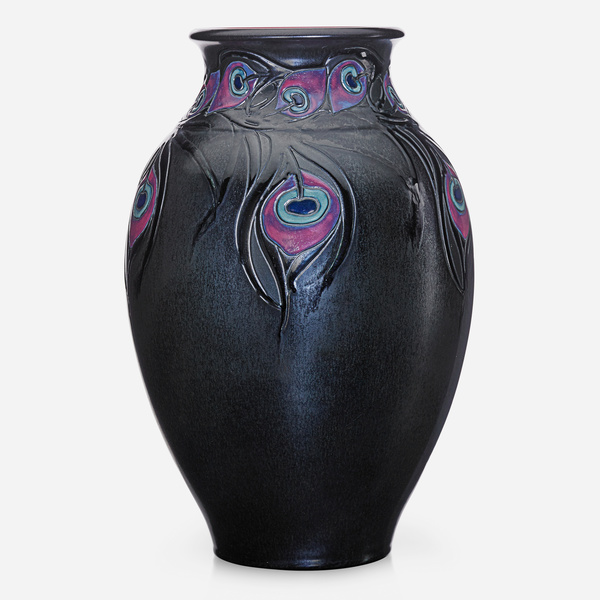 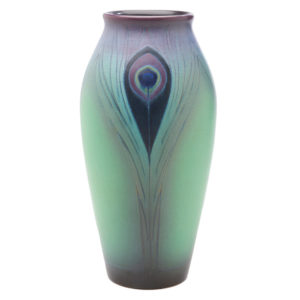 One of the most well-known American art pottery firms of the 20th century, Rookwood Pottery was bringing pride back to art pottery. At the turn of the century, Rookwood Pottery had just come off a win from the Paris Exposition in 1900; a Grand Prix win to be exact since the debut of their new Iris glaze was seen in a favorable light. One of the many artists who were masters of glaze and who carved out her own specialties at Rookwood was Cincinnati born and bred Sara Sax, who joined the firm in 1896 and during her 35-year term would become known for her French Red glaze, her mastery of the Rookwood glazes including Vellum, and her affinity for peacocks and peacock feathers for decoration.

Sara often signed her name on ceramic pottery with a monogram style of initialing of SX with the X going through the tail of the S. While Sara was front and center for the beginning of the Art Deco movement, she earned her stripes and contributed many important vases during the Arts and Crafts era, alongside her fellow artists, that now have their place in several important art pottery collections because of their bright and gorgeous designs.

In the early years of Rookwood, the focus was on “signature” glaze lines, the first being a yellow-tinted translucent high gloss glaze over slip-painted decoration on more nature inspired hues, green and brown being the most common. As Rookwood came closer to the 20th century, the high gloss – soon to be award-winning – glaze lines were born from blues and sea green hues. The forms of the vases would soon evolve from the earlier Japanese-inspired forms and along would come Native American portraits, sea faring vessels, landscapes, and a multitude of flora and fauna. Having joined the firm in 1896, Sara would earn her stripes producing the early forms, but her hallmark forms would come in the later years, when her growth as an artist would bloom with her use of glazes and peacock feathers. 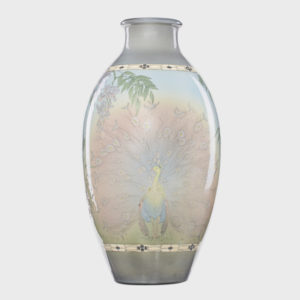 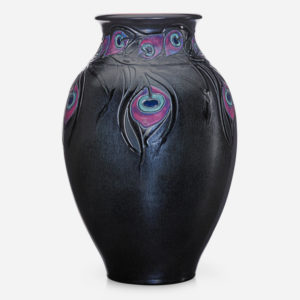 In addition to the many glazes of Rookwood, the later decorating motifs would be largely influenced by flowers and exotic animals. While the Iris glaze was still holding strong – and Sara would make a number of large high quality Iris glazed vases – peacocks and peacock feathers were common decorating motifs for Sara’s vase designs. The above examples sold at Rago Arts and Auction Center within the past five years: the Massive Ivory Jewel Porcelain vase with peacock, bird of paradise, and wisteria ($4,000 – $6,000) sold for $4,375 and the exceptional, rare, and large vase with an interior french red design ($8,500 – $12,500) sold for $13,750 due to its impressive size and its rare size. 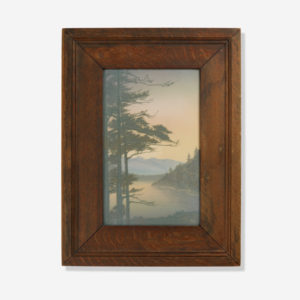 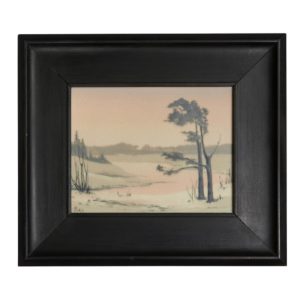 After the successful debut of the Vellum glaze, these signed scenic Vellum plaques were unveiled a year later. After the decision to frame and wall mount them, these plaques became hugely popular starting in 1912. While production unfortunately dropped for the scenic plaques after the Depression, this line, which Sara contributed to often, would be popular for four decades. Today, the framed Vellum scenes, such as the above examples both signed by Sara herself, would sell for a $10K+ price point. 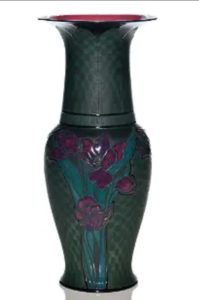 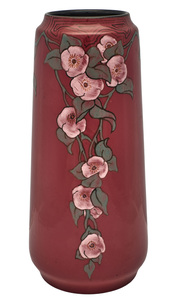 According to the website TheKing’sFortune.com, an art glass and pottery vendor, Ms. Sax’s French Red ceramic vases are considered exceptional and rank highly by collectors. Shown in both the exterior form and interior form, the French Red glaze was used nearly exclusively by Sara in her ceramic designs. The rich red color comes from the oxide that the firm imported directly from France in the 1920s. Due to the cost of the glaze, very few vases were made with this rare glaze; Sara, however, made full use of it. The exterior design on the above example on the left was incised and painted tulip decoration done in both matte and gloss glazes by Sara in 1921. These vases today often are valuable additions to important collections. 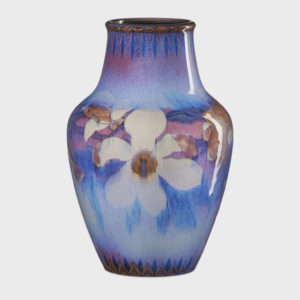 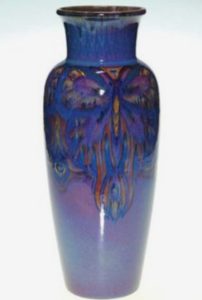 Rookwood in 1920 would introduce its Black Opal glaze line, which produces a bluish iridescent glow under a light. While Rookwood artists like Kataro Shirayamadani would produce significant examples of the Black Opal glaze, Sara additionally mastered this glaze and made vases like the above examples.

Because of the important examples that Sara made during her 35-year career at Rookwood, the catalog of early Rookwood vases are all the better for it. Her designs brought a passionate and colorful flair to the firm’s catalogue; the record selling price for a Sara Sax vase is $31,500 and four of her works were featured in the 2019 exhibition Women Breaking Boundaries at the Cincinnati Art Museu. Sara Sax continues to be one of the most celebrated female artists in Rookwood’s early history as her designs are extraordinary and contribute so much to the legacy that is Rookwood.

For more on Rookwood and the artists that helped contribute to the legacy, see Bob Batchelor speak at the American Art Pottery Association Convention and Show April 27th – May 1st, 2022. Click here to visit the AAPA website. 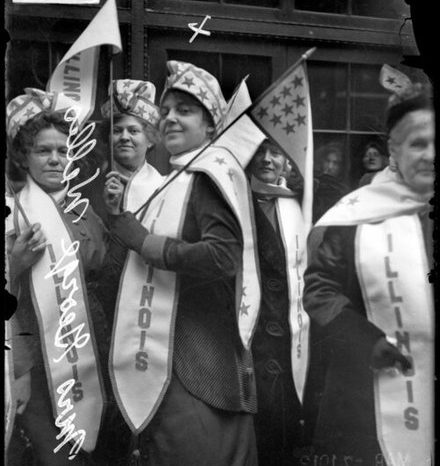