This article has been re-published. Original date of publication: August 25th, 2014.

As a historian, it’s always fun to stumble across information that runs counter to popular belief.

Realizing, for instance, that William Morris did not invent the Morris chair. He just named Philip Webb’s invention after himself. (And Webb was his friend!) Webb may not have protested too loudly, however, for he had ‘borrowed’ the idea from Ephraim Colman in rural Sussex and taken his version to show Morris in London.

And the rest is history….

An ad created by Stickley in 1898, advertising his simple Shaker and Windsor chairs.

As I was tracking down yet another obscure shopmark, I came across this ad placed by Gustave Stickley in 1898. Gus had first learned to make simple Shaker and Windsor chairs at age 18 in his uncle’s factory, where he rose to become foreman before breaking out on his own in 1888, eventually moving to Syracuse in 1896.

That year ads began appearing in trade journals for an assortment of styles of furniture offered by Stickley & Simonds and, soon thereafter, The Gustave Stickley Company. These, however, were not early versions of the furniture that would make him famous. Instead, these were copies of furniture styles Gus would later condemn for their meaningless and needless ornamentation: “white-painted wood with carved, gilt decorations, cabriole legs, pierced arm supports, curving stiles and cane seats… backrests decorated with painted putty, ribbons and garlands.”

Some they may have purchased from other firms and sold through their advertisements. The majority, however, were mass-produced using every available piece of power equipment to turn, carve and decorate elaborate chairs and settees, some of which were purchased by the Waldorf Astoria Hotel in Manhattan. By 1898 Gus had made enough money to buy his partner out and, as was his lifelong inclination, take control himself.

The winds of change were blowing, however, and people began to tire of what one writer has called these “muddled furniture styles.” Word that a new style called Arts & Crafts was brewing in England, one championed by William Morris, prompted many furniture designers to take a hard, critical look at what was now simply sitting in their showrooms.

And just as Morris was not the first to produce a Morris chair, Gustav Stickley (he had dropped the final “e”) was not the first to produce American Arts & Crafts furniture. That distinction, though nearly forgotten, belongs to the Tobey Furniture Company of Chicago. But Gustav Stickley adopted the new style with an aggressiveness rarely witnessed and, with the addition of his own magazine, The Craftsman, soon shot to the forefront of the new movement.

But what about those tens of thousands of fancy, ornate, carved chairs Gustav Stickley had mass-produced for nearly a decade?

All, it seems, were sold without a shopmark. Thousands of them must still exist, but so far no one has shown any interest in identifying them through comparison to those illustrated in his ads. We may have walked past them in antique malls, chuckling, perhaps, at their often ludicrous decorations as we scoured each booth looking for a rare example of early Gustav Stickley furniture. 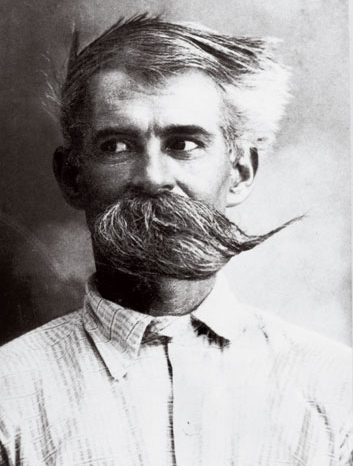 The Eccentric Ohr: A Profile in "Unbridled Creativity"