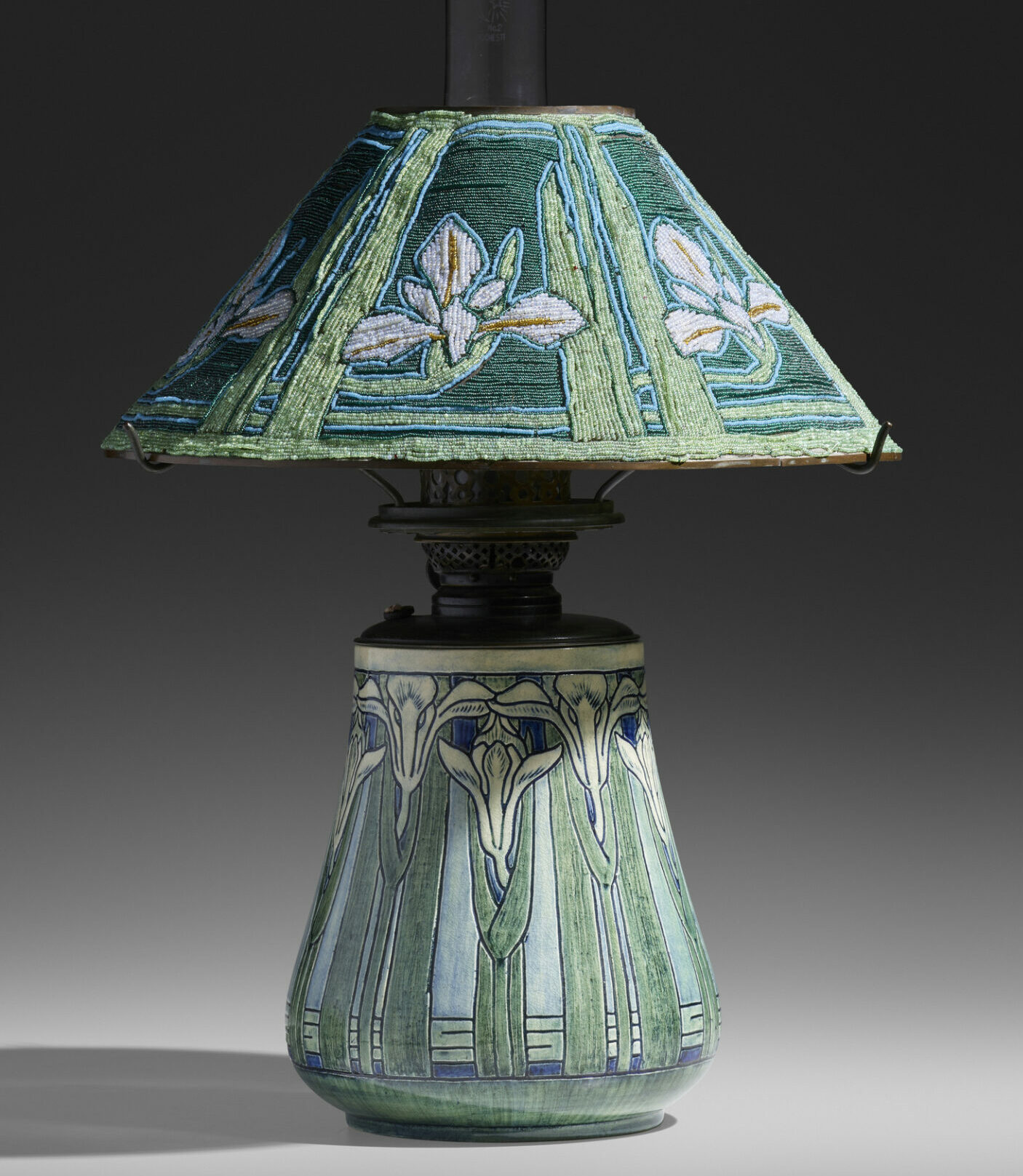 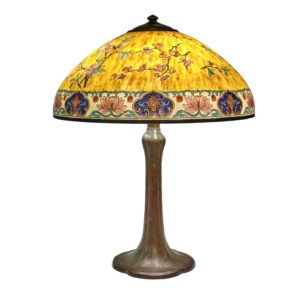 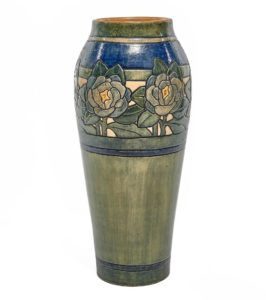 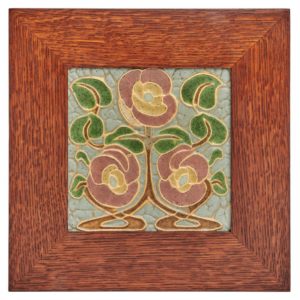 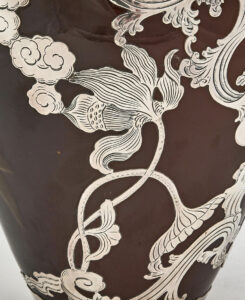 An example of silver overlay on the Rookwood vases during Treadway’s auction.

In a 325-lot catalog, a Newcomb Vase stood taller than the rest; the signed vase, decorated by Newcomb College artist K.S. Wraight ($7,500 – $9,500) and originating from a collection in Maine, sold for $11,000. One of six Newcomb College items offered, the vase was shown as beautifully preserved and stood out as a tall example by a talented and early artist.

As expected, lighting also was represented well: one example of a Tiffany Studios lamp ($5,500 – $6,500) with a bronze base, a favrile glass shade, and an etched signature sold at $7,500, while a Handel lamp with detailed and fine artwork on the shade (see above) sold for $5,000.

In more ceramics results, the works of Rookwood sold well: the vintage silver overlay examples of Rookwood were able to fetch the highest prices as a signed vase by Rookwood artist Harriet Wilcox ($2,000 – $3,000) with the detailed overlay sold for $3,000 and a signed liddel vessell by Matt Daly ($1,500 – $2,500) sold within the estimates with a hammer price of $1,600. As the auction did take place in Cincinnati, a wide array of Rookwood was offered not just with silver overlay; a signed Rookwood Pottery plaque ($2,000 – $3,000) by favorite artist E.T. Hurley in its original frame sold within the estimates at $2,300. The unusual in Rookwood offerings was shown as well: a brown matte vase carved and decorated by Albert Munson went for a hammer price of $600, blowing past the $250 high estimate. Similarly colored, a Grueby vase with an “oatmeal” toned glaze and TWO original paper labels ($700 – $900) sold for $1,300.

As you’ll read below, the works of Frederick Hurten Rhead have made a resurgence into the auction world in recent years – one example of his work from his years in Santa Barbara ($3,500 – $5,500) made an impression on collectors and sold for $4,000 witihin the estimates.

One lovely surprise was the framed Wheatley Pottery tile (pictured above), a glazed ceramic tile with a sweet pink floral design was the object of desire in a fierce bidding war that turned an initial $350 starting price into two thousand. The tile was held in a new quality Arts & Crafts wooden frame.

As metalwork and enamel boxes are particularly popular at Treadway, a pewter and enamel box ($1,200 – $1,700) designed by Charles Fleetwood Varley for Liberty & Co. had a selling price of $2,100. The detailed box showing a beautiful ocean view was signed by the artist and in very good condition. Meanwhile, another Arts & Crafts box made of copper with Ruskin inserts ($350 – $450) sold for a respectable $700; this box was in its original condition and displayed an impressive patina. In one of Tiffany Studio’s several appearance, one unusual came in the form of a bronze vase with a leaf/plant design ($600 – $800); collectors swept past the high estimate with bids and bronze vase sold for $1,600.

To see the remainder of the Treadway catalog, click here to see the results. 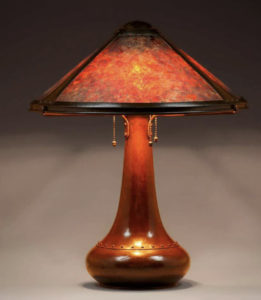 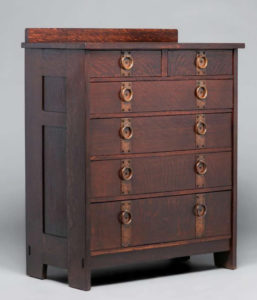 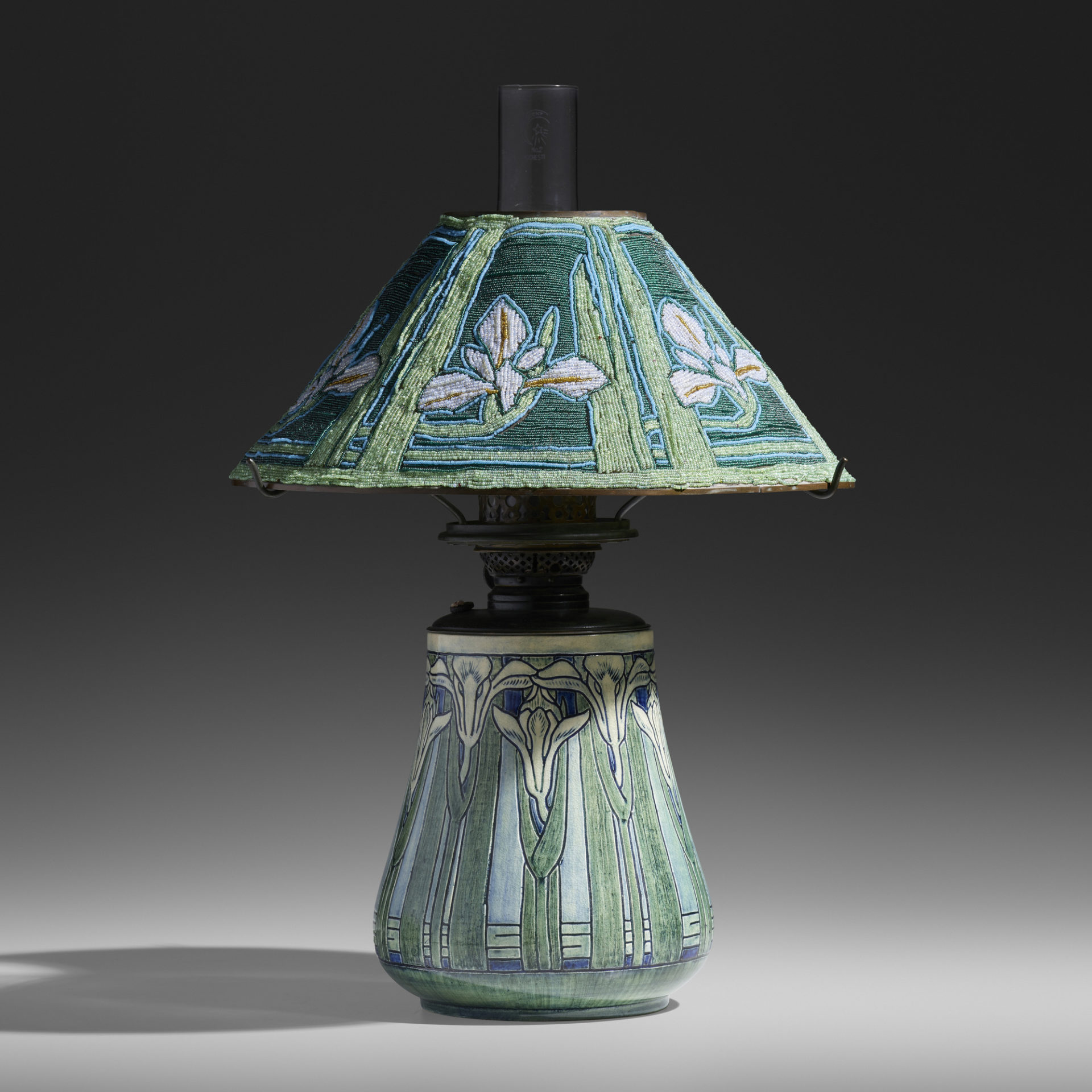 At Rago auctions, collectors can always expect a wide array of American art pottery on display from experts in the field and with another world record achieved, this auction did not disappoint. An important lamp from Newcomb College artist Mary Sheerer ($100,000-$125,000) blasted past its estimates to arrive at the $262,500 selling price; the work has appeared in the 1987 exhibition The Art That is Life: The Arts & Crafts Movement in America, 1875-1920 and the historic 1904 Louisiana Purchase Exposition in St. Louis, MO and has been featured in a number of publications about Newcomb Pottery.

In a special essay written by Dr. Martin Eidelberg for the historic lamp, Eidelberg praises the lamp as a perfect example of the Arts and Crafts movement as he writes “…the Iris lamp unites the useful and the beautiful: it sheds light in the darkness and brings joy to the beholder. Comparable Newcomb lamps cannot be found. Indeed, as far as is known, this lamp is the only extant example of such work from the Newcomb Pottery.“

The lamp currently holds the world record for a selling price for a Newcomb College work; the previous record was set in 2009 for a Marie de Hoa LeBlanc high glazed vase which sold for $169,200. 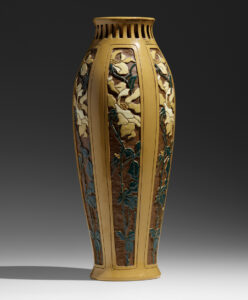 The Newcomb lamp wasn’t the only ceramic work considered the spotlight. The rare works of Frederick Hurten Rhead were represented exceptionally well in many cases sailing past their high estimates; it appears the phrase “Rare” and “Della Robbia-style” worked out especially well in this auction. Among the several Rhead vases with stylized floral patterns, there were a number of notable works: Rhead’s exceptional vase ($35,000 – $45,000) with the Della Robbia-style design nabbed an $87,500 selling price while a Rare Della Robbia potpourri jar with stylized blossoms ($15,000-$20,000) sold for $30,000, his Rare and Tall reticulated Della Robbia vase with wild roses ($12,000 – $16,000) sold fetched a $23,750 price tag, and his Della Robbia vase with stylized arabesques and tulips ($6,000 – $9,000) sold for $16,250 to name a few.

Speaking of rare vases with floral patterns, a vase by Hugh C. Robertson of Chelsea Keramic Art Works ($6,000–9,000) labelled “Rare experimental vase with tulips” got plenty of attention selling for $30,000. The vase, originating from an important private collection and from the Lillian Nassau collection, this vase was featured in Martin Eidelberg’s book From Our Native Clay: Art Pottery from the Collections of the American Ceramic Arts Society. The work of Adelaide Robineau was presented in the form of an exceptional vase with a reticulated stand ($12,000 – $16,000); the crystalline-glazed porcelain, previously part of an important collection, sold for $56,250. A vase by Mary Yancey for Iowa State with sweet blue daisies kept the bidding going as the estimates of $13,000 – $18,000 were quickly surpassed and ended with a $38,000 hammer price. Finally, the artistry of Russell Crook did not go unnoticed. From a private collection in New York, a stoneware vase decorated with elephants ($6,000 – 9,000), exhibited with JMW Gallery and Craftsman Farms and featured in exhibition literature, sold for $30,000. However, the rare and large tile Crook created for Grueby Faience Company ($9,000–14,000) featured in Montgomery’s The Ceramics of William H. Grueby sold for a fantastic $50,000. A similar example of a panther is held in the permanent collection of the Two Red Roses Foundation. 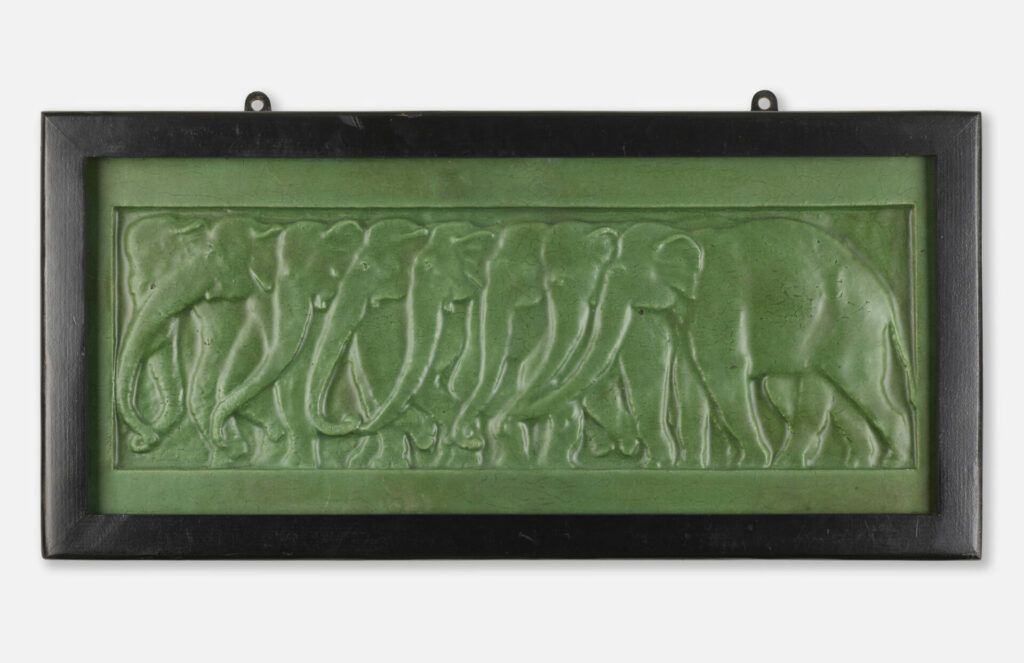 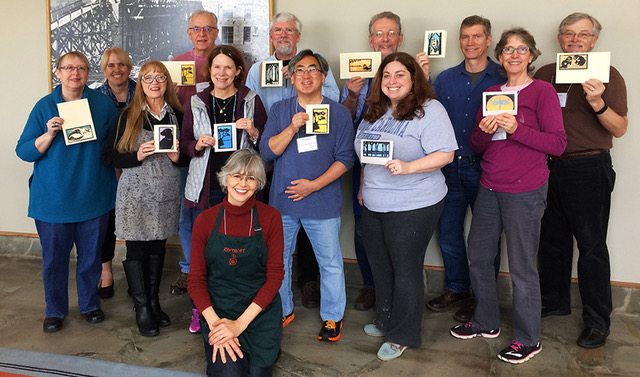