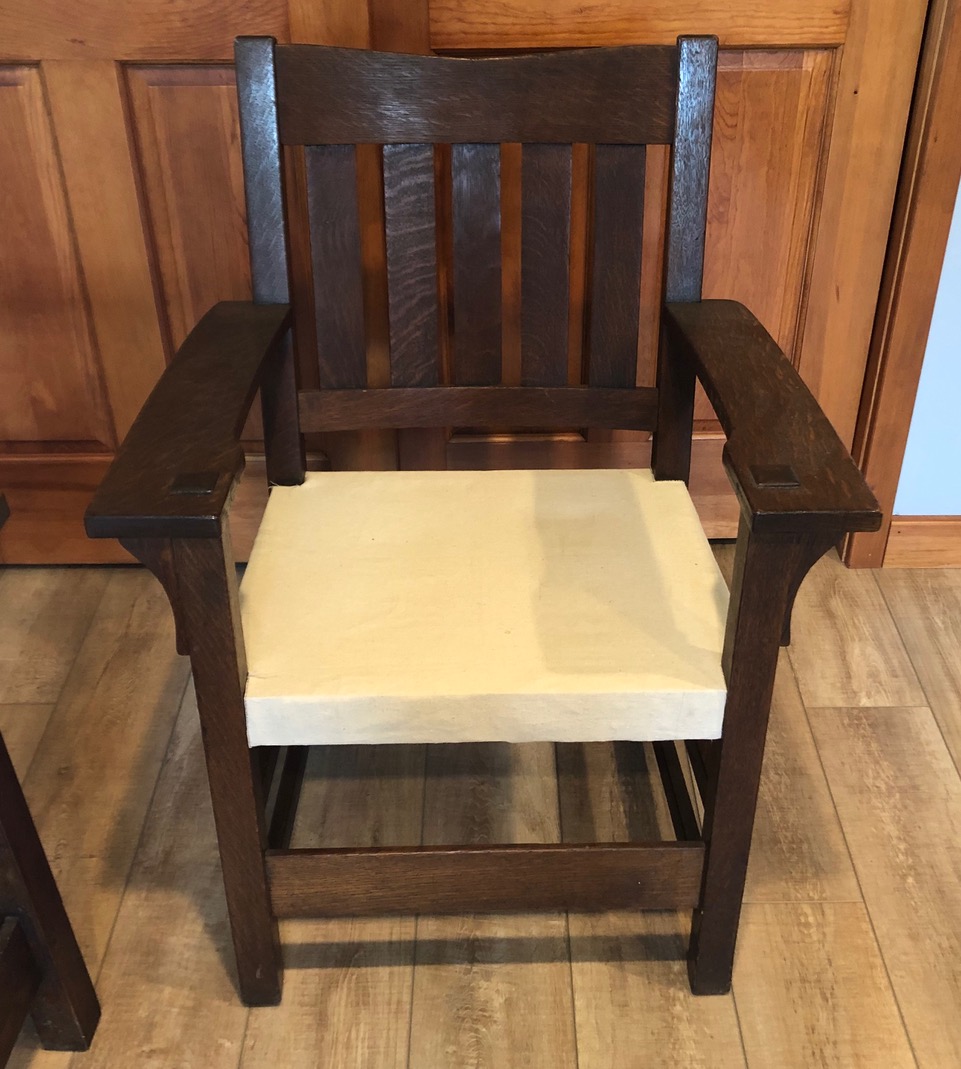 In 1909, Gustav Stickley wrote of his V-back armchair, “No better example of the Craftsman style can be found than are shown in this chair….” 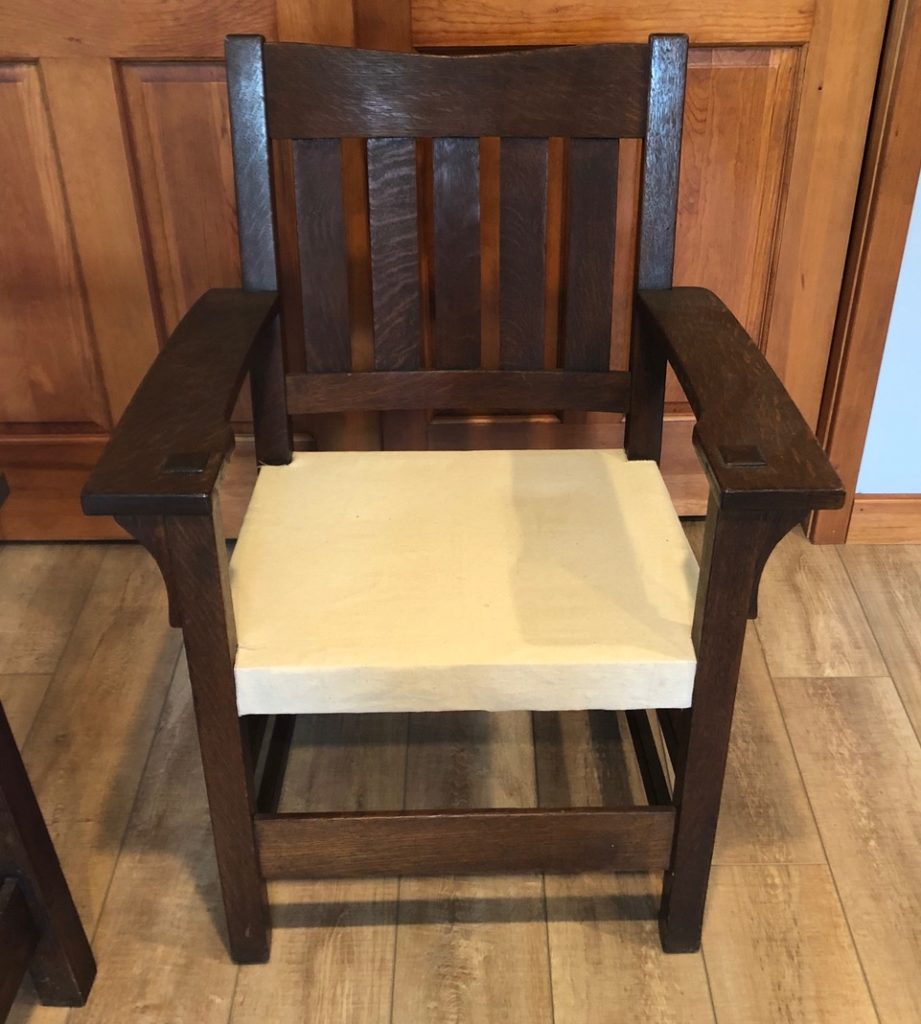 As early as 1981, author and noted authority David Cathers wrote of Stickley’s V-back armchair, “The V-back chair, so named because of the flattened “V” of its toprail, while modest at first glance, is perhaps Stickley’s most nearly perfect chair design. Everything about it is right. Over the years of its production, the chair changed very little. Stickley liked to say, somewhat smugly, that many of his designs could not be improved upon; the V-back makes an excellent case in point.”

Clients had the opportunity, either through retail stores or Stickley’s mail order catalogs, to order the three pieces – the 48” settle, matching armchair, and rocker – individually or as a set. In addition to the V-back toprail, the three pieces shared several of Gustav Stickley’s classic design elements: highly-figured quartersawn oak, vertical back slats, wide front and rear stretchers, pegged front corbels, and exposed tenons in the distinctly curved arms. 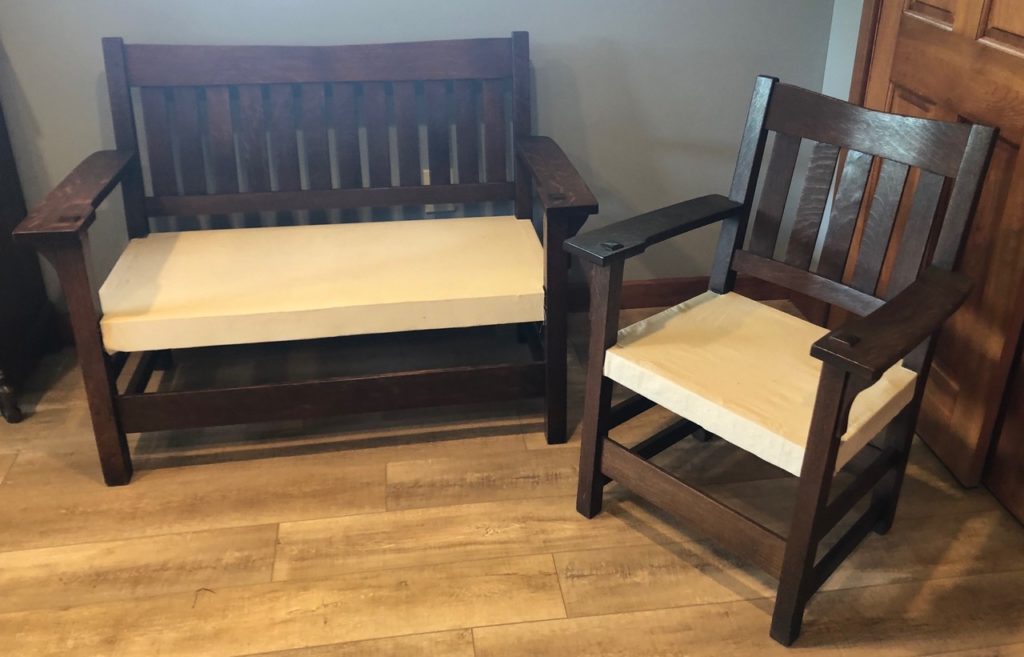 This design must have been a particular favorite of Gustav Stickley’s, as well as his clients. As early as 1901, he selected a V-back armchair to exhibit in his booth in the 1901 Pan-American Exposition in Buffalo, and continued making it for the next fifteen years.

While the design of the framework of the chair underwent very little change over the course of its production, customers did see the seat material evolve. The earliest chairs were offered with either a “roan [horse] skin seat” or one “woven in colored raffia [rolled palm tree leaves].”

By 1905, the selection of seat material had been expanded to include “Craftsman Canvas, Sheepskin, or Soft Leather.” They were secured with rows of round tacks, described as “ornamental nails of dull brass.” That same year the settle, arm chair, and rocker were also offered in mahogany, but at a 25% premium over the “Fumed Oak” version. 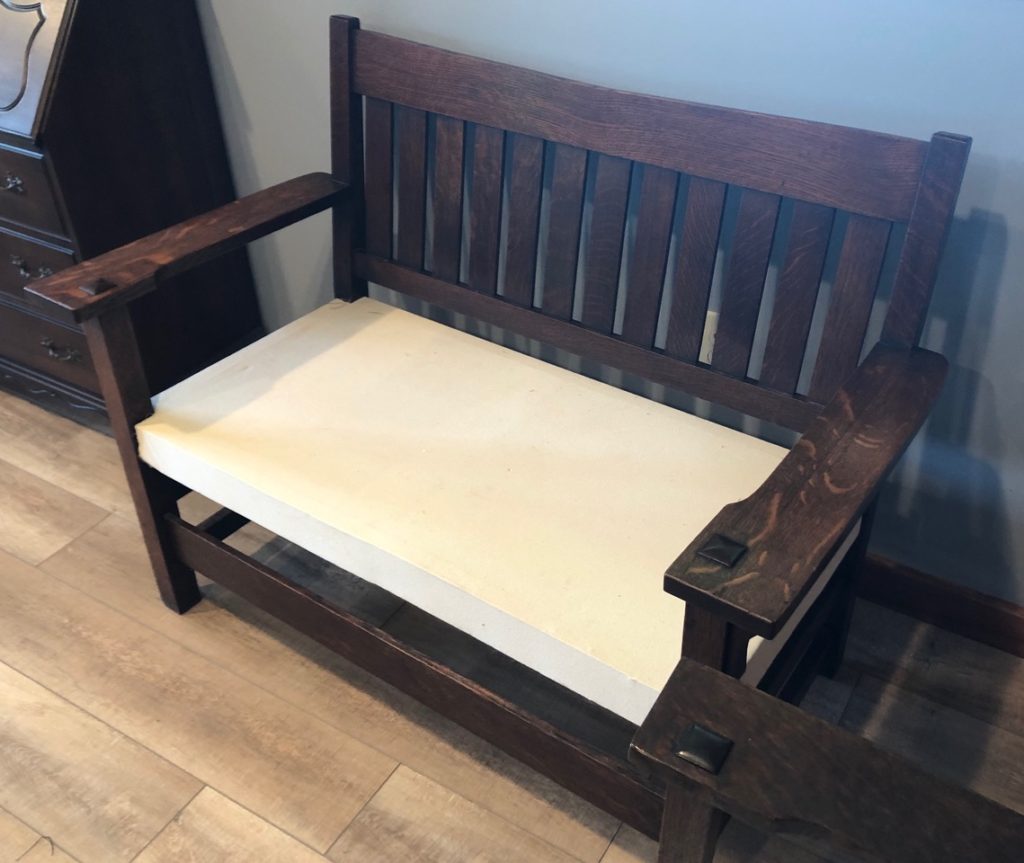 By the time the 1912 catalog came out, when the chair was ordered with a “hard leather seat,” the rows of round tacks had been replaced by a smaller number of square pyramid tacks grouped around the four legs. For slightly less money, it could also be purchased with a “rush [woven cattail leaves] seat.” In addition, for those customers who had fallen in love with the V-back design, Stickley’s factory then produced armless V-back dining chairs, as well as a taller billiard chair.

As a result of their initial popularity and extended production, the Craftsman Workshops’ V-back designs are not considered rare, but today they remain just as popular with collectors who appreciate their timeless design elements.

07/29/20: This article has been updated to correct a detail concerning the makeup of a rush seat. 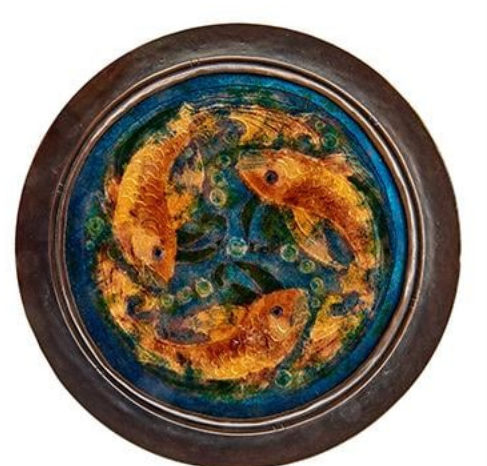 Metal and Enamel Works A Highlight of Summer Auction at Treadway