The Vase That Survived, The Beauty of Bisque, & Blue Glazes: The Auction Beat 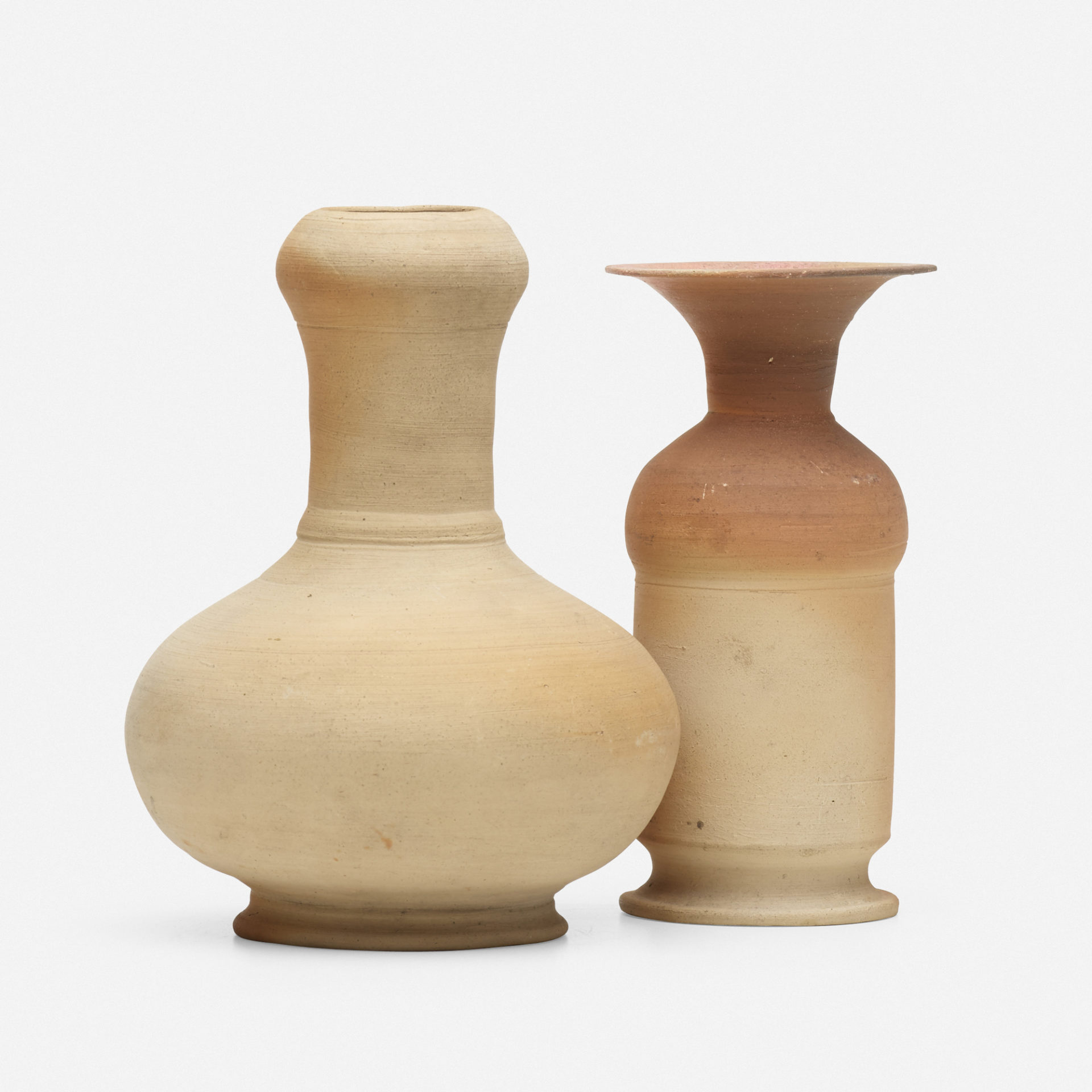 The Vase That Survived, The Beauty of Bisque, & Blue Glazes: The Auction Beat

Online, phone and absentee bidding only

A Newcomb vase that survived a fire, a rare Frederick Rhead tile, and a set of eight GPI chairs: a large selection of Arts and Crafts works up for bid is coming May 1st and collectors all over the country can bid online, over the phone and via absentee bid with Treadway Gallery. The quarterly Decorative Arts auction on May 1st in Cincinnati includes ceramics, metalwork, furniture, lighting, fine art and art glass in multiple eras of design. 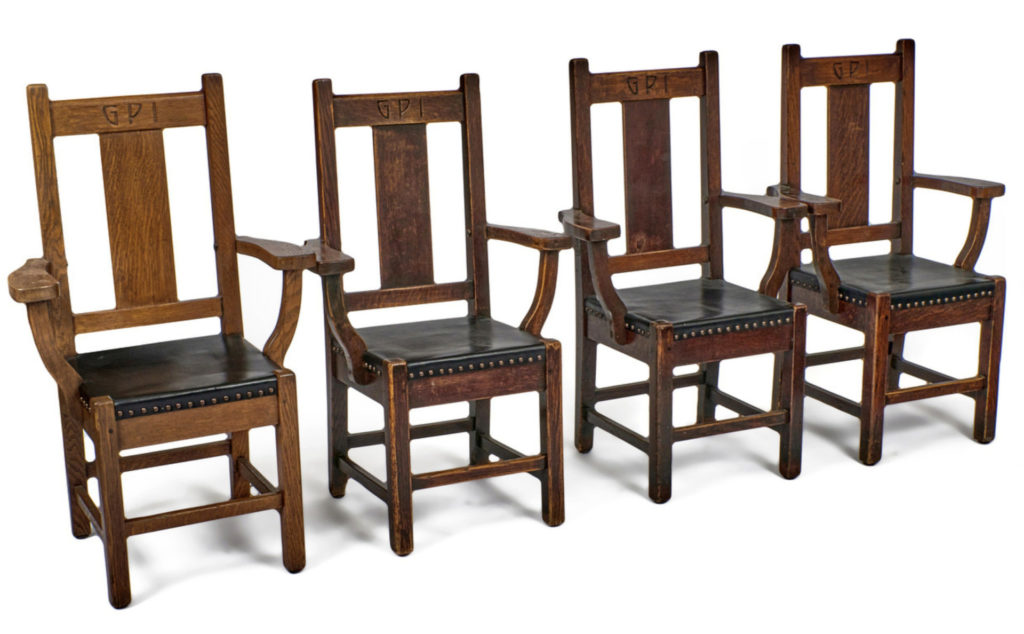 Four of the eight Roycroft chairs made for the Grove Park Inn, known to collectors as “GPI Chairs.” The eight chairs are offered as a set. Photo courtesy of Treadway Gallery.

Ceramics up for bid include two items from Newcomb College: a painted and high-glaze creamer ($4,500 to $5,500) as well as a large (14 inches high) matte glaze vase at $9,000 to $12,000 with a story. While the present owner took ownership of the large vase in the 1990’s from her mother-in-law from New Orleans and this large and impressive vase survived the 2018 Camp Fire in Paradise, CA. One particular Pewabic vase with an iridescent glaze is estimated to sell in the $3,500 to $4,500, range while a detailed and rare tile out of Santa Barbara, CA by Frederick Rhead is expected to bring upwards of $5,500. The tile is inscribed on the back: “Mission Ridge and the Sea from Foot Hills in Mission Canyon.” Also includes in Treadway’s range of ceramics — early Grueby, Van Briggle, Rookwood, Rozane, North Dakota School of Mines, a collection of Niloak, Weller pottery, Fulper, Saturday Evening Girls, and Marblehead.

For furniture offerings, a classic Gustav Stickley chalet desk ($1,500 to $2,500) will be offered next to a number of Roycroft works, including a meditation chair for $1200 to $1700, two very nice armchairs, a dining table, and a very rare set of Grove Park Inn dining chairs. Originally made in 1919, the chairs are offered in their original finish with minor variation. One chair out of the eight has the Roycroft orb and cross on the front. The eight-chair set will start at $4,000 and has a $5,000 to $7,000 estimate.

Fine art includes woodcuts by Arthur Wesley Dow and Helen Hyde, colored etchings and paintings by E.T. Hurley, and paintings by Carl Rawson, Frederick Grant and Colette Heldner. A number of works by Mary Louise McLaughlin will also be offered.

The auction begins at 11AM EST Sunday May 1st. All lots are available for preview. Please call 513-321-6742 or email ellie@treadwaygallery.com to arrange a time for private viewing. The sale will be closed to the public but there will be bidding via phone, absentee, and the internet via Live Auctioneers and Invaluable. As usual, everything is guaranteed and shipping is available worldwide.

View our picks below. What auction lots will you be looking at? Let us know on Facebook!

All descriptions and images courtesy of Treadway Gallery. 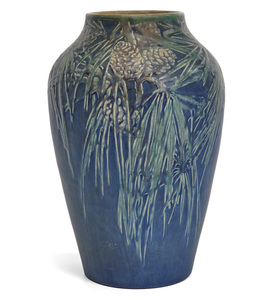 Provenance: A California collection. The present owner from California acquired the vase in the early 1990’s from her mother in law, Ouida Barnes Rice from New Orleans. This vase survived the 2018 Camp Fire in Paradise, Ca. 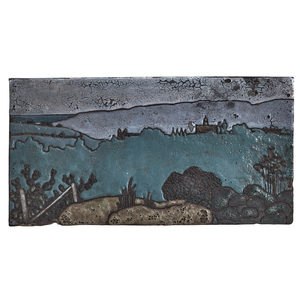 Inscribed on back, Mission Ridge and the Sea from Foot Hills in Mission Canyon. Excellent condition, very rare and beautifully detailed. 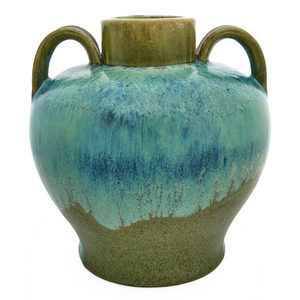 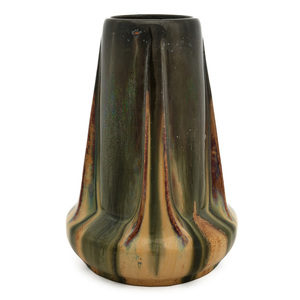 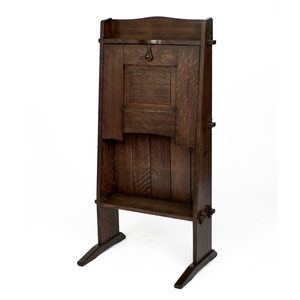 On April 12th, Rago Arts and Auction Center presented their annual Object & Home auction with a large collection of Arts and Crafts style art pottery, artwork, lighting, furniture and more in a variety of styles from both American and European ceramics, fine art and decorative arts.

Among the large and impressive selection of art pottery in Rago’s catalog, the selection of bisque earthenware vases created by George Ohr were particularly noted for the importance of the line to Ohr himself. On the Rago website in the description of each of the bisque earthenware lots, David Rago describes his first meeting of the antiques shop owner who bought 10,000 of Ohr’s vases from his surviving son, Ojo Ohr. Instead of viewing them as unfinished, Ohr intentionally left them unglazed as the purest form of his art. “In other words, not only were his bisque pieces truly “finished” but they also represented his highest, most complete expression. After decades of turning and glazing his vessels, Ohr settled for simplicity of color on pieces that were at times his most complicated and abstract.”

See an image of the bisque earthenware Ohr vases below as well as other highlights of the Object & Home auction: 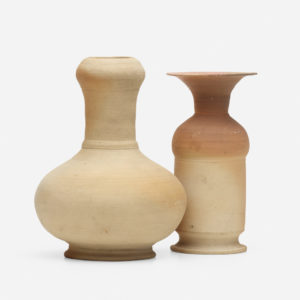 Two bisque earthenware bottle vases made by George Ohr, coming from Ouroboros Art Pottery in Richmond were purchased for $4,000 after a competitive bidding war.

David Rago, through his website, said the following about Ohr’s bisqueware: “Just as Gustav Stickley chose quartersawn oak for his furniture, allowing the expressive grain of the wood to serve as intrinsic decoration, Ohr let the medium of clay speak for his art…These pots exhibited a purity of idea and design, misunderstood for so long, that began to attract serious buyers beginning in about 1990.” 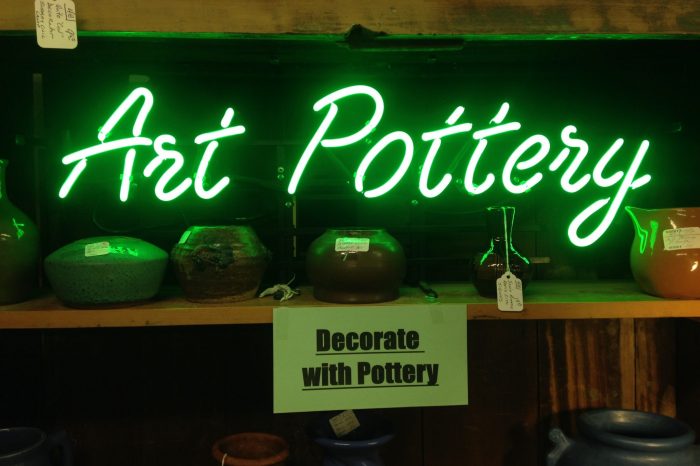