Five minutes after Leigh Ann and I had lifted this little fawn out of Lake Lure and away from the jaws of a hungry muskrat, we knew he couldn’t stay with us for very long (Go to “Archives” below for Part I of this tale.).

After spending two days waiting and searching for his mother, who never appeared, we went to Plan B.

Several friends had suggested turning the two-day-old fawn over to the Nature Center, Asheville’s version of a petting zoo, but we soon discovered the Nature Center does not accept male deer. They know from experience that male deer in captivity eventually become large, aggressive, and dangerous — to the other deer, their handlers, and small innocent children.

As Leigh Ann, a veterinarian with zoo experience, knows too well, when large pets become dangerous pets, veterinarians are asked to put them down.

And she wasn’t going to let that happen.

So, while my friends fretted I was going to turn thus guy into an Arts and Crafts office mascot, Leigh Ann quietly did what she is trained to do: she evaluated him carefully, making sure he had no injuries or signs of any disease that would have caused the doe to desert him. She bottle-fed him around the clock, including feedings at eleven, two, and six in the morning; she weaned him from the bottle into drinking warm goat’s milk from a saucer; and she began interviewing the few people in our area who are government-certified deer rehabbers.

And so on Tuesday morning the fawn and I drove an hour and a half north from Asheville, high into the Blue Ridge Mountains to a lush, forested, private family preserve, where for the past eight years Larry and Angela have rescued and released whitetail deer (and only whitetail deer) back into their natural habitat.

Once we arrived, Keith led us into a quiet room where we found six curious spotted fawns, all under three months of age, waiting for us. This time our little guy did not turn, run, and hide between my legs; instead, he gingerly crept forward, ready to meet his new playmates. The largest, still weighing fewer than twenty pounds, immediately began giving him a bath, as if to say, “Welcome to your new family.”

And he never looked back.

Finally, we had our Disney Moment.

And I knew we had done the right thing.

On the ride back down the mountain, I thought about how June should always be a month of graduations, and we had just experienced another one, complete with a few unavoidable and unashamed tears of joy. 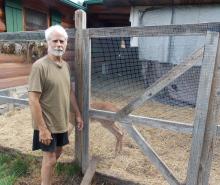 Thanks for all your support!

PS – Keith and Angela Zeiss receive no grants, government funds, or reimbursements. All money for food, medicine, bedding, vet bills, and goat’s milk for the fawns they rescue, raise, and release comes out of their savings. They do not solicit donations, but do accept them, so if you would like to join me in making any contribution, please make the check to Keith or Angela Zeiss and send it to me at 25 Upper Brush Creek Road, Fletcher, NC. (They do not publish their address to avoid visitors, requests for grade school field trips, and other distractions that would hinder the deer being re-introduced to the environment. Pretty selfless, eh?)

Next Monday, Back to Arts and Crafts: “A Date With a Lady in Syracuse”

Top: Fawn on the deck at the lake.

Lower: Keith and one of his yearling does kept in a separate enclosure that opens onto their yard and the woods.