A Hidden Gem – With Its Own Secrets

In 1912, when Frederick Loring Seely was designing the original 150-room Grove Park Inn, he was faced with a dilemma: how to give every guest room a panoramic view of the surrounding Blue Ridge Mountains?

His solution created one of the hidden wonders of this famed Arts and Crafts resort hotel overlooking Asheville, N.C.

Starting on the third floor directly above the spacious two-story ground floor lobby, Seely created a hollow rectangle with rooms lining the four outside walls and a hollow center stretching from the third floor up to and through the sixth floor skylights. He named it the Palm Court, after the palm trees growing in massive oak-and-iron Arts and Crafts planters and stretching toward the rooftop skylights.

The door to each of the guest rooms opened onto a parapet hallway ringing the Palm Court. To decorate the parapet walls on the fourth, fifth, and sixth floors, Seely commissioned an unidentified artist to stencil an Arts and Crafts design onto the dried plaster. Unfortunately, years later — when Arts and Crafts had fallen out of favor — painters were hired to cover up the original wall stencils.

A few years after we first began holding the National Arts and Crafts Conference at the Grove Park Inn in 1988, the owner and general managers began restoring and recreating the Arts and Crafts heritage of the famed hotel. One of their projects involved hiring Mark Ellis-Bennett, a restoration consultant and craftsman, to meticulously scrape away nearly thirteen layers of paint until he reached one of the original stencils.

Mark then created a template from one of the original patterns he had uncovered, which he used to duplicate the Arts and Crafts stencil on all of the parapet walls. The project required several weeks and several sections of scaffolding, but when he was finished the Palm Court walls looked much as they had in 1913.

Several more years have since passed, and the Palm Court remains one of the hidden gems deep inside the Grove Park Inn. But the Palm Court remains open to the public and to guests staying in any section of the 510-room hotel, so I encourage anyone who has the opportunity, either at next month’s Arts and Crafts Conference or any time of the year, to ride one of the elevators hidden inside the massive two-story fireplaces up to the Palm Court. You can then wander about looking at the Inn’s collection of historic photographs on display, relaxing in the leather and wicker chairs and settees, and basking in the sunlight beaming down through the sixth-floor skylight.

And if you’re lucky, perhaps the notorious Pink Lady, the Grove Park Inn’s resident ghost who most often appears in the Palm Court, will reveal herself to you.

As well as the still undiscovered secret as to how she came to be at the Grove Park Inn. 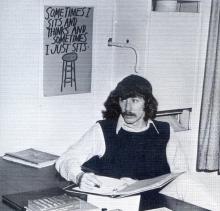 “The only thing to do with good advice is to pass it on. It is never of any use to oneself.” – Oscar Wilde

Top: The Palm Court a few years after the 1913 opening.

Note: Stencil artist Amy Miller will be teaching a three-hour hands-on workshop on how to stencil on both Thursday afternoon and Friday morning as part of the February 18-21 National Arts and Crafts Conference. For details, visit www.Arts-CraftsConference.com and click on “Workshops” on the left column. Stencils are a great way to add color to any Arts and Crafts room!