I have often said that when given ten minutes, I’ll start a twenty-minute project.

And when given two hours before I have to be at the airport, I’ll find a place to explore.

Last week I emerged from my early morning appointment in Kansas City and headed directly to the home and studio of artist Thomas Hart Benton. Known for his colorful scenes of Midwestern rural life, I had often heard of Benton but it was not until I began collecting the black and white lithographic prints of Grant Wood did I become more intrigued with his friend and fellow artist.

In 1935 Benton and his wife Rita, who served as his business manager and protector, bought a large Arts and Crafts limestone house in a central Kansas City neighborhood. According to my tour guide, the two-story house had cost $35,000 to build in 1903, but during the depression the Benton’s were able to buy it for $6000.

They lived there until Thomas Benton’s death in 1975, at which time Rita announced her intent to turn the house over to the state of Missouri as an historic site. Nearly everything – from Rita’s kitchen dishes to their living room furniture – remain in place today, looking like the Benton’s had just gone out for a neighborhood stroll.

In the small rear yard stands the original two-story stable, half of which Benton had converted into his studio in 1935, so it was there that I spent most of my time that morning. I was pleased to see that the administrators had remained true to Rita’s wishes, leaving Benton’s familiar pipe in the ashtray next to his easel, his sketches tacked to the rough walls, and dusty clay models of past projects pushed to the back of a workbench – even an old stepladder left standing in the corner. No attempt had been made to straighten up the large, sunlit room, giving visitors a rare opportunity to get a glimpse into the daily life of a major artist.

And Rita Benton was not the only person to recognize the importance of her husband’s studio. When poet Carl Sandburg passed away in 1967, his wife Lilian turned their North Carolina home and farm over to the National Park Service. Today you can climb the worn stairs to the small spare bedroom that served as his office, and like Benton’s studio, it too looks just like it did on the final day that Sandburg sat hunched over his manual typewriter, right down to the Life magazines strewn on the pine floor.

I’ll post a few more pictures over on our Facebook page, and hope that you’ll share your own favorite artist studio with us so that we won’t miss the opportunity to visit it on our travels.

One final note: Benton’s 1903 home was perfect for entertaining, which the Benton’s loved to do. Rita was famous for her homemade spaghetti sauce, the recipe for which she typed out and gave away to friends. Today you can pick up a copy of her recipe from her kitchen counter, which, of course, I did, and will let you know over on our Facebook page how it turns out when I make it for Leigh Ann this weekend. 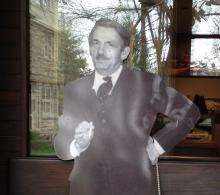 From Thomas Benton to Carl Sandburg