A One Hundred Year Journey

A One Hundred Year Journey

This particular hammered copper up-lighter arrived by train in Asheville in late spring, where under Toothaker’s supervision it was suspended from the ceiling in one of the original 150 guest rooms. It remained there until 1955, when the inn underwent a major remodeling program financed by the new owner, Charles Sammons. It, along with several other Roycroft ceiling fixtures, was removed. The domed ceiling plate and three supporting chains were tossed aside, and the heavy, 17-inch diameter copper bowl was transformed into a floor ashtray. Three holes were drilled in the bowl, one for each of the six-inch wooden legs bolted through the bottom. Then it was placed in the Great Hall and filled with sand — along with cigarette butts and, I suspect, more than a few stale beers.

We don’t know how long the Roycroft “ashtrays” remained in the Great Hall before they were eventually thrown out, generally after the bolts broke through the copper bottom after being dragged along the tile and flagstone floor by the staff. Three years ago I discovered this lone up-lighter tossed in a dark corner of a damp storage room in the basement as I was working on an inventory of the Grove Park Inn’s collection of antiques. By then the copper had been polished, the iron bands had rusted, and the bowl had several jagged holes looking like it had been used for target practice. When I asked the manager with me that day what would become of it, he replied, “Take it, or toss it.”

Naturally, I took it back to my workshop where it sat on a shelf for yet another year, until I decided to have it repaired. I knew that either certified Roycroft Master Artisans Ron VanOstrand or Frank Glapa could undertake the challenge, so after a coin toss I sent it on its way to Chicago with Frank. It remained for a year in Frank’s workshop, where he meticulously hammered out the jagged edges and filled the gaping holes with additional copper.

The Roycroft up-lighter made the return trip to Asheville for last year’s Arts and Crafts Conference, where Frank handed it back to me, repaired but still in needed of restoration. I took it home, carefully packed it up, and shipped it to Chris Banich, a patination expert restorer in Alpharetta, Georgia. A few weeks later Chris sent it back, and I challenged anyone who stopped by to be able to tell me what had been done to it.

It was an amazing hundred year journey: East Aurora to Asheville to Chicago to Alpharetta and back to Asheville, and an equally as amazing transformation and restoration: from ceiling light to floor ashtray and now back to being a ceiling light again.

Proof that rarely is any true antique beyond saving. 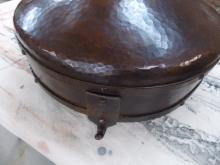 A Walk on the Mild Side