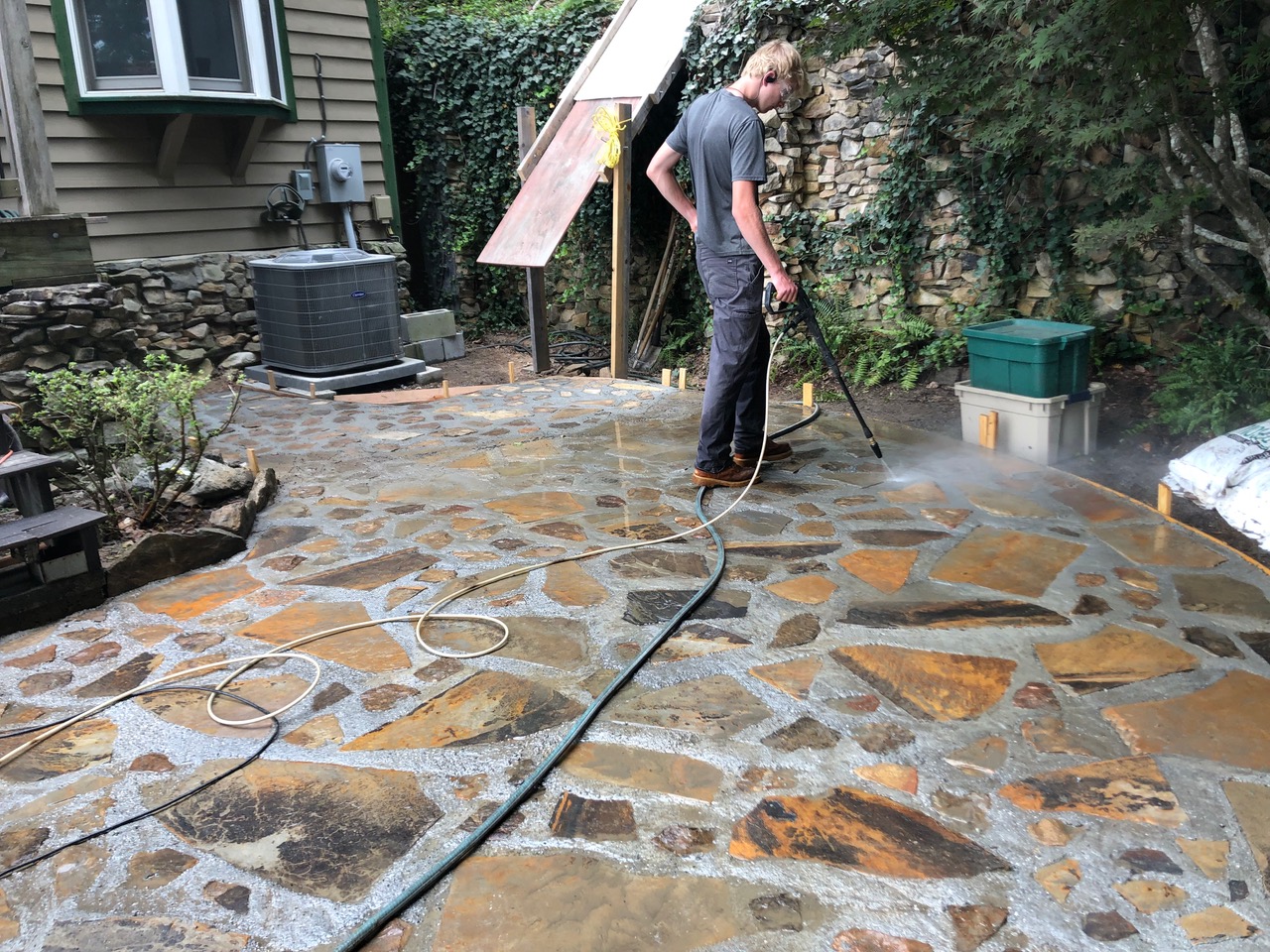 Two weeks ago, I wrote about my latest project: building a flagstone and concrete patio in the small backyard of our house at Lake Lure. Twenty-five years ago, I first planted grass there, but it did not do well, so I replaced it with a wooden deck. It eventually warped, cracked, and rotted, so this year I decided to make a third attempt with something more durable. 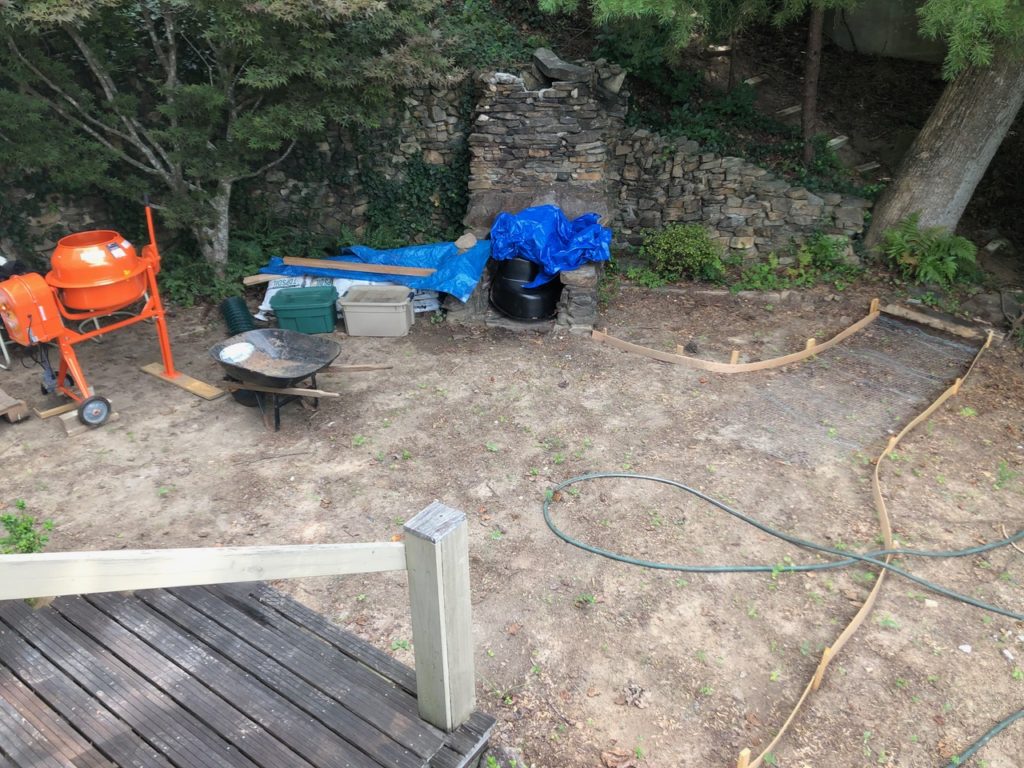 After a crew I hired had cut up and hauled out the old deck, I laid out the shape of the flagstone patio with flexible plywood forms. I then had two options for getting concrete down into the thirty-foot hole where our backyard sits. I could have a concrete truck pump the wet concrete down from the road, but it would have been impossible for me to place the rocks in all of the concrete before it hardened. 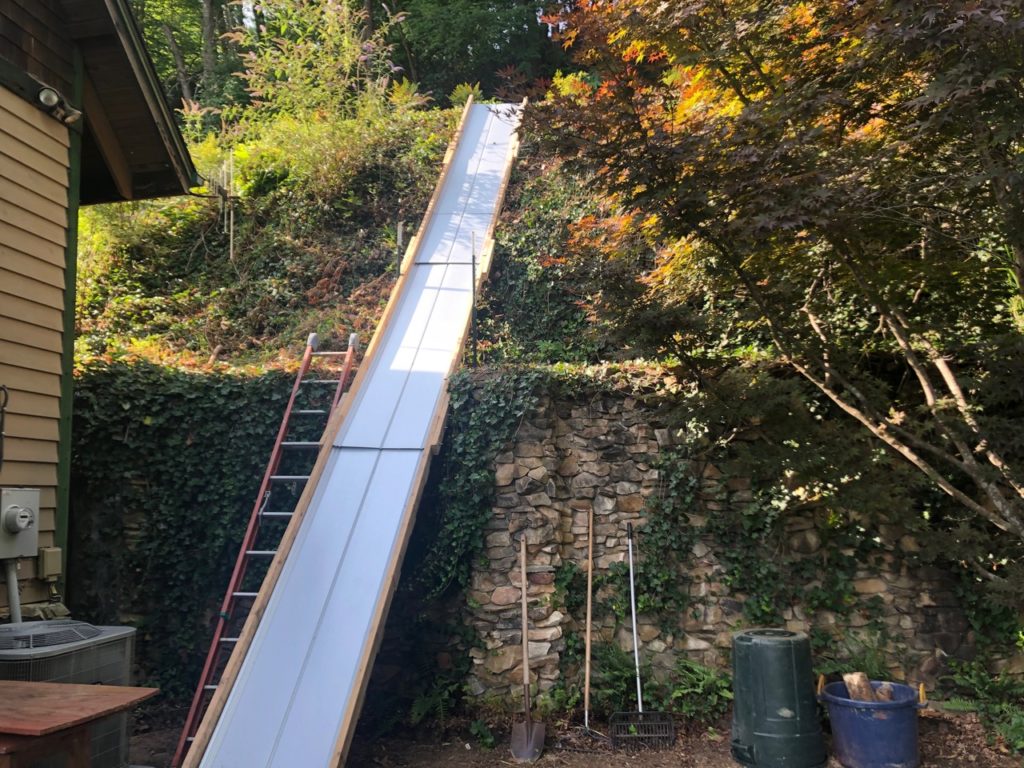 My second option was to construct a wooden ramp, using sheets of steel roofing to slide all of my tools, rocks, and bags of dry concrete from the road down to the backyard. While slower than having the wet concrete pumped down, I chose this option, as it gave me more time and control over the finished product.

Back in my workshop, I first built the framework in four separate sections, then bolted them together on the steep slope before attaching the sheets of thin, slick steel. 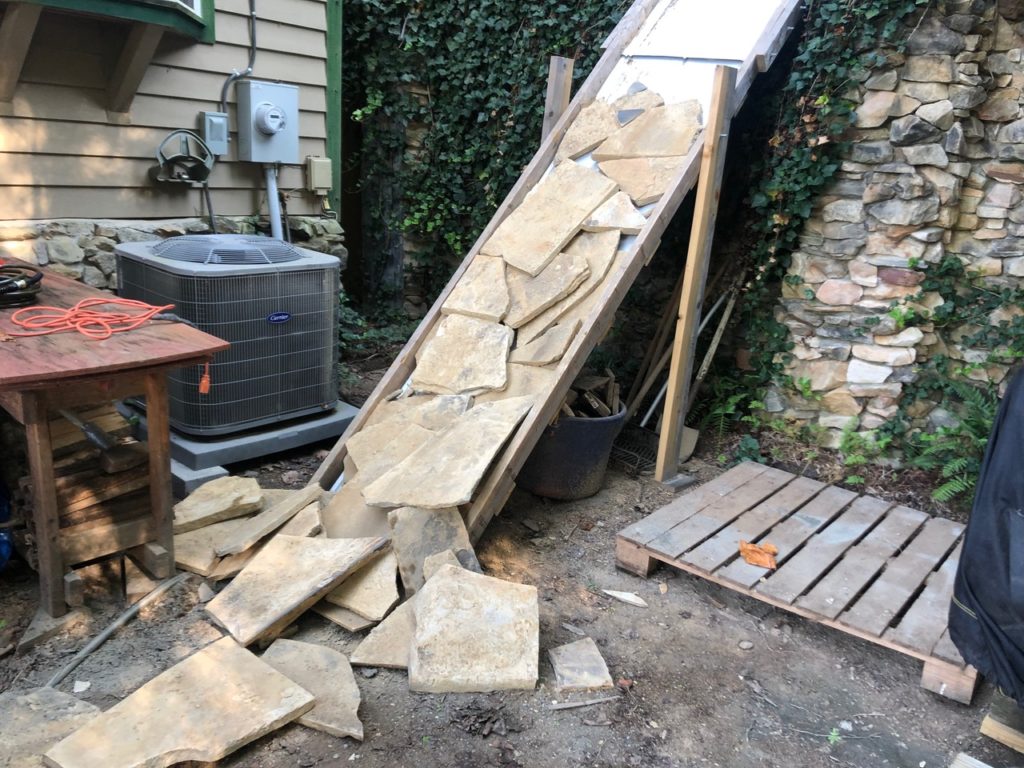 The rocks came down fast and hard, but it did not matter if a few broke. After the first three bags of dry concrete exploded on impact, however, Jonathon and I had to use a rope attached to a wooden sled I built to slowly lower each bag down the slide.

In all, the project required 145 sixty-pound bags of concrete. In case you’re doing the math, that’s 8,700 pounds lifted and carried three separate times: from the truck to the top of the slide, from the bottom of the slide to the pallet, and from the pallet into the mixer, for a total of 26,100 pounds or 13 tons of dry concrete we lifted.

Each afternoon we went home tired, and each morning we woke up sore. 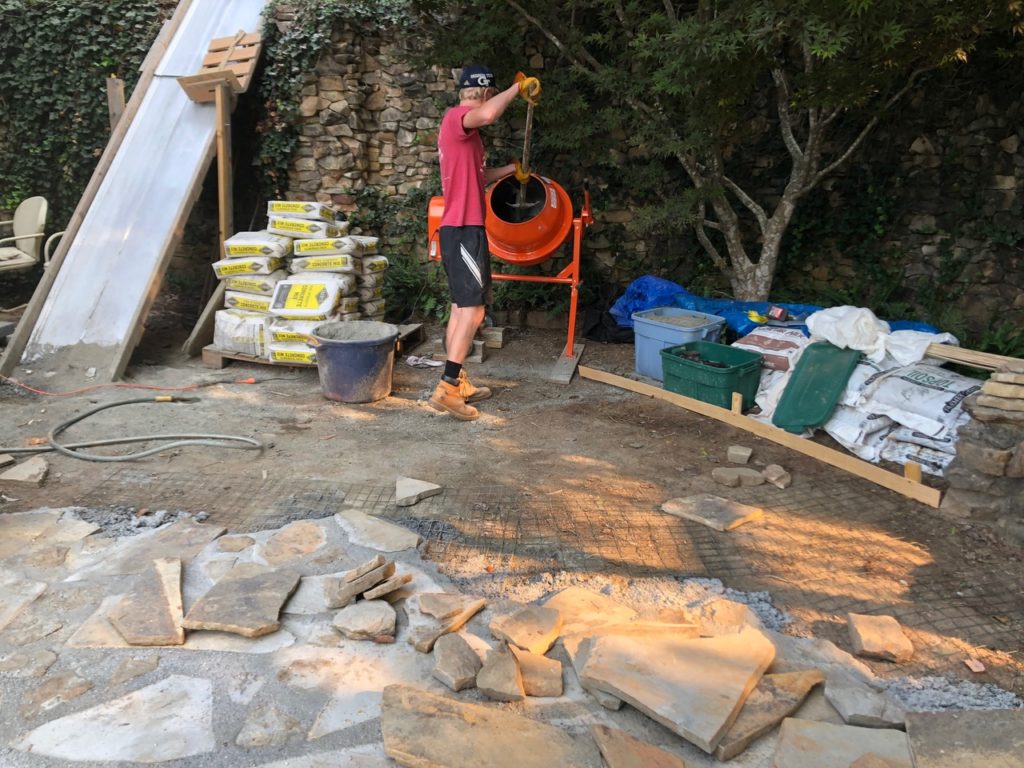 Once we finally got our rocks and concrete down into the hole, Jonathon and I worked out a system. He would combine the water and dry concrete in the mixer, before using a wheelbarrow to pour it where I had rolled out a wire mesh, which reinforces the wet concrete and prevents later cracking. I would then use a trowel to smooth out the concrete before tapping each rock into place, level with the wet concrete. 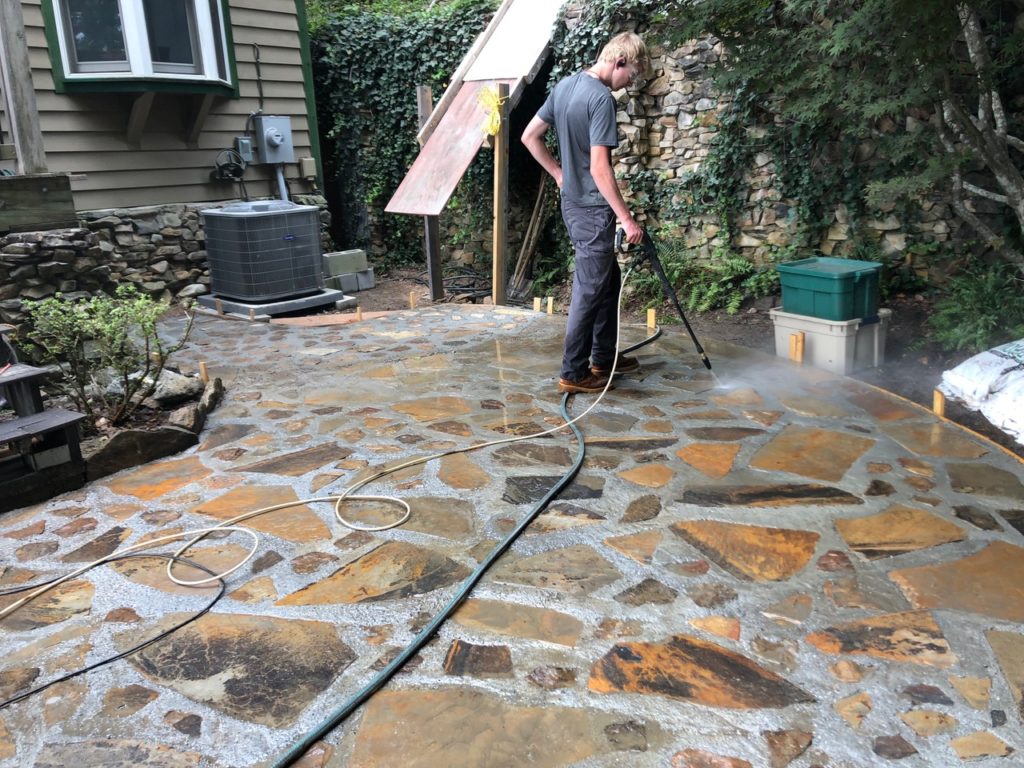 It was impossible to smooth out the concrete without getting a thin skim coat over the tops of the rocks, so once the concrete had dried, we used our power washer to clean the surface. As you can also see in the background, before we could finish the final section, we had to dismantle part of our slide to be able to pour the concrete and lay our rocks beneath it. 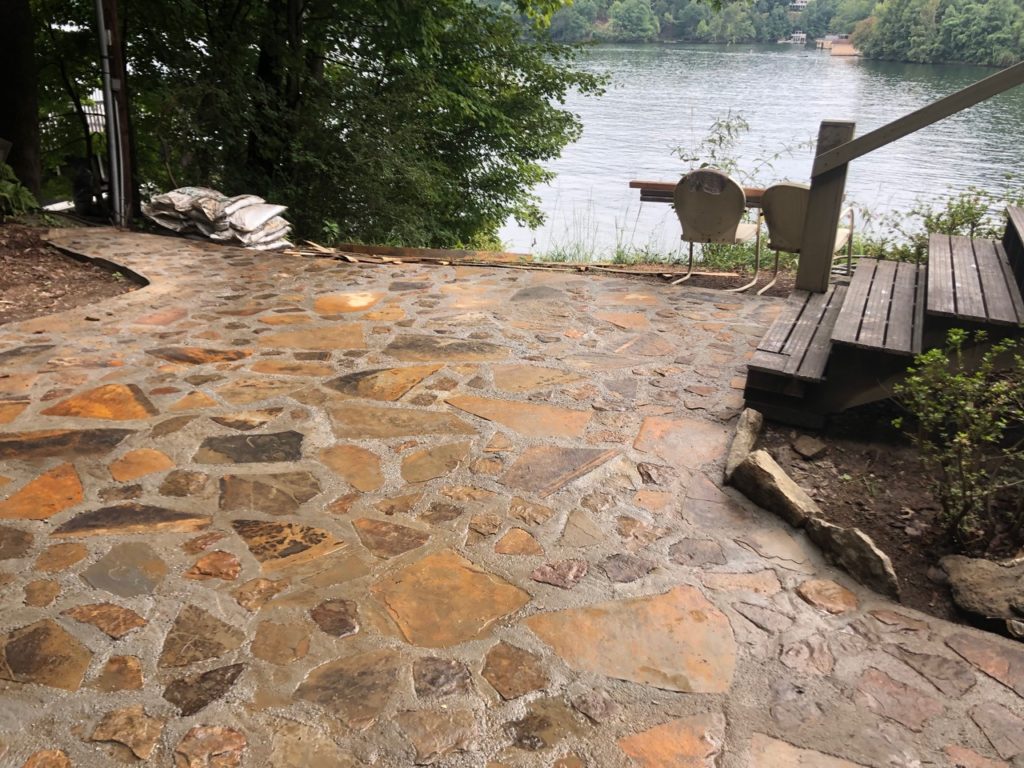 We still have a little more clean-up to do before we can start opening the bags of topsoil and mulch, but the patio is pretty much done. All told, it had taken two days to get our slide and forms built, as well as unloading our tools, wire, rocks, and concrete. It took another three days to pour the concrete and set the rocks in place, then one final day of power washing and clean-up. 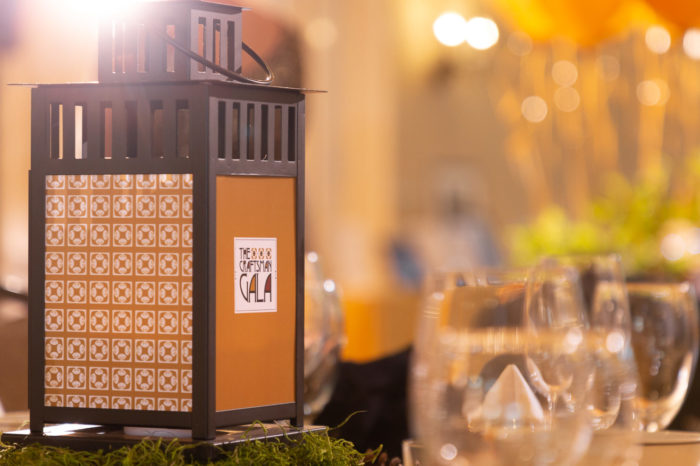