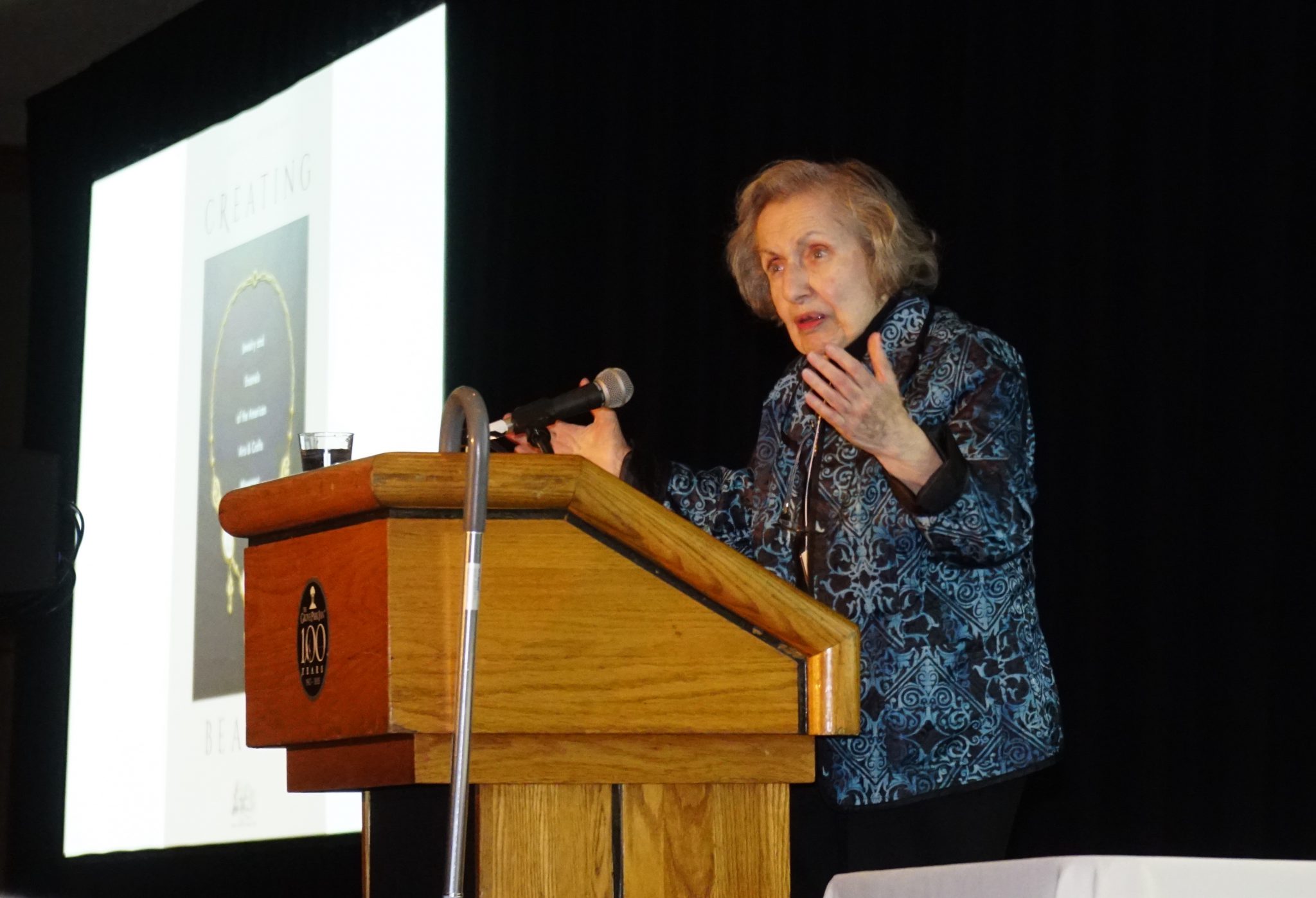 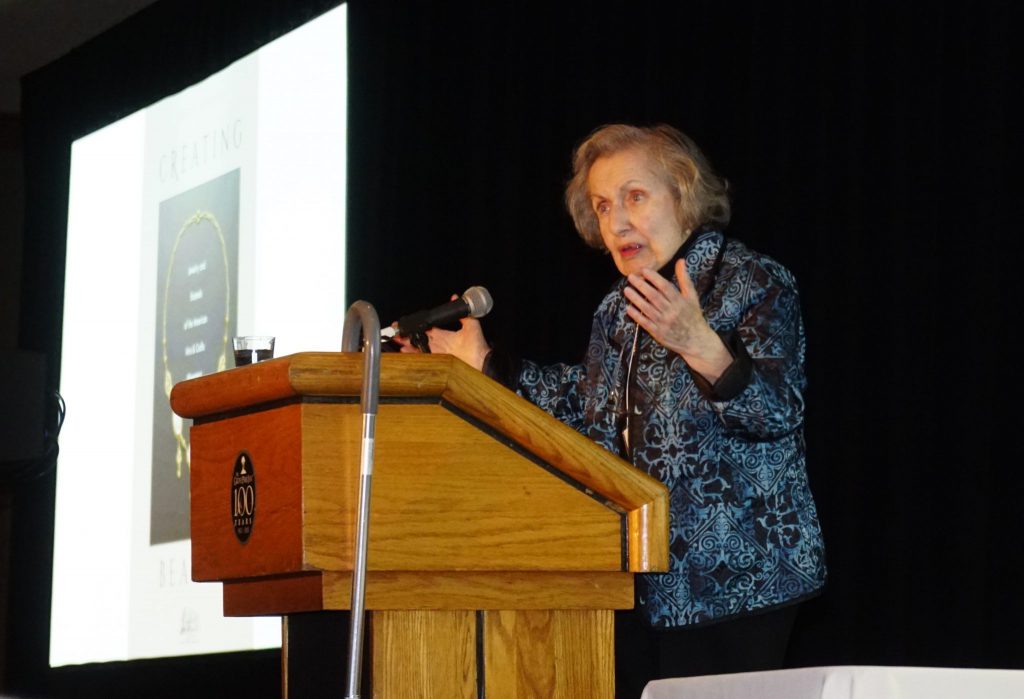 Rosalie Berberian gives her seminar “If Jewels Could Talk: Stories to Share with Friends” during the 2019 National Arts and Crafts Conference at the Grove Park Inn.

Those would be the words used to describe Rosalie Berberian, our dear Arts and Crafts friend, scholar, author, and supporter of the annual National Arts and Crafts Conference, where she took the stage last February at age 91, and left fifty minutes later to an extended standing ovation.

Rosalie poured her decades of study and her failing energy into the preparation of her landmark book, “Creating Beauty: Jewelry and Enamels of the American Arts & Crafts Movement,” which had its premiere release at the 2019 National Arts and Crafts Conference at the Grove Park Inn. 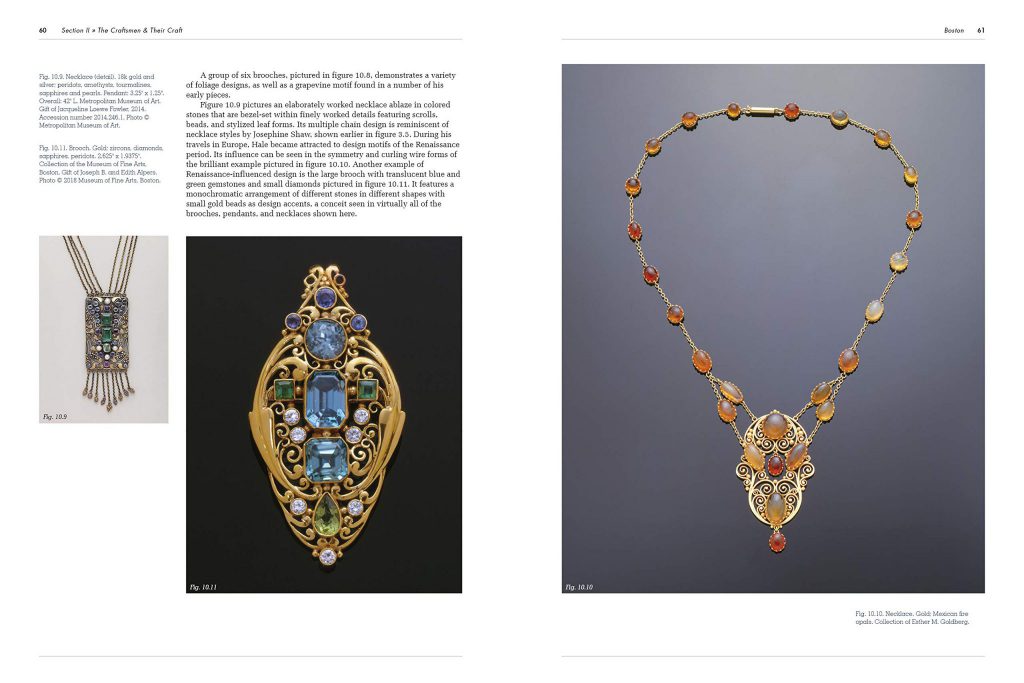 Rosalie returned to her Connecticut home glowing in her latest achievement, but exhausted from both the trip and the years of research, photography, and writing she had devoted to her final book. While today her mind remains sharp, her body has been unable to keep up with her; Rosalie is now nearly bedridden and devoid of energy. While she will be unable to again make the trip to see her beloved Arts and Crafts friends at the Grove Park Inn, her thoughts will be with us all. 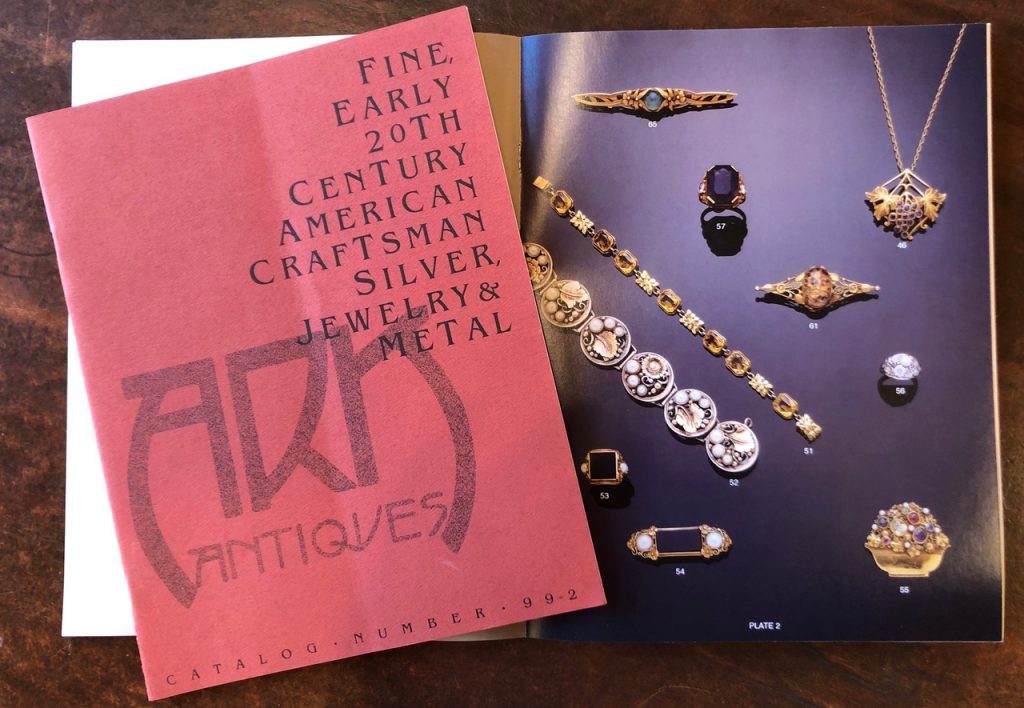 While most of us know Rosalie as the founder of ARK Antiques and a pioneer in the recognition of the importance of little-known Arts and Crafts jewelers and metalsmiths, in truth her groundbreaking research into Arts and Crafts metalsmiths was her third and final career. In the 1970s she served as a Doctor of Epidemiology at the Yale University School of Medicine. Working also in their Department of Psychology, Rosalie studied the origins of drug use in adolescents and published numerous scholarly articles and studies, as well as developing some of the earliest drug education programs for high school students. 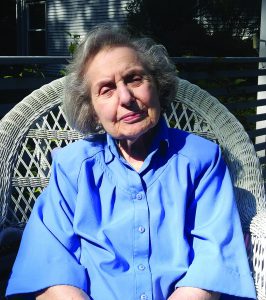 A photo of Rosalie Berberian, taken in 2019. Photo: Aram Berberian.

But as other collectors began following her lead, Rosalie carved a new path for herself by researching and collecting Arts and Crafts silver and jewelry, the final unexplored frontier in the revival of the Arts and Crafts movement. She and her son Aram formed ARK Antiques, and generously shared their research, photographs, and information with other collectors through their quarterly catalogues, now collector items themselves. My own interest in the sterling silver bowls created by Asheville silversmith William Waldo Dodge was fueled and reinforced by Rosalie’s announcement that Dodge was an important silversmith worthy of a budding collector’s attention.

We recognized Rosalie’s many accomplishments and her contributions to the education of thousands of Arts and Crafts collectors by bestowing upon her the Arts and Crafts Lifetime Achievement Award in 2008. But Rosalie was far from finished at that point in her career, as she was determined to leave as a final chapter in her glowing legacy a landmark book on Arts and Crafts jewelry. Last year she made her final journey to the Grove Park Inn and stood upon the stage to do what she was always best at doing: teaching.

If Rosalie touched your life, as she did mine, even if you never had the pleasure of meeting her in person, please take a moment right now to send her a note of appreciation. It will mean a great deal to her, as it would to any of us, for her to know that her work lives on and that she will never be forgotten.

“I wondered about them constantly and asked them all sorts of questions. Never mind that they were all dead. They were there in my mind’s eye, and I asked them silently, as I studied their work, ‘Did it come out the way you intended?’ ” – Rosalie Berberian 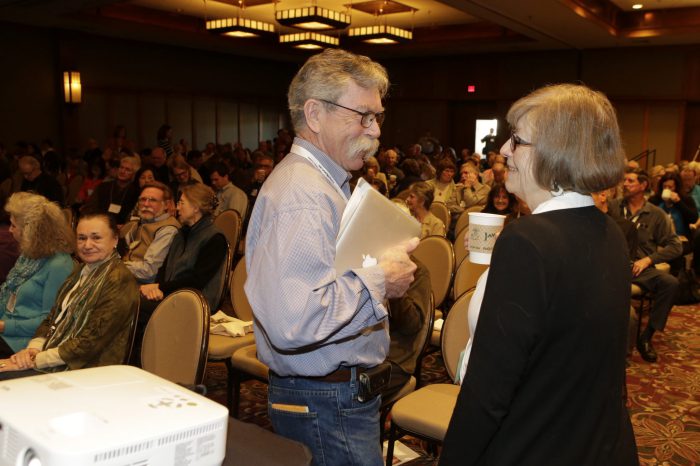