A View from the Top of a Mountain

A View from the Top of a Mountain

If you caught my column two weeks ago, you know that we recently took a traditional family vacation to Yellowstone National Park, and stayed two nights at the Old Faithful Inn, originally furnished in 1904 by the Charles Limbert Company.

What I did not mention was an art auction taking place that same week, an auction that included two signed lithographs by my favorite Midwestern artist, Iowa native Grant Wood.

Grant Wood is best known for his oil paintings, most notably American Gothic (1930), but during the Great Depression he and several other artists created limited edition lithographs which were sold through the Associated American Artists gallery. This New York gallery was started by Reeves Lewenthal in 1934 with the intent to make artwork by major artists, such as Grant Wood and Thomas Hart Benton, affordable to the middle class. Lewenthal paid the artists $200 per image, from which he generally created 250 prints before destroying the original. Each print was signed by the artist and sold for $5 each, plus $2 for an optional frame.

From 1937-1941, Grant Wood created 19 black and white lithographs for Associated American Artists, many of which captured the essence of the rolling hills of Iowa and Illinois where I grew up, as well as the farmers who worked the land. My family had copies of Grant Wood’s paintings and lithographs in their homes, but, ironically, it was not until I moved to North Carolina that I found myself drawn back to them, and began collecting some of his signed original prints.

I knew before leaving home that the sale would coincide with our trip to Yellowstone, but I assumed we would have cell phone service, so left my contact number and instructions for the staff to call me when the two Grant Wood lithographs came up for sale.

Well, on the day of the sale I found myself at the northern-most tip of Yellowstone, where, as it turns out, there was no cell phone service in the Mammoth Lodge. We had plenty of elk and bison to see, lots of great food to eat, plus geysers and bubbling pools of boiling mud, but no internet or cell phone connection. Someone in the hotel suggested that I might catch a passing satellite on top of the mountain behind the hotel, so on Thursday morning, two hours before my lots were up, I grabbed a water bottle and my phone and started hiking. Along the way I literally passed by a mother elk and her fawn, but they had no cell phone service either.

Just an hour before the sale I struck pay-dirt; actually, it was more like a cell phone connection. Suddenly there I was, on top of a mountain in Yellowstone watching an auction take place live in New York City and preparing to place my bid from more than 2000 miles and 8000 feet in elevation away.

As the auctioneer prepared to sell lots #257 and #258, I began to get those predictable auction jitters, wondering where the bidding would start, how high it would go, whether or not I would be able to snag either one for a price I felt comfortable with, reminding myself that the auction house would be tacking another 25% as a buyer’s premium onto the top bid.

But still, I marveled at the technology that enabled me to bid via my phone, technology that didn’t exist even a few years ago, technology that eliminated the need to attend an auction in person, that overshadowed faxed absentee bids, or sending a representative to bid in our absence. It was hard to believe, just too good to be true….

Then my phone went dead.

And there I stood, unable to do anything but laugh at how ridiculous I must have appeared to anyone in the valley far below, anyone watching this madman walking tight circles for more than an hour, looking to the sky with his hand stuck to the side of his head.

And so I did what I came to do: I sat down and watched the elk grazing on the lawn. 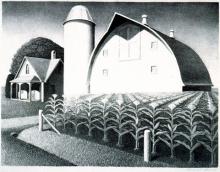 Top: Leigh Ann, her brother Clark, and their parents Lynn and Richard Hamon enjoying their time at our 1940s cabin near Mammoth Lodge.

Bottom: “Fertility” – one of my favorite Grant Wood lithographs.

All in the Name of Research