A Walk in the Woods

A Walk in the Woods

It was a sunny but cold, windy afternoon last week when we wrapped up filming a segment for “This Old House” in Concord, Massachusetts. I stood outside the studio and knew I had a tough decision: make a sprint for the airport and go on standby for a possible seat on a plane headed back to North Carolina that night, or visit the home of an old friend.

It had been the summer of 1972 when I was last at Walden Pond, at a time when I was still two months away from being a rookie high school English teacher. I was on a summer’s quest in my new Opal hatchback to explore the haunts of a band of American writers: Hawthorne, Alcott, Emerson, Longfellow, Dickinson, Frost, and, of course, Henry David Thoreau.

I recall being somewhat appalled by the fact that in 1972 Walden Pond was more of a high school hangout, a place to drink beer and let your dogs go swimming, than it was a hallowed shrine to one of America’s most influential authors. Nevertheless, I made the half-mile trek back into the woods to the marker noting the place where in 1845 the 28-year-old Henry David Thoreau had build a small cabin for his two-year retreat back to Nature. 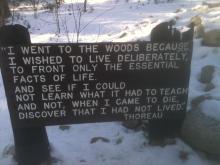 Thoreau’s cabin defines the word “modest.” Just 10′ x 15′, it contained a cot, a stove, a desk, a chair, and a small table. And while Thoreau’s affinity for Nature has landed him among those writers who laid the groundwork for the Arts and Crafts movement, his attitude toward furniture was enough to make a Stickley collector wince. “Thank God, I can sit and I can stand without the air of a furniture warehouse,” he wrote. “The more you have of such things, the poorer you are.”

No one was drinking beer at Walden Pond last week, for the pond was frozen so solid that my only companions were three ice fishermen, who looked at me like I was the crazy one. When I first stepped out of my rental car, however, I thought the years had played a trick on me, for there was a replica of Thoreau’s cabin sitting conveniently next to the parking lot (top photo).

I guess the person who decided to move the replica out of the woods and place it between a busy highway and the parking lot didn’t think people still needed to connect with Nature. Why take a walk along the same shoreline or through the same woods that Thoreau traversed when you can snap your pictures without even leaving the comfort of your car?

Soon after Thoreau left Walden Woods in 1847, his cabin was dismantled for the wood. His autobiographical book, Walden Pond, was not published until 1854. By the time literary historians decided the site of Thoreau’s former cabin was worthy of a commemorative plaque, no one who had actually seen it was still alive.

In 1945, however, a young man by the name of Roland Wells Robbins stepped forward, volunteering to spend three months digging holes in Walden Woods until he finally uncovered the 100-year-old foundation for the chimney in Thoreau’s cabin.

Now that’s my kind of guy.

When I left Walden Pond in 1972, I was resolved to someday build my own replica of it.

Forty-two years later, the urge is still there.

And this time I have a spot for it.