A Woman of Letters

A Woman of Letters

She was the last of the great letter writers.

Violet Hickok, better known to us simply as Grandma Hickok, lived her entire life on the Illinois prairie, where she and my grandfather (pictured) started farming during the Great Depression, only to have their very first corn crop completely wiped out by a violent hail storm.

But she and my grandfather, Myron Hickok, demonstrated that trademark Midwestern determination, survived their first winter together, and 60 more. They each played their own role in their partnership. Grandpa took care of the farm, which eventually grew to include more than 600 acres of deep Midwestern topsoil, and grandma took care of the finances. I never saw her drive a tractor, ride a horse, herd cattle, or even tend a garden. She remained indoors most of the time, devoting her talents to what she loved most: reading non-fiction and history books, tracking their income and expenses, keeping a daily journal, collecting commemorative stamps, and writing cards and letters.

My grandfather once confided, “Your grandmother and I have a simple arrangement. She takes care of the little problems, and I take care of the big ones. So far,” he smiled, “I haven’t had any to take care of.”

My grandmother also watched over the reading habits of her ten grandchildren, carefully selecting and providing each of us with books matched to our age and interests. Sometimes, we discovered, she would hide a crisp five-dollar bill between the final two pages, our reward for reaching the end of a challenging book.

And on her oak teacher’s desk stood her prized possession: a glossy, black Royal manual typewriter, bought sometime early in their marriage and always kept in near-perfect condition, in part by never letting her grandkids play with it.

And so when we each left for college, our first apartments, or to start our own families, we would get regular letters from Grandma Hickok, some handwritten in her perfect penmanship or typed on her Royal typewriter. When grandpa died in 1985, grandma soon moved off the farm and into town, but her oak desk and Royal typewriter went with her, and remained there until she died in 1996 at the age of 91.

Not long after that, I began asking about grandma’s Royal typewriter, but no one had any idea what had become of it. I never forgot about it, however, and occasionally was tempted to buy a similar typewriter when I would come across one in an antiques shop, but never did.

I knew it just wouldn’t be the same.

When I was back at my parents’ home two weeks ago, my mother encouraged me to venture into the large attic in their 1919 foursquare house, where she and my father have lived in since 1951. I used to play in our attic when I was a child, and had left some things behind that I thought I might want to bring back to North Carolina with me, so while my father was taking a nap before our next project, I climbed the stairs and pushed open the heavy pine trapdoor leading into the attic.

Now, my parents’ attic is fodder for an entire column of its own, so I’ll skip over nearly everything I discovered that had been pushed, stacked, piled, packed, hung, and crammed into it, except for one thing shoved back into a dark, tight corner under the north eaves: my grandmother’s black Royal typewriter.

Hidden beneath a stack of winter coats and still under its brittle plastic dust cover, all I could see was the nickel-plated lever that advanced the hard rubber roller, but that was all it took. Ten minutes later I had hauled all 39 pounds of it down to their kitchen table, where everyone confirmed that yes, it was Grandma Hickok’s original typewriter, and no, no one knew how it had gotten into the attic sometime back in 1996.

Needless to say, the next day I shipped it back to North Carolina, where I tracked down Robert Taylor, who collects, cleans and repairs antique typewriters. A couple of days later Robert called to say it was ready, and right now my grandmother’s Royal typewriter sits here in my office, next to my father’s original oak Arts and Crafts dropfront desk, repaired, cleaned, oiled, and ready for me to write my first letter on it.

As soon as I can find the “Send” key. 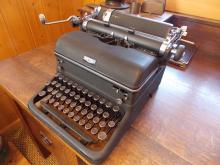 Send somebody a real letter this week!