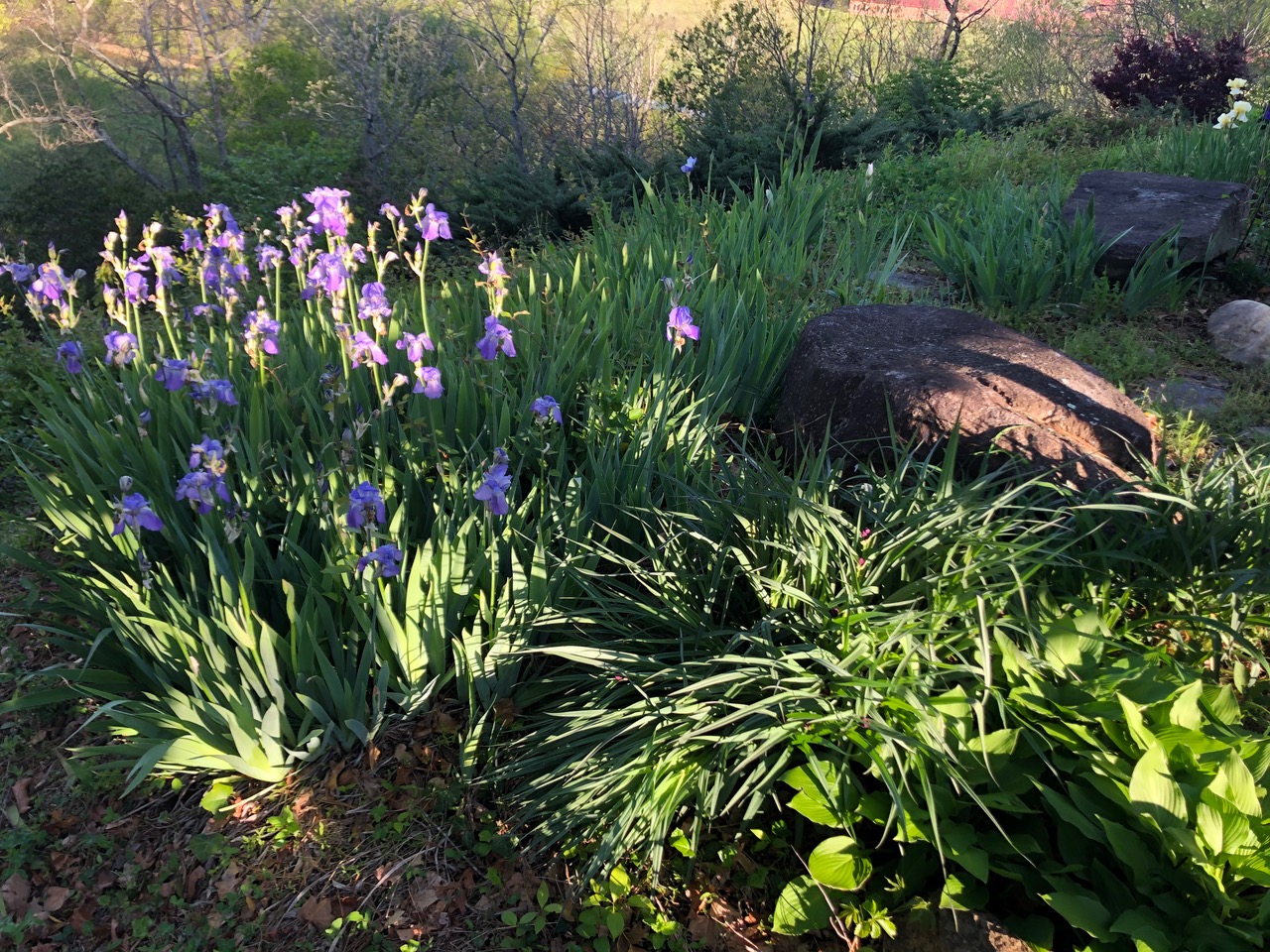 One problem with building a virtual online soapbox from which you can spout your opinions on just about any subject is that you can give people the impression you are an expert. Such was the case when a homeowner called me last week wanting to hire my services as an Arts and Crafts garden designer.

It’s a subject on which I have occasionally expressed my personal opinions, but not one on which I would ever consider myself to be an expert. I embody the confession: “Good ideas are meant to be borrowed, great ones to be stolen.”

Since some of my former columns have dealt with landscape projects which Leigh Ann and I have undertaken, I did think it might be worth a few minutes to show you how they look several months later. 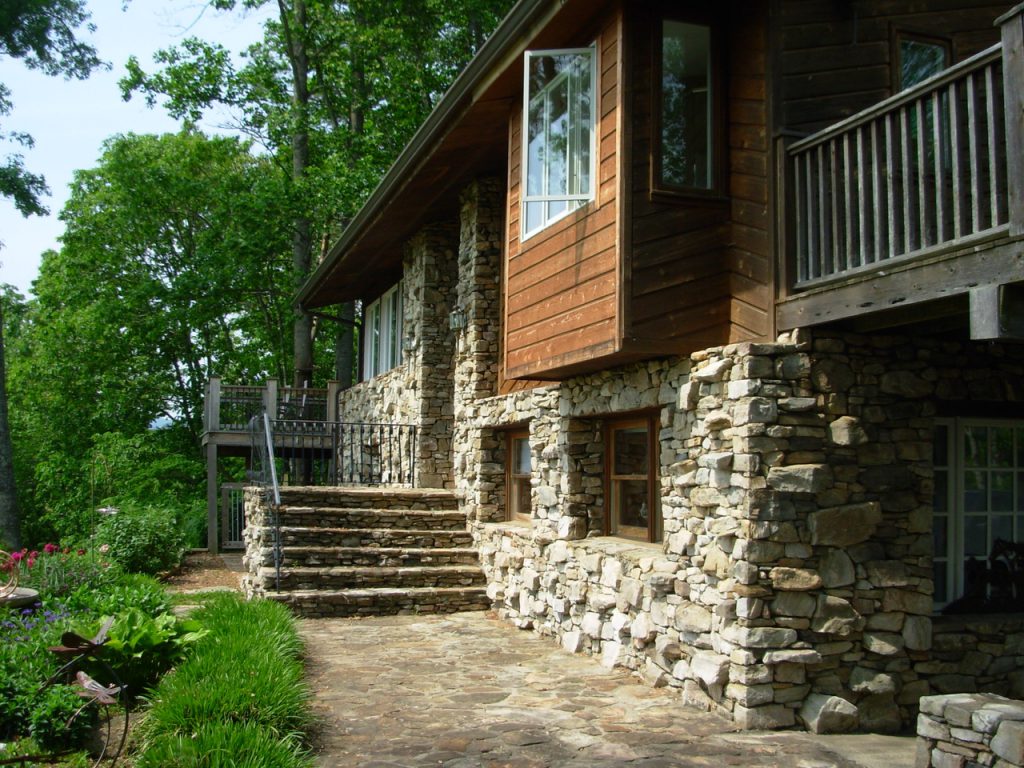 When we bought our 1970’s ranch house, the west façade seemed in need of some Arts and Crafts detailing. Fortunately, the previous owner had faced the original red brick with native granite. I followed his lead by adding cedar siding above it, so all that was left for me was to then add an Arts and Crafts pergola. 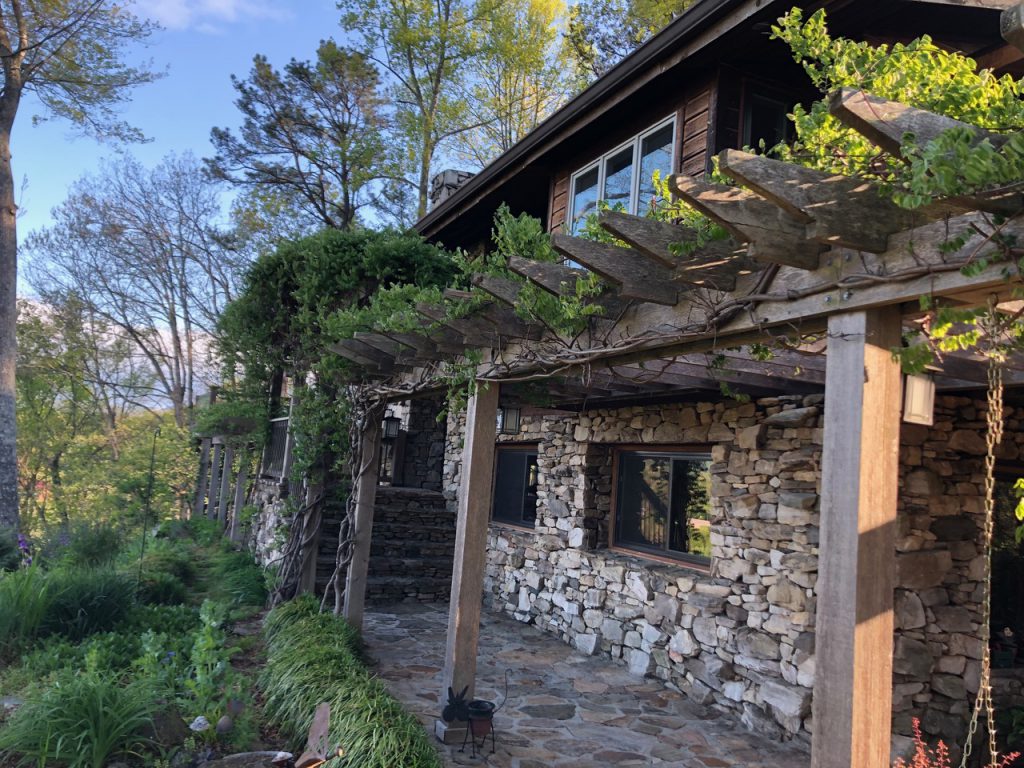 And, a few years later, what’s a pergola without some vines growing on it? 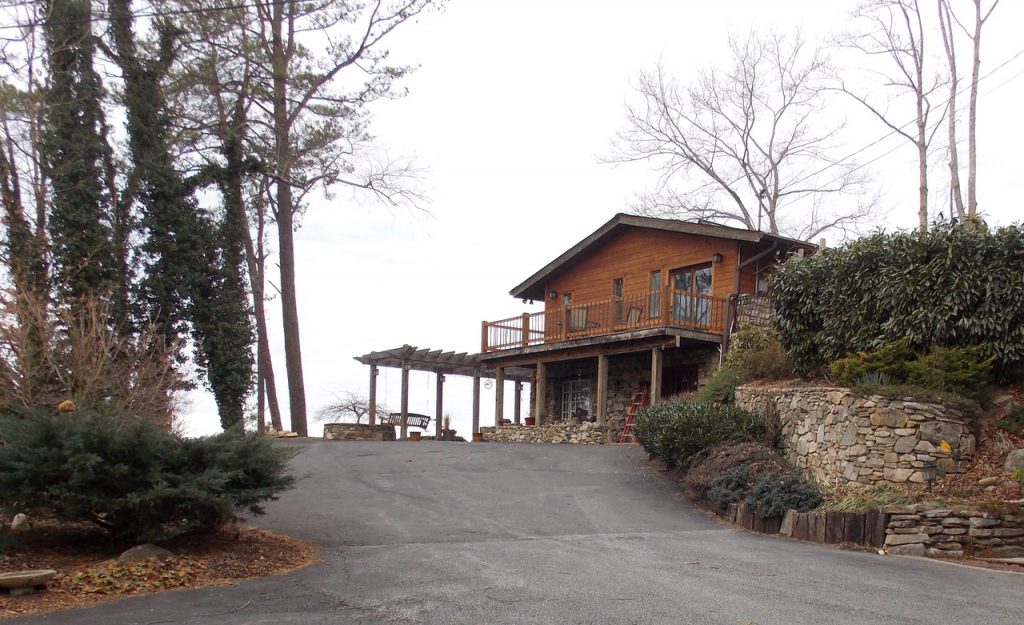 Our ranch house originally featured parking for two cars inside the lower level. Again, a previous owner had filled in the garage doors and remodeled the interior into bedrooms, but he left the asphalt driveway leading all of the way up to the house. 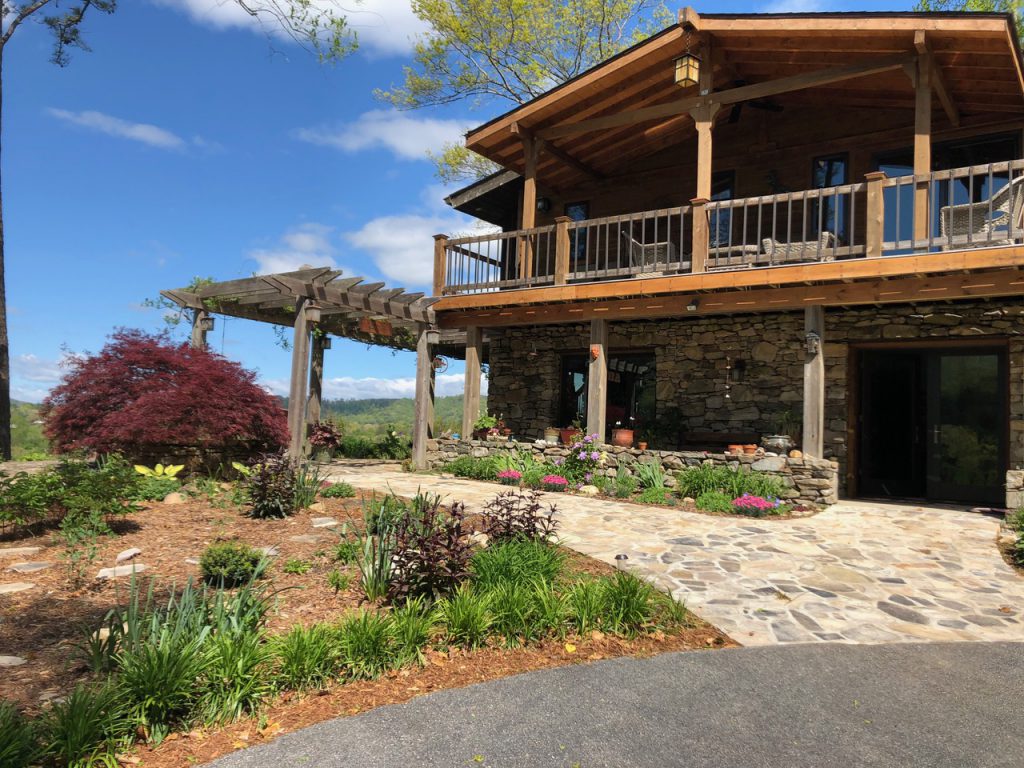 So, last year we removed several yards of asphalt and clay, replacing them with better dirt, a flagstone walkway, and plantings. While a chilly spring has slowed several of the blooms, the garden is well on its way to maturity. 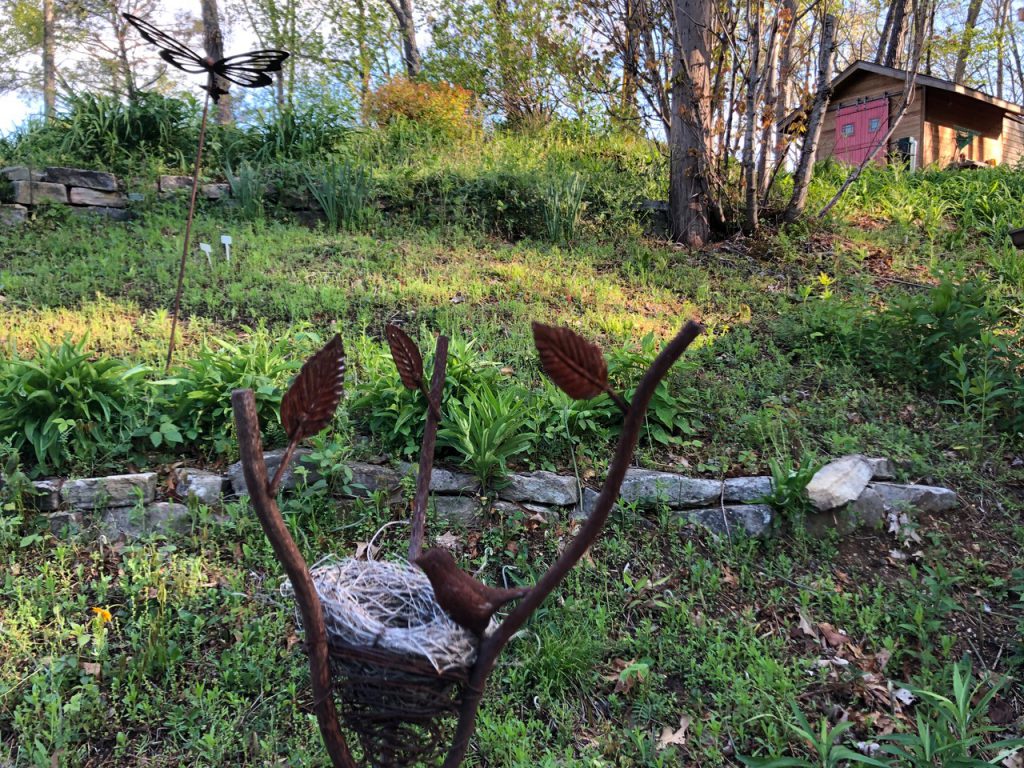 Gardening on top of a wooded knoll comes with the added challenge of combating erosion while also creating planting beds that you can stand on without tumbling down the mountain. For these I enjoy assembling dry-stack granite walls, using dirt rather than mortar to hold the rocks in place and working to make the rocks look as natural as possible. 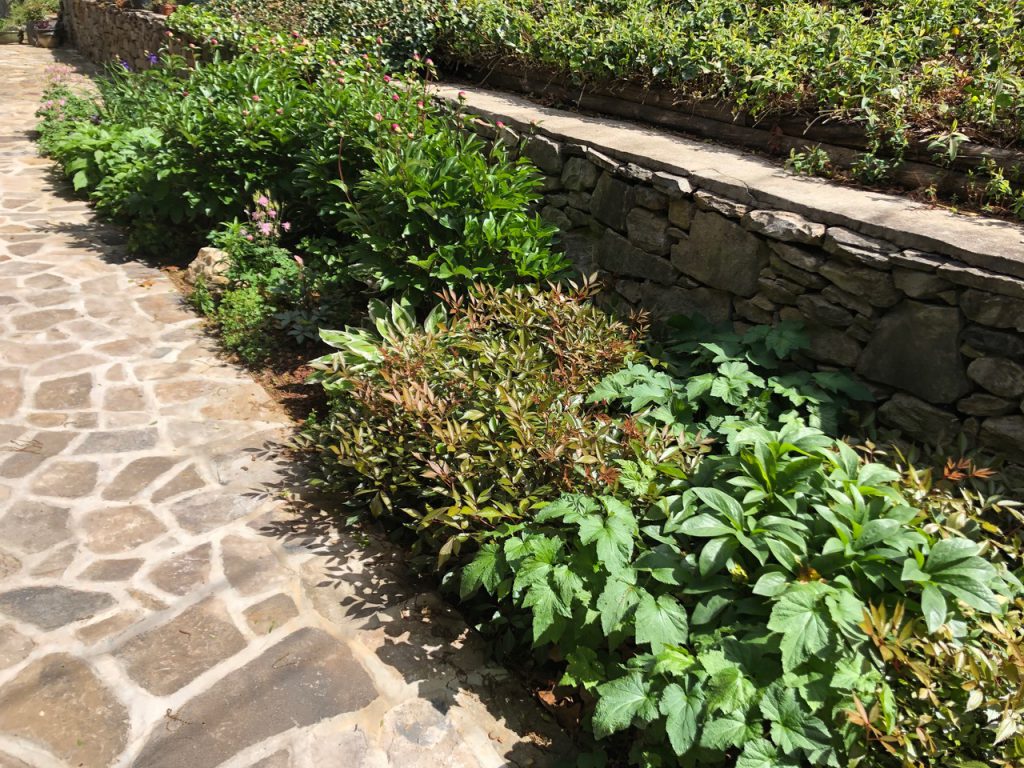 And when you do have a mortar wall, use larger shrubs in front of it to soften the appearance of a straight rock wall. 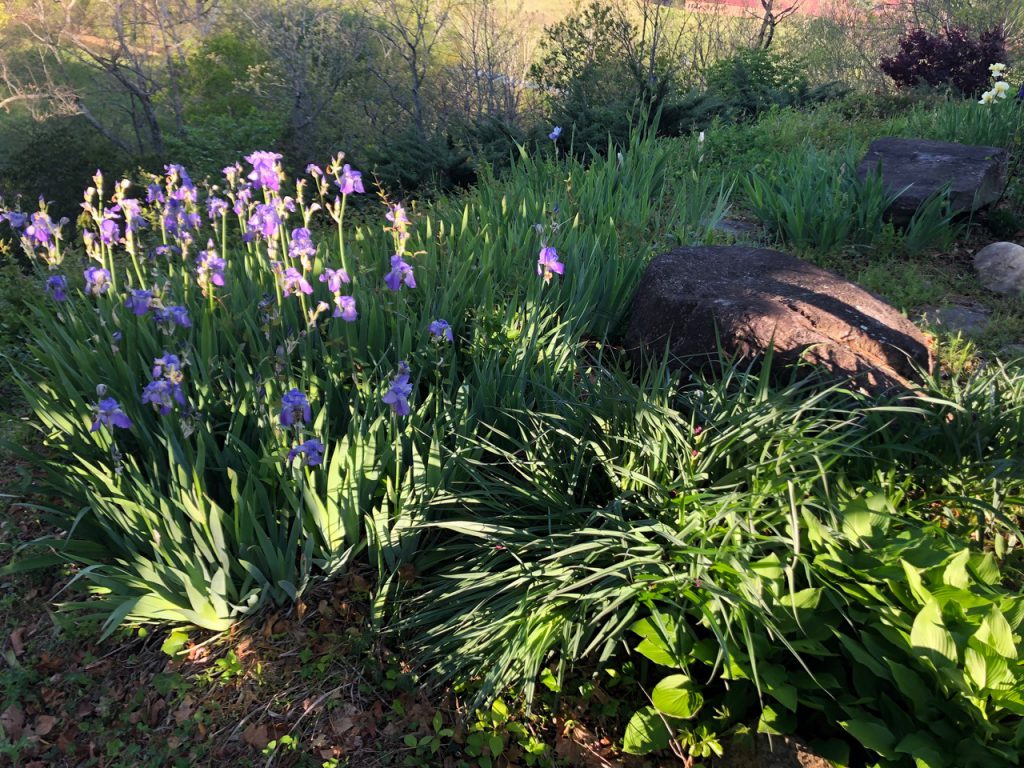 Finally, a few tips from a non-expert on designing an Arts and Crafts garden:

Build with rocks native to your area;

Same for plants and shrubs;

Use large rocks as focal points, but put them in the ground, not on the ground; 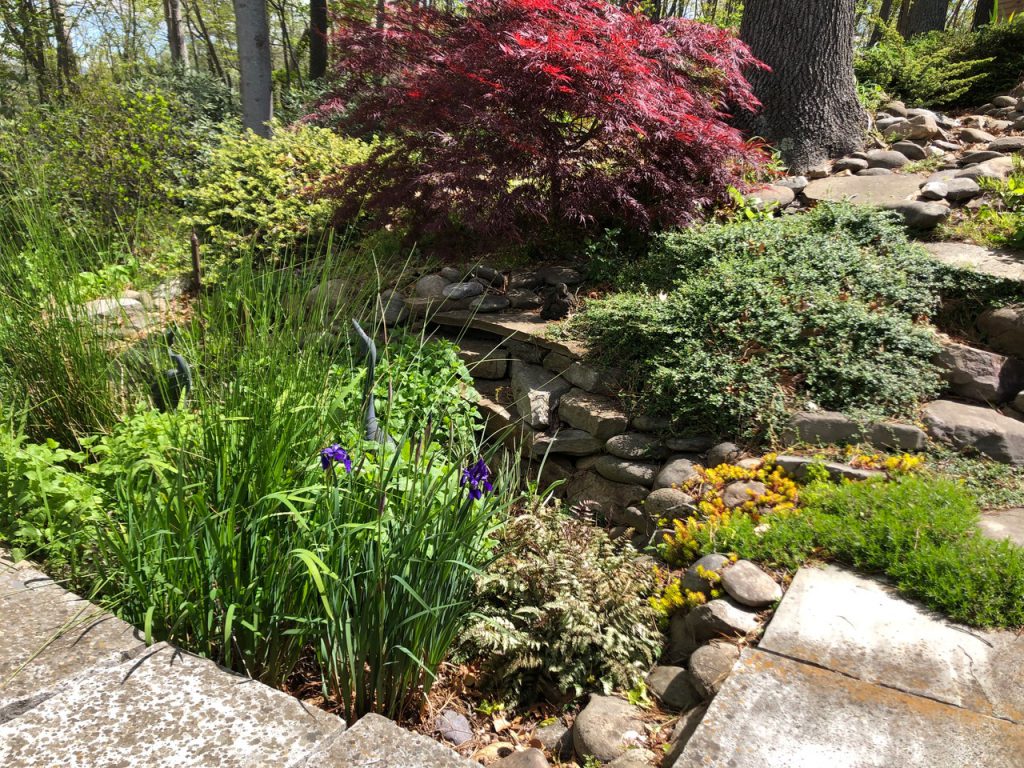 A water feature, regardless how small, takes far more time to maintain than to build, especially if you have trees overhead. After three years of pulling rotten leaves and muck out of our shallow pool, we drained the water, poked holes in the rubber liner, brought in dirt, and turned it into a bog garden. 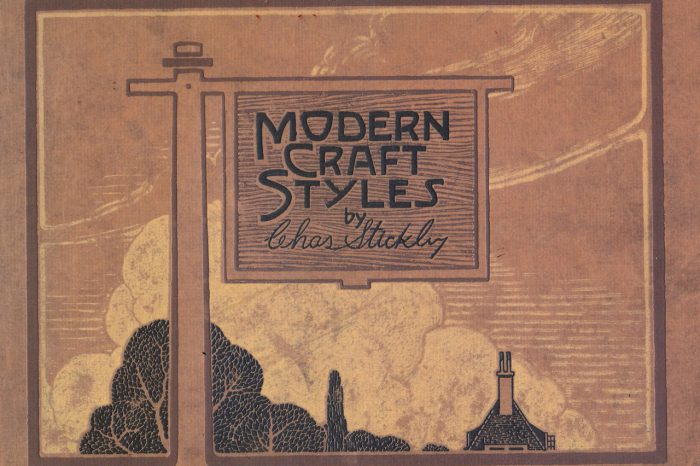