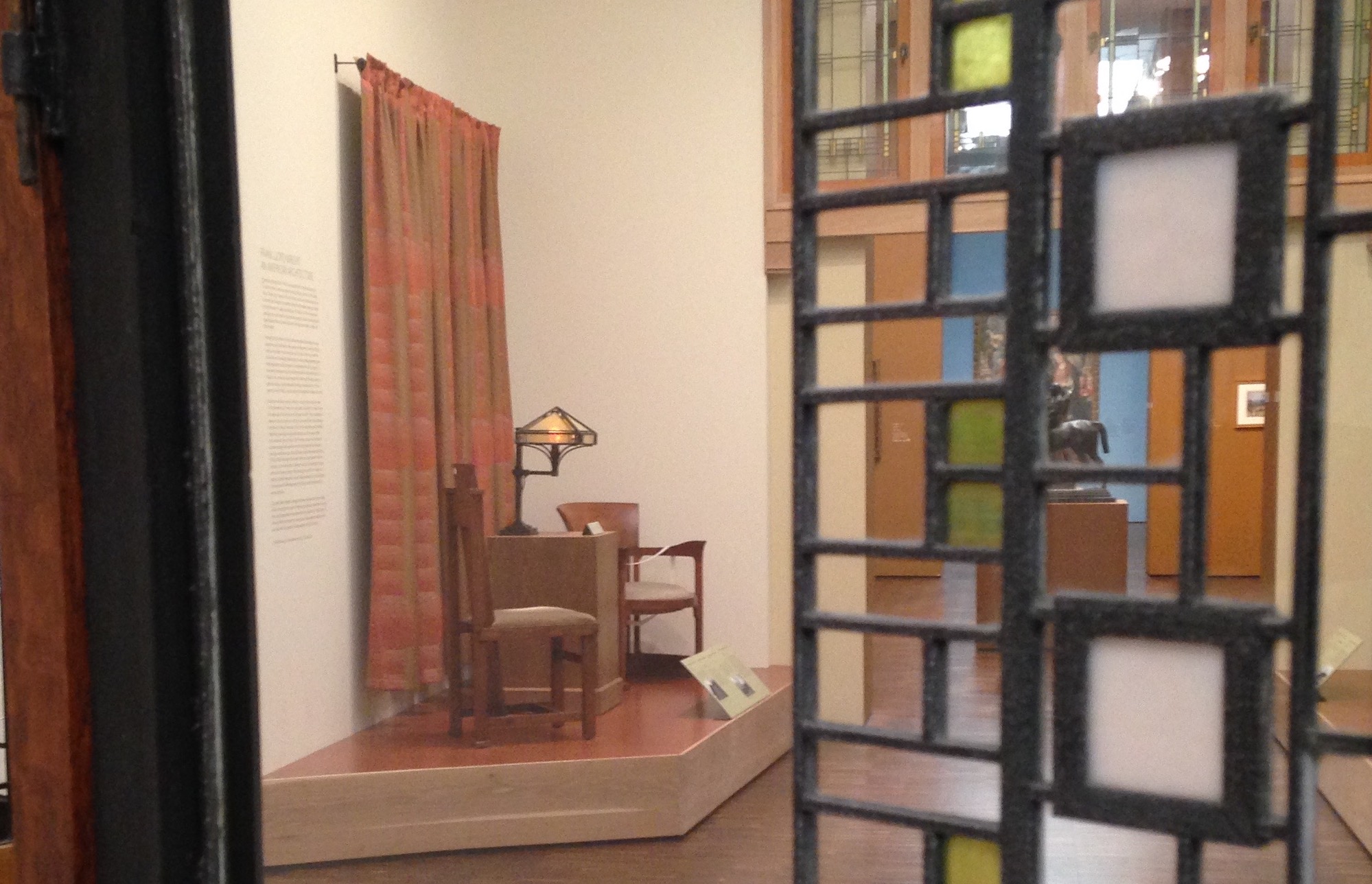 As you may have noticed, in recent weeks we have featured articles about the architecture of Frank Lloyd Wright, universally celebrated as the most influential architect of the 20th century. 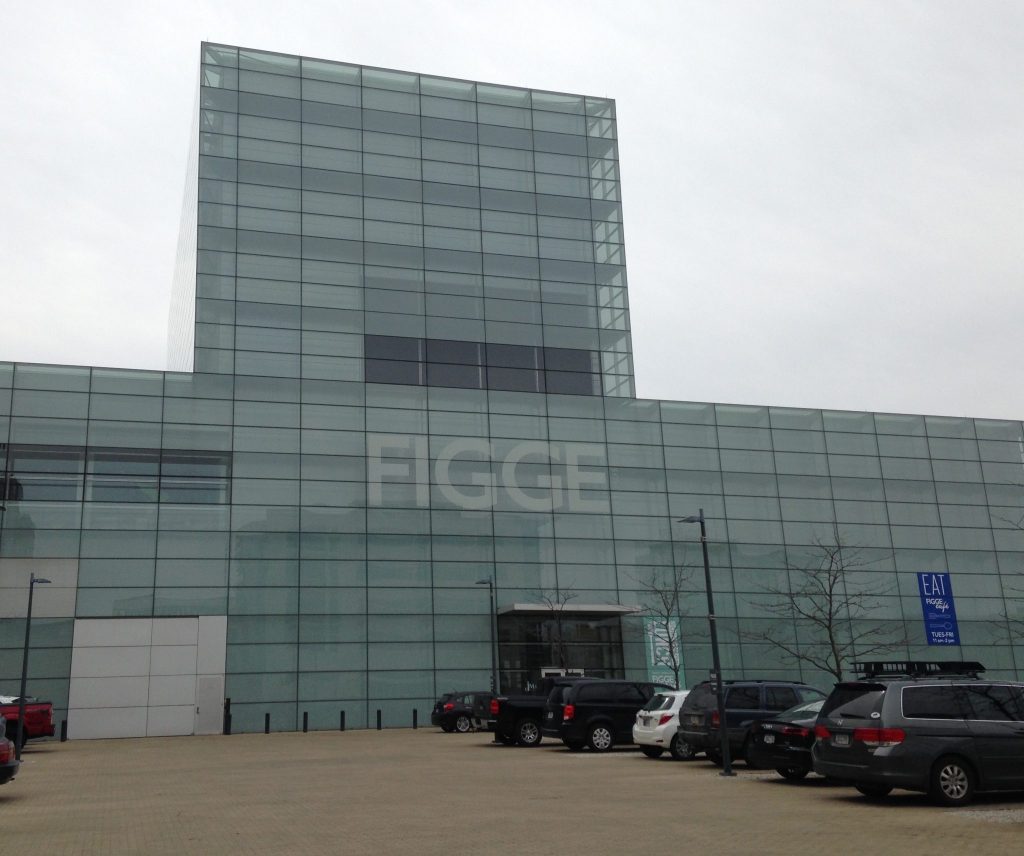 Coincidentally, I was recently in Davenport, Iowa, where I stopped by the Figge Art Museum, located on the banks of the Mississippi River. While not a Frank Lloyd Wright design, the Figge may well have the most extensive collection of art by Iowan Grant Wood, one of my favorites. This time, however, much of it was either in storage or had been sent to New York for the current Grant Wood retrospective at the Whitney Museum.

In its place the staff had assembled an exhibit of furniture designed by Frank Lloyd Wright, including several of his chairs created over the course of four decades. While often overshadowed by his architecture, from sprawling Prairie School residences scattered across the Midwest to the spiraling Guggenhein Museum in Manhattan, this modest collection of chairs stopped me in my tracks.

“Had you shown them to someone completely unaware of their history,” I reasoned, “no one would have surmised that they all came from the same hand.” 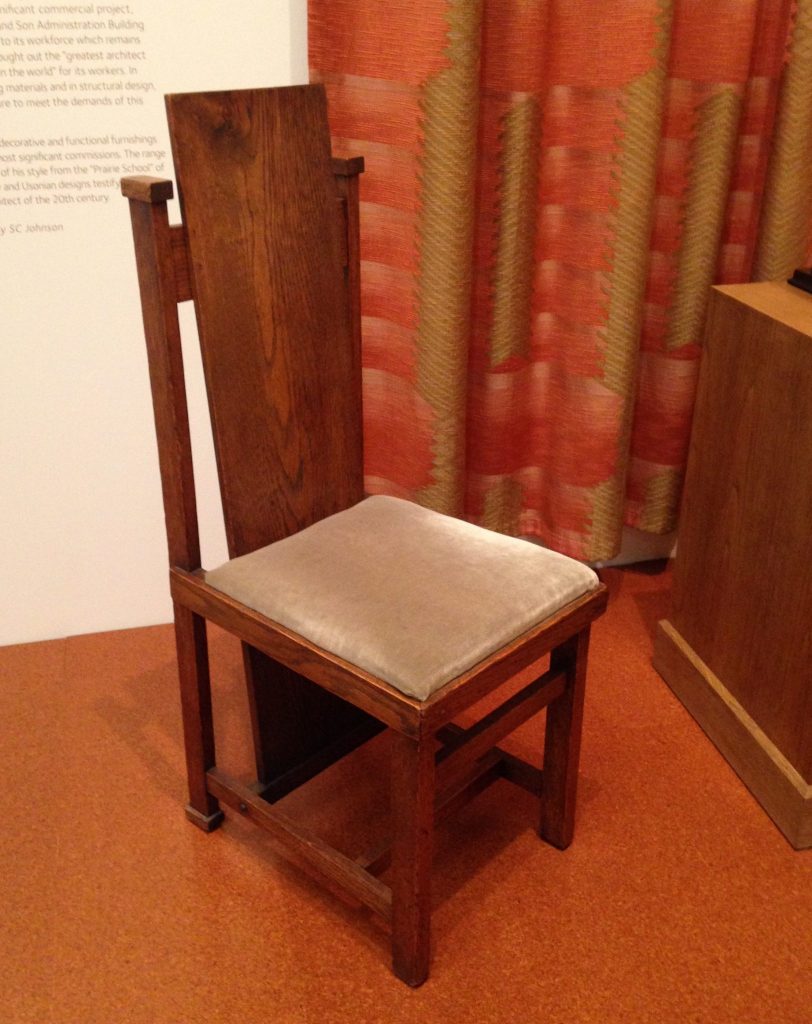 For starters, this oak slant-back chair appeared in his home and studio in 1911. He also designed a set of tall back spindle chairs for his dining room, as well as for some of his early clients. 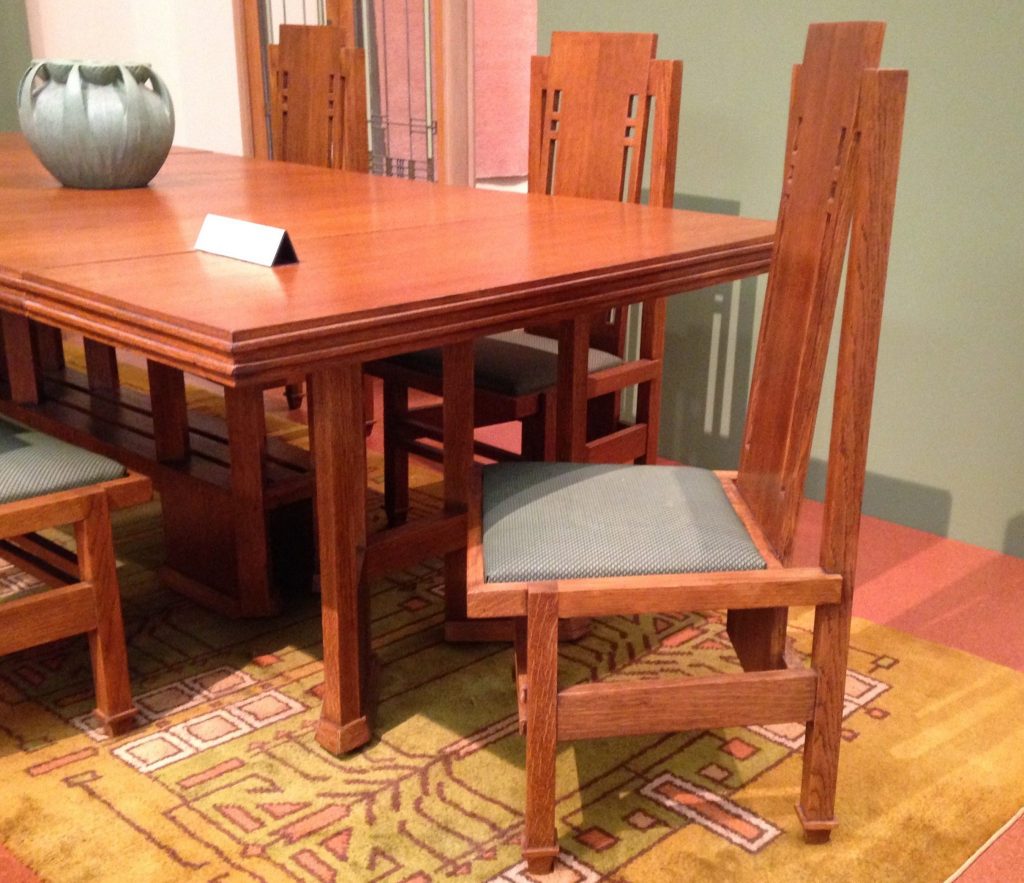 Here is a variation of his early slant back chair, this one with a cut-out design. 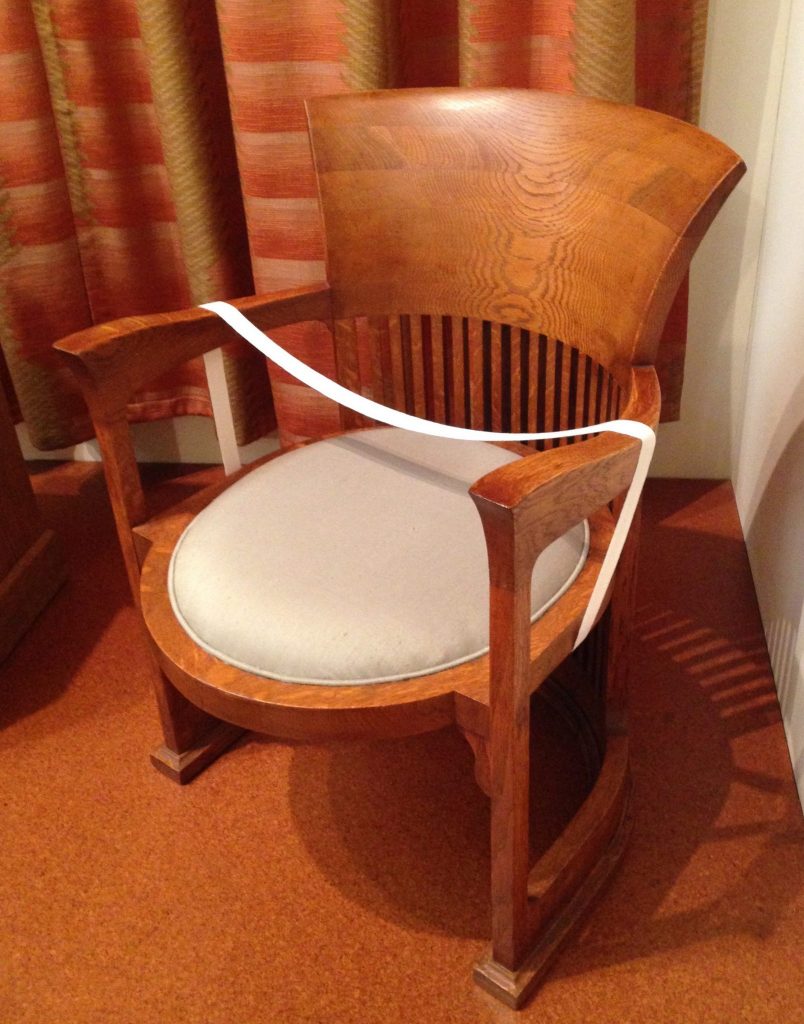 Wright first designed a barrel chair for the Darwin Martin House in Buffalo in 1904, then modified that design, as shown here, in 1937 for the Herbert Johnson family. Note the spindles, which he often incorporated into his designs. 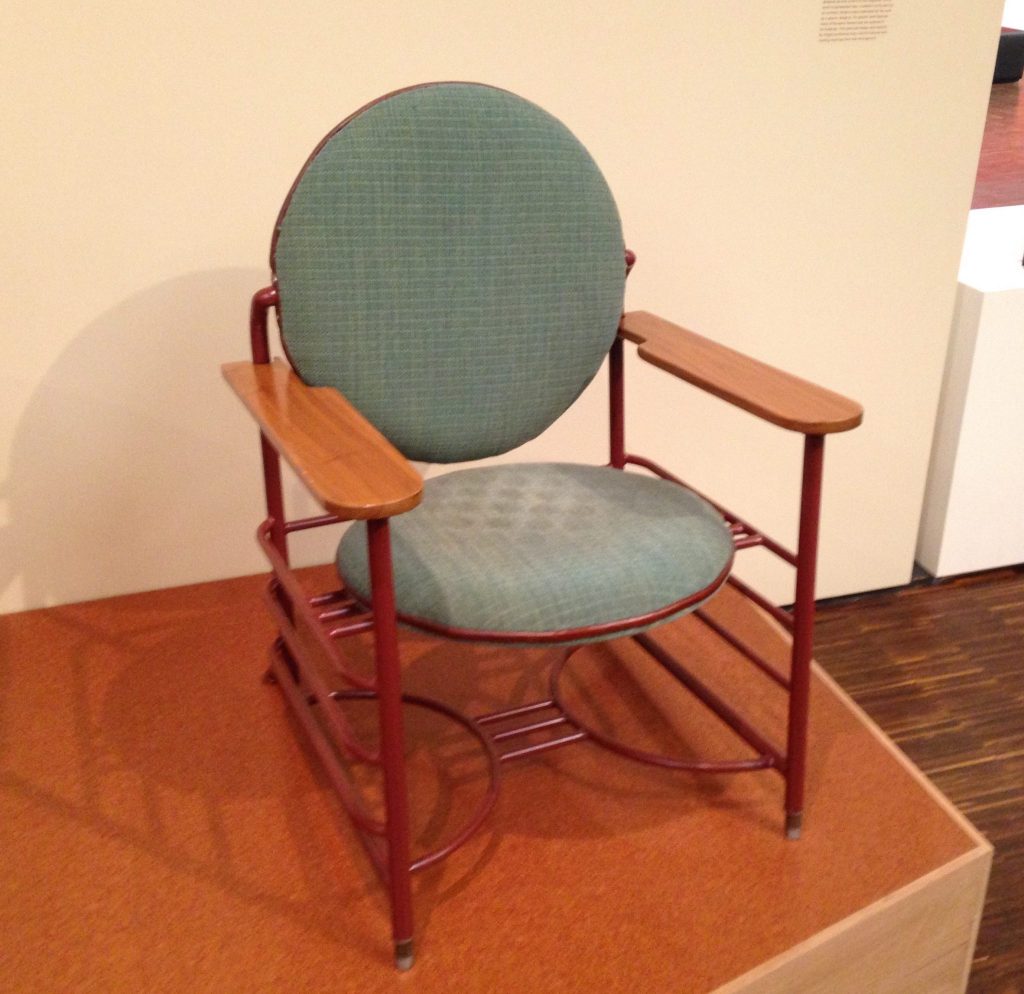 And just because he could, Wright demonstrated to everyone that he could just as easily design a contemporary chair using steel tubing and fabric rather than oak and leather. This armchair design resided in the S.C. Johnson Wax administrative offices beginning in 1936. As early as 1903 he had created three versions of a painted steel chair for the Larkin Building in Buffalo. 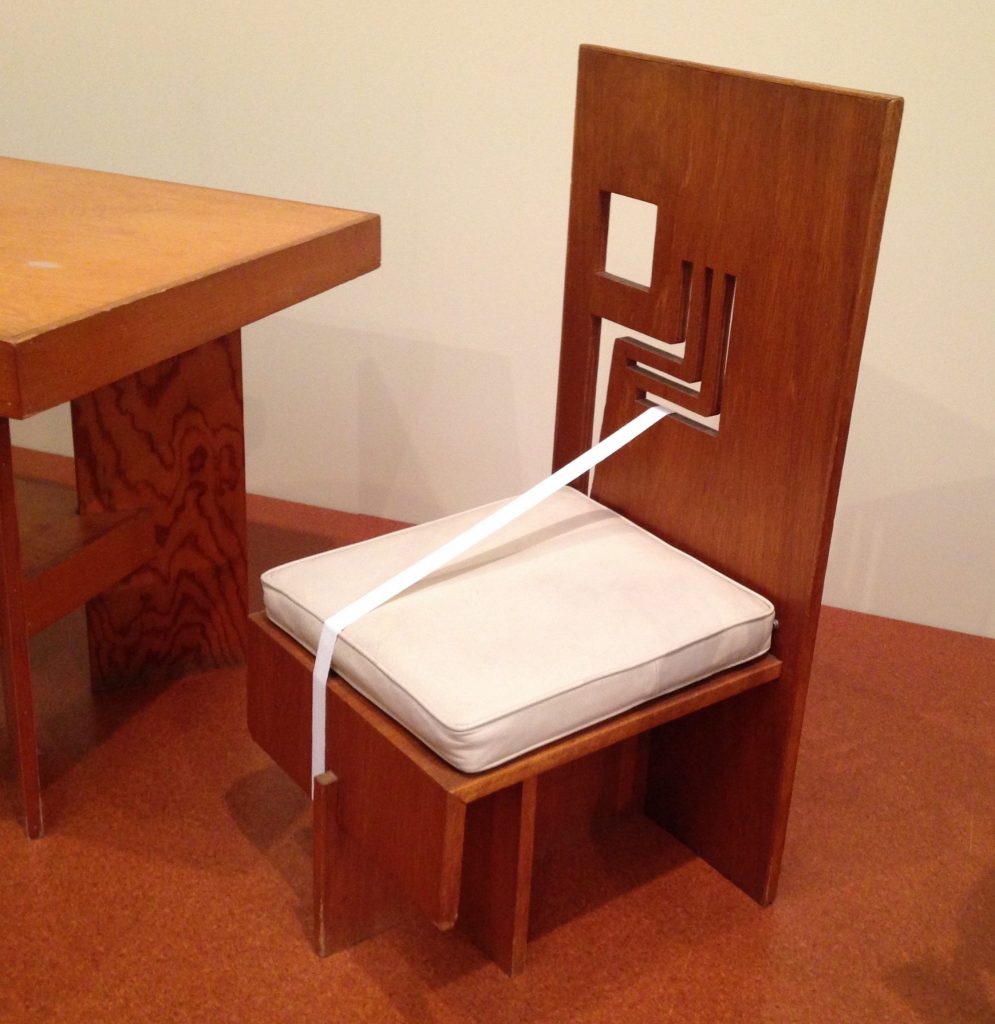 When plywood provided an option to individual boards, Wright again demonstrated that he could adapt a commercially-available and inexpensive material for residential use. This chair from his later Usonian collection proves, once again, that Frank Lloyd Wright not only thought outside the box, he created the box. Taking a look at that wide, one-piece back, with roots reaching down to his earlier Prairie School designs, Frank must have said to himself, “It needs a cut-out.”

I’m not sure if anyone has taken the time to count the number of different chair designs Frank Lloyd Wright created, but I suspect it surpasses fifty.

That’s genius, even if just in a chair.

“A doctor can bury his mistakes, but an architect can only advise his clients to plant vines.” – F.L. Wright 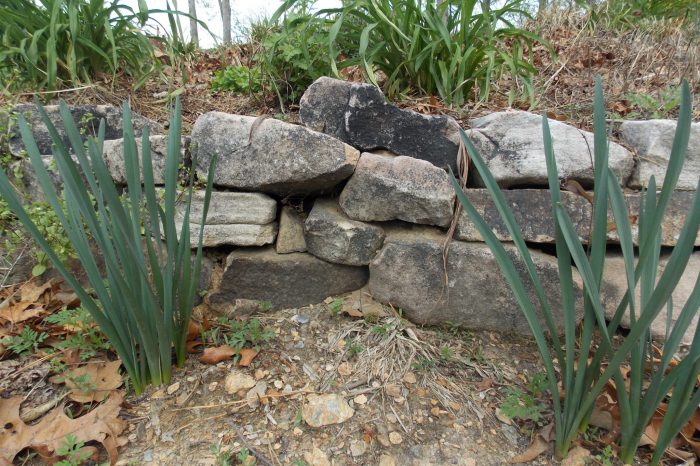