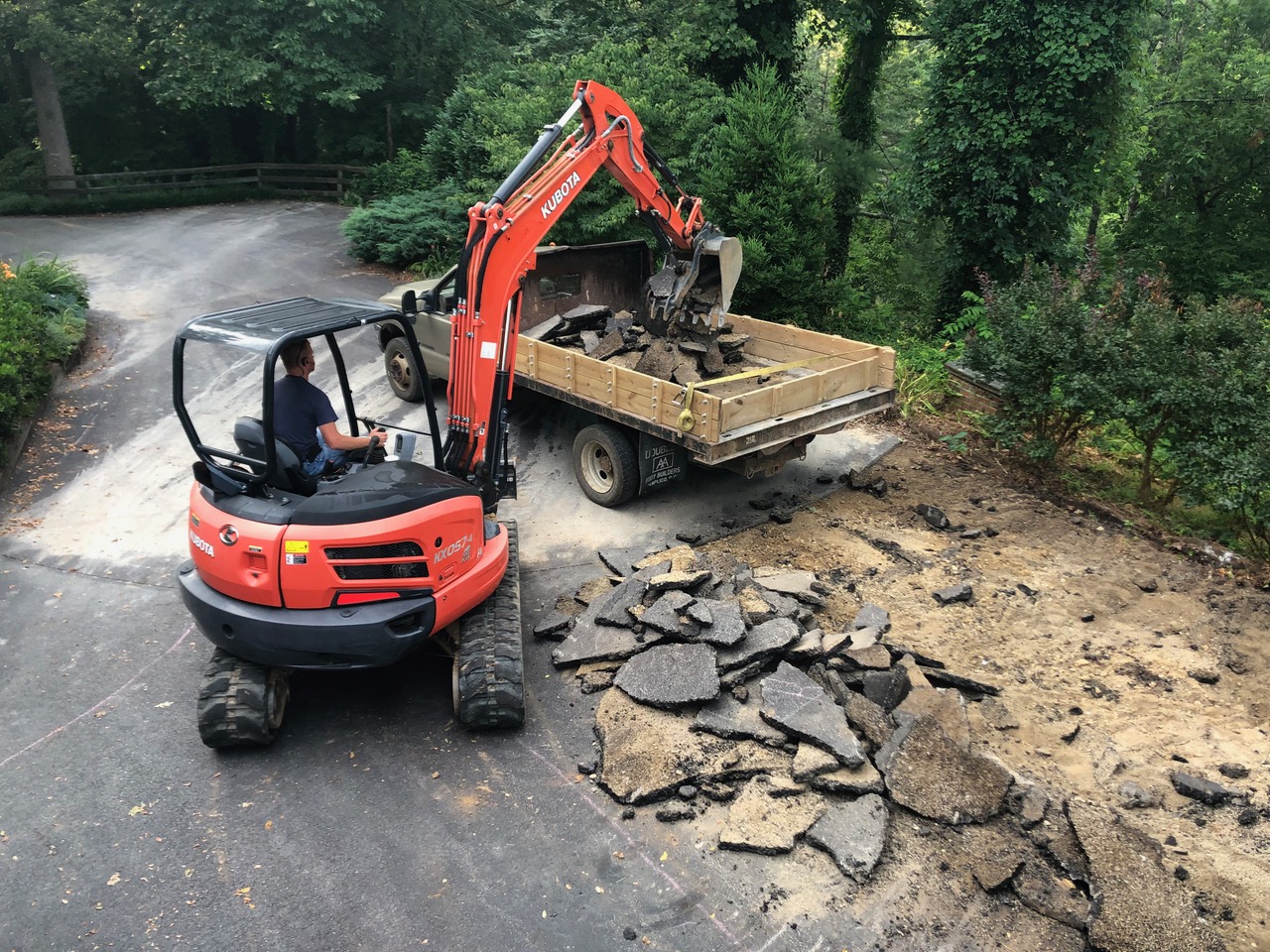 After several years of debating and discussing what we should do with our over-sized and unnecessary slab of asphalt in front of our 1972 ranch house – which originally had a two-car garage inside the lower level – we attacked it last week. 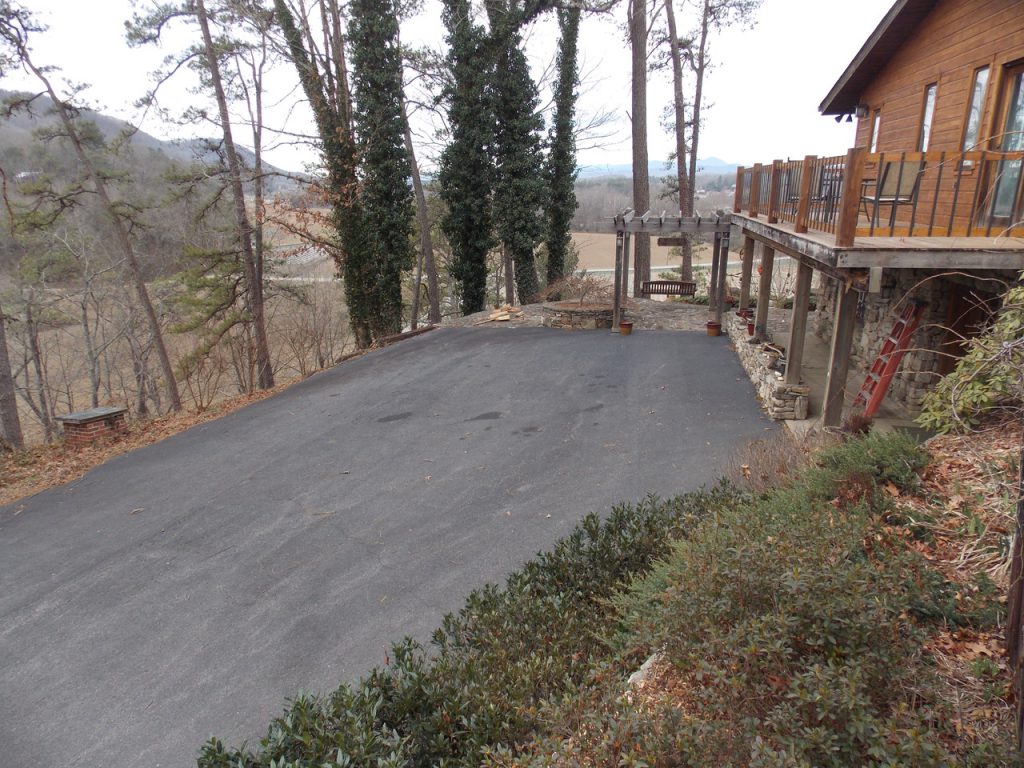 My friend Cheyenne rolled in at 6:30am, as the afternoon forecast called for temperatures near 90 degrees and the possibility of strong thunderstorms. I was understandably nervous, as I had no idea how thick the asphalt would be or how easy it would be to remove. In addition, we knew that the water pipe and electrical lines leading from the well to the house passed beneath some of the asphalt I wanted to remove. Logically, each should have been buried at least 24 inches deep, but logic cannot always be assumed when it comes to home construction. 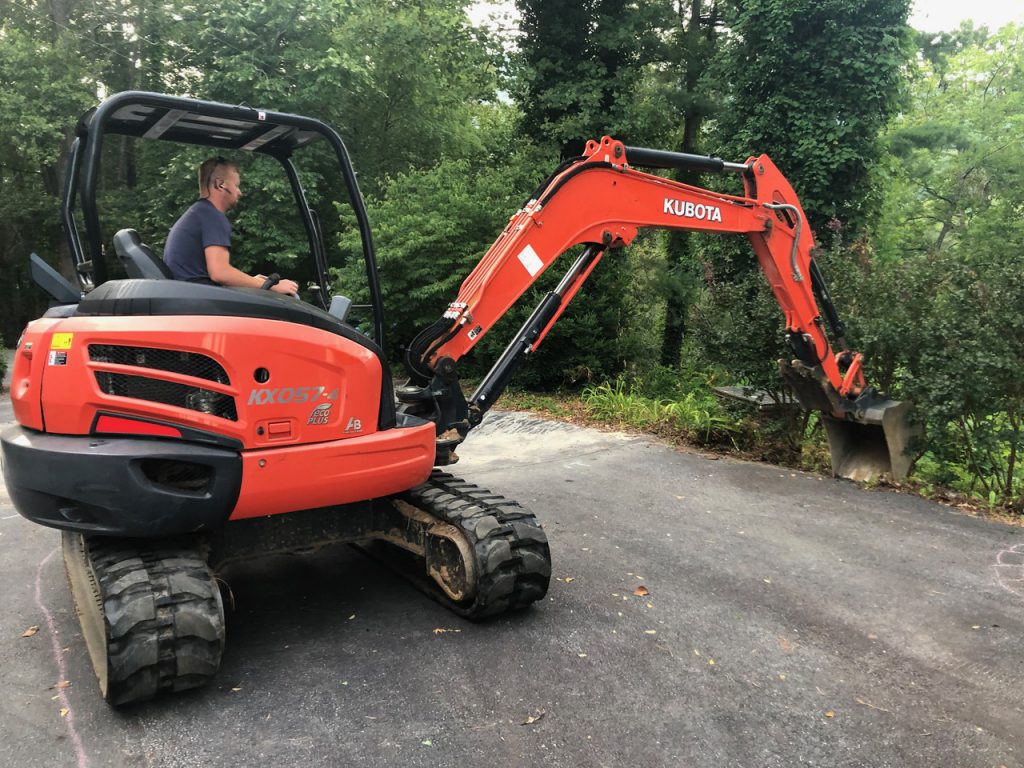 Cheyenne proved to be a master at maneuvering the track hoe and its bucket, carefully slipping the steel teeth at the far edge of the driveway for his first bite. 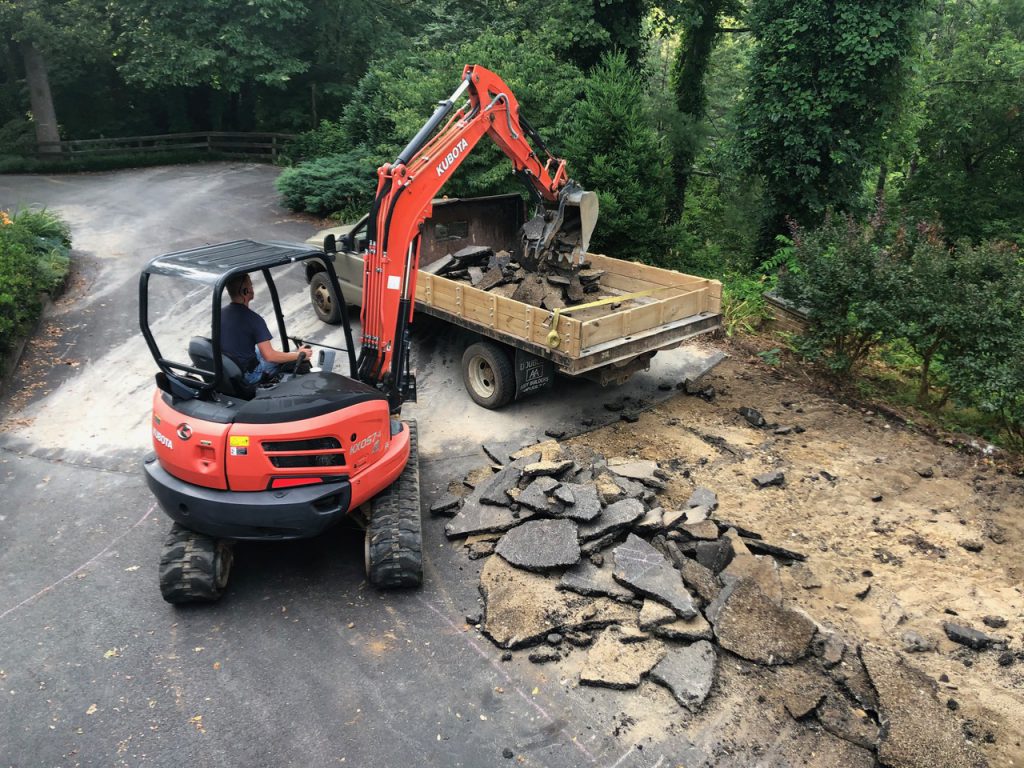 In just a matter of minutes Cheyenne had pulled up nearly a third of the asphalt, which he carefully loaded into his truck before hauling it away. Before we were done he had filled and emptied his truck three times. 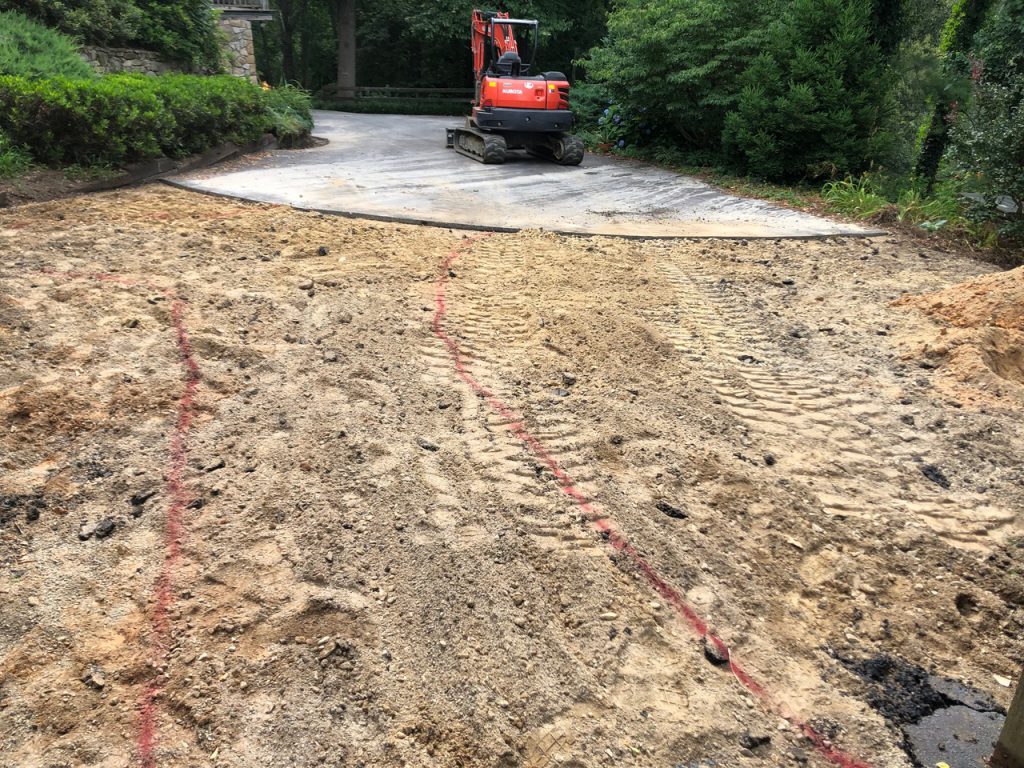 While he was dumping the final load, I transferred our measurements to the layer of packed dirt and gravel we discovered – as we had expected – beneath the asphalt. 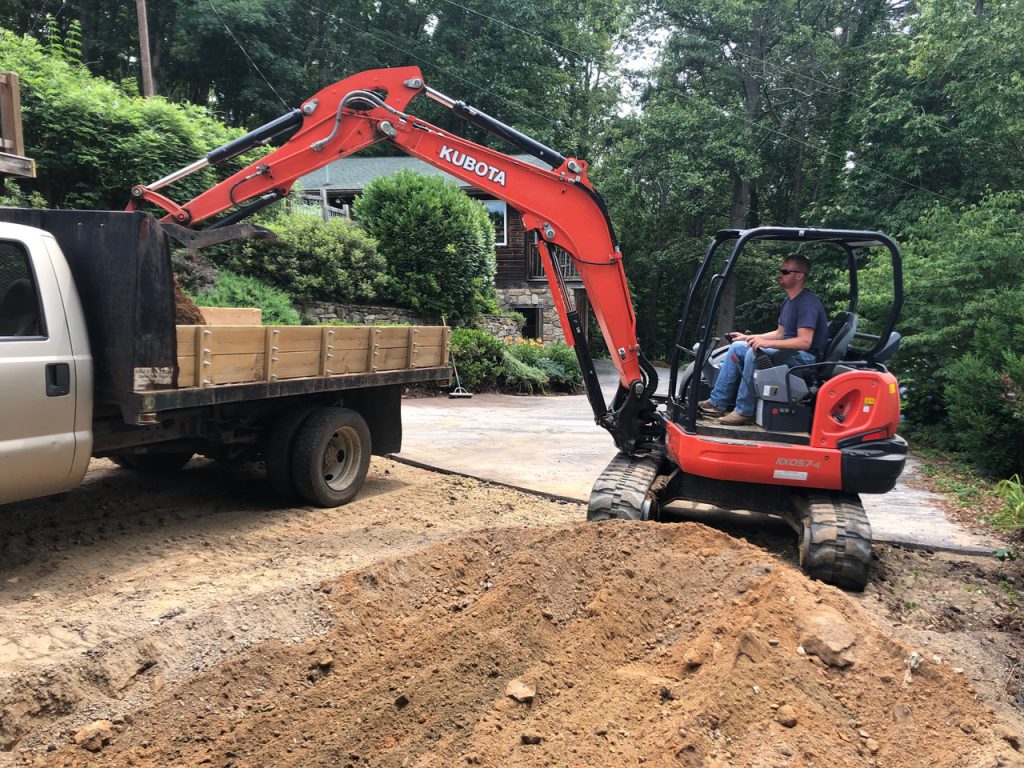 The asphalt had been laid back in 2001, so I knew we would find 29 previous years of gravel under it. Our stonemason asked that we leave it as a foundation bed in the areas we are planning for him to lay a flagstone path. Leigh Ann, my garden designer, also asked that Cheyenne remove about 15 inches of gravel and clay in the adjacent areas where she would be planting shrubs and perennials. 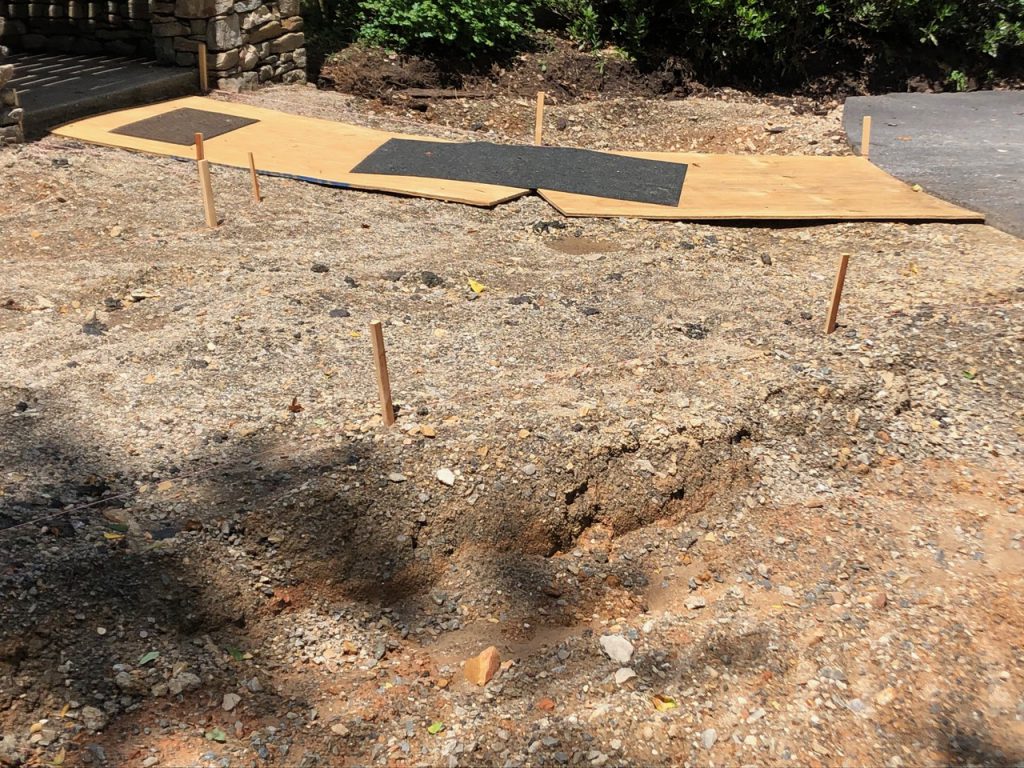 The result looked like we were installing a water feature, but I had made that mistake several years earlier and wasn’t about to do that again. The next day an evening thunderstorm dumped nearly two inches of water on us, but we were relieved to see that the soil drained well. Once our stonemason gives us the go ahead, we will bring in a couple of truckloads of topsoil for Leigh Ann to start planning and planting her next garden area.

When building with rock, calculate how much you will need – then double it. 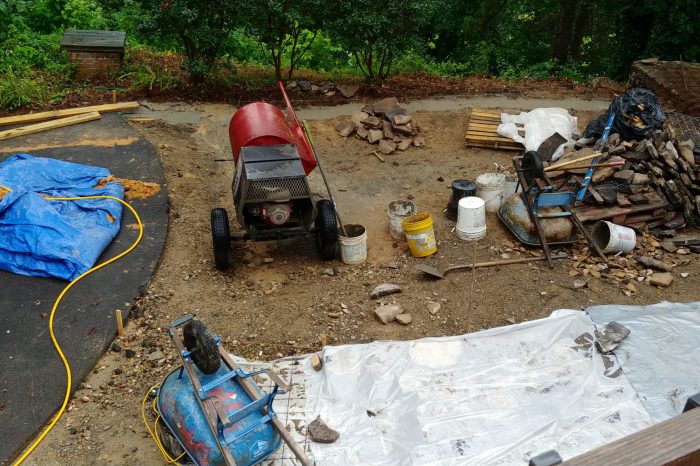