Even the Wall Street Journal ! ! !

I grew up in Illinois, taught school in Iowa, and moved to Durham, North Carolina, all before 1986, the year I made my first little journey to Asheville. Two years later I was organizing the first of 28 Arts and Crafts Conferences at the Grove Park Inn and starting my first book on the iconic 1913 Arts and Crafts resort hotel.

The rest, as they say, is now history.

And it was Arts and Crafts that first drew me to Asheville, after a local antiques dealer called me in Durham to see if I was interested in a Gustav Stickley oak sideboard, a Biltmore Industries carved bowl, or a pair of Roycroft “Princess” copper candlesticks.

The next afternoon I loaded them all into the back of my Dodge Caravan and, on the way back to Durham, thought to myself, “That’s a special town.”

One year later, I was living in Asheville in the midst of a ten-year restoration of a 1914 Arts and Crafts home designed by Richard Sharpe Smith. He was a young English architect hired by Richard Morris Hunt to supervise the five-year construction of the 250-room Biltmore House. Like so many others, Richard Sharpe Smith remained in Asheville and started his own business.

As you may have noticed, in recent years Asheville, often called a “New Age Mecca” with nearly 90,000 residents and nearly two million visitors a year, has made nearly every Top Ten List of Best Cities to visit, retire, romance, start a business, hike, shop, drink craft beers, do yoga, eat, and my personal favorite — “To Reinvent Your Life.”

It worked for me. (A couple of times.)

Yesterday Leigh Ann’s parents, who began spending so much time in Asheville they bought a second home here, dropped off a recent issue of the Wall Street Journal with a feature story that included this:

“Families are drawn to Asheville for its small-town feel, good schools and great outdoors. Young hipsters come for the eclectic vibe, craft breweries and lively music scene. And older Americans like the gentle seasons, health-care facilities and educational opportunities.

“Boosting Asheville’s appeal are its distinctively different neighborhoods. Young progressive residents flock to the burgeoning River Arts District, with its vibrant arts scene. The cool crowd also likes West Asheville, a funky area across the French Broad River that has tattoo parlors, bike shops and creative eateries. Recently Asheville’s downtown Art Deco district was filled with evening strollers, to a backdrop of street musicians and noise spilling out of restaurants, many of them with a farm-to-table approach.

“In the summer there are free downtown concerts, along with art gallery walks and annual events, such as an Arts and Crafts show [that’s us!] and a beer festival.”

And now we’ve made the Wall Street Journal.

Thanks to all of you!

Remember: Spring comes to Asheville the third weekend of February. 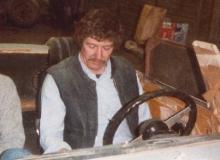 Have a great holiday week!

PS – Need the perfect Arts and Crafts stocking stuffer? We can email you a printable gift certificate in any amount to be used at any booth in the National Arts and Crafts Conference Shows at the Grove Park Inn on February 20-22. Just call Alex or Bruce at 828-628-1915.

Top: The Sunset Terrace at the 1913 Grove Park Inn.

Center: The Richard Sharpe Smith-designed Arts and Crafts homes in Asheville’s Biltmore Village have been restored as cafes, restaurants, shops, and galleries.

Lower: That’s me in 1979 sitting in my 1973 MGB during its restoration. (I lost the mustache and the long curls, but still have the car.) That was the same year Mrs. Summerwill introduced me to Arts and Crafts in her basement, but that’s another story….