Exploring Another Arts and Crafts Mecca

Exploring Another Arts and Crafts Mecca

Its not often that you’ll find an Arts and Crafts landmark surrounded by wooly bison, graceful elk, and earthen pots of boiling water — then rocked awake early in the morning with a 3.1 magnitude earthquake.

But at the Old Faithful Inn, that’s just another typical day.

Everyone has seen photographs of this iconic 1904 national parks landmark, even if just in the background two hundred yards away from its most famous attraction: the Old Faithful geyser, letting off steam every 93 minutes or so before a crowd of awe-struck onlookers, each armed with cameras and cell phones, determined to capture the moment forever.

(And, yes, someone did ask, “Do they turn it off at night?” — the result of too much time spent at Disney World and not enough time in the Real World.)

Tens of thousands of visitors stream into the 2 million acre Yellowstone Park each day, and a large percentage of them do not leave before driving over to the grounds of Old Faithful and witnessing the towering inferno of water and steam. Then, most make the walk beneath the log portico and through the massive doors into what may be the most photographed hotel lobby in the entire country. Combine those numbers with the full house of overnight guests and you won’t be surprised when an afternoon in the Old Faithful lobby can feel a bit like Disneyworld.

But when the sun begins to set and the day visitors retreat to one of the other hotels in the park, their Orvis tents, or their over-sized recreational vehicles, the inn takes on a peaceful, calmer ambiance, inviting those who want to sit and marvel over the craftsmanship, the massive timbers, the tree trunks brought indoors to serve as pillars, their limbs recycled in 1904 as banisters and balustrades, you will begin to experience the living embodiment of Frank Lloyd Wright’s call for truly “organic architecture.”

Of course, having a bottle of wine along with a group of appreciative friends or family certainly makes the experience even that much more enjoyable.

The architect of this Arts and Crafts masterwork was 30-year-old Robert Reamer, who went on to design several other structures in and around Yellowstone during his highly successful career, cut short by a heart attack at age 64. To their credit, the staff at the Old Faithful Inn do recognize Robert Reamer through their daily history tours, a wall display, and several books available in the gift shop.

What I found disappointing, however, is that no one leaving the Old Faithful Inn could tell you whose craftsmen designed and made all of the original Arts and Crafts furniture still in use throughout the hotel and dining room, despite the fact that a shopmark depicting a craftsman leaning over his workbench is stamped or attached in plain sight to many of the oak settles and comfortable arm chairs.

Many of these pieces are unique to the Old Faithful Inn and remain in use today, so it is not often that one will show up in an auction catalog or even in a major Arts and Crafts exhibition.

And so it is that while a few visitors will leave the Old Faithful Inn knowing the name of Robert Reamer, virtually none will know that of Charles Limbert. 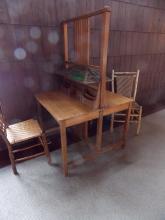 Photo: An original writing table designed by the Limbert Company. Note the use of square spindles over the built-in light.