To anyone living beyond the boundaries of Asheville, North Carolina, the name George Washington Vanderbilt, while sounding impressive, probably doesn’t carry with it any special significance, especially in the world of Arts and Crafts.

Born the tenth son of the richest man in America, George Vanderbilt was raised during the glorious opulence of New York City’s Gilded Age, where wealth was often measured by waste. Sheltered from the world of railroads and steamships where his father and older brothers played real Monopoly with properties and businesses, the shy, tall, awkward George was protected by his mother and older sisters, attending the opera, enjoying the theatre, and learning various foreign languages from tutors arriving daily at their Fifth Avenue mansion.

It was on a journey to Asheville with his widowed mother in 1888 that 26-year-old George first decided to spread his untested wings and spend some of his $10 million dollar inheritance. Calling upon the family’s architect, the venerable Richard Morris Hunt, along with Frederick Law Olmsted, the dean of American landscape architecture, in 1895 the young, unmarried Vanderbilt moved into his new winter residence: the 250-room Biltmore House, situated on a towering river bluff overlooking his 146,000 acres of fields and forests.

It would take an entire book to adequately described how the largest house in America was designed and furnished, but let me simply state that it symbolized nearly everything the emerging Arts and Crafts movement rebelled against, with one notable exception: hand-craftsmanship. While representing the ultimate in the late-Victorian style, there was nothing cheap, shoddy, or mass-produced in Vanderbilt’s home.

Quality craftsmanship was never sacrificed in the name of efficiency.

Among the simple pleasures which George Vanderbilt and his steady stream of guests enjoyed while on the Biltmore Estate was horseback riding on the trails Olmsted’s crews had cut through the forests below Mount Pisgah (5722′). Vanderbilt may well have been frustrated, however, by their inability to reach the summit of Mt. Pisgah before nightfall would invariably force the riders to turn around and head back to the comfort of the mansion and George’s renown collection of French wines — undoubtedly with a few sighs of relief.

With the passing of Richard Morris Hunt in 1895, it fell to his son Richard Howland Hunt to design George Vanderbilt’s second and least-known Asheville home: a sprawling Adirondack-style lodge situated along the crest of a ridge extending from Mount Pisgah, twenty miles from the Biltmore House.

Dubbed Buckspring Lodge, this was no ordinary, rustic log cabin. Constructed of massive chestnut logs and hand-hewn timbers dragged by mules up steep logging roads, the vaulted ceiling soared high above Vanderbilt’s awe-struck guests, warmed on chilly nights by a fieldstone fireplace nearly as large as those that would later be built in the Great Hall at the Grove Park Inn.

An open staircase with bark-encrusted spindles led to the second floor lofts, with guest bedrooms and spacious sitting areas overlooking the great room. Railings were draped with Cherokee blankets, and the rooms filled with Adirondack-style furnishings.

And there, in the middle of the rustic great room, looking far more comfortable than had it been inside the ornate Biltmore House, stood a 1901, leather-topped, Gustav Stickley library table, model # 419.

Apparently, even George Washington Vanderbilt could be smitten by one of Cupid’s Arts and Crafts arrows.

Next Monday: I follow the footsteps of George Vanderbilt to Buckspring Ridge. 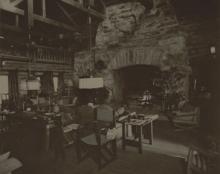