It was one of those Tuesday afternoons when it was just too nice outside to stay in the office. Since we are now getting several of those days here in Asheville, I always keep a notepad next to my computer where I jot down errands I need to run — in other words, excuses to close the lid on the laptop and slip out the side door.

On this particular day I knew exactly where I was headed: Mount Pisgah, elevation 5,722 feet, approximately thirty miles up the winding Blue Ridge Parkway. Known as America’s longest national parkway, construction on it began in 1935, but the final stretch of its 469 miles was not completed until 1987. Owned by the National Park Service, the Blue Ridge Parkway winds its way through the mountains of Virginia and North Carolina, offering visitors spectacular views from the many scenic overlooks dotting the roadside — views unobstructed by any billboards, advertisements, neon motel signs, or glowing convenience stores.

The drive was a steady uphill climb from my small farm nestled in the Cane Creek Valley, as my aging pickup truck soon let me know. Nevertheless, on this particular day I saw several determined bicyclists making the laborious climb up the twisting, two-lane blacktop toward Mt. Pisgah. For them, the most dangerous stretches up the parkway were the narrow, dark tunnels the W.P.A. workmen had blasted through the granite mountains. Meeting a downhill driver still wearing his sunglasses but without his headlights on has to be a harrowing experience for them.

My destination this sunny Tuesday afternoon was Milepost 407, also known as Buck Spring Gap. By 1895, the year young George Vanderbilt moved into his 250-room Biltmore House, he had purchased all of the land between his back door and Mt. Pisgah nearly twenty miles away, eventually totaling 146,000 acres and including a narrow ridge the locals had named Buck Spring Gap. This ridge had a special attraction to George Vanderbilt, for it offered panoramic views in nearly every direction, along with spectacular sunrises and sunsets.

I pulled into a nearly deserted parking lot off the parkway, grabbed my camera and water bottle and started up the well worn but unmarked trail leading through a dense thicket of rhododendrons. At the crest of the ridge the park service had cleared away the rhododendrons, junipers, and maple trees, opening up the same views that George Vanderbilt would have shared with his saddle-weary guests, sliding down off their sweaty horses.

Standing there, I could easily understand why George Vanderbilt loved coming up to Buck Spring Gap so much that he decided to build yet another retreat here, this one an ultimate Adirondack style hunting lodge, although I haven’t read that George and his Manhattan friends and family were particularly into hunting. Only a few photographs of the interior have survived, but they reveal a home any Arts and Crafts enthusiast would love to experience: fieldstone fireplaces, vaulted ceiling, post-and-beam construction, and a combination of both rustic and Arts and Crafts furniture (not to mention a full staff of servants — nice touch, George).

George and his wife Edith loved coming up to Buckspring Lodge, as they named it, so much that when plans were made to sell nearly 90,000 acres of land to the United States government for what would become Pisgah National Forest, the Vanderbilts drew a line around Buckspring Lodge and 500 acres, declaring it off limits. It was not until 1950 that their heirs were persuaded to sell the land and lodge to make way for another section of the Blue Ridge Parkway. The Park Service administrators, however, saw no need for the aging, out-dated Adirondack lodge, and no practical way of either utilizing or preserving it, so in 1961 it was razed, leaving only portions of the foundation as any clue to Buckspring Lodge.

I remained there for several minutes that sunny afternoon, walking amid the moss-laden remnants of the stone foundations, taking my time, enjoying the views and the quiet solitude, watching a red-tailed hawk floating on the updrafts, unsure which I would most likely enjoy: a well-preserved Buckspring Lodge — or an unspoiled Buck Spring Gap. 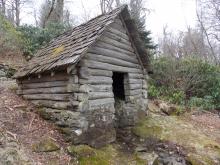 Do an ordinary thing with excellence.

Bottom Photo: The only surviving original structure – the spring house.