Getting Around the Grove Park Inn

With the National Arts and Crafts Conference just two months away, we’re getting questions about the differences between the three sections of the hotel. This seems like a good time, then, to quickly review just how the 510-room Grove Park Inn is laid out.

When it opened in Asheville, N.C. on July 12, 1913, the six-story granite structure featured four floors of guest rooms above the two-story Great Hall, which — with its two massive fireplaces — is still the heart and soul of the hotel. Floors three through six featured approximately 150 rooms furnished with Arts and Crafts furniture made by the Roycrofters and the White Furniture Company.

Referred to today as the Main Inn (pictured at bottom of page), these rooms have since been refurbished several times, but still contain some of the original furniture, as well as more recent reproductions in the Arts and Crafts style. While smaller than the newer guest rooms in the adjacent wings, these rooms have the advantage of being located in the center of the hotel.

In 1988 the Vanderbilt Wing opened (center picture), pushing the number of guest rooms to 510 and adding another indoor parking garage, six more meeting rooms, and yet another large ballroom. The Grand Ballroom and adjacent meeting rooms on the 8th floor host all three Arts and Crafts shows: the Antiques Show, the Contemporary Craftsfirms Show, and the Books, Magazines & More Show.

Both the Sammons Wing and the Vanderbilt Wing are so seamlessly connected to the central Main Inn that people cannot easily tell when they are leaving one wing and entering another. And it takes only five minutes to walk from any wing to another, never going outdoors.

For these reasons and more, all three wings have a strong following, so the staff at the Grove Park Inn cannot guarantee requests. They do, however, pay attention to special requests on each reservation, so if you have a decided preference, you can call (800) 438-5800 and have it noted on your reservation for 2016.

Since so many people attending the National Arts and Crafts Conference have a specific room in a specific wing which they prefer to stay in each year, this year the hotel has made it a policy not to accept reservations for 2017 until starting at 8:00am on January 5th. It used to be New Year’s Day, but staffing on the holiday became a problem, so the starting date for reservations for the February 17-19, 2017 30th Anniversary Arts and Crafts Conference has been moved to 8:00am on Tuesday, January 5, 2016.

Special room requests are filled in the order in which they are received. If a room which you have requested has already been assigned, the staff will work hard to assign you to the nearest comparable room.

As always, if you have any questions, do not hesitate to call Alex or myself at our office (828) 628-1915 or send me an email at bj1915@charter.net. Since I am often on the road, I generally respond to emails faster than phone messages! 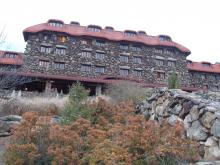 Something in the Mail for You