Ken Burns and The Roosevelts on PBS

Ken Burns and The Roosevelts on PBS 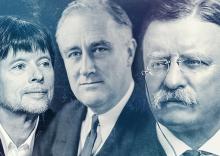 If you missed the first segment of Ken Burns’ seven-part PBS series entitled “The Roosevelts” that started last night, then you have to jump in tonight and catch the next one, for you will not be disappointed. As was pointed out in the introduction, Theodore and Franklin Roosevelt occupied the White House for 19 of the first 45 years of the 20th century.

And Theodore Roosevelt is the closest we have to a true Arts and Crafts president.

Like his later distant cousin, Theodore Roosevelt was born to privilege, the family fortune having been made in Manhattan real estate and banking. They were rich Republicans, living in splendor in Oyster Bay, NY, isolated from the economic recessions which plagued the nation. Thin and fragile, Theodore was not expected to live as a child. Suffering from a severe strain of asthma, he learned to protect himself with words rather than fists, but overcame his frailty with exercise as he grew to become handsome. Highly competitive, charming, energetic, and charismatic as a young man, he also was drawn to books, reciting poetry to his dates at Harvard.

Franklin Roosevelt was also born to privilege, but his branch of the Roosevelts were wealthy Democrats living in equal splendor in Hyde Park, NY. The two branches always remained somewhat suspicious of the other, primarily because of their political differences. Like his distant cousin, Franklin also suffered as a child, nearly dying at birth when the doctor administered too much chloroform to his mother. He was an only child, adored not only by his mother but also by his entire family.

At age 23, Teddy Roosevelt became the youngest person ever to be elected to the New York state assembly, where he fashioned a reputation as an eloquent reformer, attacking corruption within his own party as much as in the opposition. But a few years later, as his political career was skyrocketing, his beloved wife died giving birth to their daughter. And on the same night, in the same house, his mother also died. He never spoke of his wife again, not even to his daughter. “The light has gone out of my life,” he wrote. Teddy turned his infant daughter over to his sister to raise and struck out for the Badlands of North Dakota, where he built and lost a fortune in cattle ranching.

But when he returned East and again entered politics, he was a changed man, one who now knew the hardships faced by common men and the fragile beauty of the lands which he would later fight to preserve as national parks.

Theirs are two fascinating stories of men who shaped the future of our country, and the series promises to be as well handled and presented by Ken Burns as anything he has already done.