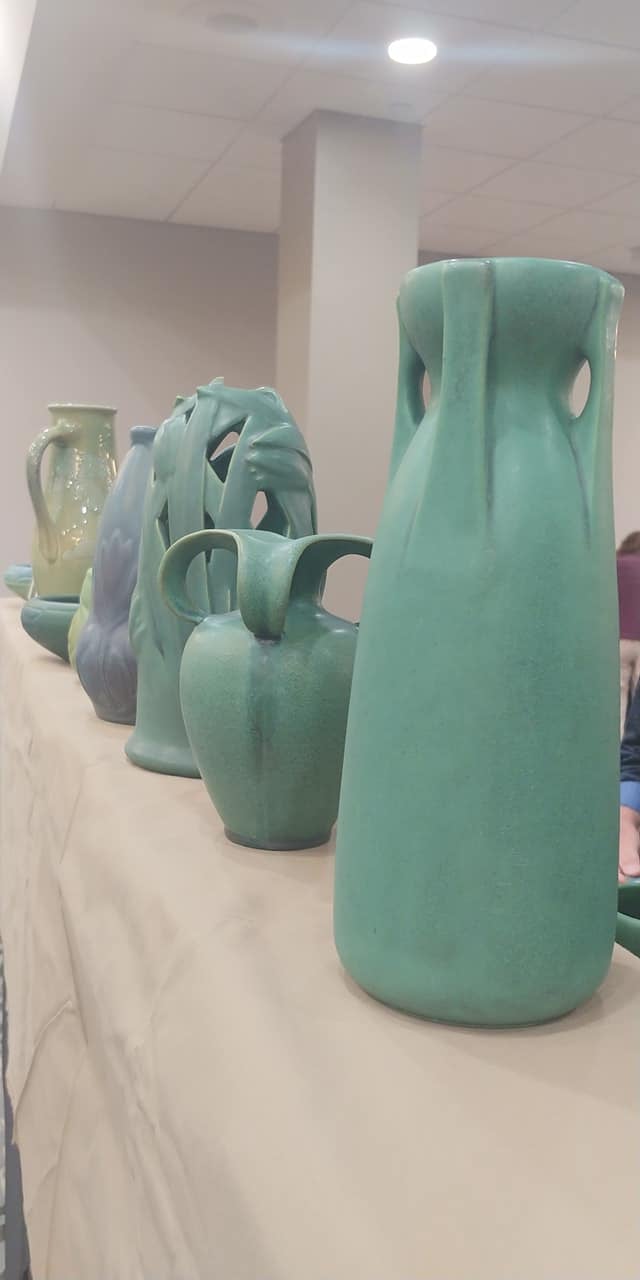 In an attempt to understand art pottery from its most basic level, I jumped at the chance to enroll in a studio pottery course at the Asheville-Buncombe Technical college during the month of April. Much like any fresh student to the world of pottery, I was in for a number of lessons in basic wheel throwing. Arriving to class bright-eyed and bushy tailed, complete with apron and a notebook to record glaze formulas, I came optimistic and left with a churning mind over how much there was to learn – both mentally and physically – about throwing on the wheel. I spent the first half of the class talking with the other students only to find out that I was one of two women out of the eight students without any prior experience in throwing. Pottery is a skill that takes months of practice and skill development to grasp the concepts – and even the hand movements – of wheel throwing: I found that centering clay on the wheel (the act of ensuring that the ball of clay is properly centered on the rapidly spinning wheel) is the most important concept for potters to learn and the best way to ensure a vase uniform in size. Experts will tell you it takes a lot of time and energy to get comfortable with the wheel: it took four classes for me to get the idea of centering down consistently. 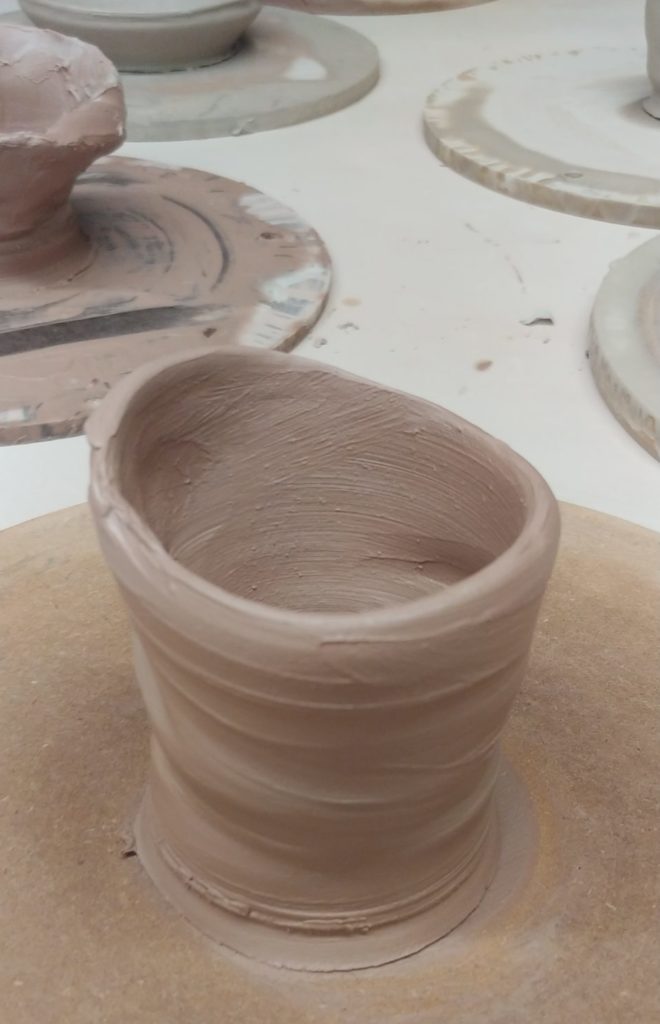 My first attempt at a cup. It’s still standing!

My instructor said to her group of students “If you have a cup that is still standing, then you’ve succeeded — even if it’s more like a planter bowl than a cup.” I’m happy to report all seven of my works created in this class are standing, however odd they might look. Working with a wheel requires a potter to do a number of things including, but not limited to: applying the right amount of pressure and control with your hands while molding; sitting as close to the pottery wheel as you possibly can as the gap between you and your wheel can be problematic when creating your muscle memory of your form; making sure the wheel is spinning at an appropriate speed; making sure you are using the right amount of water for wetting and molding your clay; and other basics that you thought were a given and yet can slip your mind when you try throwing for yourself. And I didn’t even mention ensuring that the ball of clay properly sticks to the wheel and doesn’t ricochet off the metal plate when you turn power on and act as the world’s most terrifyingly massive and heavy bullet headed straight for someone’s face. Luckily, that has not yet happened to me. Yet.

All things considered, it makes sense to keep expectations low the first time. To minimize my risk, I kept the wheel speed at a medium low speed and gently cradled my hands around the soft clay. Both of which are mistakes. The wheel should be faster than medium low (I heard my instructor tell me “faster” over and over again) and your hands should be stable around the clay; your left hand acting as the guide, the right hand actively putting pressure on the clay to manipulate it, bringing the form to its true center on the wheel. Your hands must manipulate the clay, the clay should not manipulate your hands.

Here’s the thing: the touch of wet clay is incredibly relaxing, almost therapeutic. Cue THAT pottery wheel scene from the movie “Ghost.” But your hands must stay active. If you are attempting to move the clay upwards and eventually back down into the centered dome, pressure from both hands must be applied using pinky fingers to continually make a seal between the clay and the metal wheel and simultaneously using your palms to squeeze the clay into a skinnier shape before bringing your thumbs down upon the entire shape to create a perfectly centered clay “tuna can” shape.

And that’s just the act of centering. Step one of the creation of a cup.

It’s not that I’m discouraging anyone from trying wheel pottery. Having gone through a whole month-long course creating what I call my little devil dwarf set – or works that are short, stubby, and have a textural personality – it’s a fantastic feeling knowing that you’ve made something. Engaging in a craft tradition that goes back tens of thousands of years ago into the B.C. era, participating in the simple and yet not so simple act of crafting with your hands is coming back into style. Even Hollywood actors are getting into the act of creating ceramics.  I just think of the countless examples of art pottery sold in auctions for tens of thousands of dollars for its perfections and the legacy of its creator. Do we know what Adelaide Robineau’s first tries looked like? William Grueby’s? Arthur Baggs’s?

During the last class before I headed to Cincinnati, I glazed my cups and small bowls and carefully arranged my devilish dwarven works to be placed in the kiln. While my cups and bowls continue to finish in the kiln, I continued my month of pottery appreciation by going to the AAPA Convention and shows.

For those of you who have not been, pottery dealers like JMW Gallery, JustArtPottery.com, Paul Katrich, Oberkirsch Designs, Roseville Pottery, and other pottery dealers from around the country were present in Blue Ash, Ohio’s Embassy Suites event room to sell a variety of antique names and contemporary pottery. On the Friday night preview for AAPA members, the spirit of community was strong as pottery collectors reconnected with favorite dealers and each other and shopped the selections of Roseville, Teco, Grueby, Saturday Evening Girls, Weller, and contemporary-style ceramics. Tables loaded with vases, tiles and other ceramic works stood among those curious buyers who were all smiles, happy to see each other in person.

Among those present at Friday’s preview were members of the AAPA, Don Treadway, George Hibben and tour guides from the Rookwood Pottery factory. Collectors and first timers to Cincinnati buzzed about having an exclusive tour of Union Station, the shock of realizing how large the Rookwood Factory was, and the new facts gleaned from the earlier seminars on Overbeck pottery, new stories and research on the Rookwood Pottery legacy and the Newark Museum’s pottery collection through the eyes of its chief curator, now retired, Ulysses Grant Dietz. Earlier on Friday, the artist Teri Kern held demonstrations on a studio pottery wheel (much like the one I used in class) in a session titled “Can You Throw A Pot?”

When all is said and done, the events of the past two years have changed the face of planning conferences and selling shows. Within this transition year, the odds that a percentage of collectors will continue to stay home is undeniable. However, standing in that room on Friday night, it is clear: the people in that room are invested in supporting the dealers who provide these antique vases or contemporary artists who spend their life creating like the artists that came before. That’s how a legacy is continued on – through community. 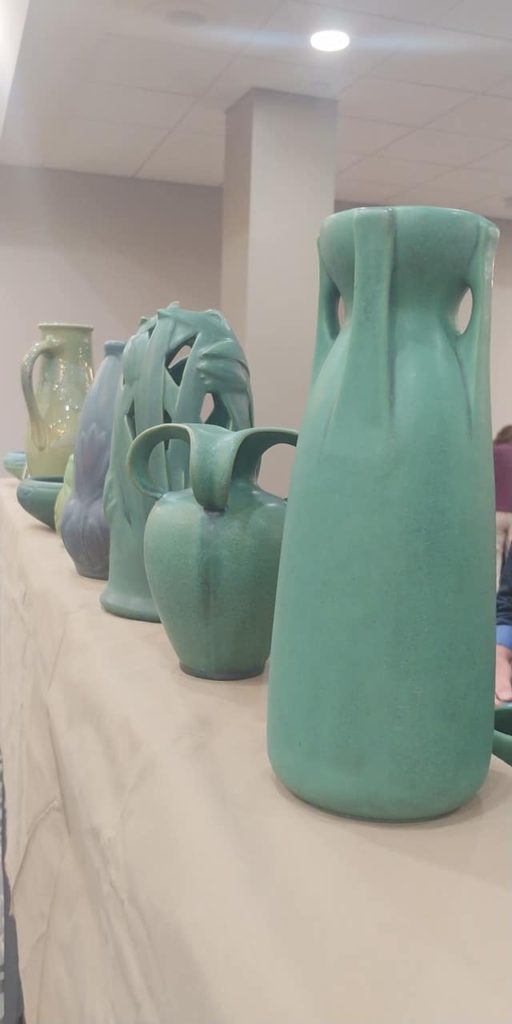 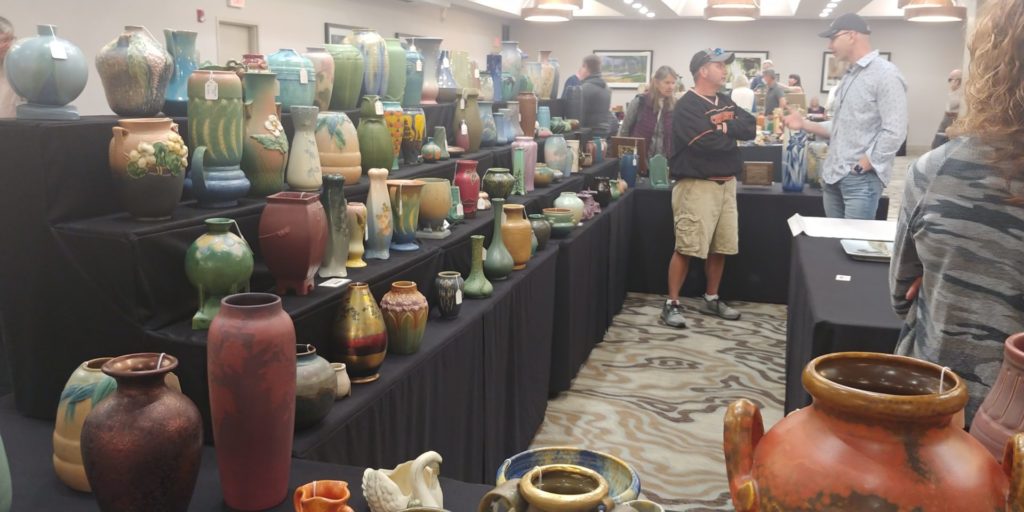 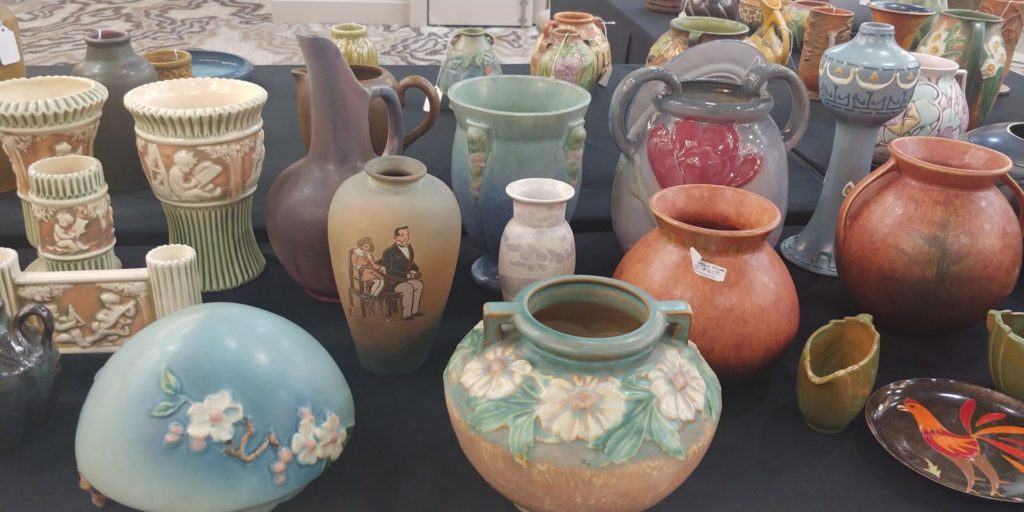 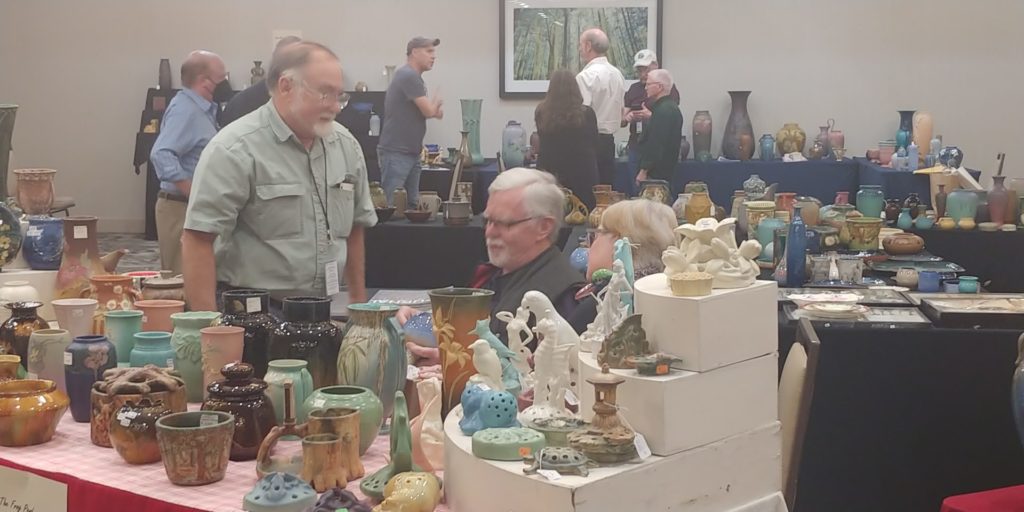 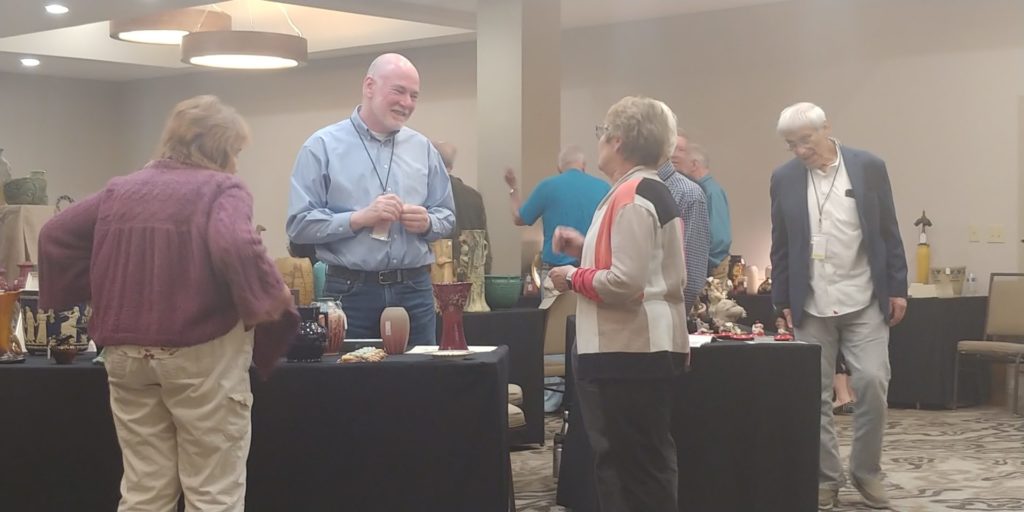 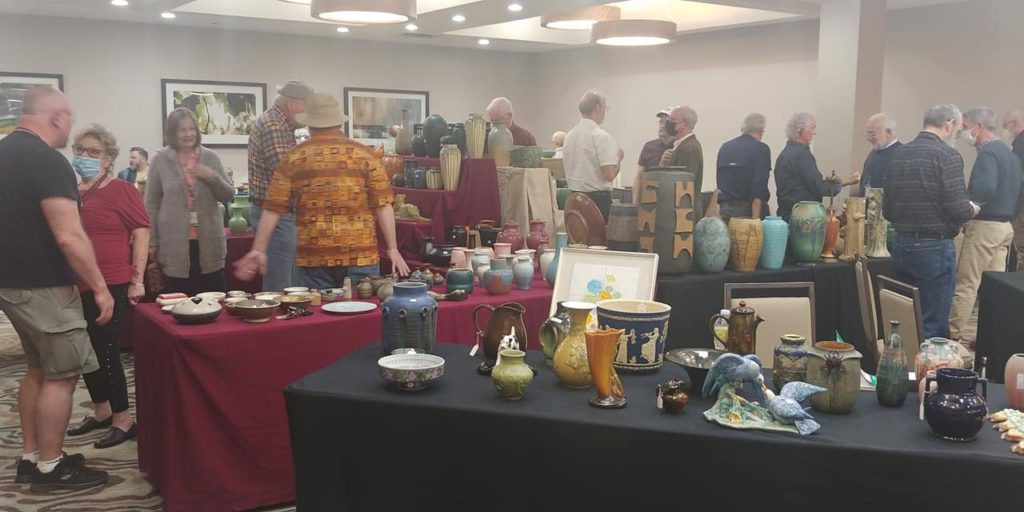 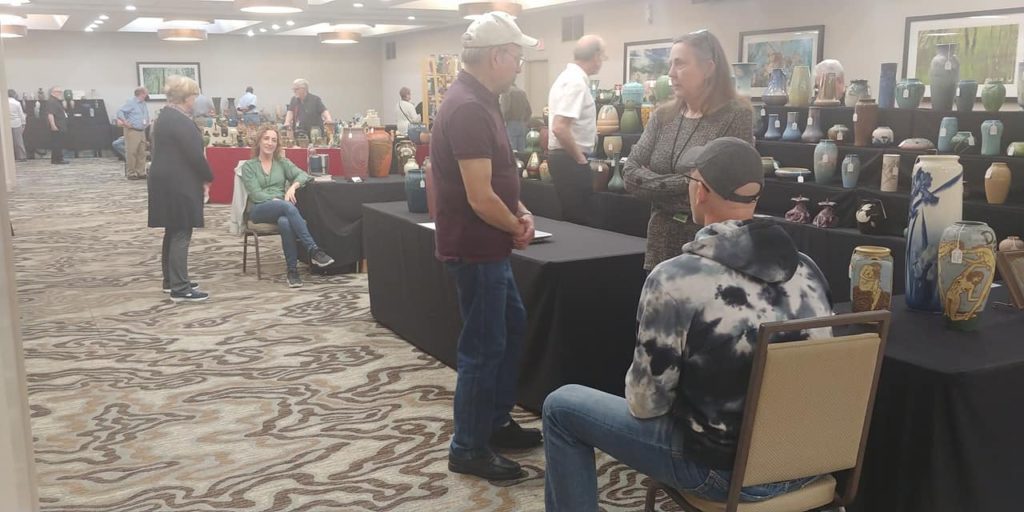 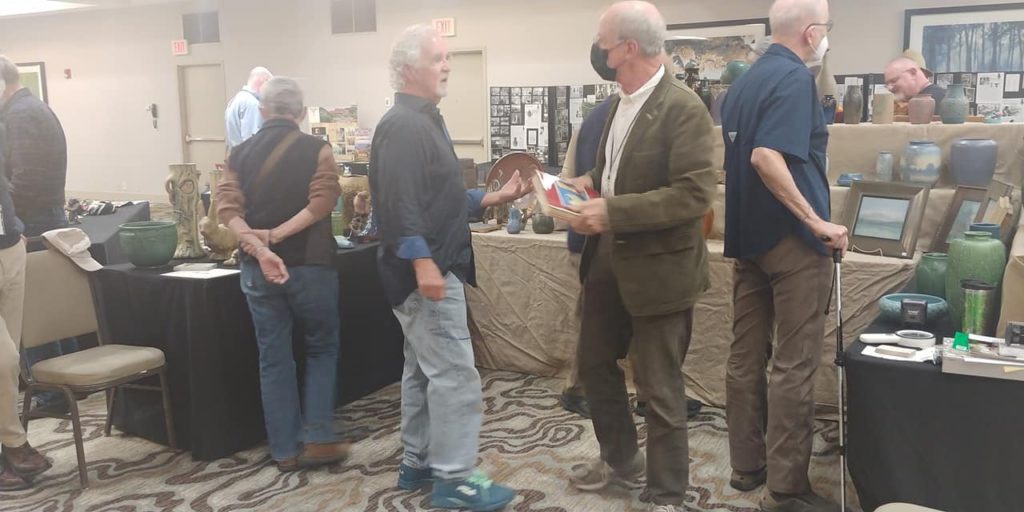 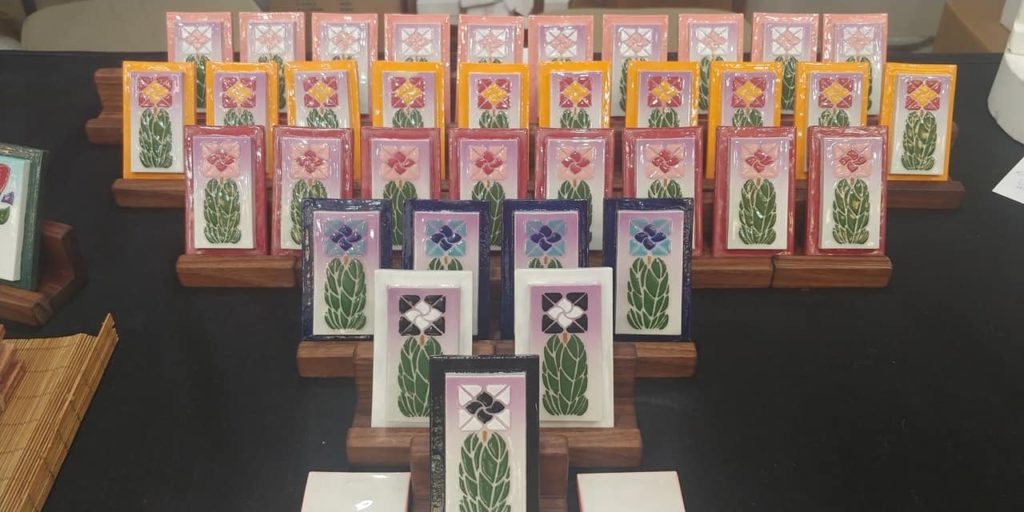