It has often been said, but certainly bears repeating: The best little journeys are often taken in our own backyard.

Leigh Ann and I recently returned from a two-week vacation during which we took daily jaunts in our rental car out through the countryside, each morning heading off in a different direction. We stopped at small towns, strolled through art galleries and antiques shops, checked out a few museums, ate at outdoor cafes, had dessert in the middle of the afternoon, bought a new bottle of wine to taste that evening, and arrived back at our lodging delightfully exhausted.

Once back home, we looked at each other and asked the obvious question, “Why don’t we do this from our house?”

And so one day last week we played tourists here in Asheville, strolling through downtown stores and galleries, eating crepes at an outdoor café, checking out the exhibits at the art museum, hitting a few antiques shops, and then picking up a new bottle of wine and a couple of steaks for dinner on the way home.

Afterwards I also realized that in recent months I have conducted research for my books and articles in the cities of Washington, East Aurora, Iowa City, Syracuse, Cedar Rapids, and Davenport, overlooking — or at least postponing — some historic information stored right here in my own backyard.

So, last Wednesday I caught up on my most pressing deadlines, set aside some menial tasks, and headed for the five 1917 stuccoed buildings that comprise Biltmore Industries, an Arts and Crafts cottage industry formed and financed in 1905 by George and Edith Vanderbilt. Originally named Biltmore Estate Industries, it began as a woodcarving club for children of the employees who worked on Vanderbilt’s 125,000-acre Biltmore Estate, but grew to include woodworking and the weaving of homespun cloth on hand looms, all under the direction of Eleanor Vance and Charlotte Yale, two Presbyterian missionaries trained in the Arts and Crafts style.

In 1917 Frederick L. Seely, general manager of the Grove Park Inn, bought Biltmore Estate Industries from the widowed Edith Vanderbilt, constructed the five workshops and showrooms adjacent to the famed hotel, and moved the oak looms, woodworking equipment, and employees into what he renamed Biltmore Industries. For the next ten years Seely managed both businesses, then left the Grove Park Inn in 1928, but guided Biltmore Industries through the Great Depression until his death in 1942.

The woodworking department was gradually phased out, but the weavers continued to make homespun cloth for men’s and women’s suits (most famously worn by First Ladies Grace Coolidge, Lou Hoover, and Eleanor Roosevelt) until the 1970s. Since then four of the five Arts and Crafts buildings have been transformed into an automobile museum, a restaurant, a museum and artisan workshops, and the award-winning Grovewood Gallery.

So important are these buildings, their Arts and Crafts heritage, their Roycroft antiques, and their successful transformation that we include free daily walking tours of them during the annual National Arts and Crafts Conference, this year being held February 20-22 at the Grove Park Inn.

I left Biltmore Industries after a day of reading old documents, wandering through the buildings, walking about the grounds, and stepping back in time, back to the Arts and Crafts era.

All in my own backyard. 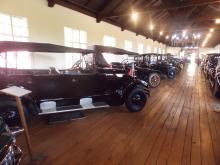 Top: One of the woodworkers making a table based on plans in Gustav Stickley’s The Craftsman magazine.

Middle: The museum at Biltmore Industries, along with artisan workshops.

Lower: One section of the automobile museum.

Building Your Own Network