It was not how I had intended to spend my weekend.

Not that I have ever intentionally modeled my life after theirs, but I have known for many years that when Elbert Hubbard needed to relax, he escaped to a small cabin his son Burt had built outside of East Aurora. Unfortunately, nobody is sure what became of it, or even where it might have been.

When Gustav Stickley was living in Manhattan, he, too, longed for a place where he could retreat to escape the pressures of being a furniture manufacturer and magazine publisher, so he built a cabin for himself as well, only instead of being in the woods of upstate New York, he built his over in New Jersey.

Now some might say there was no real difference, except we know what became of Gus’s log cabin at Craftsman Farms.

And so on a Friday afternoon in the summer of 1996, I fell prey to the lure of an empty lot on an idyllic little mountain lake twenty miles south of Asheville, called, quite naturally, Lake Lure (a.k.a. Dirty Dancing and Last of the Mohicans).

I awoke the following morning with a severe case of buyer’s remorse, but to make a very long story short, I took two years and built a small cottage there myself.

And so last Friday afternoon Leigh Ann and I were sitting on the deck when we heard the first of five plaintive cries.

We looked at each other, and we both knew: a trapped baby deer.

It was in a couple feet of water, struggling to escape a vicious muskrat clinging to its neck, trying to drown it before dragging it off into its den. Leigh Ann scared off the muskrat while I jumped into the water, handing the limp fawn up to her, then jumping out myself to avoid one really mad muskrat with really sharp teeth.

The two-day-old fawn was unhurt, but exhausted and weak. We wrapped it in a towel and Leigh Ann, a veterinaran and certified wildlife rehabber, went into action, immediately informing me of every possible injury, disease, malfunction, illness, birth defect, side effect, hereditary disease, television commercial, complication, and potential lawsuit a new fawn could carry.

(Sometimes ignorance is bliss, which explains why I am always so happy.)

However, she did know what formula to get and how often we needed to coax this little guy (she was going to be Pearl until he peed down my chest while I was holding him) to eat. And she stayed up most of the night worrying and caring for him while, naturally, I slept.

The following day I was determined to reunite this fawn with its mother, also knowing that the mother might be deceased, departed, or simply uninterested in raising this little rascal, who immediately started following us around the cottage like a goofy puppy, already convinced we were his parents and anxious to pick out a really expensive college program.

And so at dusk I carried the yet unnamed fawn wrapped in a towel up the hill to a mountainside meadow above our cabin where deer are known to frequent. While the fawn played in the tall grass like a kid at the park, I stayed upwind from the worn trail leading out of the woods. Forty-five minutes and a dozen red ant bites later, it happened: a nursing doe glided soundlessly out of a thicket of mountain laurel into the open meadow. I picked up the eight-pound fawn and gave him just enough of a little squeeze to get him started squealing.

The doe took a few steps toward us, so I carefully put the fawn down and started backing away. Of course, the fawn did the natural thing: he turned, ran, and hid between my legs.

Finally, the doe looked at me as if to say, “You keep the brat,” then turned and disappeared back into the woods.

It should have been a Disney Moment: the doe steps forward, the fawn rushes up, and immediately begins nuzzling his mother as the two glide back into the woods together, reunited, smiling back at me, then waving.

Okay, so no wave.

Instead, I have this goofy little guy looking up at me and saying, “Can we go back to the cabin now, Dad? I’m hungry.”

I’ll bet this never happened to Elbert or Gus.

Tune in next week and we’ll all find out what happens. 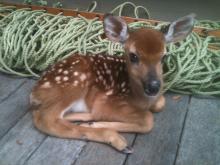 Thanks for stopping by,

PS – Our male fawn needs a name, so go to our Facebook page, check out the additional pictures, and make a suggestion. (Yeah, I know it’s just a deer, but it’s a cute deer.)

Top photo: The fawn five minutes after being pulled from the lake.

Middle photo: Waiting in the meadow for his mother.

Lower photo: On the deck, feeling pretty good about now.