If you’re tired of reading graduation columns this month, then I suggest you check out something else, for I have had two graduations this month and am feeling very proud and very fortunate.

Those of you who have attended any of the National Arts and Crafts Conferences at the Grove Park Inn since 1988 may well have met both of my sons. Eric (top) was born just three months after our first Arts and Crafts Conference 29 years ago, and attended every conference until he left for Centre College in Danville, KY in 2006. Blake was born in 1992 and, like his older brother, attended and worked at every conference until he headed off to Georgetown in 2010.

After graduating from Centre in 2010, Eric elected to go West, enrolling in the doctorate program in chemistry at the University of Utah in Salt Lake City. After two years of coursework he moved into the lab, beginning work on a series of mystifying experiments involving microscopic molecules and pulsating lasers that slowly evolved into three published papers and his doctorate thesis, “Spectroscopy of NiCCH and OsSi, and the Bond Energies of VC, VS, and VN.”

His graduation “hooding” ceremony took place two weeks ago, so we all had a great long weekend celebrating along with him. His next step: teaching chemistry at the college level.

After graduating from Georgetown, Blake headed north to Harvard, where he just earned his Masters in Public Health. And so we then flew to Boston for a whirlwind two days of receptions, dinners, toasts, and ceremonies, one of which was held on a beautiful warm day beneath leafy maple trees on the grounds of Harvard Square. Of course, it was general seating, so I arrived at 5:50am and found thirty other parents ahead of me, already standing in line for a 9:00am opening.

Blake’s graduation was capped on Friday morning with a douse of reality: cramming everything he had not sold from his second floor apartment into an SUV, which his mother volunteered to drive with him back to Asheville, while I boarded a flight out of Logan Airport. After six years away, Blake is returning to North Carolina, having selected the University of North Carolina at Chapel Hill for medical school, which he will start on August first.

Needless to say, one thing both of my sons have in common is a very proud family, especially their father, soon to be the only one at our dinner table without a doctorate degree. Their grandfather, who turns 91 in January, graduated from high school, then went to work, joining the Navy after the attack on Pearl Harbor. He returned to his small hometown, where he literally had one career, one wife, and one house, where he and my mother still live today.

I graduated from Western Illinois University with a teaching degree and also went right to work. A high draft number saved me from going to Vietnam; several of my classmates were not as fortunate. Back then my father and I didn’t always agree on politics, and I didn’t work as hard as I could have to bridge our differences.

But ever since my two sons left for college, they didn’t let any of our petty differences stand in the way of staying close. To this day, they call me two or three times a week. We don’t always talk for long, as its often between classes or at a bus stop, but we each leave reassured just by hearing the other’s voice.

As for me, well, thanks to my sons, I now pick up the phone more often than I used to, and call my dad.

To Eric and Blake,

Thank you – for teaching me a valuable lesson. 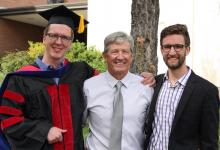 And until next Monday,

Thank someone who made a difference in your life.

Tales from the Past