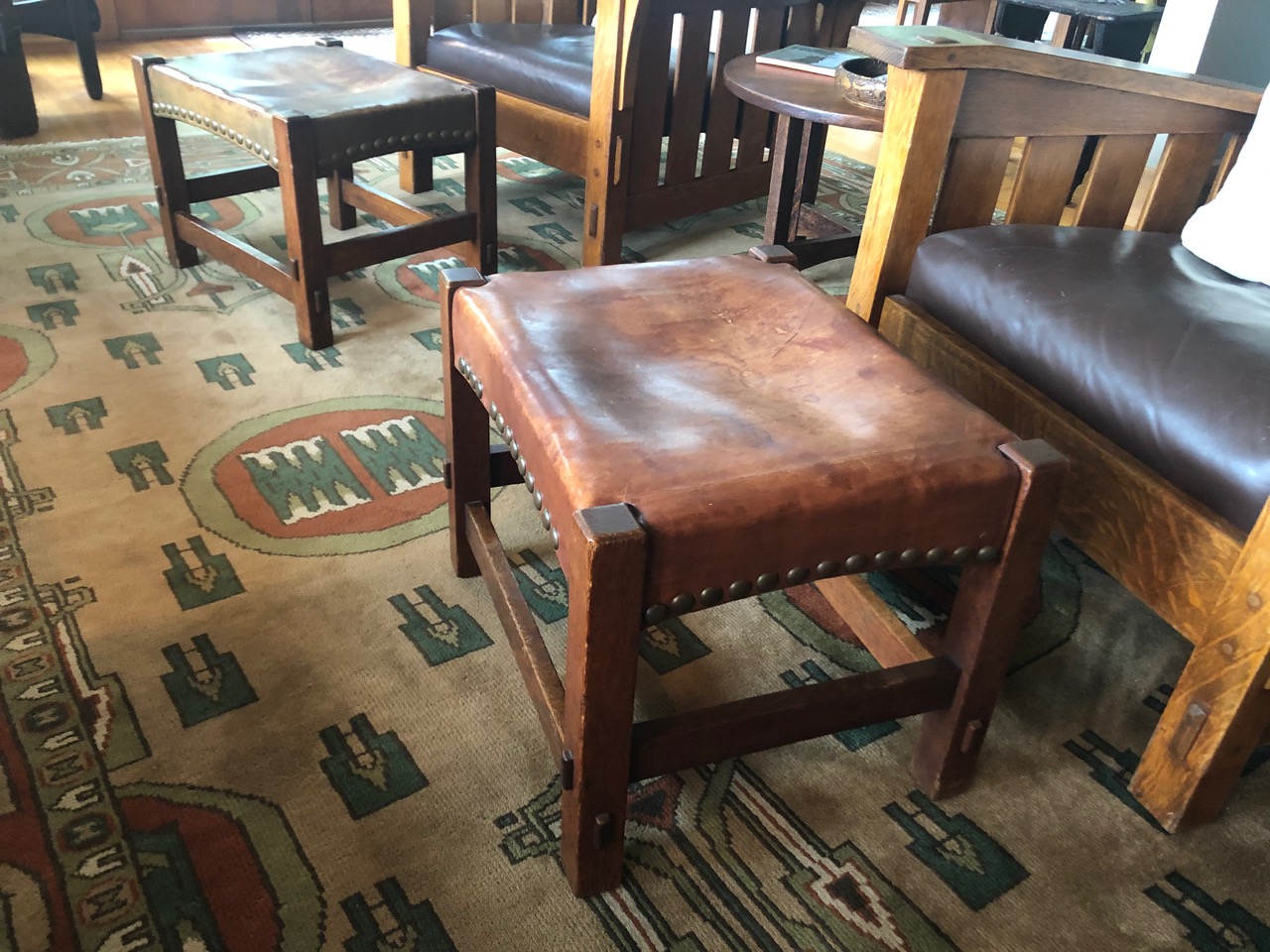 Reading this week’s story about the 1901 Gustav Stickley Morris chair which sold for nearly $50,000, largely due to the fact that it still had its original finish and original leather upholstery, reminded me of two experiences I have had with Stickley pieces and their original finish.

Years ago, when I lived in Iowa City, I owned Knock On Wood Antique Repair & Restoration and managed the Iowa City Antiques Mall in an old brick warehouse I had restored on Gilbert Street. I also had begun collecting Arts and Crafts furniture, pottery, textiles, and metalware. At that time, I believe there were only two other individuals in all of Iowa City with the same interest as mine, so word soon got around that I was buying nearly anything that was brown, heavy, and pegged. 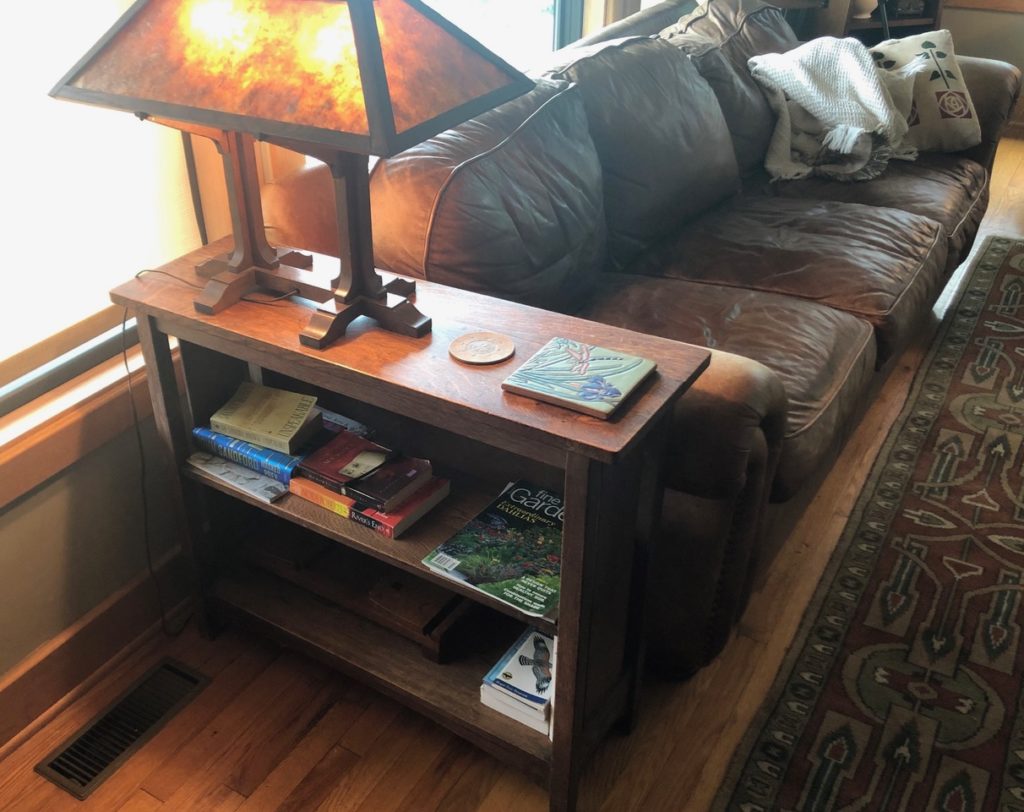 One day I received a call from a woman who lived about thirty miles away and who had what turned out to be an L. & J.G. Stickley magazine stand. She mailed me Polaroid pictures of the stand, which I could tell still had its original dark finish. She named her price and I accepted. During our calls we chatted about the weather, farming, old stuff, and family heirlooms, until I finally had to beg off and get back to work. I had a busy week ahead of me, so she and I agreed I would pick up the magazine stand the next weekend.

That Saturday afternoon I tossed a couple of clean packing blankets into the back of my Ford Econoline van and headed through a sea of tall, green cornstalks toward Muscatine and the Mississippi River. The lady greeted me with a smile from her long gravel driveway and proudly led me around to her back porch where she had created a stage for my Stickley magazine stand.

Except what I was looking at now was a Golden Oak magazine stand.

Interpreting my speechlessness for amazement, she proclaimed, “You were such a nice man to me over the phone that I decided to refinish it for you.” 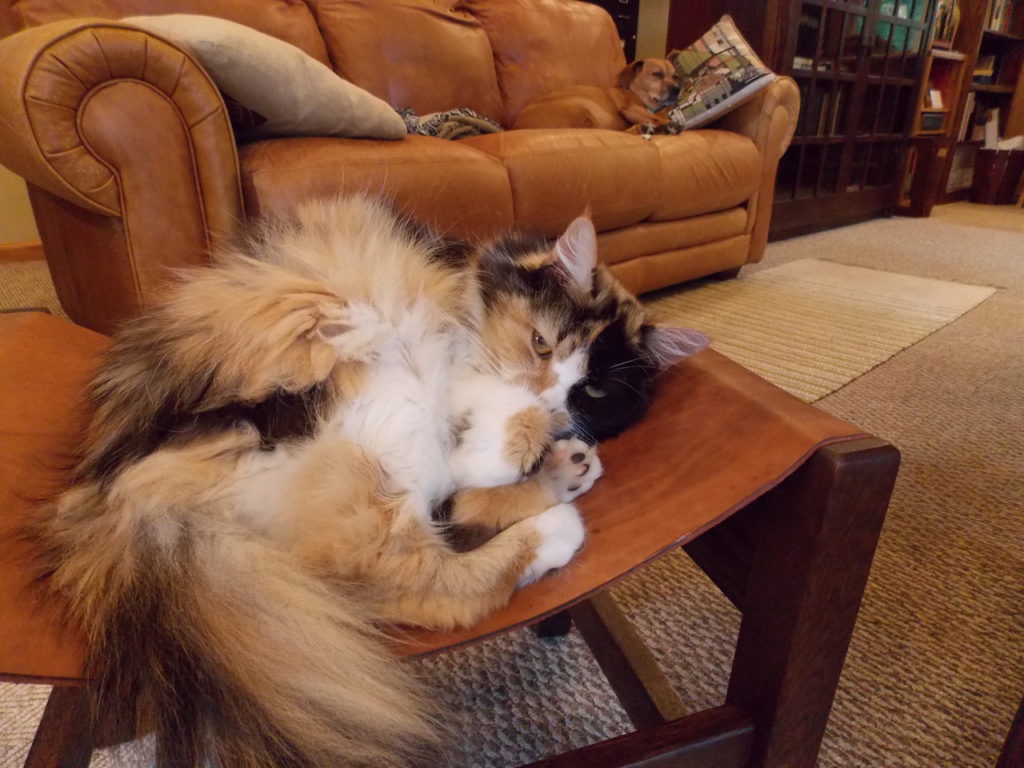 Years later, I was fortunate enough to discover in an antique shop a Gustav Stickley model #300 footstool, which also had its original finish, a delicate red decal tucked inside one of the stretchers, and its original leather seat and brass tacks.

I proudly carried it home and placed it in our living room, as it was a beautiful, pristine example of a through-tenon Stickley footstool.

As I stood there admiring it, our cat sauntered into the room, sniffed the footstool, and promptly launched himself up onto the top of the stretched leather, which he assumed was his new Arts and Crafts scratching pad.

I suspect the neighbors heard my roar as I raced over to rescue the dried, fragile leather from his needle-sharp claws. Our cat slunk away, scowling at me as he made his way toward the kitchen, while I tucked the footstool safely away in one of our closets.

For the next six months I would occasionally get the footstool out from the dark closet and admire it briefly, before our cat could get a whiff of the aromatic leather. Finally, I admitted that either the cat or the footstool had to leave, which really was no decision at all. 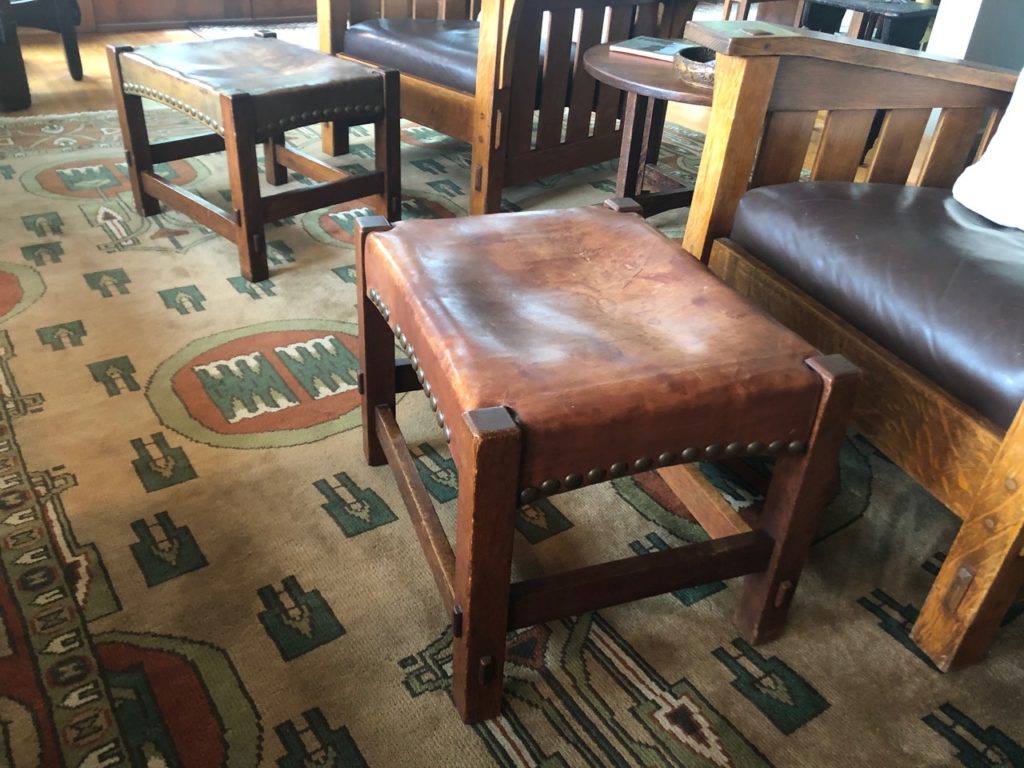 And with what I made selling the original footstool at auction, I was able to buy two examples of the same model, each of which came without their original leather. Since then we have been able to let our pets use the footstools, as well as our guests, without worrying over something happening to the new leather I had wrapped around them.

“In ancient times, cats were worshipped as gods. They have not forgotten this.” – Terry Pratchett 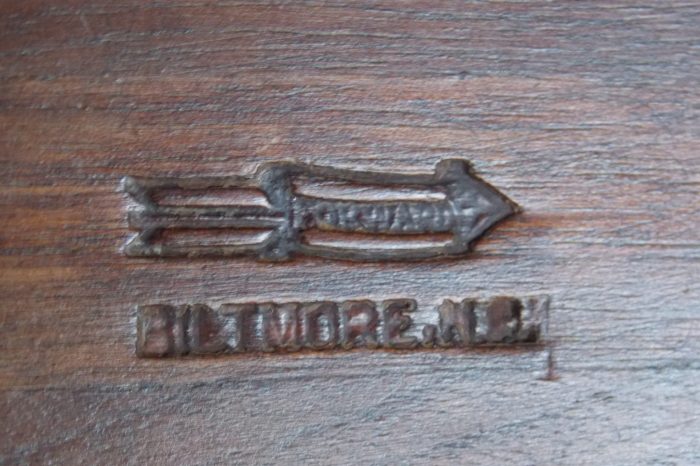