My latest little journey was just 400 meters long, but it took me nearly 500 miles to start it.

About this time last year I became very aware of the fact that in 2015 I was going to turn sixty-five, which I have since done without a trip to the trauma center or a therapist couch. Now, while I am still too busy to retire, sixty-five remains one of those milestone birthdays that causes you to stop and take stock of what you have done — and still are planning to do.

It’s also a birthday that causes you to look around the room to see if Father Time and the Grim Reaper are sitting at the far end of the table, rolling the dice. And while I have always tried to be aware of my health and my weight, as I was sliding out of the booth at Waffle House I noticed my jeans were feeling a little uncomfortable, especially around the middle. When the Eddie Bauer saleswoman cautiously suggested that I consider moving up one size, I got mad.

And so I did what I have always done before undertaking a project: I consulted Barnes & Noble. In one of the books I hauled home I found a chapter on something called the Senior Games: a series of competitive events for men and women over fifty ranging from bowling and tennis to basketball and track. In North Carolina the first round of competition is held in the spring on the county level, followed by the state finals in September, then the nationals for the top finishers.

When I was in high school I ran a respectable 400-meter race, even though we called it a quarter-mile back then. I never advanced beyond the conference finals, but I actually enjoyed the outdoor workouts and the one-on-one competition.

No one to blame but yourself if you failed to win.

And so, last summer I began running again. Actually, I began walking, then, a few weeks later, some jogging, then some light running on back roads, on a treadmill, and finally on the local middle school track. I had no way of knowing if I was ready or not, but on a warm Saturday this past May, I leaned over, took a deep breath, and waited tensely for the crack of the starter’s pistol.

Any hopes I had that day of jogging to the September state finals were dashed by lean, grim runners on either side of me, all of whom were taking it very seriously. By the mid-point of the race, however, my longer strides were eating up the track and I was able to hold them off at the finish line. Later, when Leigh Ann asked why I had kept on running, my answer was simple: I didn’t want to throw up in front of everybody.

This past Thursday I also joined 3,004 other senior athletes at the state finals in Raleigh, and I again wondered what I had been thinking as I leaned over, stared at my double-knotted shoelaces, and nervously waited for the gun, hoping I could at least start the race without throwing up. I was ranked number five in the 400-meter dash, so I was assigned lane five, with the four runners with faster qualifying times than me in the lanes to my left. The starter didn’t give us time to do anything more than shake hands and toe the white line before firing his pistol, and the next thing I knew I was already rounding the first curve, reminding myself to just settle into a smooth, steady stride — and stick to my plan.

The 400-meter dash is a tough race. Too long for us amateurs to run at full speed, too short for a distance runner to just lope to a win. My plan was simple: race the first hundred meters like a dash, ease back slightly for the middle portion, then have enough in reserve to sprint the last hundred. At the first 100-meter mark three runners were ahead of me, and I could hear the faster qualifiers nipping at my heels, but I stuck to my plan, eased up a bit, and took a few deep breaths.

I could see the leader was thirty pounds lighter than me and looked like he could run all day, which had me thinking I really should cut up my Waffle House credit card, but as we all eight rounded the final curve bunched together, the leader wobbled just a bit, giving me my opportunity. I reached down and found my reserve, bolted past him, and saw nothing ahead of me except fifty meters of beautiful, clear, empty track — and the finish line.

Afterwards, as we were all shaking hands and taking pictures, somebody asked, “Where are we headed for lunch?”

I knew where I was going to celebrate.

For the first time in a year, back at Waffle House.

Stick to your plan, but have an occasional waffle. 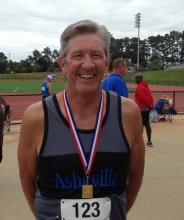 Top: A group of runners getting set for the 100-meter dash. Click to check out the head gear on #2.

Middle: Third heat of women getting their instructions for the early morning 1500-meter run. The woman in the red shoes won.

An Audience of One