Reflections on a Deck

While the Arts and Crafts movement cannot take credit for having discovered Nature, the reformers at the head of the pack did put a major emphasis on establishing a harmony between our lives and the outdoors. While some of those 19th century, Victorian mini-mansions had delightful wrap-around porches, they tended to be “above” the ground, whereas the wide front porches on the more modest Arts and Crafts bungalows were more rooted in nature.

But those bungalow architects always placed the most emphasis on the front porch, often only sticking a small covered stoop on the back side of the house. We later owners came up with our own way of bringing nature into our homes and our lives: the late 20th century deck.

I attached one onto the back of a 1920s bungalow I once owned in Durham, then later moved to a 1970s rancher outside of Asheville that already had a deck on the back. But by the time I moved in, the ends of the cedar deck boards were rotting, and needed to be replaced.

Between these two decks and a few others I have experienced, I have compiled a list of recommendations for anyone with a current deck or contemplating one.

First, do not underestimate the destructive power of the sun and wet leaves. The sun will quickly bake the life right out of all but a few woods, and wet leaves, especially oak leaves loaded with the same tannin that makes fuming possible, will leave semi-permanent stains after the next rain.

That fact makes choosing the best flooring material critical to the life and looks of your deck. I learned the hard way that not all pressured-treated lumber is of the same quality. Buy the premium grade, or expect the cheaper boards to warp, twist, buckle, split, and spew even two-inch screws across your deck.

As a widely-touted alternative to pressure-treated wood, the new synthetic boards can handle sunshine, but they stain just as easily as wood. Compounding that issue, many manufacturers advise against power washing, which is the only practical way I have found to remove tannin stains. After trying to scrub leaf stains off by hand with bleach, I finally resorted to a low pressure power washer. By the time I removed the stains, the false grain lines molded into the synthetic surface had also disappeared, as well as any resistance the synthetic boards had against future stains.

In both cases I bit the bullet and dug deeper into my wallet, buying ipe and tigerwood, both of which are now managed and harvested as crops in the Southern Hemisphere. These dense woods will wear out saw blades and drill bits, as screws cannot penetrate them without a pre-drilled pilot hole. But once installed they are as beautiful as a mahogany table top and equally as stable.

Even so, still do not underestimate the power of the sun and those nasty wet leaves, as they will soon leave their mark on even these dense woods. Protect them right away with an oil-based penetrating finish designed specially for decks, and plan to apply additional coats as soon as the reddish hue begins to turn even slightly grey.

The best applicator: a wide lamb’s wool mop head screwed onto a four-foot painter’s pole. It works the finish into the wood better than a paint roller, which leaves a wake of air bubbles.

And trust me on this: your wine will taste even better on a beautiful deck. 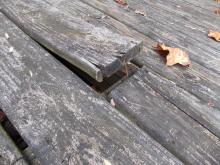 Note: Forgot what little you learned of Latin? Click here for a translation.