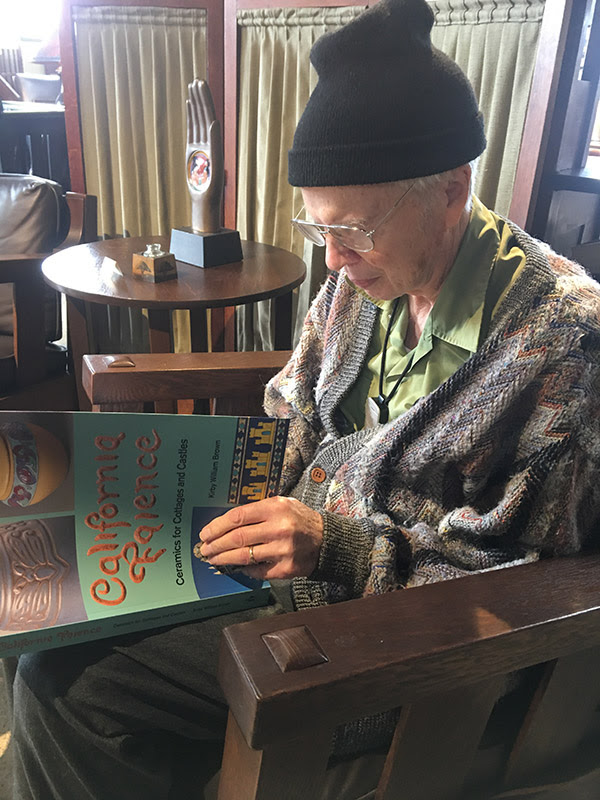 (this week, we’re giving this space to California Historical Design owner Gus Bostrom for his tribute to his colleague and friend, Kirby Brown)

About the time I opened my Berkeley, CA gallery in 2004, California Historical Design, I met Kirby Brown. He told me of his connection to his grandfather’s pottery, California Faience, and that he was working on a book on his grandfather’s pottery. 10 years later, he finally published the massive and comprehensive book California Faience, Ceramics for Cottages and Castles in 2015. I was able to introduce Kirby to my friend Charles Cunningham of Prepress in San Francisco and Charles helped Kirby publish his book. Charles had previously helped me publish both Bay Area Copper 1900-1950, Dirk van Erp & His Influence in 2012 and Dirk van Erp in 2014.

Kirby was able to coordinate the publication with an Exhibition of California Faience pottery at The Crocker Museum in Sacramento that subsequently traveled to the Pasadena Museum of California Art. His book is an in-depth and comprehensive study of his grandfather’s pottery studio.

Kirby Brown’s grandfather was William Victor Bragdon, one of the founders of California Faience. He grew up in his grandfather’s home and visited the pottery shop many times as a child. He was born in Oakland on June 14, 1940 and then his family moved to Berkeley where he graduated from Berkeley High School. From his California Faience book biography, A restless youth, he left home, worked in a garlic farm in King City, and explored jungles and collected insects in Panama for several years.

Upon returning from these sojourns, he met his wife Iran, settled down and eventually got his Ph.D. degree in Entomology at the University of California, Riverside. His career to him to Honduras working for a banana company, to New Haven as a museum curator for Yale University, and ultimately to Stockton, California, as Entomologist for the San Joaquin County Agricultural Commissioner. Not content with a ‘regular job’, he took up almond farming on the side.

With retirement, his interest turned to California Faience after meeting Peter Monsour who was actively researching the pottery. Peter eventually turned the project over to Kirby who spent the next 15 years of his in happy research…” 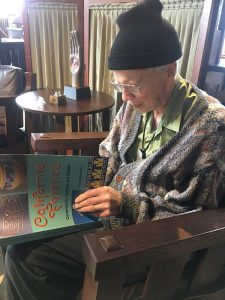 Two and a half years ago, Kirby asked me to help sell off a large portion of his collection of California Faience Pottery. We held the California Faience Exhibition and Sale as the final event of our Berkeley Gallery in August and September 2016 before we moved our gallery to its new location in Alameda, CA.

Six months ago Kirby confided in me that he was ill and that his cancer was terminal. He knew that he only had about six months left to live, but now that the chemotherapy sessions were over, he had a renewed strength and vigor to wrap up his affairs and make sure his wife Iran and his daughters did not have to deal with the tremendous amounts of material that he had collected over the years.

Kirby wanted us to act quickly, so we were at his house two days later gathering up his collection of California Faience ceramics. It was very emotional for everyone involved. It was wonderful spending time with both Kirby and his wife Iran that day in mid December. I asked Iran how they met. She said that she was visiting the summer camp where Kirby was studying and they fell in love… She was the most incredible support to Kirby as we were packing up his treasured pieces.

Two weeks later on January 5th of this year, we opened the second chapter of Kirby Brown’s California Faience Exhibition and Sale and each week we offered 50 pieces of his collection over the next 5 weeks. Kirby wanted his pieces to end up in the hands of people and collectors who cherish his grandfather’s work. He came to the gallery opening weekend, but that first event wiped him out. He missed the next two Saturdays that we were open. He was fiercely determined to attend the final two weekends. During week four, he arrived using a walker. The following final weekend, he was in a wheelchair.

So many of his friends and colleagues got a chance to come and say goodbye, especially his good friend Riley Doty of The Tile Heritage Foundation. Riley drove one and a half hours each way to allow Kirby to come the second to last weekend of our Exhibition and Sale.

He will be dearly missed, but his legacy will continue through the love and appreciation of California Faience Pottery and the anthology he produced entitled California Faience, Ceramics for Cottages and Castles. 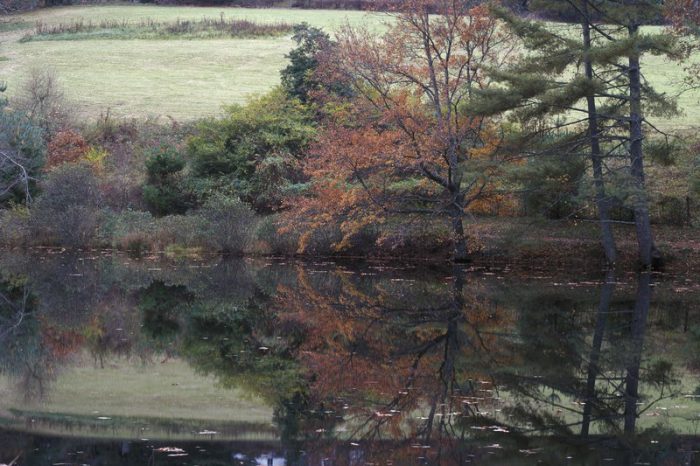 An Arts and Crafts Father's Day